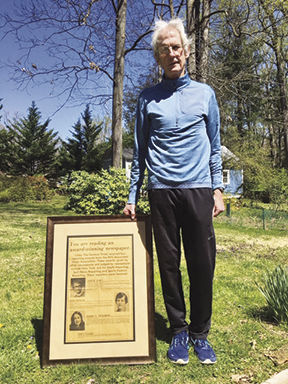 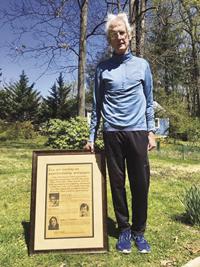 Due to the coronavirus and stay-at-home order in northern Virginia, I’ve had time to remember my early days as a sports reporter for the Finger Lakes Times, inducing cringes and shudders as memories come flooding back.

It would be tough to imagine a less prepared candidate when I reported to work in late November 1975, several months after losing an entry-level job in a prominent NYC ad agency. I was two years out of college and couldn’t type.

Furthermore, I may have set an NCAA record for requesting project extensions. Deadlines? They were mere suggestions.

Poor Norm Jollow would have his patience tested. The long-time sports editor was out of central casting. He could take notes on an electric typewriter with a telephone cradled between his shoulder and neck while simultaneously laying out pages and barking orders to the staff. All the while, he clenched a tiparillo with a plastic tip in his front teeth, smoke billowing through the corner occupied by the Sports Department.

(Talk about multi-tasking. It was a quaint era, before smoke-free workplaces, ergogenic office equipment, computers, smartphones, digital cameras, and the internet.)

On Day One, he transferred a phone call to me, instructing me to take results of a swim meet. I began to do so — in longhand … on a legal pad … with no sense of urgency. Norm about swallowed his cigar, blurting, “We don’t have time to do it that way, kid. Gotta type it — fast.”

He tried to break me in gently with game coverage. I accompanied him to a basketball game with the sole duty of taking photos. I assumed the film had been loaded. It hadn’t, so we had no pictures.

I was the equivalent of the high school freshman who shows up at hoop tryouts, airballing layups plus constantly double dribbling and traveling. The first week was a blur of activity and stress.

Standing in line to cash my first paycheck at National Bank of Geneva, I did a quick self-analysis as I stared at my check stub.

I had been making $95 a week on unemployment insurance. My net Times pay was $97. To earn the extra $2, I had put in a 65-hour week (no overtime) and endured one fiasco after another in the office and at games.

“This may not work out,” I remember thinking, convinced that Jollow and Managing Editor Don Hadley would fire me sooner than later.

Slowly, I learned. The staff had a great blend of veterans plus young, energetic reporters and editors.

My four-plus years in Geneva were better than any journalism grad school. I wrote, interviewed and reported virtually daily. I gained additional experience with layout and photography; I made a million mistakes and learned from some of them. I gained valuable knowledge about sports from the area’s impressive coaches and athletes.

After Geneva there were jobs in Binghamton and Rochester — where I contributed to the demise of the Sun-Bulletin and Times-Union. In 1986 I landed at USA Today, where I covered eight Olympics, more than a dozen world championships in track & field, and a slew of Final Fours, both men and women.

In 24 years at USA Today, attending events all over the country and world, I never encountered anything I didn’t see in my FLT days. There also were reunions with blasts from the past.

Pete Herrmann, the ex-Midlakes basketball coach, became head coach at Navy, led by David Robinson. Mark Wetmore, a good runner at Lyons and Cornell, became an agent for many world-class runners and the director of major meets and races.

The fantasy gig ended in late 2009 when USAT sports editor and FLT alum Monte Lorell informed me I was part of the paper’s latest layoff. That freed me to write a book, “Run to Overcome,” with Meb Keflezighi, the only man to win the Boston and NYC marathons as well as an Olympic medal in the event.

The best part of my Geneva days was re-connecting with the Lavin family. Tom Lavin Jr. and I had been JV basketball teammates at Hamilton College, often guarding each other in practice. BTW, I was way ahead of time with social distancing; I never was within 6 feet of him while I was on defense.

The Lavins basically adopted me. A friendship with Jody, the youngest of nine kids, progressed from rebounding for her in workouts, to dating and a marriage with two children, Eamonn (28) and Shea (26).

I’m still chasing Jody around gyms — she has coached high school basketball for 19 seasons after 10 years as a college coach — and having more fun than ever in doing so.