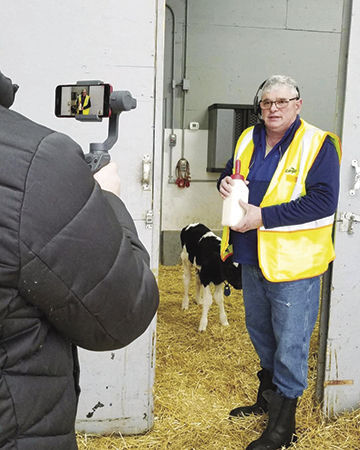 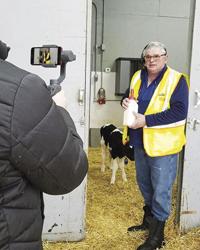 Two thousand middle schoolers from New York City followed George Andrew through El-Vi Farms virtually as part of the American Dairy Association NE Virtual Farm Tour. “With the right technology you can do amazing things,” said George, one of four partners in the family operation based in Newark. 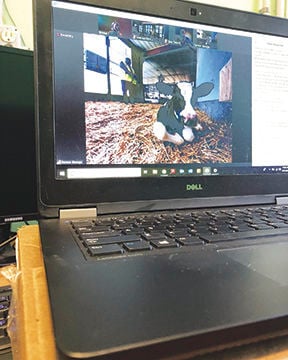 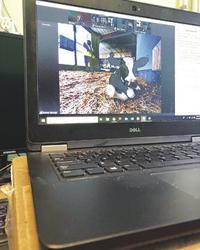 Two-thousand middle schoolers from New York City followed George Andrew through El-Vi Farms virtually as part of the American Dairy Association NE Virtual Farm Tour. “With the right technology you can do amazing things,” said George, one of four partners in the family operation based in Newark.

Two thousand middle schoolers from New York City followed George Andrew through El-Vi Farms virtually as part of the American Dairy Association NE Virtual Farm Tour. “With the right technology you can do amazing things,” said George, one of four partners in the family operation based in Newark.

Two-thousand middle schoolers from New York City followed George Andrew through El-Vi Farms virtually as part of the American Dairy Association NE Virtual Farm Tour. “With the right technology you can do amazing things,” said George, one of four partners in the family operation based in Newark.

Like fire, the wheel, automobiles and the telephone, social media has changed the world forever. Roughly one-in-three people across the globe are using social media platforms today to share, inform, influence, promote, and make friends. As a minority population in the U.S. — weighing in at less than 2 percent — farmers and ranchers are gaining online proficiency and sophistication using Facebook, Instagram, and others to connect directly with consumers. At 4,000 strong, New York dairy farmers are no exception.

At 27 years old, Emilie Mulligan represents the fourth generation at Mulligan Farm in Avon. This century farm milks 1,300 cows on 2,600 acres in the shadow of suburban Rochester. A Cornell graduate, Emilie most recently participated in the Young Dairy Leaders Institute, a nationally recognized leadership development program that prioritizes media training and consumer advocacy as important skills necessary to succeed in today’s business climate.

“People are interested in what’s happening on the farm, and curious about the technology we use,” said Emilie. “And nobody can resist a baby calf.”

She and her twin sister Claire are managing the farm’s social media. She involves the farm’s field crew where and when she can to show the feed to milk connection.

Emilie’s most popular post was a picture taken from the front seat of a truck during corn harvest 2019. The message addressed corn’s ability to suck up carbon from the atmosphere.

“The post was shared all over the country by many farm pages as well as Cooperative Extension and 4H,” added Emilie. “It was fun to see that people appreciated it.”

She has also jumped into doing virtual farm tours for diverse audiences ranging from a local preschool to food bloggers.

Making new connectionsKim Skellie and George Andrew are college classmates that became business partners in an established family farm in Newark. El-Vi Farms has grown from the 40 cows that Elmer and Viola Peck started with in 1953 to 2,000 cows in 2020. Working with two other partners — Allan Ruffalo and Josh Peck, Kim is the “people” guy and George is the cow man.

“The number one reason we use social media is to help the public understand how we treat animals,” said Kim. “Consumers like me are more and more interested in making a positive difference through our purchasing power. As a farm, we don’t want negative misconceptions about how we operate to deter people from buying dairy products.

“At the NYS Fair a few years back I met a woman from Manhattan who had a lot of questions about dairy farming,” said Kim. “Talking one-on-one with her, we both had ah-hah moments. Through social media, this type of interaction is possible on a much greater scale. We’re also able to inform legislators who are increasingly involved in animal policymaking. This is their chance to gain some knowledge that will influence future decision-making.”

George has taken the farm’s social media presence to a whole new level by hosting virtual farm tours sponsored by American Dairy Association North East. Imagine having 2,000 middle schoolers from New York City following your every word and step as you walk from maternity pen to the milking parlor and points in between. Students ask questions and get immediate responses from George who is outfitted with a microphone and shadowed by a camera.

“With the right technology you can do amazing things,” said George. Farm buildings have wireless connectivity, and George’s daughter Emma quarterbacks from a small office. “Students are so far removed from what we do, and never have the opportunity to put it all together. This has been fun for me. It gives me a fresh perspective on why I’m farming in the first place.

“Every farm should have a website or Facebook page to help build a positive image for farming and to create new relationships,” added George. “There is a train coming that we can’t stop, but we can be a part of the movement. El-Vi has been online for 10 years. Building trust in the communities where we live, and work is very important.”

The Bossards are one of four families who operate Barbland & White Eagle Dairies in Central New York. Between three locations, the operation milks 3,300 cows and tills upwards of 8,500 acres in Onondaga, Madison, and Chenango counties. The mother of two little girls and a full-time ag teacher at Hamilton Central Schools, Johanna Bossard is what she calls the farm’s PR specialist.

“Facebook was an easy transition for us, because I used it personally,” said Johanna. “But my game has gotten better over 10 years, and the farm is now on Instagram too. I have a personal passion for sharing what we do for a living and trying to correct misconceptions that consumers have about agriculture.” The farm has nearly 6,000 followers.

This article was prepared by the New York Animal Agriculture Coalition. NYAAC is a farmer founded and funded not-for-profit organization that strives to enhance the public’s understanding of and appreciation for animal agriculture and modern farm practices.