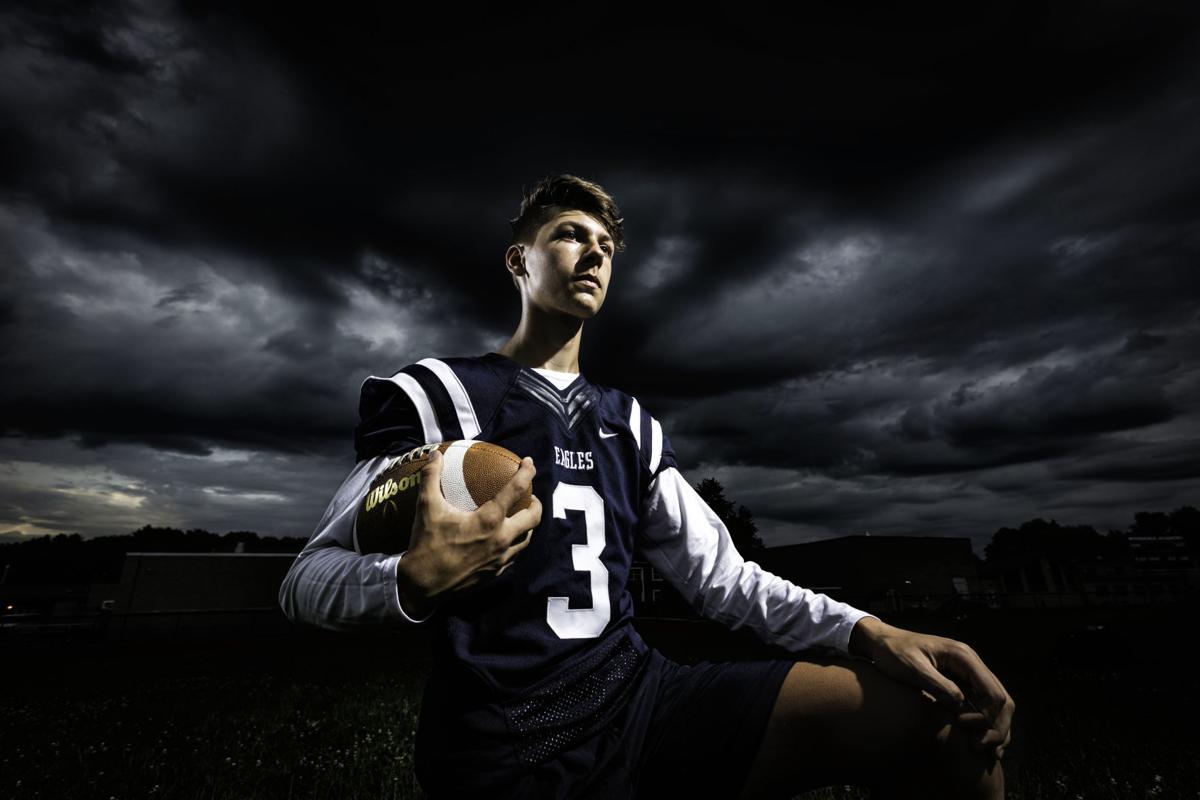 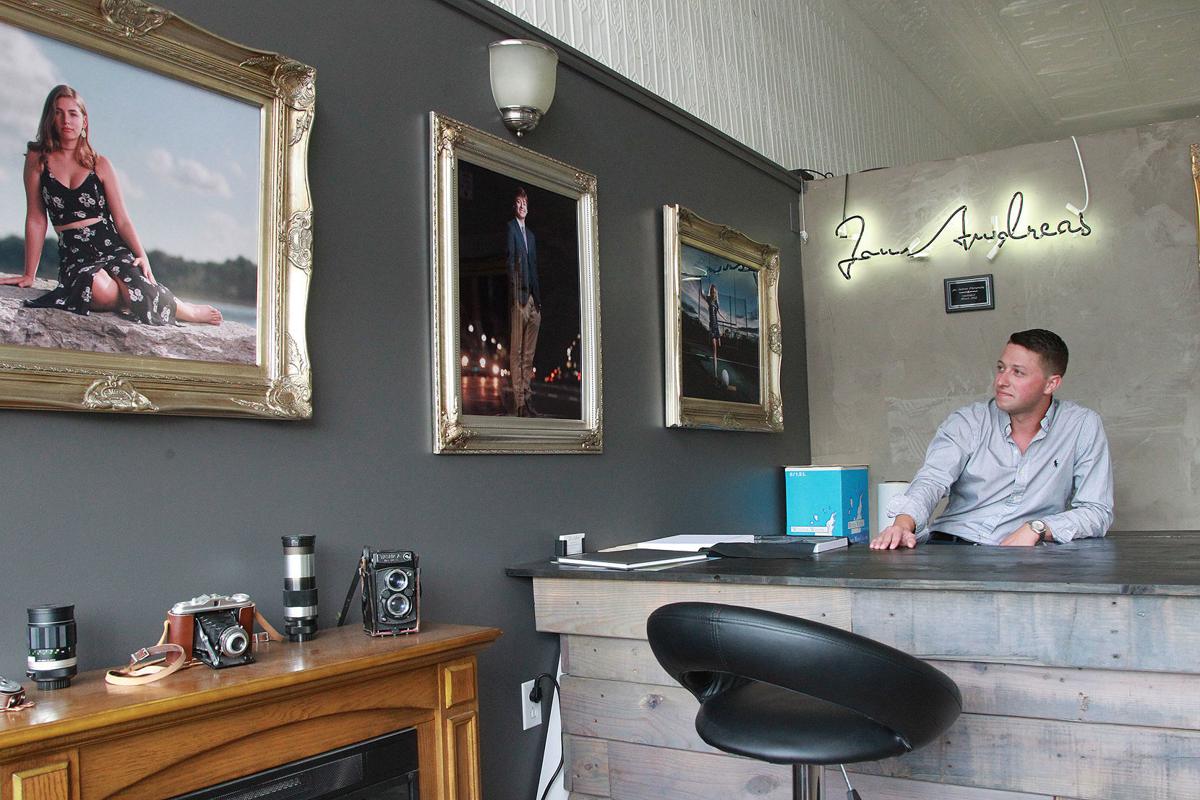 At top, Jon Andreas in his studio office. Hanging on his walls are examples of his work. 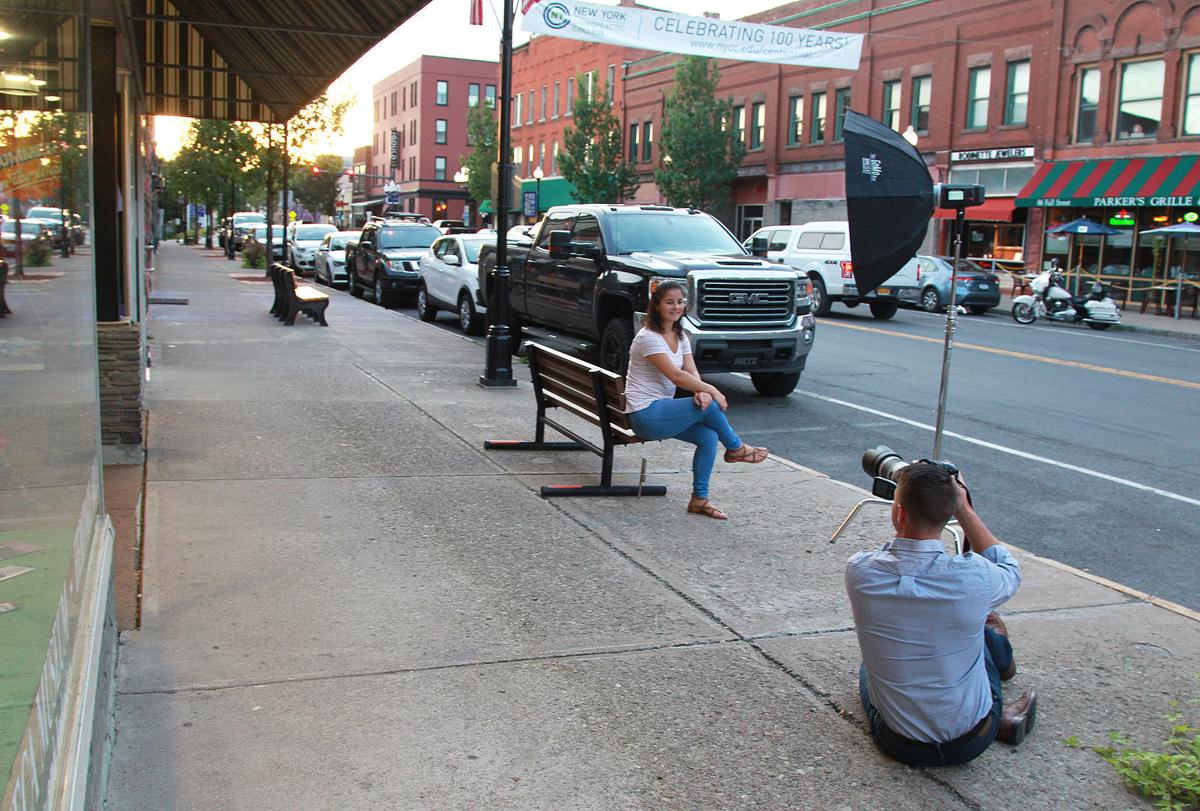 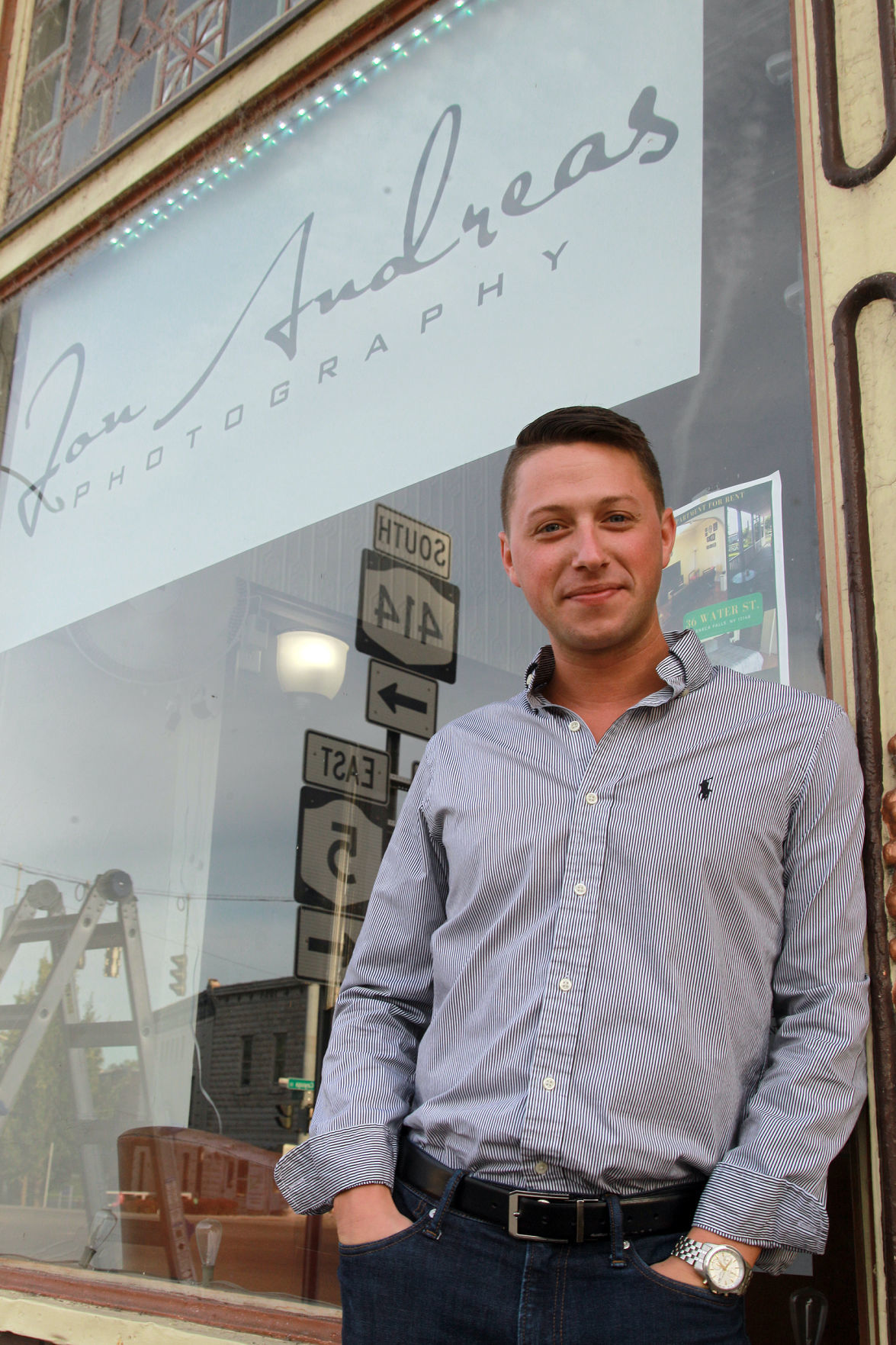 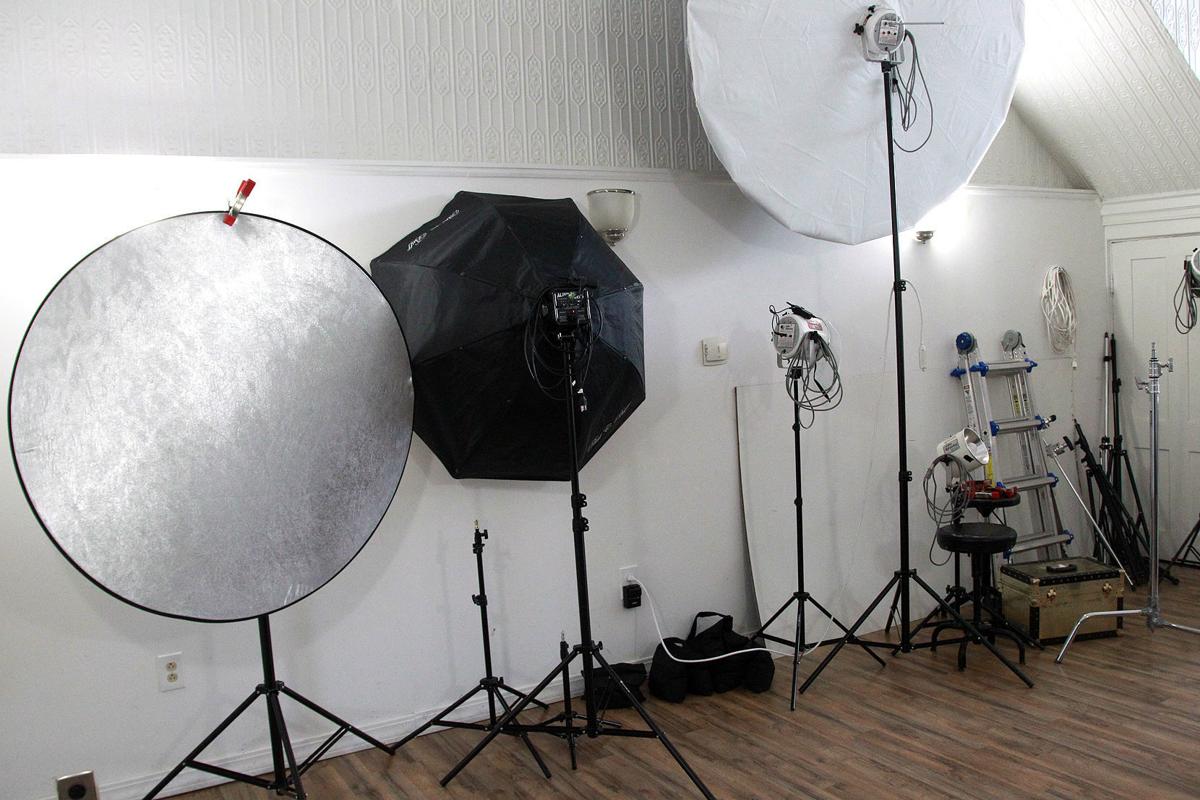 some of his lighting equipment

At top, Jon Andreas in his studio office. Hanging on his walls are examples of his work.

some of his lighting equipment

SENECA FALLS — Jon Andreas has been focused on photography since he was a youngster, so it’s no surprise he’s parlayed that passion into a career.

Andreas, who turns 27 Saturday, bought his first point-and-shoot camera, a Vivitar, when he was 11. He shot his first wedding at age 14. The 2011 Mynderse Academy graduate was recruited to take pictures for the high school yearbook when he was an eighth-grader.

Today, after launching his business in the fall of 2012, Andreas has created a niche as a senior portrait photographer and has cultivated numerous commercial clients as well. His business is now profitable, he said, after years of losses and learning.

Andreas is a one-man studio, and he frames his products as well. Having his hand in all aspects of his business is important to him.

“As soon as you start to bring other fingers into your studio you lose consistency,” he said.

After graduating from high school, Andreas attended Finger Lakes Community College for a semester to study marketing, but found that he had generated enough business to establish himself as a photographer full time and opened his studio at 45 Fall St. The space is bisected: In front is where Andreas consults with clients and frames his portraits — some of his favorite works are displayed on the wall and a small table is decorated with antique cameras and light meters — while the rear area, with high ceilings and bright lights, is where Andreas takes his studio shots.

A large, well-lit bathroom accommodates multiple outfit changes, and a background roller system allows for different backgrounds, although Andreas said he primarily uses the grey, black and white ones when shooting his subjects.

“It’s simple and clean, and I think it’s my style,” he said.

Andreas first started taking senior high school portraits in 2008 — of his friends — while he was still in high school. He said it’s kind of odd to go to their parents’ houses today and see those early portraits prominently displayed.

For two or three years after establishing his business, Andreas worked for Vantine Imaging, taking fraternity and sorority portraits around the country. Andreas enjoyed that experience, which he did for about three years. He traveled the country with his expenses paid and honed his approach in making young adults comfortable while being photographed.

Although he shot weddings as well, he gave up that aspect of his business in 2015. Andreas said he realized they were too time consuming, eating up all of his weekends; they weren’t as profitable; and he didn’t enjoy them as much.

“The senior stuff is so much fun,” he said.

Today, senior portraits make up about 50 percent of his business, keeping him very busy from July through the end of October. He estimates he will do about 50 such portraits this season, and his client base extends beyond the Finger Lakes. He said he has taken portraits of seniors who attend school in Buffalo, Rochester and Baldwinsville, in addition to those from Finger Lakes-area schools like Geneva, Midlakes and his alma mater.

Andreas credits word of mouth and Instagram as key in expanding his business. Young adults post their photos on Instagram, and their followers may say, “Oh, I want that done,” Andreas said.

Senior portraits have come a long way since the subjects dressed up, sat up straight and folded their arms on their laps for the camera. Today’s shots often are not posed as formally; Andreas said his subjects are looking for “lifestyle” shots that project who they are. Many youngsters don their school sports uniforms or inject their hobbies into their shots — be it music, cars or even future career goals. Studio sessions are augmented with location shots. Sessions can last anywhere from 90 minutes to four hours.

Andreas first schedules a consultation to get to know his seniors and to ensure he and they will be a good fit. He believes his own youth and energy make his subjects more comfortable. When one young man brought in multiple pairs of sneakers, Andreas decided to use them as background props instead of outfit changes.

“You can see it in the kids’ eyes when you’re bringing out their confidence,” he said. “You can see the personality that’s brought out with all the images.”

Later, Andreas schedules an “image reveal” session in his studio, a slide show that he encourages not only the subject but also his or her family to attend.

Andreas does not charge a session fee, but is honest in saying his finished products are not inexpensive. He said most clients spend just shy of $1,000 on portraits and albums; packages range in price from $395 to $2,600.

Andreas takes pride in framing his work and creating custom photo albums. He said he knows what products sell and finds framing and designing his photos fulfills a creative need.

“If you’re coming here for digital products, this is not the place for you,” he said, holding a thumb drive in his hand.

It’s clear Andreas enjoys working with young people, but he’s equally grateful for his commercial clients that make up the other 50 percent of his business and keep him busy other times of the year. Montezuma Winery was his first client; he has gone on to add other wineries, breweries and distilleries; Waterloo Container; and even a Montreal company, Amcor, that makes caps for wine bottles. Andreas has done food shots for the Gould Hotel, takes pictures for real estate agencies, and snaps loads of professional head shots.

Looking ahead, he envisions a move in the next year or two just because he is outgrowing his current location.

“I need more space, which is a good problem to have,” said Andreas, who appears just as passionate about photography as when he was first getting started as a pre-teen.