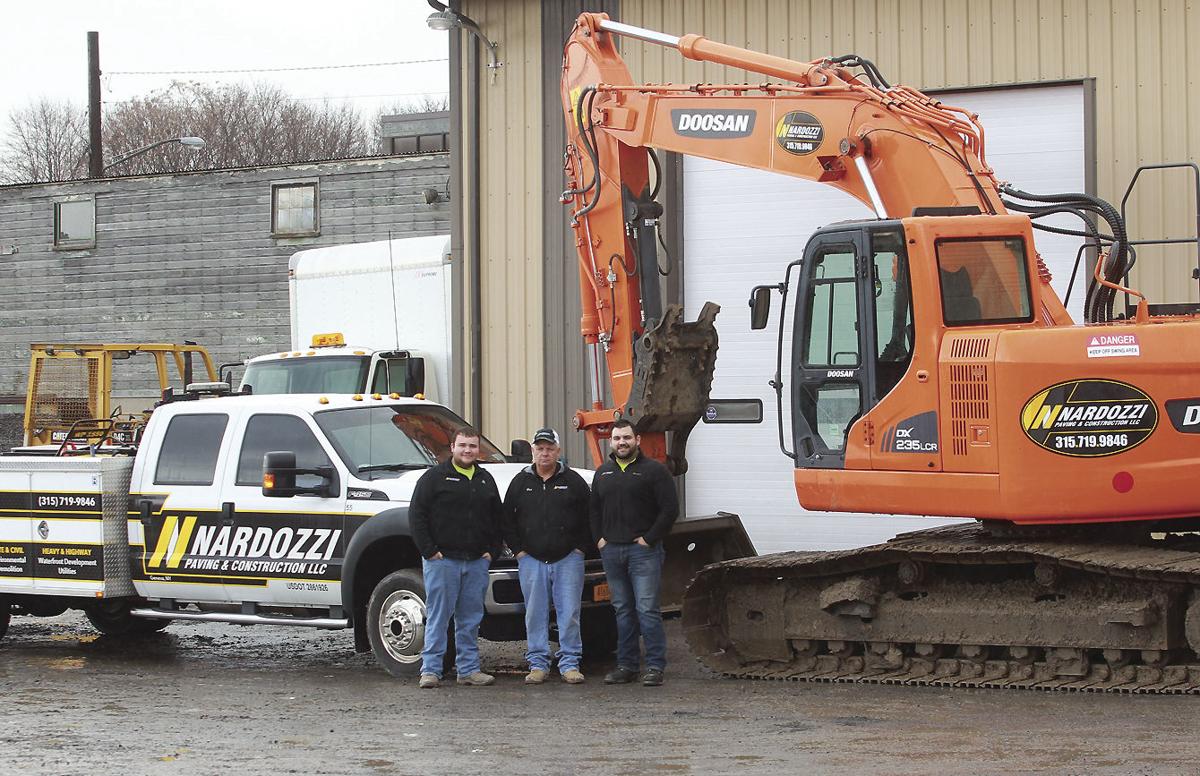 Aspiring lawyer Jim Nardozzi just couldn’t say no to his roots. As a senior in high school he started Finger Lakes Landscaping and Masonry Design, which branched into two more companies — Nardozzi Paving and Construction and Nardozzi Holdings. Pictured from left are Mike, Don and Jim Nardozzi. 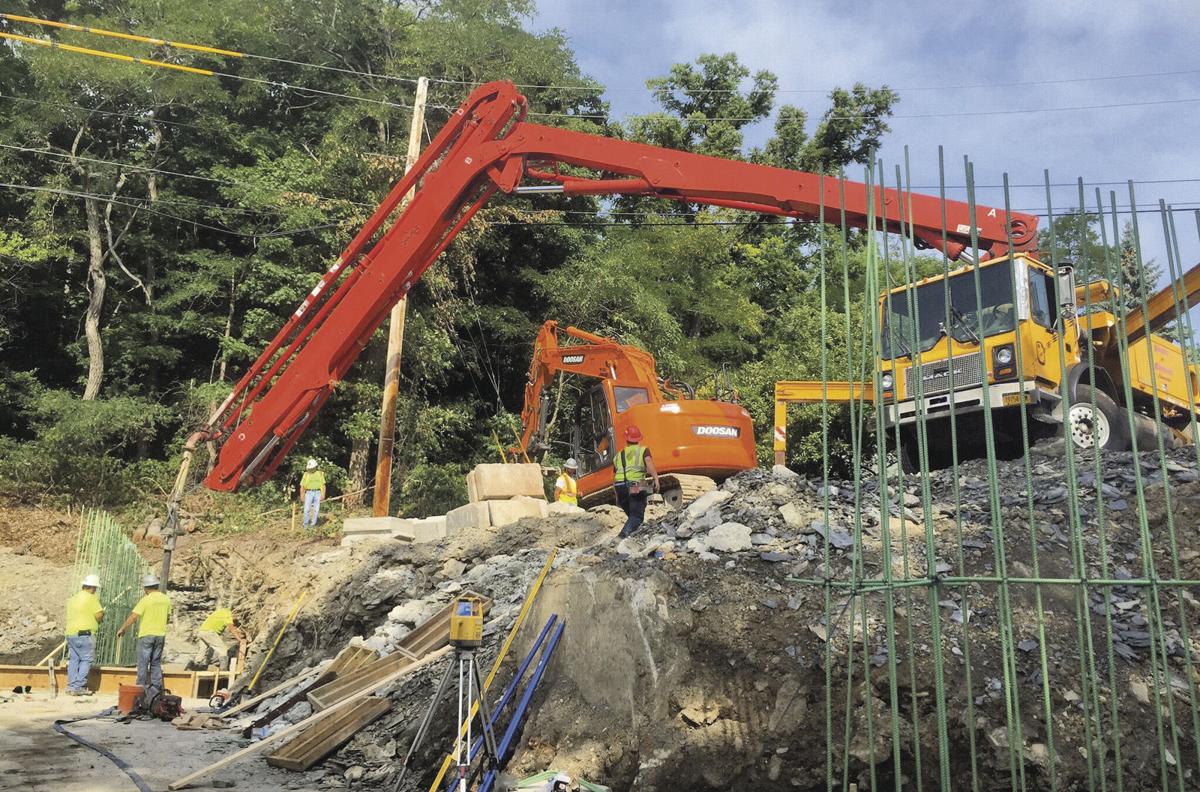 A Nardozzi crew, led by Mike Nardozzi, forms and installs structural steel for an Ontario County bridge culvert in Honeoye. 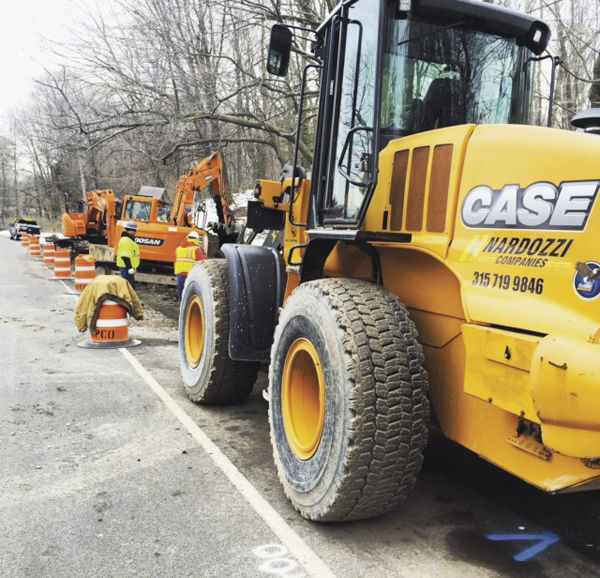 A Nardozzi crew installs a water main for the City of Rochester on Lake Shore Boulevard along Lake Ontario.

Aspiring lawyer Jim Nardozzi just couldn’t say no to his roots. As a senior in high school he started Finger Lakes Landscaping and Masonry Design, which branched into two more companies — Nardozzi Paving and Construction and Nardozzi Holdings. Pictured from left are Mike, Don and Jim Nardozzi.

A Nardozzi crew, led by Mike Nardozzi, forms and installs structural steel for an Ontario County bridge culvert in Honeoye.

A Nardozzi crew installs a water main for the City of Rochester on Lake Shore Boulevard along Lake Ontario.

GENEVA — Jim Nardozzi was going to be a lawyer.

After graduating from Geneva High School in 2006, he was accepted into the pre-law program at Hartwick College.

“My mom still has the letter of acceptance from Hartwick framed on the wall,” he said. “I found law intriguing. I had a passion for law.”

However, he couldn’t resist the lure of his family’s construction and paving roots. He worked for his father, Don, at Ontario Concrete & Paving back when he was 9 years old.

“I wanted to start my own business,” Jim recalled. “I got my DBA (Doing Business As) on May 1, 2006 — my birthday — when I was a senior in high school. I formed Finger Lakes Landscaping and Masonry Design.”

He bought a used Ford truck with 246,000 miles on the odometer, along with a small excavator.

His younger brother, Mike, also worked in the construction business while in grade school. He is now company vice president and part owner of Nardozzi Companies.

Jim is 28, six years older than Mike. Their father left Ontario Concrete & Paving to join his sons as chief of operations.

“My dad and his three brothers all worked in the paving and concrete business at Ontario,” Jim said. “I found I could still indulge my passion for the law when we did civil projects that involve bidding specifications, contracts and contract law. I was self-educated on those items and enjoyed that work, but I like to be with the guys working a job just as much.”

The business grew rapidly in a short time.

There are now three separate businesses under Nardozzi Companies’ umbrella: Nardozzi Paving and Construction, Finger Lakes Landscaping and Masonry, and Nardozzi Holdings. The latter is a company devoted to real-estate development.

Nardozzi Paving and Construction has been awarded the contract to reconstruct Pulteney Street through the Hobart and William Smith Colleges campus.

Jim operated out of his parents’ Carter Road garage when he started. After two years there, he moved to a new space on County Road 4. Three years ago, he bought the old Vogt Lumber Co. at 124 N. Genesee St., the business’ current location.

However, Jim noted the company already is beginning to outgrow that space and is looking at establishing a satellite location in Rochester, largely because the company does a lot of work in Monroe County.

They will not move from Geneva, though.

“I began doing mostly residential and lakefront work,” Jim continued while contemplating his roots in the business. “In 2007 I started to do concrete retaining walls. My dad joined us in 2011 and we added asphalt and concrete paving and roads.”

The business has grown ever since. These days, it does multi-million dollars’ worth of work each year. The Pulteney Street project alone is a $2.5 million job.

Nardozzi’s work stretches from Buffalo to Syracuse, and Sodus to Elmira. Among their frequent clients are the Ontario County Department of Public Works, the city of Rochester, the Monroe County highway department, the Monroe County Water Authority and the state Department of Transportation. Nardozzi is on their bid list, meaning they get notified of all biddable jobs.

“We have doubled our business in the past three years,” Jim said. “We have great employees and staff. We’re like a family. We still practice the core values Dad taught us of safety, productivity and profitability.”

Jim remembered he and his brothers getting toy excavators when they were young.

“We have a photo of my brother with a tool belt around his diaper,” he laughed.

Nardozzi has done work for several area school districts, municipalities, colleges, the state Agricultural Experiment Station, Zotos, Finger Lakes Health and others. They also take care of snow and ice for 48 area parking lots — and have been awarded the contract to maintain the snow and ice at the new del Lago Resort & Casino in Tyre.

The companies can install water, sewer and gas pipes; build seawalls and bridge culverts; pave roads; and do demolition work.

Jim admits he puts a lot of time into his job. That’s beginning to change now that he and his wife Kaitlyn, a first-grade teacher at West Street School, had their first child, a daughter, in August.

“I’m now trying to spend more time at home and less at work,” Jim said, “but it’s hard. I love my work.”