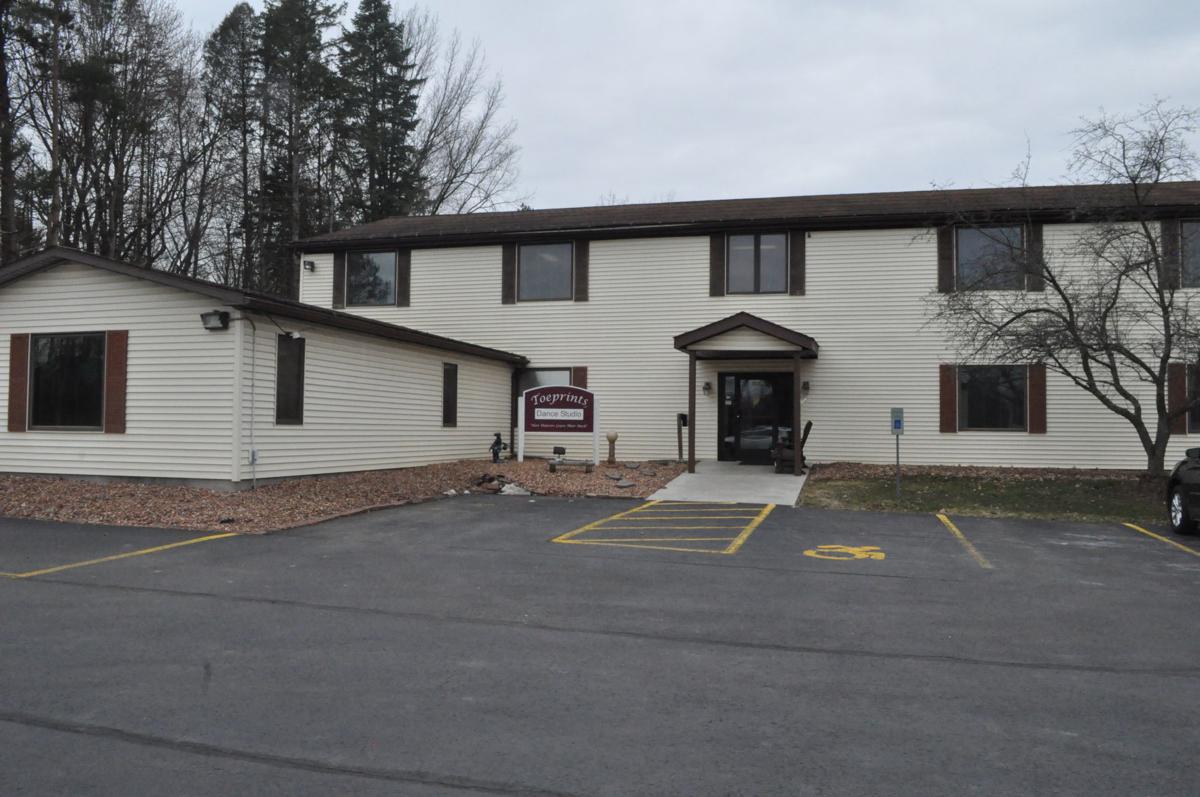 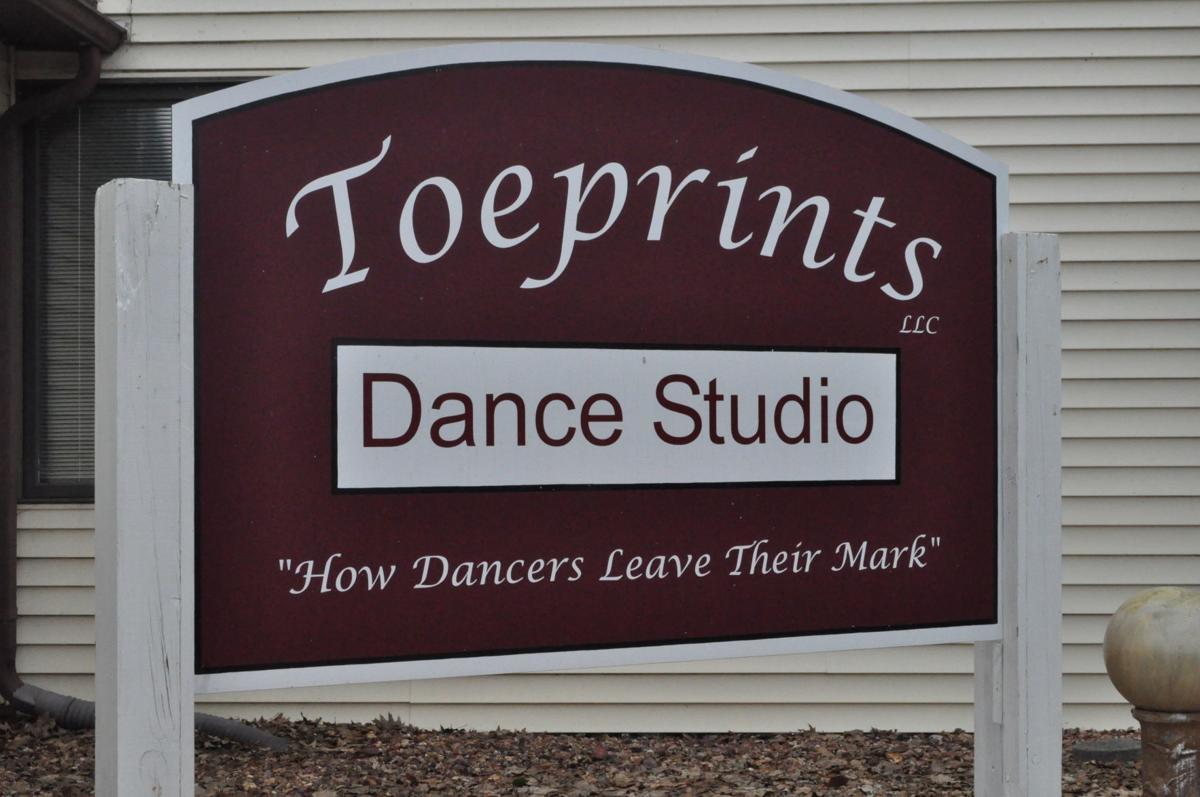 Barb Herbert’s motto for her business is “How Dancers Leave Their Mark.” 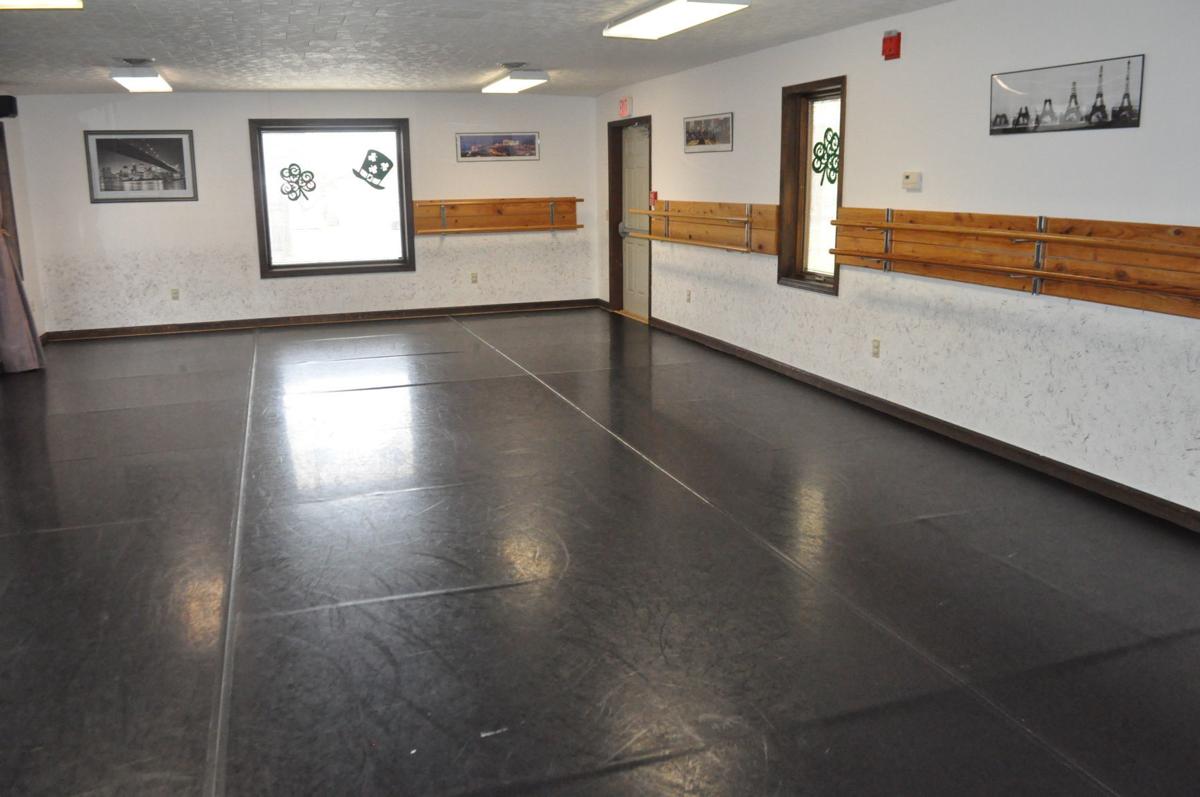 One of the three studios at Toeprints. 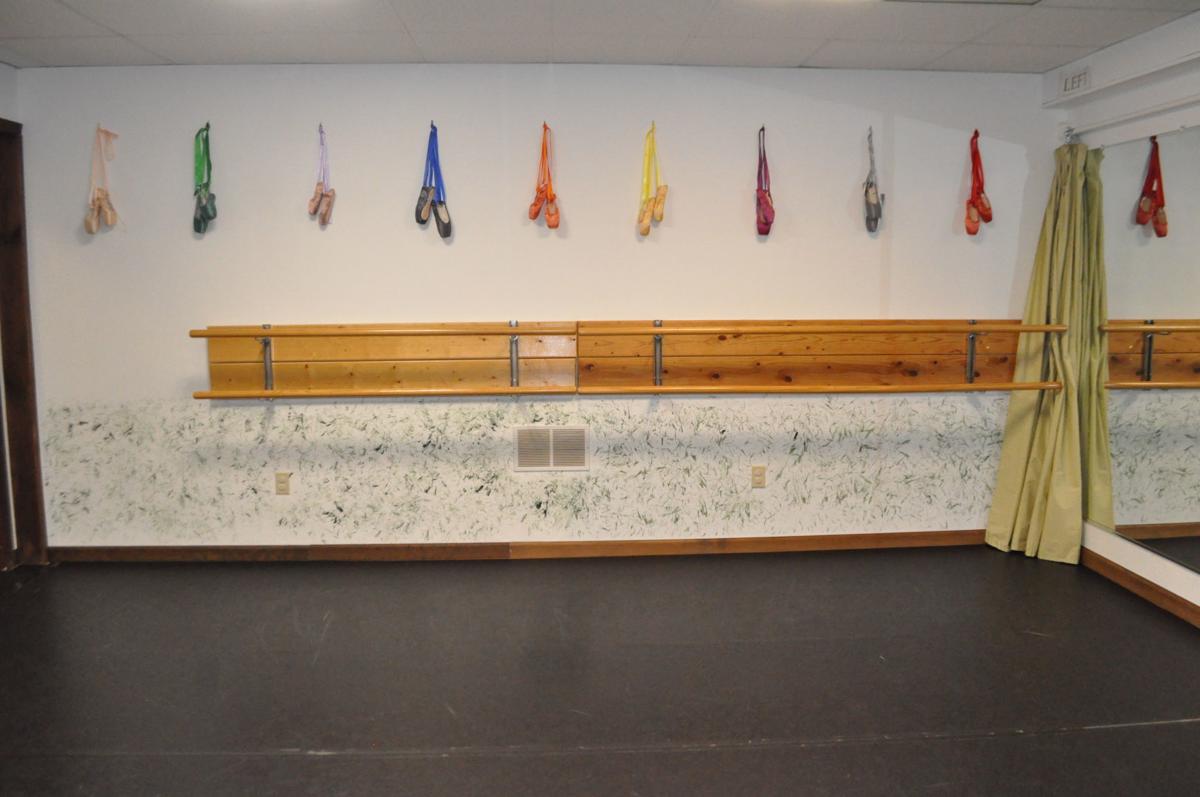 Colorful toe shoes adorning the wall above a barre at Toeprints dance studio in Geneva. 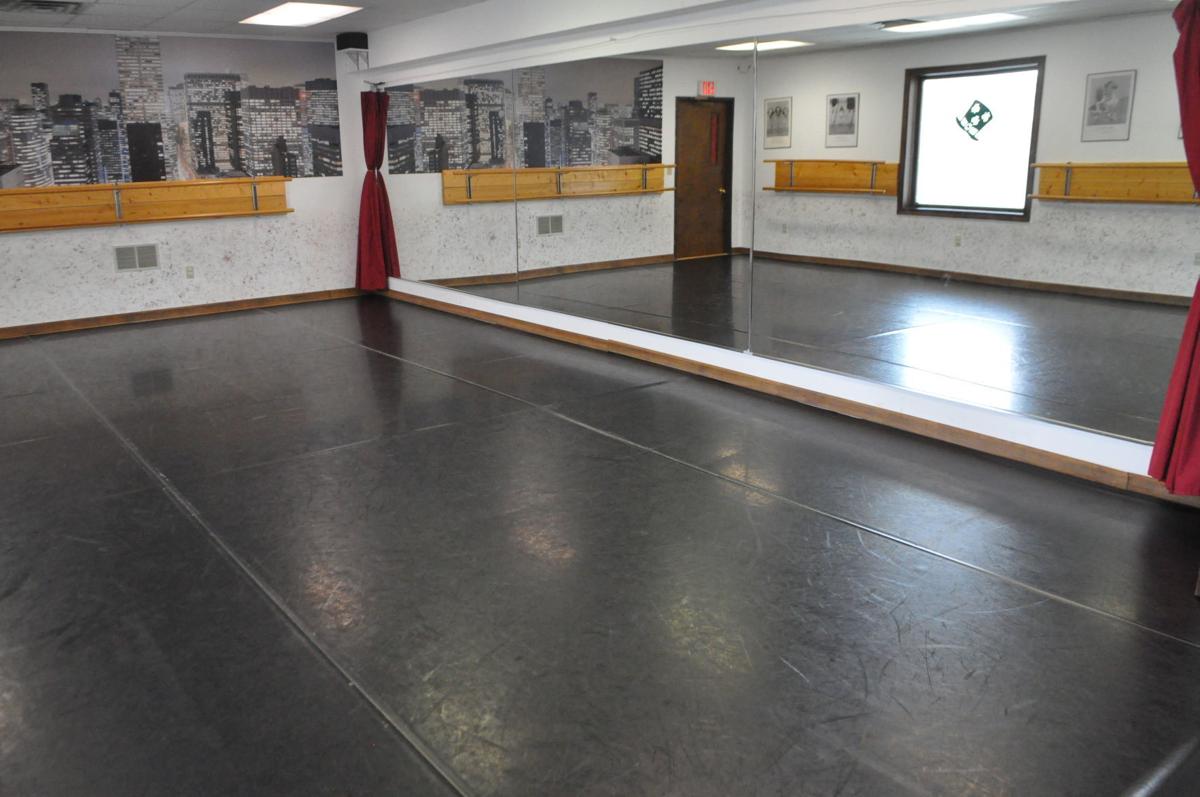 One of the three dance studios at Toeprints on PreEmption Road in Geneva. The floors are made of a spongy material to protect dancers’ legs. 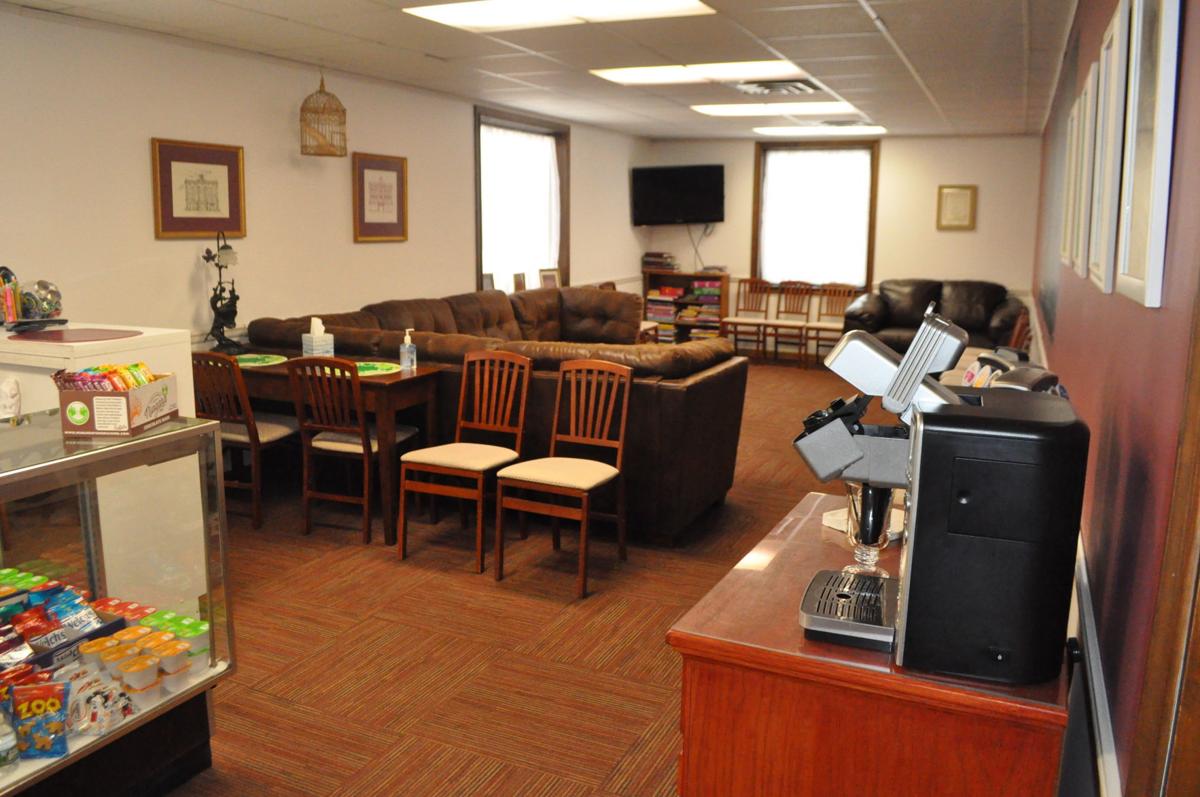 The comfortable waiting room at Toeprints dance studio in Geneva features a leather sectional, coffeemaker, snacks and plenty of seating. 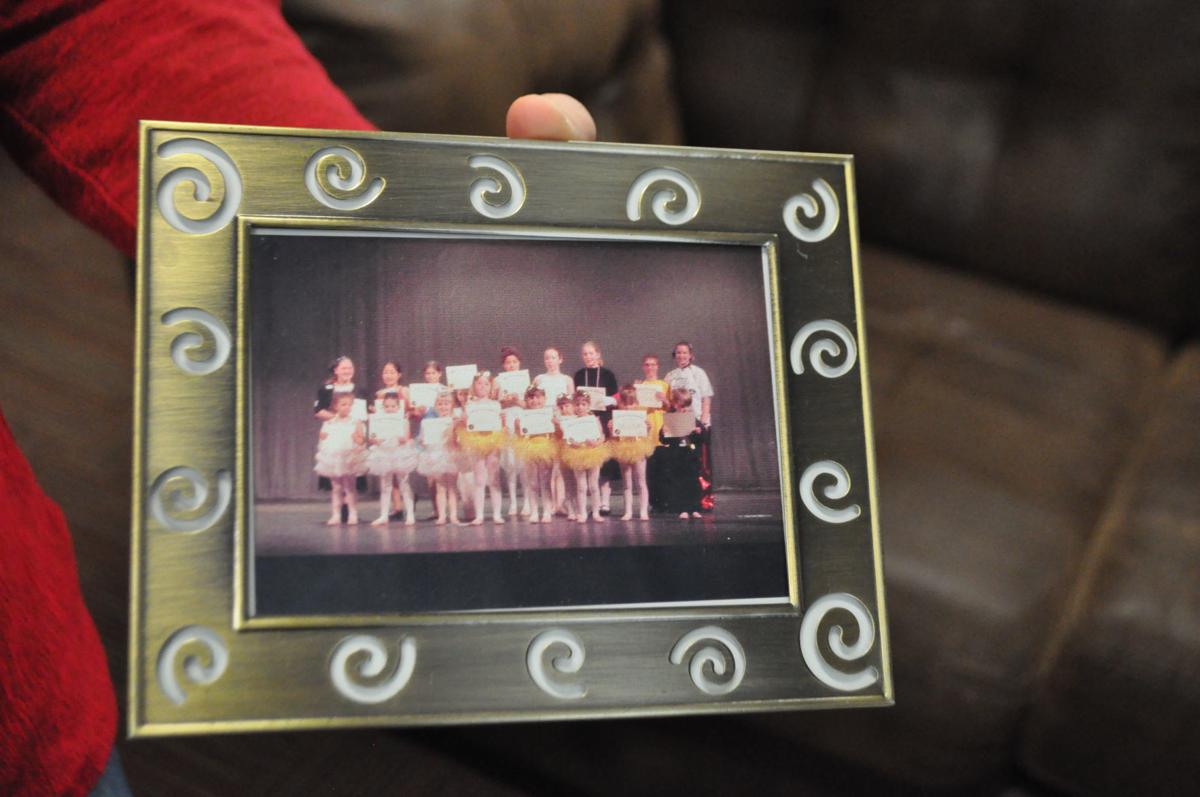 Barbara Herbert holds a picture of her first-ever dance class of 12 students in 2001.

Barb Herbert’s motto for her business is “How Dancers Leave Their Mark.”

One of the three studios at Toeprints.

Colorful toe shoes adorning the wall above a barre at Toeprints dance studio in Geneva.

One of the three dance studios at Toeprints on PreEmption Road in Geneva. The floors are made of a spongy material to protect dancers’ legs.

The comfortable waiting room at Toeprints dance studio in Geneva features a leather sectional, coffeemaker, snacks and plenty of seating.

Barbara Herbert holds a picture of her first-ever dance class of 12 students in 2001.

Since that tragic day, however, Herbert has taught plenty of classes at her PreEmption Road facility that now includes three separate studio spaces. In fact, she’s starting to teach the children of some of her early dancers.

Her first year she had 12 students; now that number hovers around 100 — with students coming not only from Geneva but also Seneca Falls, Romulus, Penn Yan, Phelps and Macedon.

Although COVID-19 has temporarily shuttered the dance studio until at least April 12 like so many other businesses, Herbert said last week before the closures were announced that she and her students enjoy interacting with others from across the area.

“They get to make new friends,” she said of her students. “And none of the stuff from school comes to the studio.”

Herbert’s students range from pre-schoolers to high school seniors. Since its beginning, Toeprints has been at 758 PreEmption Road (behind Mr. Twistee’s, which is owned by Herbert’s family), but a growing clientele prompted her to expand studio space to about 2,000 square feet in 2012. The studio now includes three dance areas (all equipped with absorbing sprung floors that cushion dancers’ legs); a retail store, Herbert’s office, storage space, a staff room and a large waiting area for parents complete with Wifi, coffee, snacks and comfortable couches where they can wait during their children’s lessons.

“This is where parents get to relax,” Herbert said, gesturing toward the waiting area. “Sometimes you have to grow in order to grow.”

Toeprints offers 11 types of dance classes (see box) taught by Herbert or her two main instructors — Nikki Rolenaitis and Lauren Cook (she also employs a few on-call substitute teachers). Among her 100-plus students are a few male dancers as well, which Herbert loves.

The variety of dance classes is meant to cast a wide net over aspiring dancers.

“We really play to the kids and what they want,” Herbert said.

She added that on average, youngsters take dance for about three years. Herbert has seen students try dance for just a year, or become “lifers” like the five seniors she has this year. To her, it’s important to “educate people everybody can dance. If you’re 16 and never taken lessons, I can find the spot for you to dance,” she said.

Classes are held Monday through Thursdays and monthly tuition per class ranges from $71 to $88; costume costs are built into tuition except for the Broadway dance classes. Herbert stresses that her classes have size limits and there are no extra fees associated with the end-of-year recital at the Smith Opera House. Discounts are available for families or those students who take three or more classes. Toeprints does not offer instruction over the summer but holds an intensive week of classes in August to prepare students for the upcoming dance year and offers others an opportunity to see what the classes are like.

Herbert also earned certification from Rhythm Works Integrative Dance to help teach those with learning differences or special needs. She assesses such prospective students one-on-one at first to see which class or whether a private lesson would best suit their needs.

“We can provide that for them,” she said.

A 1997 Waterloo High School graduate, Herbert started dancing at the age of 5 and studied dance in the summer at Saratoga Springs with the Briansky Studio and at Mercyhurst and Clarion universities after high school.

Her lobby features what she calls her “wall of inspiration,” with photos of such well known dancers as Fred Astaire, Gene Kelly, Michael Flatley, Mikhail Baryshnikov, Judy Garland, Samantha “Mandy” Moore and more. Inspirational sayings such as “Dream Big,” “Do What You Love” and “Live in Wonder” are peppered throughout the studio.

Herbert realizes young people have many more activity choices than they did even five years ago. She’s grateful when they choose to spend their time dancing at Toeprints, which she tries to infuse with a positive, family atmosphere.

“I’ve seen my seniors since they were pre-schoolers,” Herbert said. “That relationship building is very different in this business. I get very attached and hate to let them go.”

Types of dance at Toeprints