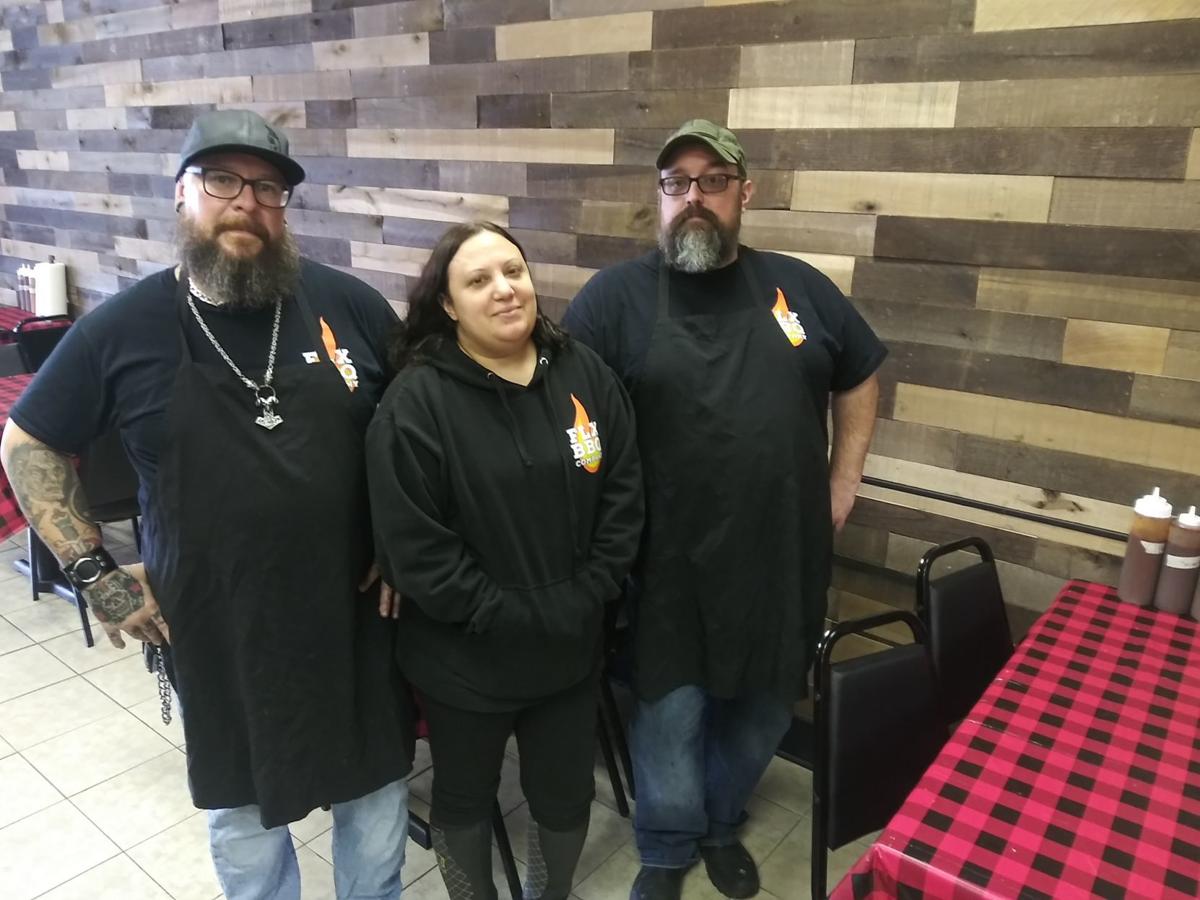 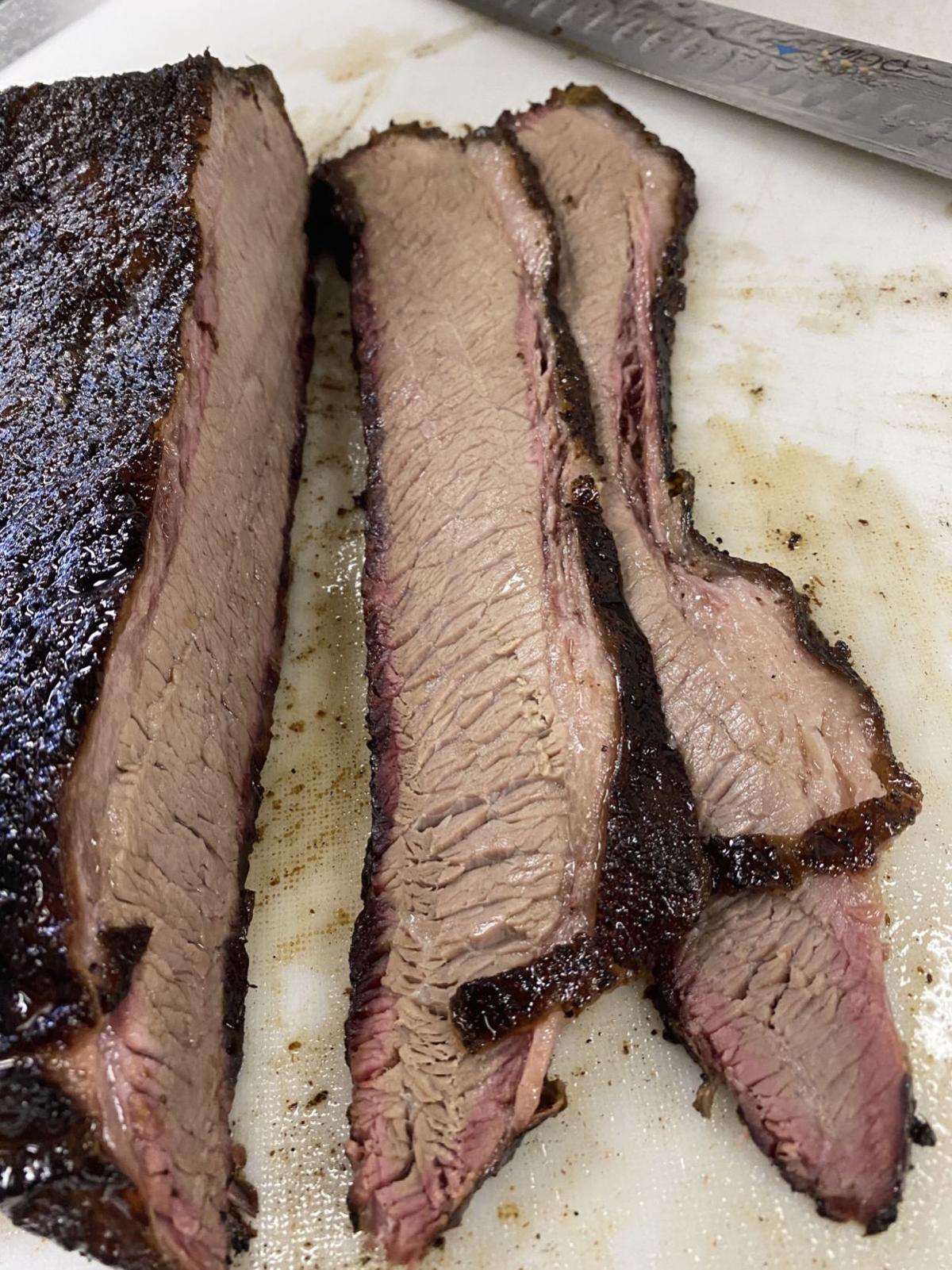 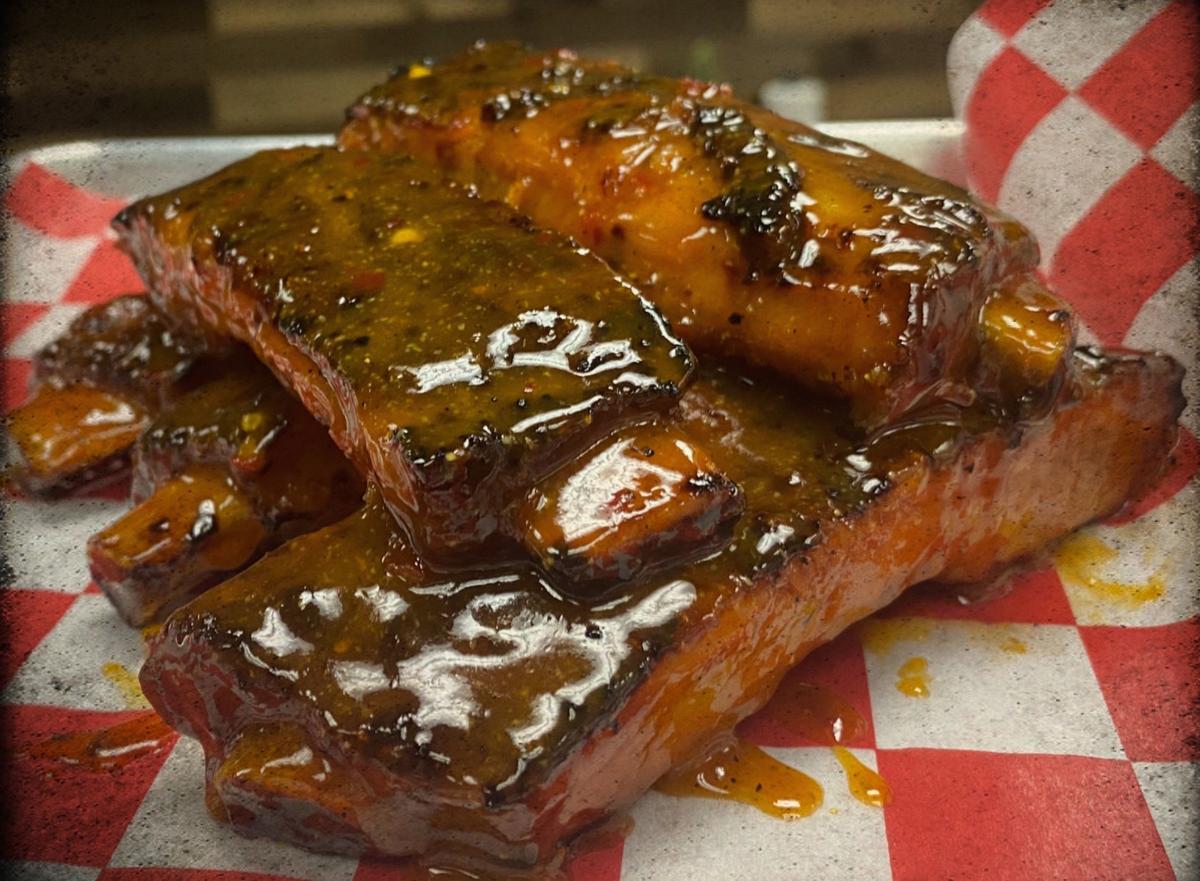 The ribs at Finger Lakes Barbecue are cooked with just a dry rub. Sauces are available at the table to be added to the smoked pork. 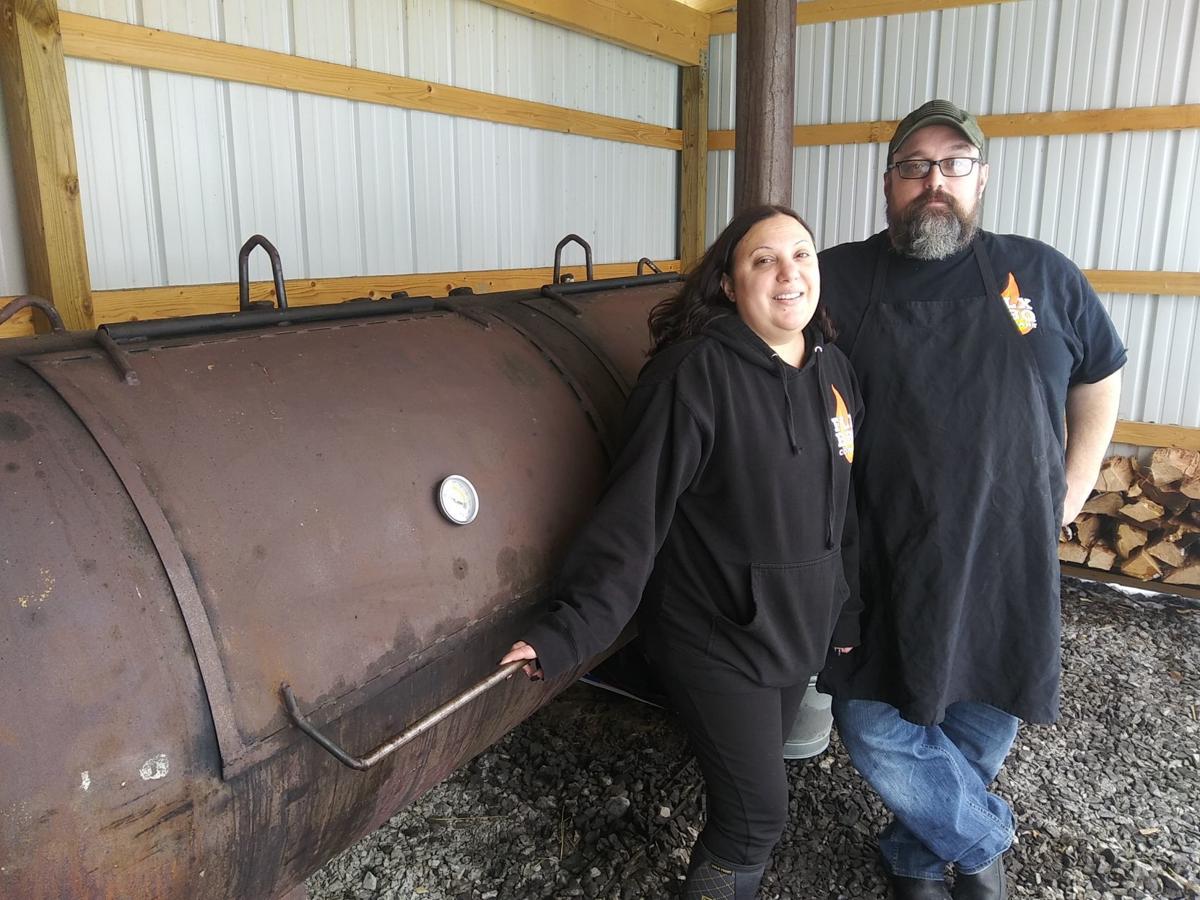 Kim and Bob Baldwin are seen with the smoker where all the meat magic happens. 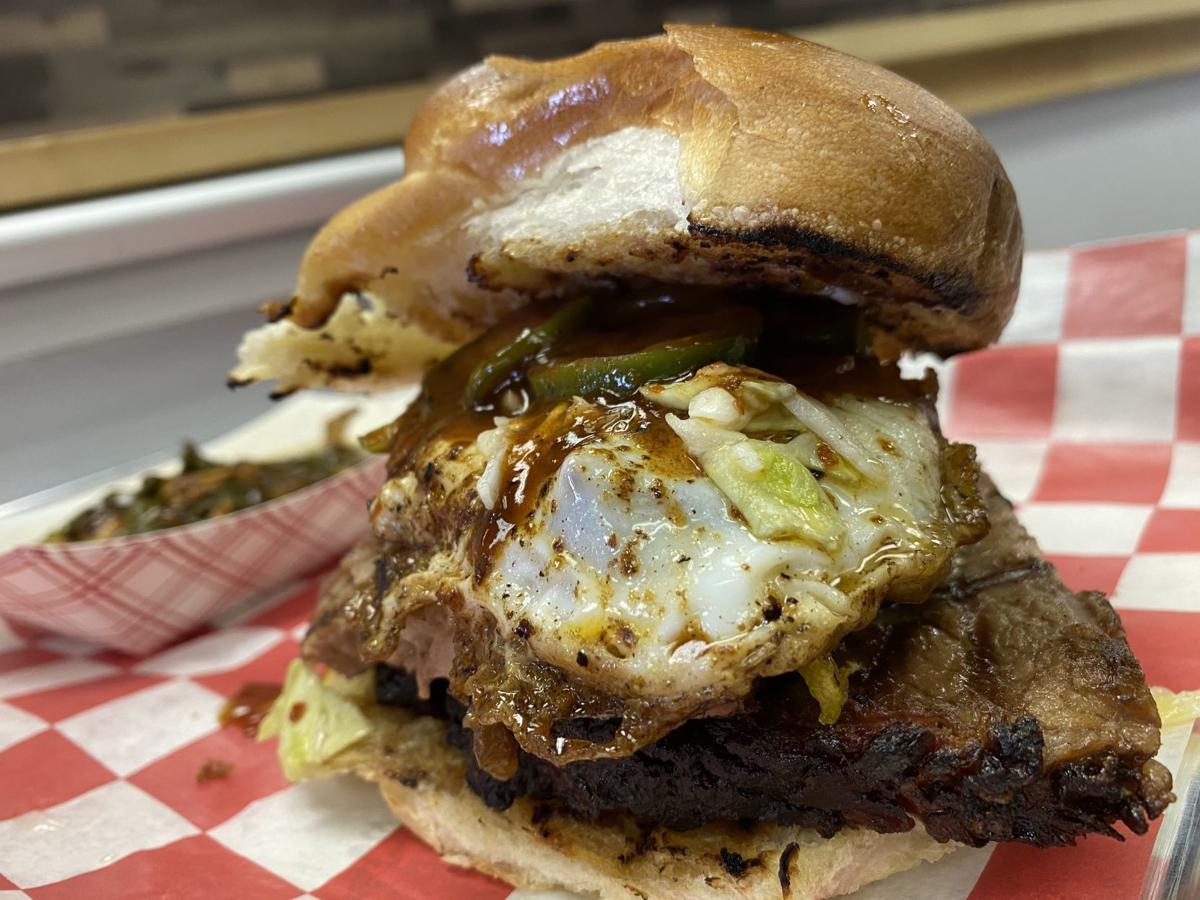 The ribs at Finger Lakes Barbecue are cooked with just a dry rub. Sauces are available at the table to be added to the smoked pork.

Kim and Bob Baldwin are seen with the smoker where all the meat magic happens.

CANANDAIGUA — There’s a place in Austin, Texas, where barbecue fans begin lining up as early as 7 a.m. to get a crack at the fabled joint’s meats — from brisket and ribs to sausage and turkey. It’s called Franklin Barbecue, and it’s on the bucket list for brisket lovers across the country.

Franklin Barbecue also serves as the inspiration for what Finger Lakes Barbecue is trying to do — not in the middle of central Texas, mind you, but in upstate New York.

“Texas barbecue has nothing to do with what’s being done in New York,” said Bob Baldwin, who runs Finger Lakes Barbecue in a small plaza on Route 332 with his wife, Kim. “We’ve got a pretty unique thing we do. Nobody does what we do.”

That’s not to say there aren’t great places to get barbecue around here, Bob emphasized. The husband and wife are barbecue fans themselves and often travel to spots in the region to sample what’s available.

“Primarily, our love for barbecue is behind what we do,” Bob said.

While there are lots of places with good-tasting barbecue in these parts, Bob said none he has tasted are embracing the central Texas-style approach made famous by Franklin Barbecue, whose customers have included former President Barack Obama. The restaurant’s pitmaster and co-owner, Aaron Franklin, is co-author of the New York Times bestselling book, “Franklin Barbecue, A Meat-Smoking Manifesto,” which Bob considers the Bible of barbecue, central Texas style.

Finger Lakes Barbecue Company embraces the style that has made Franklin Barbecue a legend. While customers aren’t yet lining up at the Canandaigua restaurant at 7 a.m., the couple’s brisket, ribs, pulled pork and chicken often sell out.

“I just want people to know that we don’t run out of food,” Bob said. “We sell out of food.”

Finger Lakes Barbecue is not Bob and Kim’s first crack at the business.

The couple came to the Canandaigua area in 2016 at the invitation of Bob’s longtime friend, Gary Storms, to operate Smokeman Barbecue at the old Captain Yogi’s on East Lake Road in Crystal Beach, where they still live. It was there that they built their first smoker. Bob said that venture provided lots of education for where he wanted to take Finger Lakes Barbecue.

“We have failed enough to know what to do right,” Bob said.

For those who eat Finger Lakes Barbecue’s fare, they’ll be tasting brisket that’s been in the smoker for anywhere from 9-12 hours.

The couple’s night pit-hand, Vic Kless, gets things rolling at 1 a.m. by starting the fire in the big smoker that sits in an open shed behind the restaurant. Kless tends to the smoker until Bob’s arrival at 8 a.m.

It’s all wood, said Bob, unlike some barbecue joints that use gas-assisted machines and a smaller amount of wood that can make it easier to produce more meat, but without the flavor he and Kim want for their customers.

At 11 a.m., Bob said people start coming in for their smoked brisket, ribs, pulled pork and chicken, the latter of which is a fireman’s-style flavor and is not smoked.

The menu, by design, is simple, with sides like mac and cheese, potato and mac salad, baked beans, two types of slaw, and collard greens. If the menu is too big “you lose focus on the barbecue,” Bob said.

The couple is particularly proud of its cornbread, which they said is so moist and flavorful that it doesn’t need to be buttered.

Bob noted that great brisket is not easy to make, even for experienced barbecuers, but when it’s done right, it’s a thing of beauty.

“I love beef fat,” Bob said. “The secret to great brisket is you have to render that fat (through the brisket). Cooked right, brisket is tender, juicy, with a touch of smoke, a little bit of pepper on the bark. It’s decadent.”

While Bob is primarily the food guy in the Finger Lakes Barbecue Company operation, Kim handles most of the business dealings; however, she is part of the kitchen staff as well.

“There are things I cook here,” she said. “I’m more front-of-the house, the business end.”

The couple noted they have great business partners: Josh Kesel, who owns Advanced Environmental and Restoration Services, and Rich and Courtney Hand of Anytime Pest Control. They said the partners are not involved in the day-to-day operations of Finger Lakes Barbecue Company, but were instrumental in helping them launch the business.

The other employees include Eric Weis and Shawn, who asked that her last name not be used. They close the restaurant each night.

While Finger Lakes Barbecue is doing better than expected — their projected opening date went from April to late August because of building flooding — it left them looking toward 2020 to grow the business.

“It should just take off in spring and summer,” Kim said.

They’re also looking to go mobile with a food truck operation and catering, but that might need to wait another year, they agreed.

“We may not see ourselves mobile until the following spring,” Bob elaborated.

The couple worked in the credit-collection business in Buffalo for many years, but neither regrets their move to the restaurant industry.