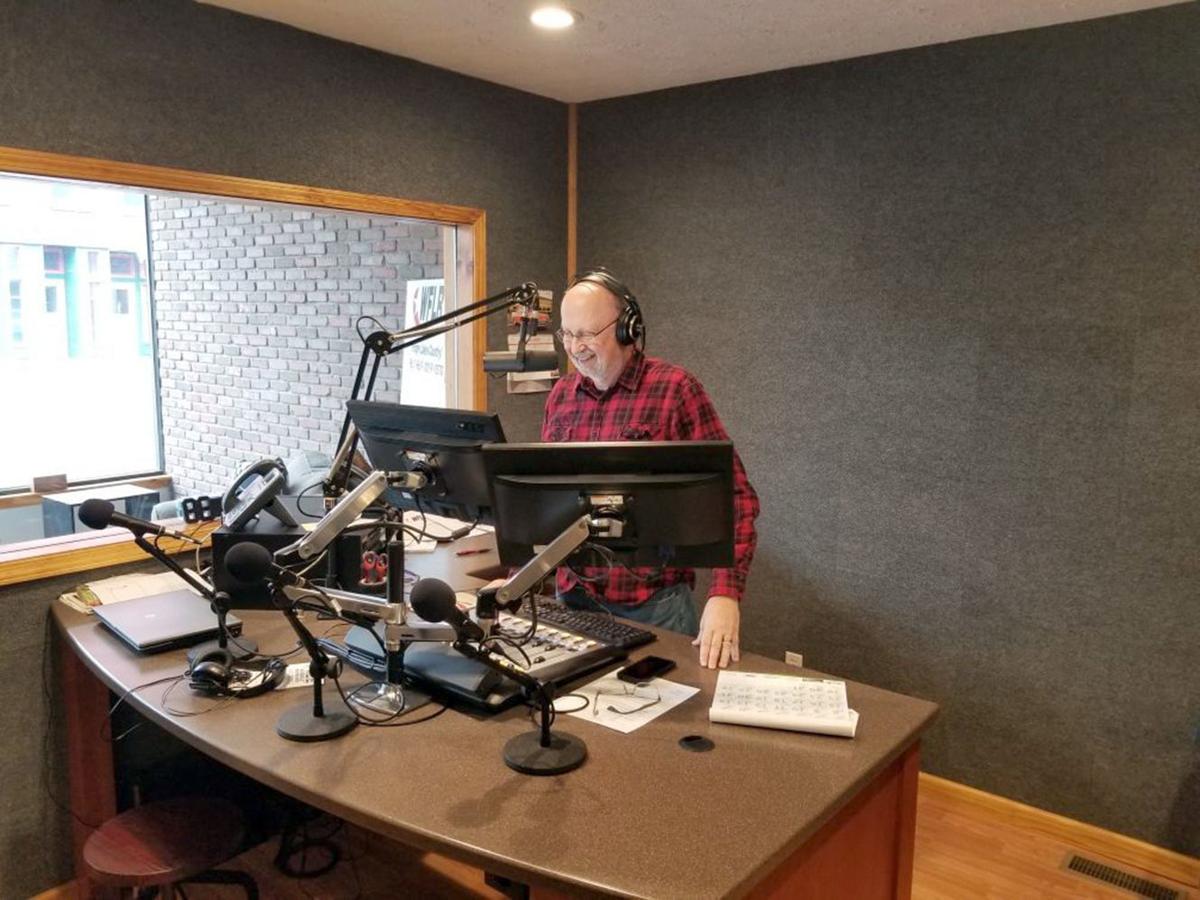 Above, Mike Smith, who grew up in the Vine Valley area of Middlesex, started at WFLR in 1977 and is in his third stint at the station. Below, he chats with students from Penn Yan Academy’s Drama Club to promote a show. 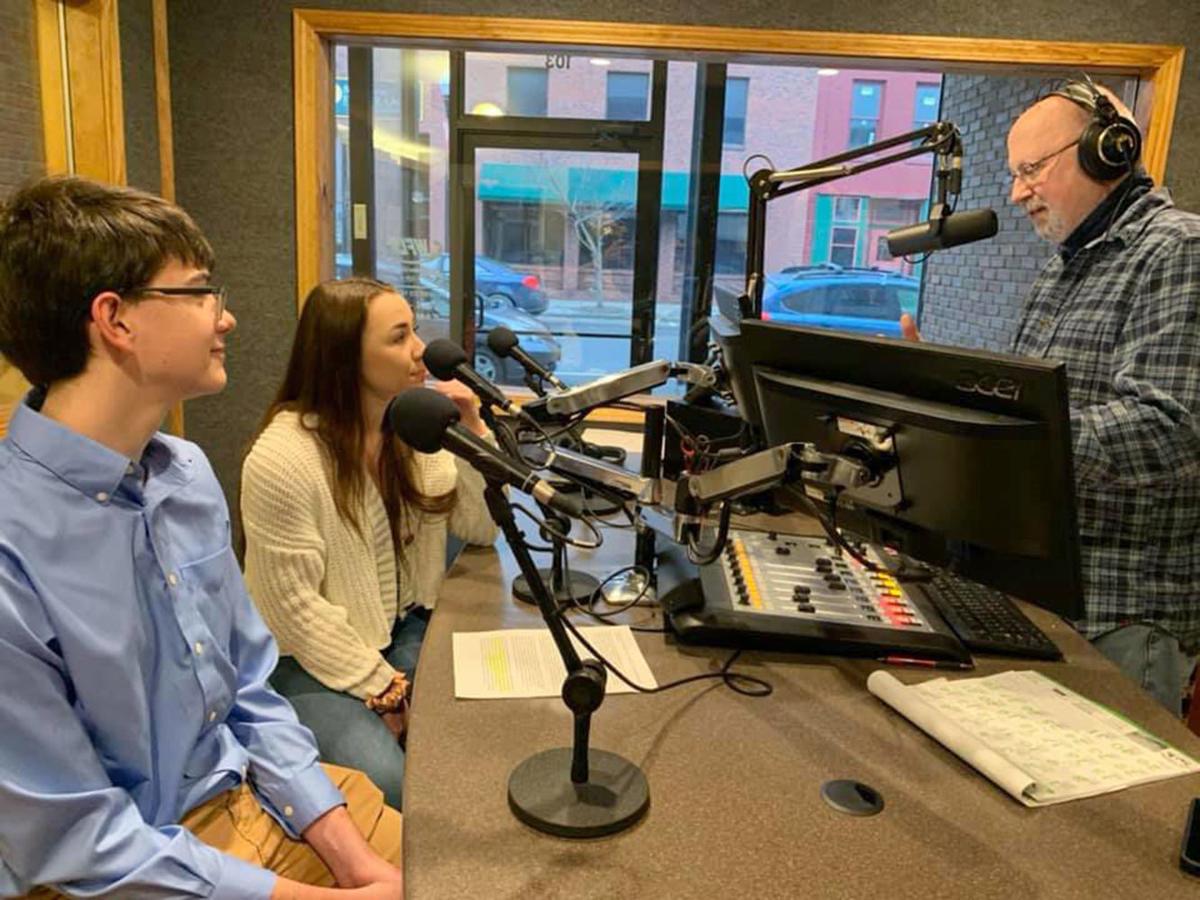 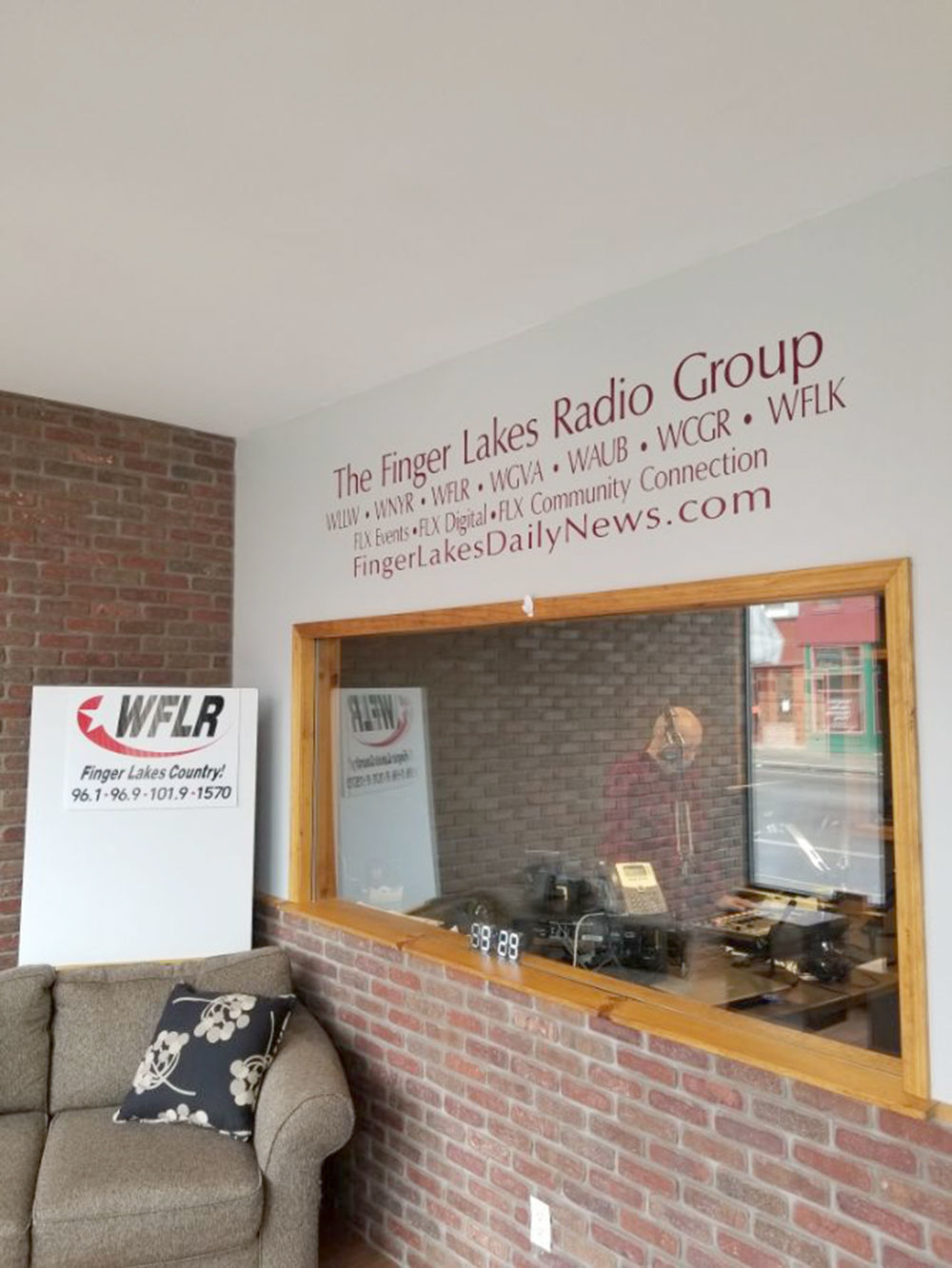 WFLR, part of the Finger Lakes Radio Group, has had its studio on Main Street in Penn Yan since 2018 after more than 60 years in Dundee. 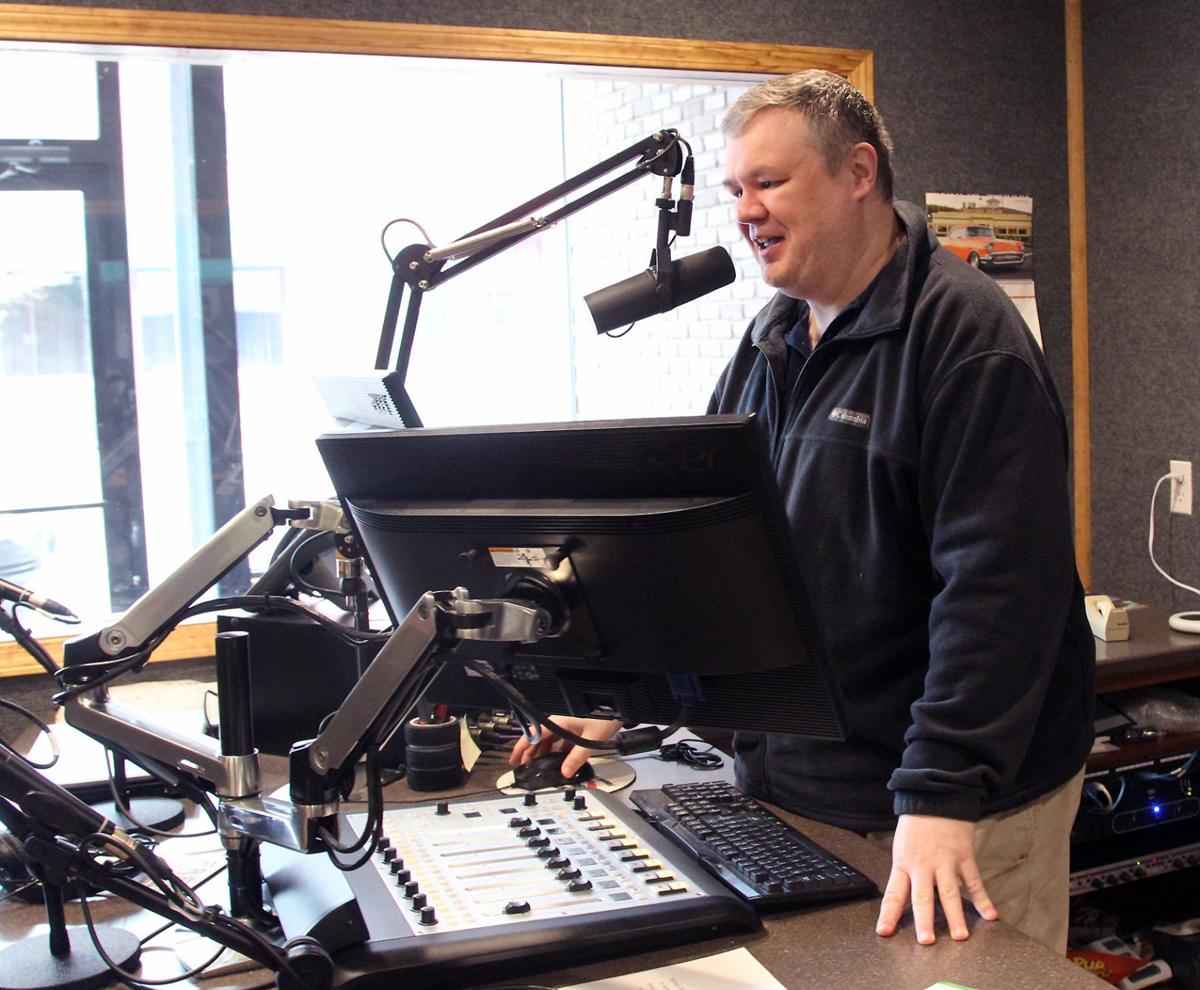 Lucas Day, the news and sports director at WFLR, has been with the radio station for nearly 20 years. 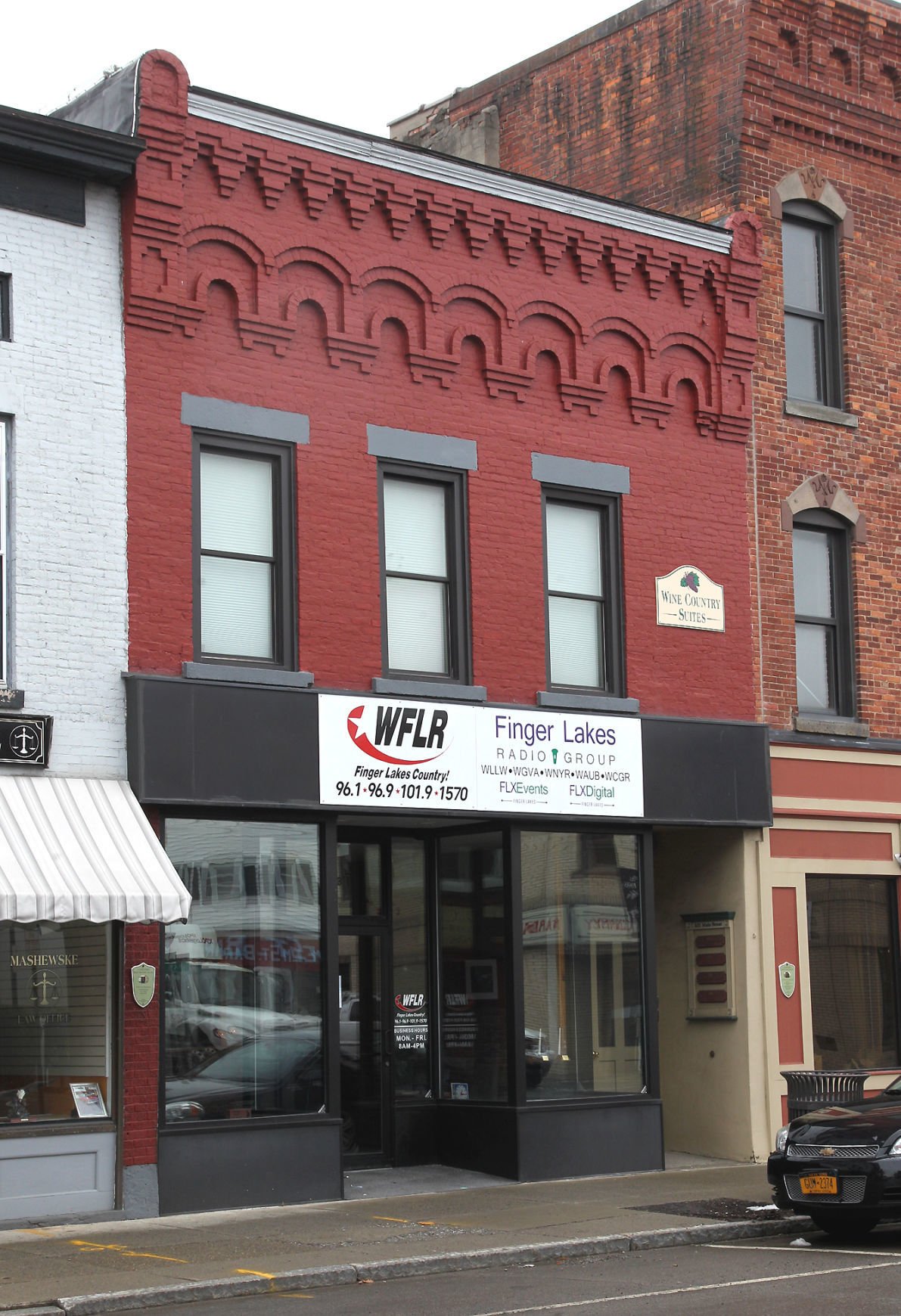 WFLR’s studio moved to this space on Penn Yan’s Main Street in 2018 after more than 60 years in Dundee.

Above, Mike Smith, who grew up in the Vine Valley area of Middlesex, started at WFLR in 1977 and is in his third stint at the station. Below, he chats with students from Penn Yan Academy’s Drama Club to promote a show.

WFLR, part of the Finger Lakes Radio Group, has had its studio on Main Street in Penn Yan since 2018 after more than 60 years in Dundee.

Lucas Day, the news and sports director at WFLR, has been with the radio station for nearly 20 years.

WFLR’s studio moved to this space on Penn Yan’s Main Street in 2018 after more than 60 years in Dundee.

PENN YAN/DUNDEE — The style of music has changed over the decades, but there has been a constant at one of the most venerable radio stations in the Finger Lakes.

“The one consistent thing has been local news, all day every day, and all kinds of local content including play-by-play sports,” said Mike Smith, who has been on the air since 1977 during three stints at WFLR. “That is really our format — local news and local sports. Everything else kind of fills the holes.”

While the local sports broadcasts have been impacted by COVID-19, the news is more important than ever.

“We want to be the go-to place for news in Yates and Schuyler counties,” said Lucas Day, the station’s news and sports director. “We’ve been reacting to this situation like everyone else in the media and doing the best we can to bring listeners pertinent, accurate information.”

WFLR was founded in 1956 by Henry Valent, a prominent Watkins Glen attorney and the owner of director of many organizations, including the Watkins Glen Grand Prix Corp., Glen National Bank and Glenfield Baxter Dairy. Tom Shafer was Valent’s co-owner and the station’s first general manager.

For more than 60 years, the studio and office was at a former bank building at the corner of Main and Hollister streets in Dundee. There were satellite offices at times in Penn Yan and Watkins Glen, and in 2018 the studio was moved to a storefront on Penn Yan’s Main Street.

There have been a number of memorable personalities at WFLR over the years, including Jim Whiting, a Watkins Glen native who was the station’s first “morning man” in 1956. Whiting later became a renowned national cartoonist who retired to San Diego after 28 years at the station.

Bob Burns was WFLR’s general manager for 20 years. Robert William Nenno, who was known to some as Bob and others as Bill, was the station’s sales manager. He hosted a popular program called “Serenade for Sunday.”

Dundee’s Ron Tomion was the station’s engineer for 35 years. Penn Yan native Bob Penrod, who was in high school when he heard Burns speak at a civic club meeting, started his broadcasting career at WFLR and went on to manage stations in other parts of the state.

In 1968, WFLR-FM was added to the AM, allowing the station to broadcast before sunrise and after sunset. To cover the extended hours, the station started using automated programming.

Wayne County native Jack Clancy started working at WFLR when he was in college; in 1976, he and Penn Yan businessman Don Stork bought the station. Clancy, who would later own other stations in New York and Florida, still lives in Penn Yan after retiring as commissioner of the Finger Lakes state parks.

“I grew up in Yates County, and that is the reason why Jack hired me in ’77. He figured if he hired people from out of town, they would think there is nothing to do and leave,” Smith said with a laugh, before adding with a laugh, “Growing up in Vine Valley (Middlesex), Dundee was the big city to me. I remember working with Jim Whiting. As a kid listening to radio station, you always heard all these deep-voiced disc jockeys with fake names. Jim said just be yourself.”

Some other notable WFLR personalities and managers over the years include Phil and Paul Mann; Criss Onan, who is the station historian; Rich Basler; Dick Evans; Dave Garvey; Chris Petersen; and Jim Schreck. Sylvia Cadwell and Connie Prior were the office managers for many years, and Dundee native John Wiedemer has been the longtime senior account executive, handling advertising sales.

For decades, well-known area meteorologist Kevin Williams has been doing the weather on WFLR. The station is 1570 on the AM dial and has three FM frequencies: 96.1 for northern Yates County, 96.9 for southern Yates and 101.9 for Watkins Glen.

Day, a Prattsburgh native, has been with the station for nearly 20 years. WFLR has been part of the Finger Lakes Radio Group since 2005.

“We want to be the place for people in the community to turn to to get local information,” he said. “Like everyone else, we are trying to stay solvent from a business standpoint and help our neighbors stay afloat.”

Criss Onan of Hector, Schuyler County, who joined WFLR as an announcer — when he was just 17 — went on to a career in broadcast equipment and …