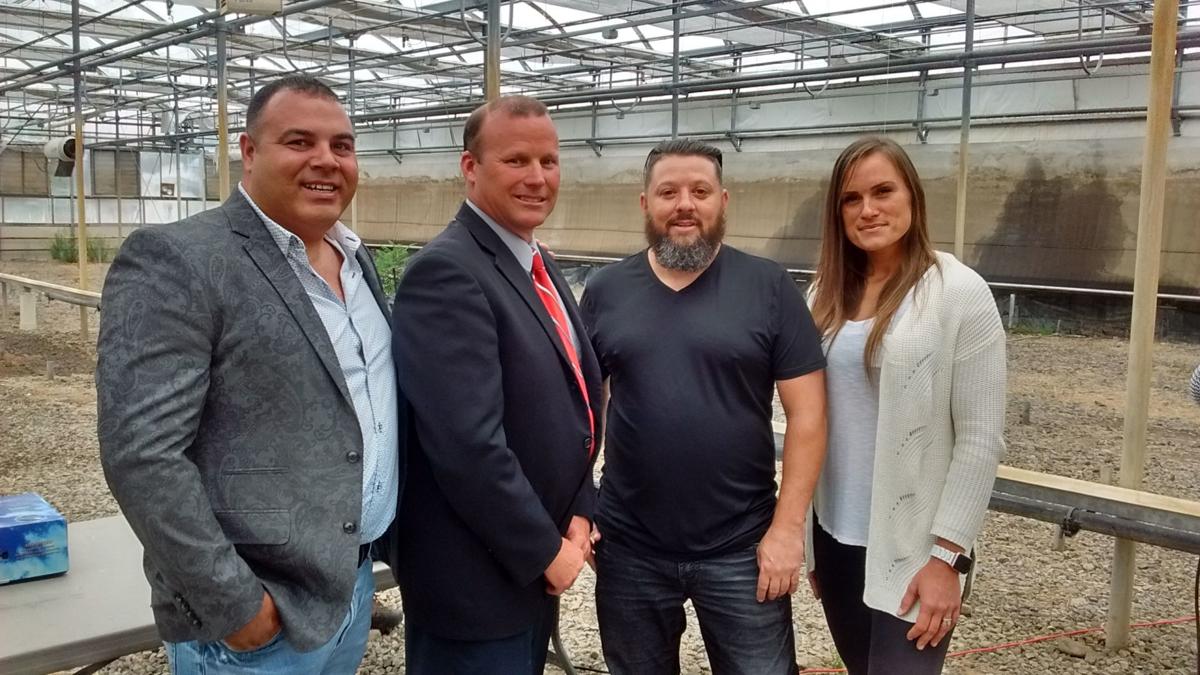 NEWARK — A cannabidiol-products manufacturer plans to invest millions of dollars into the former Jackson & Perkins greenhouse complex, where it will grow hemp seed, hemp plants and process hemp for CBD products.

The project is expected to create 60 to 80 jobs.

Honest Pharm Co., with operations in Colorado and Florida, announced in a conference at the location on Tuesday morning that it has purchased the 30-acre greenhouse complex on East Maple Avenue in Newark, where at one time Jackson & Perkins grew its world-famous roses.

The 335,000-square-foot complex was used most recently by ERP Environmental Fund, which grew trees, although never in the numbers originally anticipated.

With ERP gone, Salviski pitched the site for hemp or cannabis growing.

He found a taker in Honest Pharm, which plans to start planting in select greenhouse sections within a couple of weeks, but the company said most of the work will be making repairs and improvements. Those repairs are expected to cost at least $5 million, said Jonathan Callahan, the company’s founder and director.

“To be honest with you, it’s a great building,” he said. “A lot of people see this as a dilapidated structure, but I see this as a great opportunity.”

The goal, he said, “is to take something like this and make it amazing.”

Callahan said a greenhouse complex of this variety available for purchase is a rarity.

“You can’t find this anywhere else,” he said. “If you had a facility like this in Colorado, you’d be talking $10 million to $20 million.”

Callahan said he has been in the CBD products business for nearly four years, and before that was in the cannabis-growing industry.

“We already do this in Colorado,” he said. “This is tried and true.”

He doesn’t see medical marijuana or, if the state approves it, recreational marijuana, as markets the company is interested in for the Newark site.

The hemp and CBD products industry, said Callahan, has much more upside.

“The CBD plant — we can grow this plant and sell (products) across state lines and other countries,” he said. “Why would we want to grow marijuana plants? The market (for hemp products) is better.”

As for how the company happened upon the greenhouse complex, Callahan said it came by way of one of his partners, Jeremy Jimenez, a Newark native, whose stepmother worked there when it was Newark Florist. They discovered Salviski was selling the property, made plans to visit and put in an offer the same day.

Salviski listed it for $1.45 million but did not divulge the purchase price. He noted that Honest Pharma was not the only interested party.

“There were five offers on the table,” he said.

Mayor Jonathan Taylor is pleased to find a new use for the complex.

“This is a huge win for Newark, Wayne County and the surrounding area,” Taylor said. “You could only imagine what this place can be again.”

The repairs and complex modernization will be done by Jimenez and his company, J K Modern Construction Corp., which he operates with company partner Kristiina Nurk, who is also vice president of Honest Pharm.

Coincidentally, Nurk herself worked in the greenhouse for a short time.

Jimenez said he will hire local contractors to help do the repairs and plant modernization.

“We’re going to see how many extra hands we need,” he said.

When built out, Jimenez said, “it will be the biggest seed provider in the U.S. for farmers.”

Callahan said Honest Pharm can’t grow all the hemp that is needed for its products, meaning the region’s farmers have an opportunity to grow a crop that Jimenez said has higher profit margins than things such as corn.

“We sell the seed (to the farmers), and we take the product they produce,” Callahan said.

Cannabidiol, or CBD, is a natural compound of the cannabis plant that can comprise up to 40 percent of the phytocannabinoid content of the plant. Although there are now thousands of strains (variations) of the hemp plant, dating back millennia, Cannabidiol is one of about 100 known cannabinoids naturally prevalent in the plant. Depending on many factors, strains of cannabis can be grown for high-CBD, low-THC or high-THC, low-CBD. Tetrahydrocannabinol or THC is the psychoactive sister cannabinoid known for its euphoric effect to get you high. CBD will not get you high.