A sketch of the proposed Byrne Dairy, which would replace the current store and gas station at Castle, Milton and Main streets in downtown Geneva. 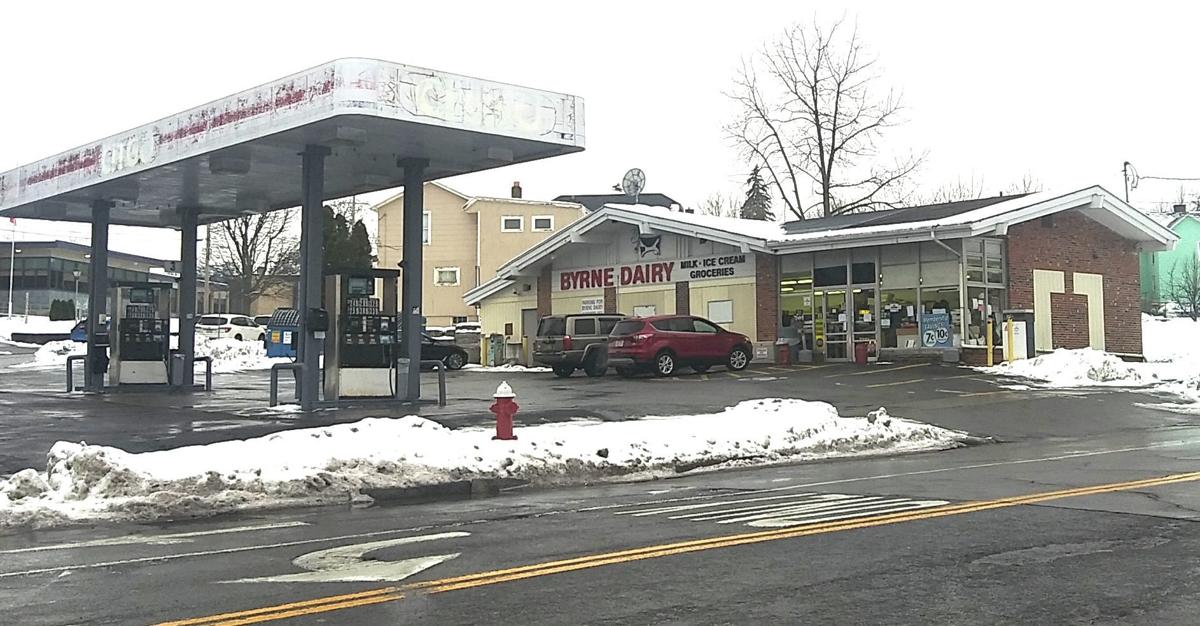 This aging Byrne Dairy would be replaced in 2020 by a modern convenience store and gas sation, if the project gets the go-ahead from the city.

A sketch of the proposed Byrne Dairy, which would replace the current store and gas station at Castle, Milton and Main streets in downtown Geneva.

This aging Byrne Dairy would be replaced in 2020 by a modern convenience store and gas sation, if the project gets the go-ahead from the city.

GENEVA — Ten years ago, the city approved a plan for a new Byrne Dairy at the busy five-points intersection in downtown Geneva, but it never happened.

Fast forward to 2019, and Sonbyrne Sales, the Weedsport-based company that develops and operates Byrne Dairy stores, is back again with plans to replace the aging store at Castle, Main and Milton streets in 2020.

The new Byrne Dairy will feature multiple gas pumps, as well as a convenience store with prepared foods and what it describes in its application as a “full line of groceries,” including a small produce section.

The city Planning Board will get its first look at the plans — very similar to those approved in 2009 — at its Monday, Dec. 16 meeting, which starts at 7 p.m. The meeting takes place at the city’s Public Safety Building, 255 Exchange St.

Neal Braman, the city’s planning and zoning coordinator and development services director, said the project was delayed because Sonbyrne didn’t want to move a person living in an adjacent home that needs to be razed to create a large-enough parcel for a 4,232-square-foot store. Legal papers were signed that allowed her to live there until she was unable to do so.

“She was granted life use,” Braman said. “That’s impressive.”

He said the woman living in the home has since died, however, and thus Byrne Dairy is now ready to go forward with the project.

The home where the person lived, at 36 Milton St., would be razed, as would the current store, fuel canopy, pumps and tanks.

Five tax parcels, including a cleared one at 221 Castle St., will be combined into one to create a nearly 1-acre site for Byrne Dairy, said Sonbyrne in its application to the city.

The store would be open all day, every day.

The project needs site plan and subdivision approvals, as well as a special-use permit required by city code for service stations, Braman said.

At its Dec. 16 meeting, the Planning Board is expected to schedule a public hearing in January for the subdivision and special use permits.

“They would love to have their approval in January,” said Braman, who said Sonbyrne told him the project should take about three months — from clearing the parcel to finishing construction.

“It will be a great improvement to that corner,” said Braman, who said it’s possible the city’s Zoning Board might have a role in the city approval process as well.

“Byrne Dairy’s new facility will enhance a key community corner and compliment the upcoming streetscape and library improvements,” she said by email. “In addition, Byrne Dairy’s offerings of grocery items, including fresh fruits and vegetables, is a step in the right direction for providing food access to our residents.”

The project also will be reviewed by the Ontario County Planning Board on Wednesday, Dec. 11, said the city, with the board providing comments following the session.

Christian Brunelle, chief operating officer for Sonbyrne Sales, said he had no comment on the project at this time but will once it moves closer to construction.