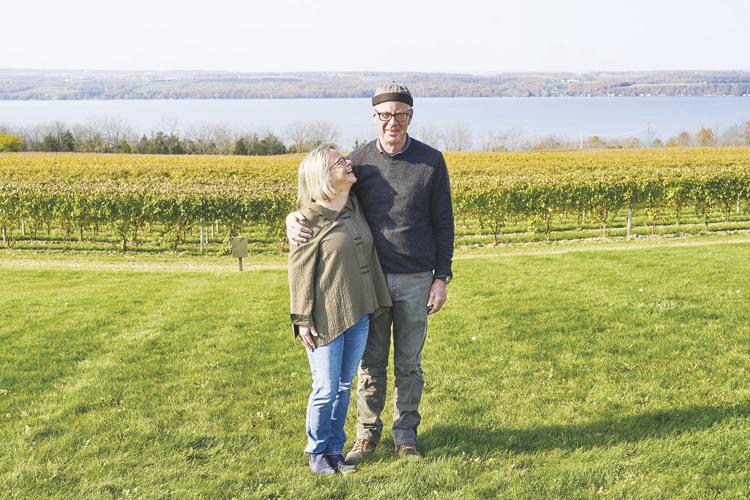 Diana Lyttle and Bruce Murray are shown standing in the Boundary Breaks Vineyard with Seneca Lake in the background. 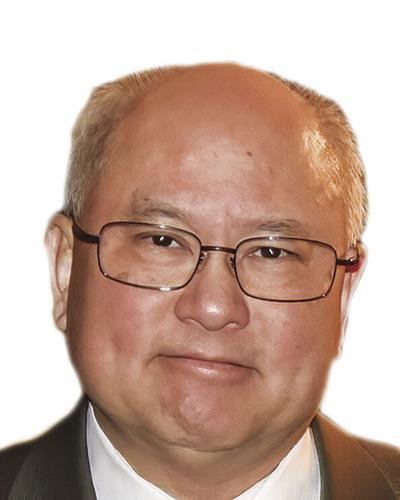 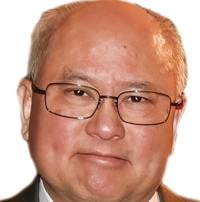 If you live long enough, there comes a time when you get to a crossroad in life, where the choices are either to play it safe or take a leap into the unknown.

For Bruce Murray, that happened in 2007. He had just sold his small tech startup.

Murray’s family moved from Vancouver to Syracuse in 1961 when his surgeon father took a job at the Upstate Medical Center. He went to Nottingham High School and dated a classmate named Diana Lyttle.

After high school, Murray and Lyttle went their separate ways. He attended Yale, majoring in English literature; she went to the University of New Hampshire, studying botany and plant science. Their romance ended, only to be rekindled decades later.

“When I graduated, it was just after Watergate and I wanted to become a journalist,” Murray said. “I landed in Silicon Valley, covering the tech world in those heady times of the 1980s.”

One of those tech companies offered him a job. He worked there for five years, soaking in the California wine and food culture.

“I loved it out there,” Murray said, “but I came to realize that I wasn’t a product engineer.”

He returned to the East Coast in 1986 to work for Newsday for 10 years — first on the circulation business side, then the advertising side.

“I was one of those big corporate young men on the rise,” Murray said.

By the mid-1990s, the internet was burgeoning. A friend from Silicon Valley called and told Murray his company had just invested in a guy who wanted to put the Yellow Pages online and to monetize it by selling local ads.

“He said the guy didn’t know much about local advertising, and could I talk to him,” Murray recalled. “I did, and I became that company’s employee No. 8.”

The company was the Zip2 Corp. Its founder was none other than Elon Musk. It was Musk’s first company.

Musk sold Zip2 in 1999, and Murray was rewarded with a small nest egg.

“I thought I would use it to start my own company to crawl the internet and collect data on job openings.”

“I said to myself, ‘I am 51, what am I going to do next?’” he said. “I was divorced. My twins were off to college. I was used to being the boss. I was told that I had gotten too old for the tech world. It was time for a change.”

The answer came to him at a party back home in Brooklyn, when he met a couple from Trumansburg.

“I started talking to them, and they said they grow grapes out there in the Finger Lakes,” Murray said. “I loved rieslings, and I knew that the Finger Lakes was a great place to grow it. And, I could solve two problems at the same time, as my dad was getting up in age and was still living in Syracuse.”

Diana Lyttle also had aging parents still living in Syracuse. They had kept in touch, and their paths crossed frequently there. Lyttle was married and a teacher living in Connecticut.

Murray kept a day job, for the time being, since the company that bought Corzen convinced him to stay as the CEO for the merged creation. However, he also started looking for property in the Finger Lakes.

“I got a call in December of 2007 from a friend,” Murray said. “He told me about this crop farm for sale, and that I should just buy it and not haggle about the price.”

Murray bought the 120-acre property and named it Boundary Breaks, referencing the gorges at the boundaries of the property.

“In 2010, I hired a vineyard manager and bought equipment. Money started hemorrhaging,” Murray lamented. “I began to realize that this was an expensive undertaking. No wine was made yet. No cash flow!”

Boundary Breaks’ first harvest was in 2011. But, Murray had no production facility.

“My plan was always to have my own label and not just sell the grapes,” he said. “When the time came to decide what to do with the grapes, I thought it would be great if some of the best winemakers here would make the wines for me.”

Contract winemaking was and is still a regular practice in the Finger Lakes. Peter Bell at Fox Run Vineyards made the inaugural vintage for Murray. However, that vintage marked the beginning of a decade-long struggle for him.

“I thought I would sell all of it to a distributor, so I wouldn’t need a tasting room,” he admitted.

Luckily, he had kept his day job. He read a blog post from Jason Haas of Tablas Creek, a renowned winery in California. Haas wrote that he was barely breaking even until he started selling directly to consumers.

“I thought if a winery such as Tablas Creek couldn’t make it by selling all his wines to a distributor, we had little chance of succeeding,” Murray said. “In 2014, I called an architect to design a production facility and tasting room.”

Meanwhile, Murray began pursuing Lyttle. “She was the one that got away!” he exclaimed.

In 2012, Murray and Lyttle moved in together in the Hudson Valley, halfway between the Finger Lakes and Connecticut. With her plant botany background, Lyttle would prove to be an invaluable asset in the vineyard.

The architect came back with a cost estimate of $4 million.

“I could only afford $2 million by cobbling together a chunk of my money plus some money from the bank,” he said.

Construction on the tasting room started in 2015; it opened the next year. Then, Murray took another big risk.

“I was now heavily in debt. I had little financial cushion left,” he said. “I realized that this had better work. I quit my CEO job and devoted full time to Boundary Breaks.”

Murray moved into the little house on the property in 2016. Diana joined him in 2017. They were married that year at Boundary Breaks.

Without a winery, Boundary Breaks is at the convenience of other wineries’ excess capacity. Besides Peter Bell, his wines were crafted over the years by renowned winemakers that included Dave Breeden, Chris Stamp, Derek Wilber, Ian Barry, Kelby Russell, Julia Hoyle, and Kim White. However, the effort continued to bleed money.

“By 2018, we were still not making a profit,” Murray said. “Every year, I put in more of my own money. I was tapping my generous and trusting siblings for capital to keep the business going.”

Others might have given up, but Murray and Lyttle soldiered ahead.

Then came the winter of 2019 and Covid-19. Things looked grim at the onset, but federal relief funds helped blunt the economic impact. As wineries reopened, something unexpected happened. Gone were the tour buses that dropped in 50 visitors who seldom bought any wines. Instead, the clientele proved to be more sophisticated since wineries were one of the few places people could still visit during the pandemic.

“Covid helped! We had fewer but better visitors. Our wine club really took off,” Murray said. “2021 is going to be the first year we make a profit. It’s taken 13 years. We are going to build a winery and a warehouse in stages over a few years.”

Throughout its struggles, one thing was never in doubt: Boundary Breaks’ quality. While their rieslings have been outstanding since day one, don’t overlook their reds. Those varieties ripen well in the vineyard’s excellent location. Their flagship red, The Harmonic, is a dead ringer for a good Bordeaux in warmer vintages. Total wine production is now around 13,000 cases annually.

Success wouldn’t have been possible if not for Murray’s perseverance and willingness to take risks.

“When I first started working for Elon Musk, I was a singles hitter and he was a home run hitter, to put it in baseball terminology,” Murray remembered. “Working with Elon taught me that it’s OK to take risks.”

He feels very fortunate to have been reunited with Lyttle.

“Not everyone is lucky enough to have a person you reconnect with who is so willing to dive in and work with you,” Murray said.

Looking back, Murray has few regrets.

“I definitely would do it again, but I would also plant cabernet franc and merlot from the start,” he said. “Riesling makes magnificent wines, but just not the most popular ones.”

After spending 30-plus years running the day-to-day operations of media companies, Dave Sit moved to the Finger Lakes to pursue his many passions, of which wine and writing are two. His “Wine Ranger” column appears the first weekend of every month. Contact him at flxwineranger@gmail.com.

Bruce Murray's long struggle to turn Boundary Breaks into a profitable winery received a big-time boost this month. The winery's Riesling Finger Lakes Dry No. 239 2019 appeared at No. 86 on Wine Spectator's list of the Top 100 wines worldwide. According to the description in the magazine, the wine is named for the clone from which it's made. The dry white is fermented and aged in stainless steel. Boundary Breaks, which is in the Seneca County town of Lodi, was the only Finger Lakes winery to crack the Top 100 in 2021.