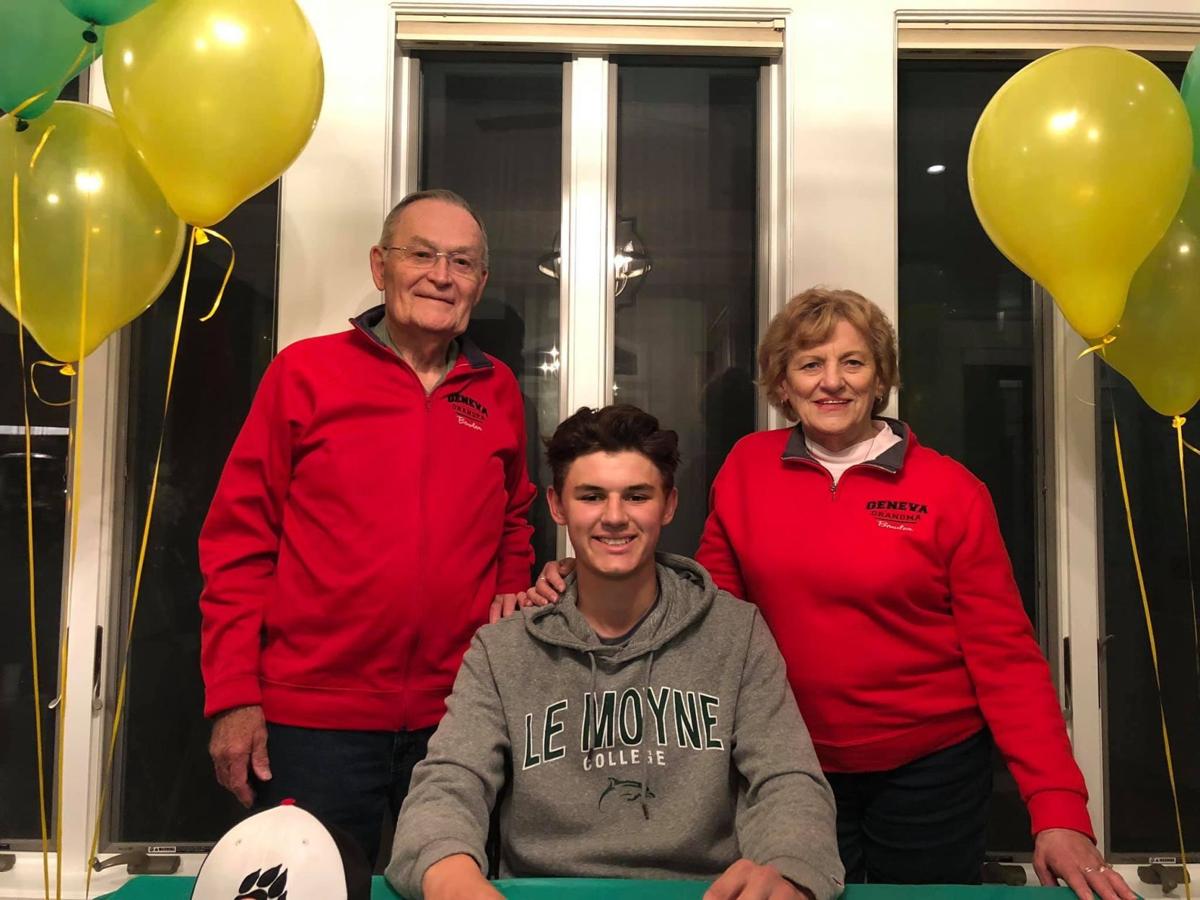 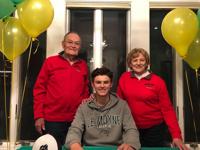 Geneva senior Michael Bowler signs a National Letter of Intent to play baseball at Le Moyne College with his proud grandparents with him.

Geneva senior Michael Bowler signs a National Letter of Intent to play baseball at Le Moyne College with his proud grandparents with him.

GENEVA — High school baseball did not get a chance to have a season in 2020, yet a pair of Geneva High School seniors still attracted the attention of one of the nation’s finest Division II institutions.

“It was amazing,” Patchett said about his signing. “Once I signed it was so stress-relieving. I am so excited. I’m ready to work and get at it.”

“I know that Le Moyne’s baseball program has a lot of accolades and they have a great reputation,” Bowler said. “I know that that’s a place where I can go and develop my skill and hopefully one day continue with my baseball career.”

Not only did the program’s success attract the two, Bowler mentioned the campus itself had exactly what he wanted.

“I feel that Le Moyne was that perfect blend of the city and enough space away where you’re not right on top of everyone,” Bowler said.

“I’m very proud of them. They’re great young men,” Geneva baseball coach Jason Michaels said. “They come to practice everyday and work hard, and I am proud to see their hard work pay off.”

Le Moyne gets teammates and friends in Patchett and Bowler. The two have been a part of the same travel baseball team as well as the Panthers since they were freshmen. Behind the plate, Patchett has caught Bowler’s pitches for several years.

“It makes the transition a lot easier,” Bowler said signing alongside Patchett. “The chemistry that him and I already have and it helps that you have a teammate that you can rely on that you already have for so long.”

The signings took place at the player’s respective homes, complete with yellow and green balloons.

In 2020, Le Moyne managed to squeeze in 16 games, going 9-7 before the world fell into pandemic chaos.

“Le Moyne was just the best fit for me as a student and an athlete,” Patchett said. “The program is great, has great records, and is a perfect fit.”

Patchett and Bowler believe they can make an immediate impact on the team.

“My first goal is to go out there and compete,” Bowler said. “I want to be able to push my teammates and make sure everyone is rising equally. A team with one superstar and no one else is pointless, but when you have a team full of everyone that is grinding and working together, that bonding and chemistry just works better.”

It’s one thing to talk the talk, but both Patchett and Bowler back it up every day, according to their coach.

“Those two are competitors,” Michaels said of Patchett and Bowler. “They really carry themselves the right way on and off the field and they’re role models. I think others see how hard they work and want to follow suit. They have great character and are great players and even better people. Le Moyne is certainly going to benefit from having them on the field together. I’m excited for them and excited for Le Moyne baseball program. I can’t say enough about those two.”

Both are eager to get back to baseball and especially eager to make an impact at the collegiate level. For now, they’re just hoping to have a senior season.

“I’d take any chance I can to play baseball,” Bowler said of his senior season. “I’ve been sitting in my house working out and going crazy, so yeah, for sure I’ll be playing.”

“If there’s a baseball season, I’ll be on the diamond,” Patchett stated.