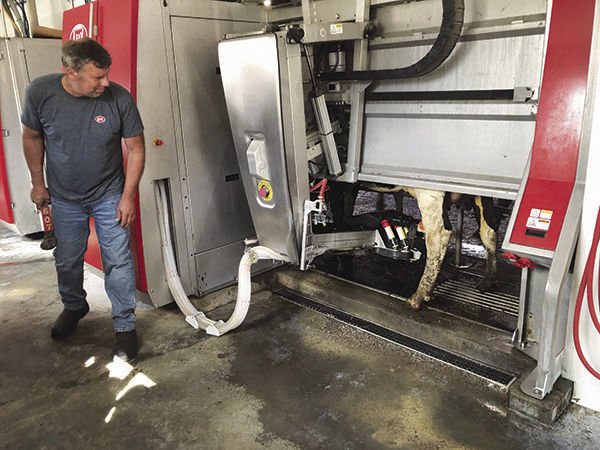 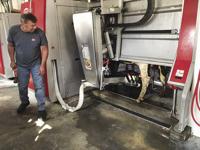 Jack Persoon demonstrates the robotic milking machine on his family’s dairy farm that has allowed the farm to increase its milk production and enabled him and his wife to focus more on taking care of their animals. 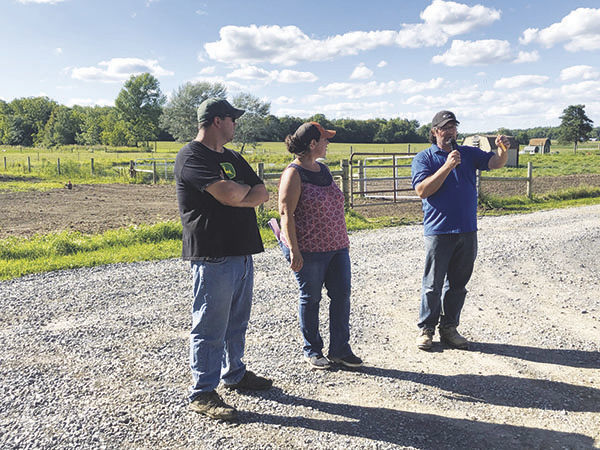 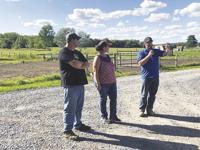 As Tim and Sarah Haws look on, Chris Creelman, of Seneca County Soil and Water Conservation District, talks about the grazing system he helped Autumn’s Harvest Farm create to be more efficient and sustainable in feeding its livestock. 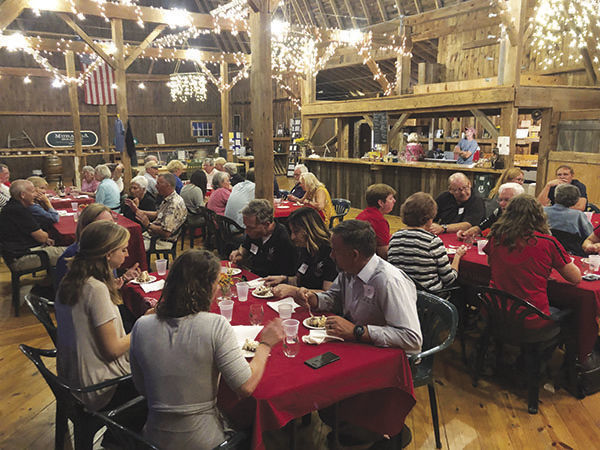 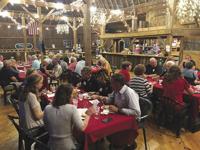 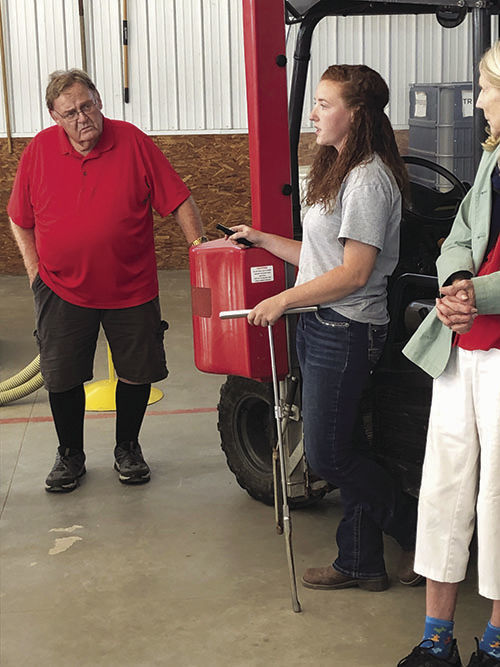 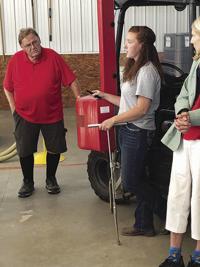 Heidi Lott shows off a machine that her family’s cash crop farm uses to take soil samples in order to gauge the level of nutrients and other characteristics about the soil.

Jack Persoon demonstrates the robotic milking machine on his family’s dairy farm that has allowed the farm to increase its milk production and enabled him and his wife to focus more on taking care of their animals.

As Tim and Sarah Haws look on, Chris Creelman, of Seneca County Soil and Water Conservation District, talks about the grazing system he helped Autumn’s Harvest Farm create to be more efficient and sustainable in feeding its livestock.

Heidi Lott shows off a machine that her family’s cash crop farm uses to take soil samples in order to gauge the level of nutrients and other characteristics about the soil.

When it comes to local farms, what is good for the environment is often good for business, too.

That is what a group of close to 50 people — ranging from local elected officials to people involved in some aspect of farming to those just curious to learn more about farming — discovered Thursday afternoon during the biennial Tour of Agriculture.

Before sitting down to a belly-filling dinner and dessert at Muranda Cheese Company in Waterloo, participants visited three local farms – Persoon Dairy in Interlaken, Autumn’s Harvest Farm in Romulus and Lott Farms in Waterloo. In addition to seeing a dairy farm, a livestock operation and a cash crop farm in action, participants heard from the farmers themselves on what they are doing to ensure their farms are both environmentally friendly and economically sustainable.

“With HABs [harmful algal blooms] and these water quality issues, there’s increase in concern from the public and the community about what the source of those are,” Soil and Water Conservation District Manager Erin Peruzzini said. “We’ve felt like there’s a lot of misinformation and misunderstanding about farming practices and wanted to just educate the public on some of the projects — innovative and progressive projects — that the farmers are doing to help address the concerns.”

She noted previous tours were targeted at Seneca County supervisors to encourage them to support the budgets and missions of the organizations, but this year’s tour was opened to the public to reach a different audience and a different need.

Judy Wright, agriculture economic development specialist for Cooperative Extension, added that farmers don’t want to do things that would harm the environment — such as losing topsoil to erosion and runoff or using too much pesticide or fertilizer — because those things also would hurt their businesses.

“It’s important for the non-farm community to hear that directly from the farmers,” Wright said. “The fact that we had three different types of farms all convey the same message was important, that as a community, the farm community does care about the environment and is working hard to do the best they can.”

At Persoon Dairy, Jack and Jen Persoon spoke about the 100-plus cow and 300-acre crop farm they have operated since moving to Seneca County in 1998. Son Jake Persoon works away from the farm as an environmental consultant, so he is able to help his parents be good stewards of their land and animals.

He specializes in nutrient management — testing both the manure and the soil to gauge how much manure is needed in the soil in order to reach optimal crop yields and lessen the need for fertilizer. The manure can be injected into the soil to prevent runoff and help retain nutrients.

At Autumn’s Harvest, Tim and Sarah Haws talked about how their livestock operation has grown from six chickens and two cows on five acres nearly 20 years ago to several hundred acres with cows, goats, chickens and pigs along with geese, quail, rabbits and turkeys at various times.

One of the keys to being environmentally friendly, Tim Haws said, is to raise animals that eat different kinds of vegetation rather than compete with one another for food.

“Our farm has a little bit of everything,” he said of the diversified livestock. “What we’re trying to do is use animals that complement each other.”

At the first two farms, Chris Creelman, technician with Soil and Water, talked about some of the projects the organization has done through the Agricultural Environmental Management program funded by the New York State Environmental Protection Fund.

At Persoon Dairy, for example, Creelman helped the Persoons rearrange the calf hutches to restrict access to a nearby stream and provide a buffer for runoff. That project not only helped water quality but also made the operation more efficient.

At Autumn’s Harvest, Creelman helped the Haws create a grazing system in their pastures that both protected the water and land resources on their properties and ensured their animals have healthy grazing feed throughout the seasons.

“It’s a lifetime commitment,” Creelman said, noting he stays involved with the farms even after their projects end. “It’s important that farms follow up with me.”

At Lott Farms, Mark Lott, wife Kathy, and daughters Heidi and Tamara highlighted the soil management practices and other techniques they use in their 2,300-acre crop farm that was started in 1996 and specializes in corn, soybeans and wheat.

“Each part has a thing it does (for the soil). It’s like our community. Everybody has something to do,” Mark Lott said of how the cash crops and cover crops work together to keep the soil healthy. “When we lose soil, we can’t put it back. It takes a lifetime to make topsoil.”

With a final stop at Muranda Cheese, participants gathered for a dinner catered by Simply Homemade using ingredients from the featured farms and other producers — pork chops, sausage and bacon from Autumn’s Harvest, milk from Persoon Dairy, corn from Lott Farms, vegetables from Lisie Freier and ice cream from Cayuga Lake Creamery.