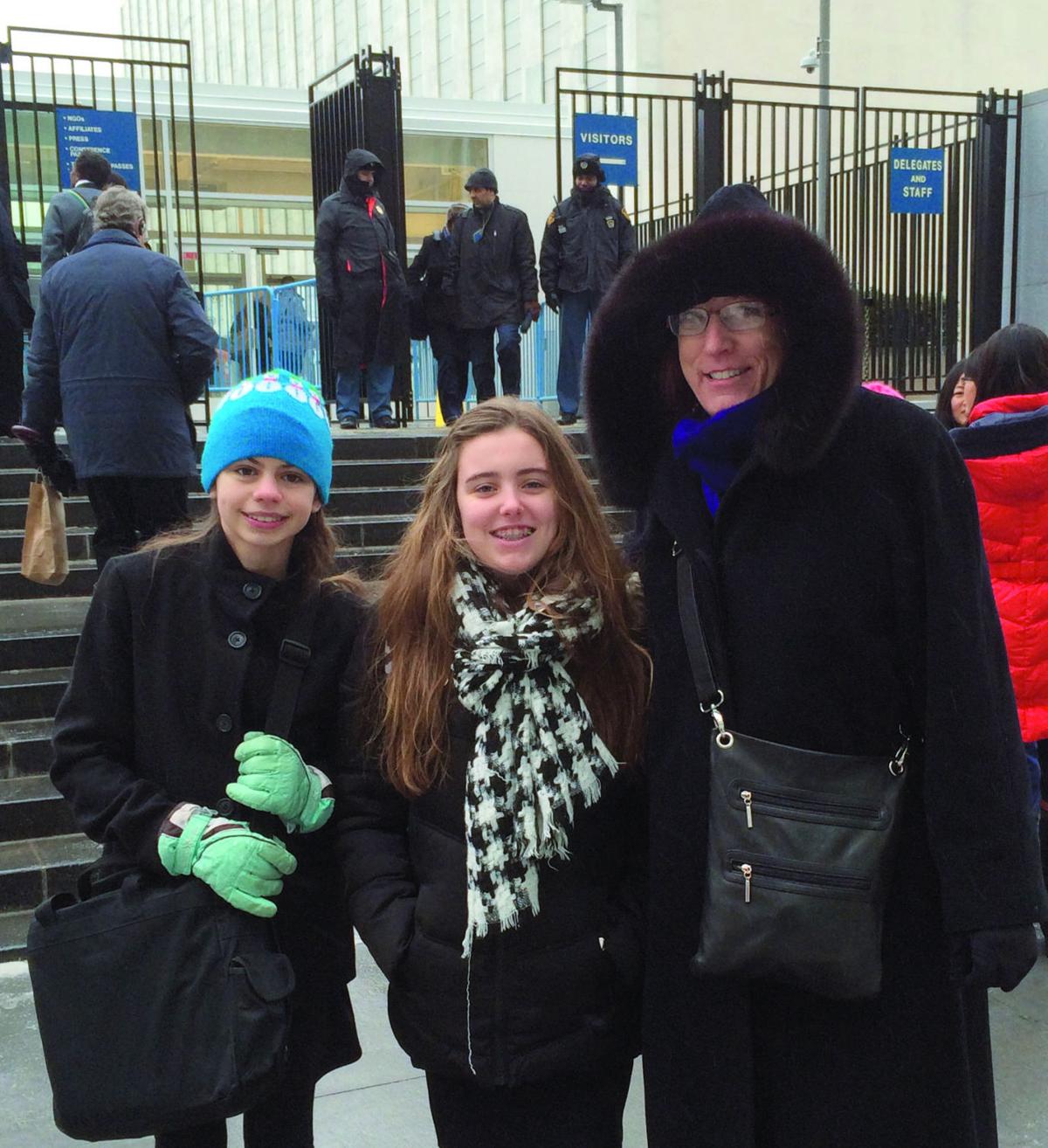 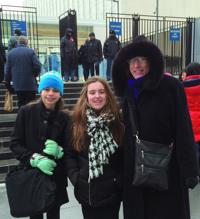 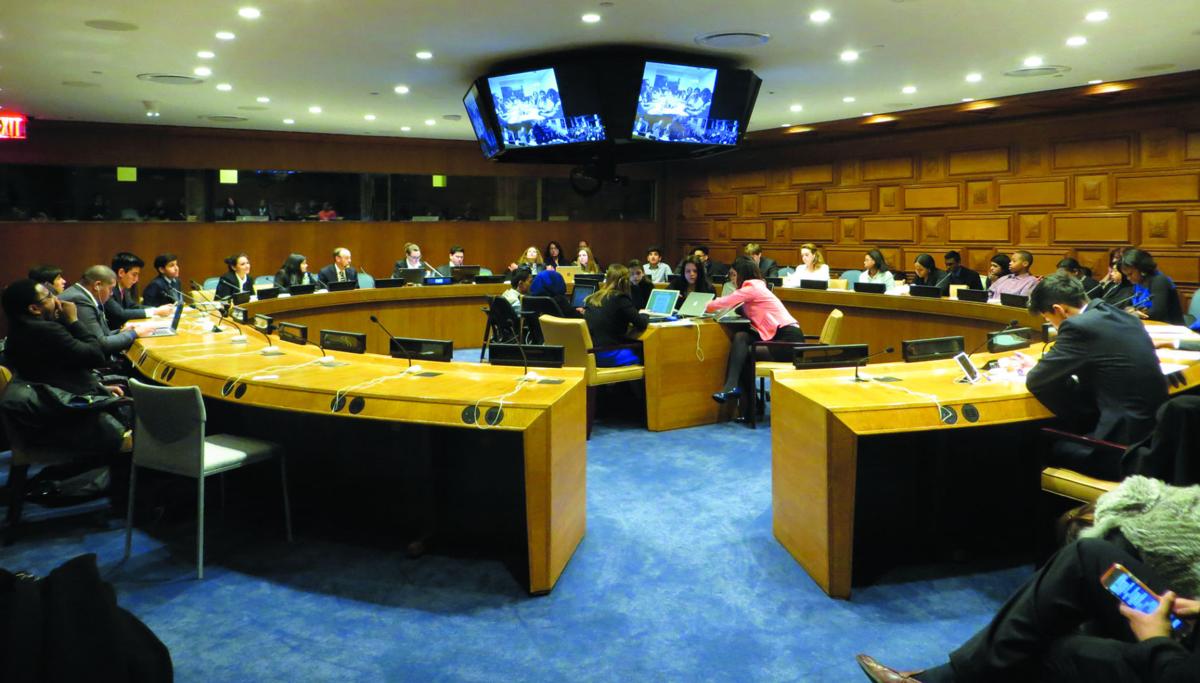 “My work is about bringing the world into my classroom,” Shaffer said recently, as she sat in her empty room during the last week of school. “It’s appropriate for young adolescents — whose brain is developing faster than at any other time other than infancy — to have intellectual experiences and social/emotional experiences to develop their identities.”

And, in the rural, predominantly white South Seneca school district — 50 percent of the students are considered at the poverty level based on free and reduced lunch guidelines — this class introduces them to a world they might not otherwise see.

Shaffer, a New Jersey native, graduated from Eisenhower College in Seneca Falls and worked at Philips Electronics Components before going back to school to earn her teaching degrees from Nazareth College in Rochester. After teaching French in Dundee for a year and elementary students at St. Michael School in Newark for two years, she landed in South Seneca in 1999.

There, she also inherited a live videoconferencing system from teacher Tony DeFranco, and her distance learning class was born.

Shaffer’s classroom is decorated with flags from such countries as Canada, Pakistan, Nigeria, Saudi Arabia, South Sudan, Poland and many more ... countries her students have interfaced with, often with the assistance of the non-governmental organization Global Education Motivators. She described the videoconferencing system as akin to Skype, but with a higher resolution, and said it was put into action about six times this past year. About 80 students in grades 6 to 8 took the elective in 2014-15.

Shaffer always starts the year off with what she calls “the words” — foundational documents from which the rest of the year organically develops, she said. Those documents include the Universal Declaration of Human Rights; the Millennium Development Goals (eight international development goals established following the 2000 Millennium Summit of the United Nations); the 12 Principles of Democracy; and an in-house document Shaffer prepared called “Words to Deeds.”

From there, the students, either individually or collaboratively, pick projects to take the words and concepts they’ve learned and transform them into deeds ... both locally and internationally.

A quick glance at the student-designed T-shirt for the year lists the different projects the students took on — from raising money and collecting supplies for the Beverly Animal Shelter to making donations to a school in Uganda and a community women’s group in the Amazon.

One project that stood out this year was what became known as the school’s Human Food Chain.

Although for years South Seneca students and staff have collected supplies for the Ovid Food Pantry, this past fall their method of delivery changed. All middle-school staff and students formed a human “bucket brigade” to pass the canned goods from person to person, through the school and out to a flatbed truck in the parking lot.

Shaffer pitched the idea after reading an article in the Cornell alumni magazine where a similar approach was used to transport flats of flowers for a landscaping project.

“It occurred to me that would be really cool to do with our food bags,” she said

Shaffer admits she lost faith at one point because food donations were not coming in at a healthy clip, but someone donated a large heart pillow to raffle off and students earned one raffle ticket for every can they brought in.

The food chain is emblematic of Shaffer’s hands-on approach, one she believes benefits all students — not just the smartest.

“Even the non-performers will do anything you ask; they interact at levels they won’t with a textbook or homework packet,” she said. “It’s always been the case.”

Superintendent Steve Zielinski said the district has taken great pride in the distance learning program at South Seneca for many years. He called the class unique and deeply meaningful for South Seneca’s students.

“Thinking about the impact for students, it’s almost immeasurable in terms of the lessons kids learn as they interact with people who are lifelong Seneca County community members, and others who visit us from backgrounds and networks around the world,” he said. “Turning all this activity into a chance to make a difference for their friends leaves a lasting impression, we believe, on our students.”

That’s been the case for eighth-graders Maddy Houck and Maddie Welch.

Welch, the daughter of Cassie and Todd Welch of Interlaken, took Shaffer’s class for two years and worked on such projects as HIV-AIDS, partnering with a school in Ireland, the local Red Bookshelf program and raising funds and supplies for local veterans.

“We get to choose our own projects,” Welch said. “I absolutely love distance learning. I’m the president. It’s an amazing class.”

Welch said before she took the class she was largely unaware of what was going on in the world. Distance learning has broadened her horizons and helped her grow academically; Welch said she loves comparing her sixth-grade essays with those she wrote this past school year to see the improvement.

“It’s definitely made me love the world even more,” she said. “It’s made me open up ... I really don’t know what the future holds, but I know when I’m older I’ll do as much for the world as I can.”

Maddy Houck, the daughter of Jeff and Stephanie Houck, took the class for 1 1/2 years. Her first project was a video about Cardboard City, a fundraiser where local students spend the night in cardboard boxes to raise awareness about housing insecurity. She and fellow student Julia Hubbard also researched nutrition issues around the world, prepared a plan of action and presented it at the United Nations Student Leadership Conference on Development in February 2015. Shaffer takes a few students there annually.

“Going to the United Nations Student Leadership Conference on Development was an incredible experience for me,” Houck wrote in an email. “Getting to meet people from different nationalities and interests was amazing. I especially enjoyed this because we all had a common goal: to change the world in a positive way.”

Houck said she felt Shaffer trained them well for the experience.

“Julia and I were the youngest delegates at the conference, but, even so, I felt like we were the most prepared for the conference,” Houck wrote. “Going to the United Nations helped me realize that with hard work you can accomplish anything.”

Her favorite speaker this past year was Fernando from Ecuador, largely because he exposed the students to a different culture; Houck noted many of the class visitors have been from Africa, so she enjoyed getting to hear from someone from a different continent.

Although she will head into high school and no longer be able to take the class, Houck said she hopes to remain involved with the program and will encourage more students to get involved.