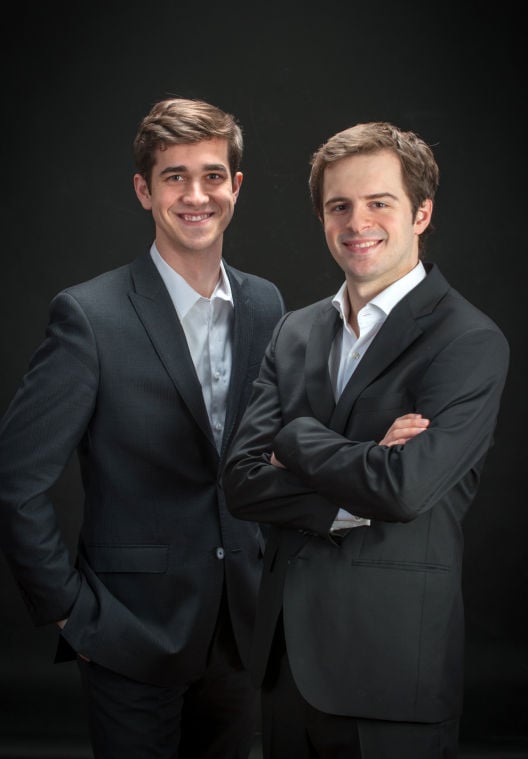 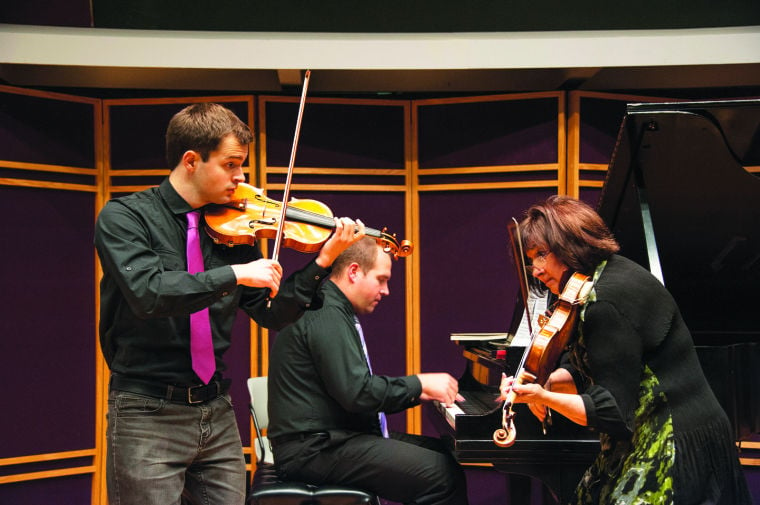 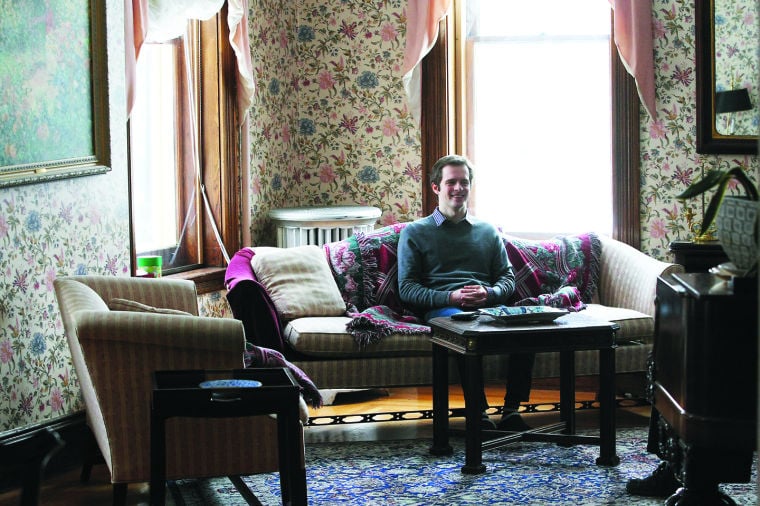 Geoffrey Herd sits in the living room of his parents' North Main Street home in Geneva. 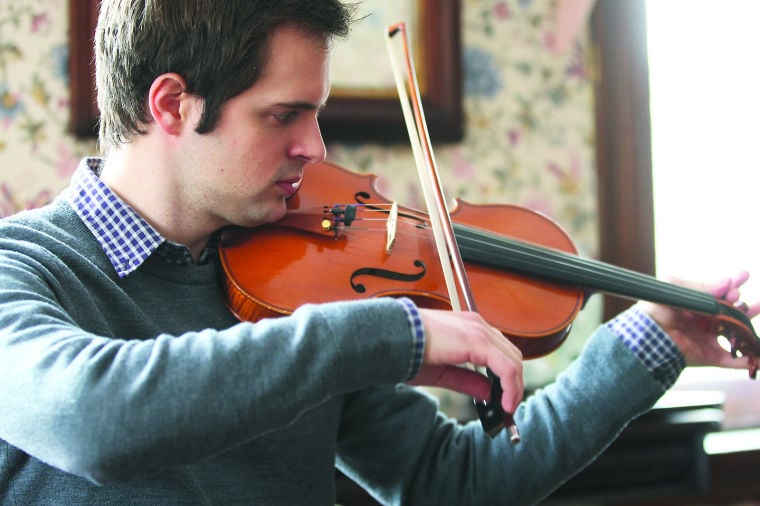 Geoffrey Herd sits in the living room of his parents' North Main Street home in Geneva.

GENEVA — When Geoffrey Herd picks up his violin to practice, he focuses on the technical — on finger placement, on how he moves the bow, on where it hits the string.

When he performs, as he will later this month at Carnegie Hall, a different motivation takes over.

“You just go after what lies behind the music,” he said.

Classical music moves Herd ... has moved him his entire life, actually, since he hummed along to his siblings’ piano and violin practices as he lay in his crib.

It moves him when he directs the Geneva Music Festival, moves him as he performs, moves him as he makes plans to visit remote areas of Thailand this summer to bring classical music to people who have little access to it.

Sometimes, Herd jokes, he wonders if he should get more interested in pop culture, but that’s really not his thing. He’d rather work to make classical music more accessible to wider audiences, so it can evoke the same emotions in them that it does in him.

“It’s had a consoling power for me,” Herd said. “It’s given me a way to connect with people. Sometimes, I’m not as good with words as I am with music.”

Jan Regan of Geneva has known Herd all his life and feels that connection firsthand.

“Being present when that kind of music is being made, it’s a wonderful experience,” she said. “Even if you don’t know classical music that well ... it just kind of takes you away.”

Herd, 27, grew up on North Main Street, where his parents still live, and is currently a doctoral student at Rice University in Houston.

Despite the distance, he returns home often. Last week, he was here to prepare for the March 22 show at Carnegie Hall, practicing in the same living room where he played as a child, his violin tuned for New York’s bitter, dry winter instead of Houston’s warmth and humidity.

Carnegie Hall may be the nation’s most prestigious music hall — certainly, it’s New York City’s. Its name and 120-year history carry a certain cachet that can both intimidate and inspire a performer.

Even though he has only performed there before with larger groups, Herd insists he’s “mostly excited” about the big day.

“You go more for excitement,” he said. “Nobody wants to hear you be nervous. You go to share this music with the audience, not to be nervous.”

Herd will perform with Cahill Smith, a pianist at Rochester’s Eastman School of Music. The duo will play at the Eastman Monday as a way of field testing their Carnegie Hall show.

“I think we have a really interesting program, and we’re really well prepared,” Herd said. “When we get to Carnegie, we’re going to have played this recital three or four times already.”

The show includes pieces by Schubert, Medtner, Jalbert and Stravinsky. Herd said he and Smith tried to pick music that’s a little outside the mainstream — pieces that next week’s performers won’t repeat.

George Abraham, a board member at the Eastman School, is bringing Herd and Smith to Carnegie through his foundation.

“We’ve known him for a long time,” Herd said. “He actually had us over to sight read some pieces, and he really liked what he heard, and he decided to sponsor us.”

Herd’s parents plan to attend the Carnegie Hall show, along with a contingent of local fans.

“There’s been a lot of support,” he said. “It makes it even more meaningful. Obviously it will be a real honor to play on this stage where all the great artists of the world have performed.”

Herd cannot remember the first time he picked up a violin. He started playing at age 4. Like the need to sleep or eat, or the rhythm of the seasons, his instrument has always been there.

“I have little baby pictures of me holding a plastic guitar,” Herd said. “It was just something that was in my blood, I guess.”

Regan’s son took music lessons with Herd. She saw hints of Herd’s future even then.

“It’s always hard to know whether someone can maintain the level of concentration, and I’m sure frustration, that a career like that will bring about,” she said, “but he just was a kid with amazing energy that could be all over the place but was just so focused when he played his violin. His amazing concentration and energy would go right to the instrument.”

Herd says playing the violin is a challenge. He must use his bow in just the right way to get each string to resonate properly and produce a sound that is both beautiful and in line with what a composer intended.

“It’s like an uphill battle every day,” he said.

Herd said he’s always been buoyed by the community’s support. Although he left Geneva after his sophomore year in high school to study music in Ohio, his connection to his hometown never wavered.

“Ever since I was a little kid, there’s been people in this community who really wanted arts, who really loved the arts,” he said. “Because of that, I was able to start doing this.”

In 2011, Herd returned the favor, founding the Geneva Music Festival. Each summer, it brings well-known musicians — like violinist Ani Kavafian, who taught Herd at Yale — to Geneva.

“It’s amazing the level of talent that he brings together,” Regan said. “It’s great to see him focus on the community that he grew up in.”

Herd hopes the festival can continue to grow in the coming years and become a significant tourist attraction for the city.

“This is a perfect place for the arts,” he said.

Back in Houston, Herd spends 12-13 hours a day teaching classes and practicing. He also performs with a group called Vicennium Void. The name — it’s Latin — refers to a 20-year period, and the group emphasizes classical music composed over the past 20 years.

Herd said they want to show audiences that the genre is still flourishing and not the sole province of long-dead European composers.

The group’s schedule includes concerts for and at Covenant House, a Houston homeless shelter. Soon it will take its music much farther afield.

Herd said another member of the group started a program called Resonances of Hope to carry classical music to the world’s remotest places. In June, Vicennium Void will travel to northern Thailand’s tribal areas.

“All these cultures are fading, through the world, so it’s really an honor to be able to get there,” he said.

The trip will be the group’s first under the Resonances of Hope banner. Herd said the group is taking things one step at a time as it raises money, but the musicians hope to travel to Brazil next.

Herd, meanwhile, is trying to wrap up his doctorate and decide what his own future holds. He said breaking into the music business as a performer is “next to impossible,” but he also loves to teach.

As a result, he hopes to become a professor as well as performing. That fits well with the lifestyle he wants.

“If I was just one the road all the time, it wouldn’t be a good lifestyle,” he said. “I want to have a home, too.”

Until then, there is always North Main Street, where last week’s practice sessions merged with childhood memories.

“Geneva has always been a great place for me,” he said.

For more information about Herd and Vicennium Void, visit www.vicenniumvoid.com.

For information on this year’s Geneva Music Festival, visit http://genevamusicfestival.com.

A high-end violin — think Stradivarius — can cost millions, an impossible sum for a young performer like Geoffrey Herd. However, that doesn’t mean the choice of instrument isn’t important.

Herd said his was made by one of the top living violin makers, David Burgess.

It was not Herd’s first instrument. Like a baseball player looking for the perfect bat or an artist in search of the best brush, he had to experiment.

“I had been searching for years,” Herd said. “We had actually bought an old French violin from the 1840s, spent a lot of money on it. Then, I decided I didn’t like it.”

Herd has had the Burgess violin for eight or nine years.

“It’s got a big, warm sound, and it projects nicely in a hall,” he said.