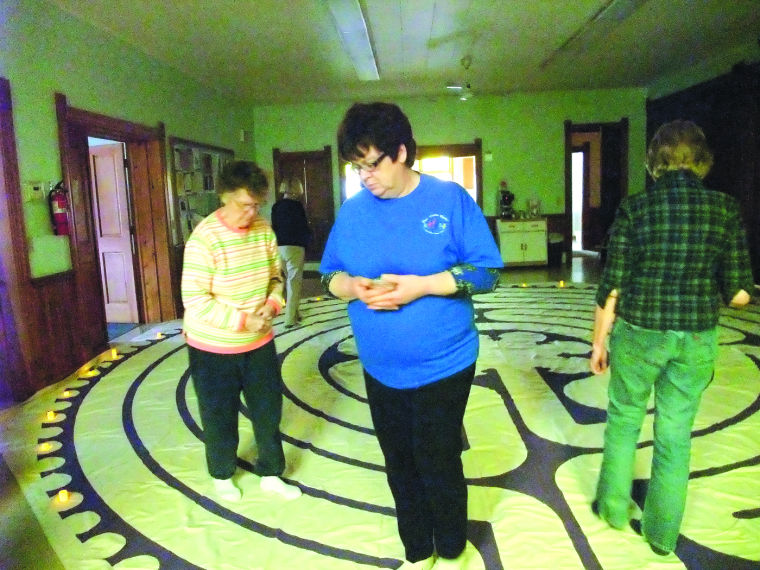 Karen Hadley (center) and Robyn Ballard (back to camera) walk the labyrinth recently. The woman at left is unidentified. 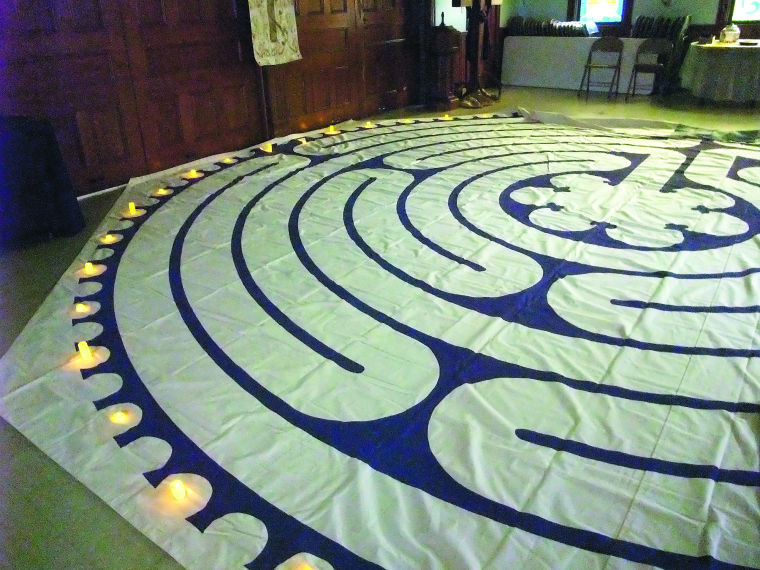 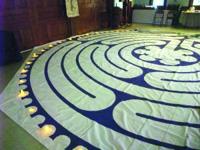 This portable, hand-painted labyrinth was purchased in March by the Healthy Behaviors workgroup of the Our Town RoCKS group (also known as the Barrington, Starkey and Dundee Health Improvement Project).

Karen Hadley (center) and Robyn Ballard (back to camera) walk the labyrinth recently. The woman at left is unidentified.

This portable, hand-painted labyrinth was purchased in March by the Healthy Behaviors workgroup of the Our Town RoCKS group (also known as the Barrington, Starkey and Dundee Health Improvement Project).

DUNDEE — After interviewing Dee Anderson, Karen Hadley and Robyn Ballard about their labyrinth project, they invited me to walk it.

I took off my sandals, stepped on the “centering” rug at the labyrinth’s entrance and put one foot in front of the other.

The large canvas labyrinth, 24 feet in diameter, was laid across the floor and encircled by flickering flameless candles. A labyrinth is not a maze — there are no choices to be made. You simply follow the path to the center at your own pace, then retrace your steps out to exit it.

Walking a labyrinth is a personal experience, but I cheated — raising my head and looking around. I was surprised to see Hadley had the same posture as me ... heads down as we concentrated on our paths, hands clasped behind our backs. Although we each were entertaining our own thoughts, our bodies had adopted similar poses as we walked.

This portable, hand-painted labyrinth that I walked was purchased in March by the Healthy Behaviors workgroup of the Our Town RoCKS group (also known as the Barrington, Starkey and Dundee Health Improvement Project).

The group received a grant from the Presbytery of Geneva to undertake a larger, more permanent labyrinth project — an herb garden in the shape of a labyrinth at the Seneca Street park. But Anderson, coordinator of the Our Town RoCKS and Reads program, said they decided to first buy the portable labyrinth to familiarize people with what one is.

“We really want to get it out in the community so they understand what a labyrinth is and they can learn its benefits,” she said.

In its grant application, the group noted that offering labyrinth walking experiences can help to increase physical activity, reduce stress and support spiritual growth. It can also promote special connections across economic, social and age differences.

Anderson said labyrinths employ a unicursal path with one entrance that also serves as the exit point. There are no right or wrong turns to be made.

“The only choice you have to make in a labyrinth is whether you want to walk it,” she said.

The portable labyrinth’s pattern is a smaller version of that found in the stonework floor at Chartres Cathedral in France. It was hand painted (in a deep purple color) by Lisa Gidlow Moriarty of Paths of Peace in Minnesota.

Local facilitators have been trained and are available to share the labyrinth with community groups. There is no fee to use it.

The group borrowed another portable labyrinth late last year as facilitators were trained in its use. They brought it to several places, including the American Legion for Veterans Day and the Dundee Youth Center right before Christmas.

For the Legion event, schoolchildren had folded peace cranes for participants to carry and leave at the labyrinth’s center.

“It was really moving,” Anderson said. “We had a couple of soldiers who recently served walk the labyrinth together and stand in the center and contemplate what they had gone through.”

The Legion requested that the labyrinth return for the holiday tree-lighting ceremony and Anderson said more people walked it during that second visit.

At the youth center, Anderson was struck by how the children who were “off the wall” before Christmas calmed right down once they experienced the labyrinth.

“Their whole demeanor changed,” she said. “They walked it very respectfully. It was wonderful.”

There is an etiquette associated with walking a labyrinth. Quiet is paramount, although Anderson often has soothing music playing in the background. People proceed at their own pace and if you meet someone on the path, it’s expected one person steps aside and lets the other pass. People walk the labyrinth at different paces, which is fine.

As the labyrinth is shared with different community groups, Hadley’s hope is that it helps people who might be struggling — whether it be a bad day, week or year — find inner peace.

Ballard, co-chair of the Our Town RoCKS steering committee, says it can provide an alternate way of dealing with problems.

“Sometimes we are so aggressive; this is just a calming effect,” she said.

Indeed, Anderson said labyrinths can be used in conflict resolution, with people walking it together.

The organizers have not abandoned their dream for a permanent garden labyrinth and see the portable one as a step in readying people for what’s to come. They still have grant funds left for that project, but will have to supplement them by fundraising, Anderson said.

Although the goal is to promote healthy behaviors among local residents, she sees another use as well. Anderson noted that with the wine trails and area bed and breakfasts, walking a garden labyrinth could be another thing for tourists to do. In fact, there is a national registry that labyrinth lovers consult.

“It could very well be a destination,” she said.