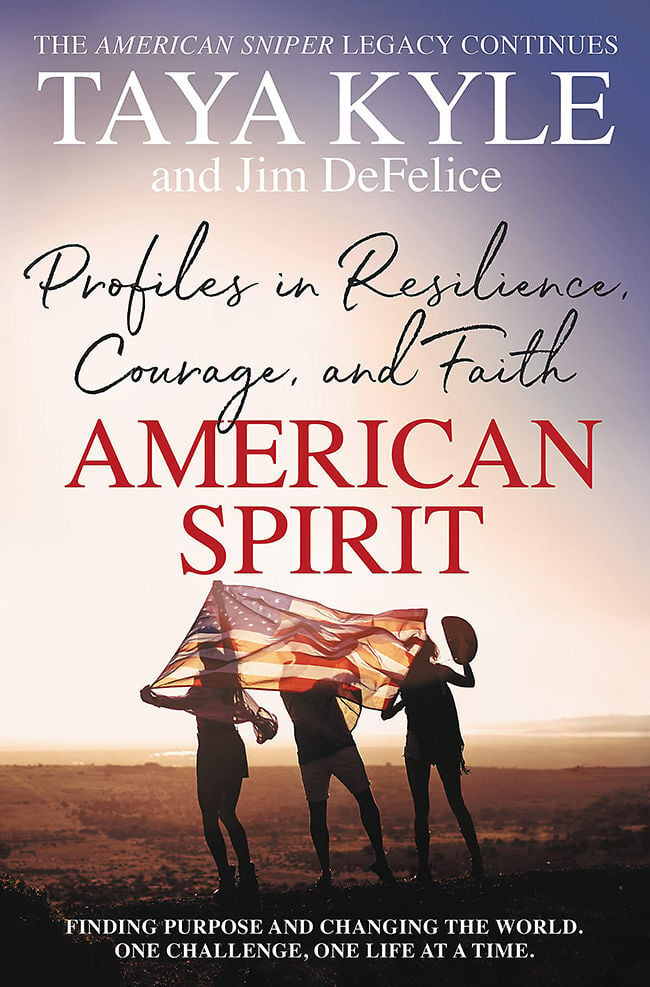 Have you ever had something awful happen in your life that put you on a pathway you didn’t want to be on, and then discovered this bad pathway led to a much better pathway you might not have ever discovered if you had not initially experienced something really terrible?

“American Spirit” is a beautifully written account of how 36 Americans — including Taya Kyle, who experienced profound despair after her beloved husband, “American Sniper” Chris Kyle, was killed by an emotionally disturbed man he was trying to help — triumphed over despair on a new life pathway that included doing extraordinary things for others.

Lt. Col. Brian Birdwell, a 9/11 survivor who was burned badly, over most of his body, wondered, what debt do I owe to God? And to my fellow human beings? What am I supposed to do with this miracle of survival?

Birdwell was working at the Pentagon when the terrorists attacked it. His doctors believed initially Birdwell had less than a 1% chance of survival.

After a recovery that may well have been miraculous, Birdwell and his wife teamed up with a writer to produce a book, “Refined by Fire: A Family’s Triumph of Love and Faith,” and founded Face The Fire, a special ministry that assisted burn survivors and their families. Money from the book and honorariums from speaking engagements were donated to the ministry. These donations then were given to burn victims and their families to cover incidental expenses such as lodging during treatment. Face The Fire also contributed to burn centers and other organizations before the charity wound down in 2017.

More than $400,000 was distributed to help burn victims and their families.

In 2010, Birdwell began his first term representing Texas’ 22nd District as a state senator. He continued to tell his story of survival and recovery. Birdwell: “If we didn’t tell the story, and give the Lord the honor, we would be derelict.” There were “too many things, too many miracles, too many people in the right places at the right time, too many circumstances that came together” that all indicated Higher Powers had been at work.

While the majority of stories in “American Spirit” are about overcoming horrific tragedies, people need not experience them in order to make major, positive changes in their lives.

In this regard, the authors tell us how Caressa and Marlee, two 10-year-old girls living in a small Texas town, came to the realization that life shouldn’t revolve around playing with dolls. The two friends wanted to gather socks and give them to residents of the town’s two nursing homes. After sharing their idea with their families, peers, teachers, businesspeople, pastors, and church congregations, before long the entire town was in on the project. People donated socks — Marlee’s aunt even sent some from Germany — or money to purchase them.

On Valentine’s Day, the girls filled a small wagon and distributed socks to the nursing home residents. Some people also donated blankets that the girls handed out to residents who couldn’t use the socks.

“It was great seeing the smiles on their faces,” Caressa said.

Kyle explains: “What I love most about the idea isn’t just that it was thought up by a pair of 10-year-olds — although that in itself is special. It’s that a really simple idea rippled big in the community, brightening days and encouraging others to be generous. A search for something better than playing with Barbies and, dare I say, cell phone entertainment, turned into a way to show people that they’re not forgotten, which morphed into a town-wide phenomenon — and in the process, reminds us all of what’s important.”

These and the many other stories in the book call to mind the words of Dr. Albert Schweitzer: “You must give some time to your fellow man. Even if it’s a little thing, do something for those who have need of help, something for which you get no pay but the privilege of doing it. Remember, you don’t live in a world all your own. Your brothers and sisters are here too” (Schweitzer also said that “Until he extends the circle of his compassion to all living beings, man will not himself find peace”). For those who have experienced major trauma, tragedy or setbacks, all the more reason to take Schweitzer’s words to heart — and to read the stories in “American Spirit.”

As I read “American Spirit,” I also thought about my favorite story in the Old Testament. Joseph (Genesis 37-50) was betrayed and sold into slavery by his brothers. He was later imprisoned in Egypt after being falsely accused of sexual assault. But lo and behold, all this turned out to be a prerequisite for the Pharoah appointing Joseph as governor of all Egypt, who prevented starvation for Egypt and for Joseph’s family.

If you are moved by the stories of Birdwell’s recovery and the children’s socks and blankets distribution project, you will also likely be similarly inspired, as I was, by the other stories in “American Spirit.” And, as the authors remind us, “The American Spirit is present in each of us, waiting to be expressed and shared.”