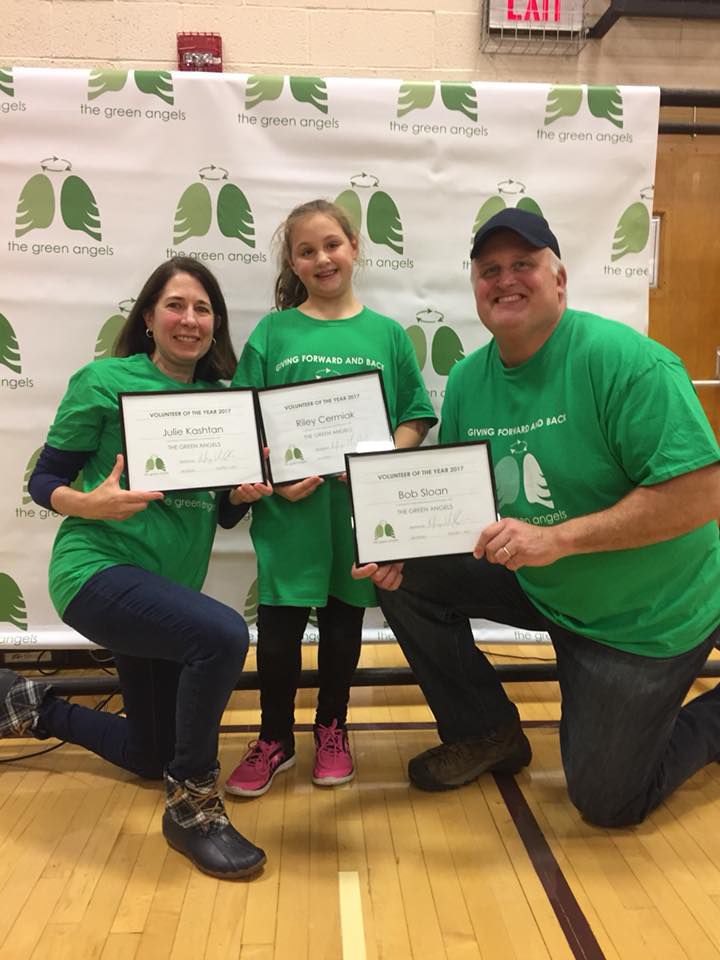 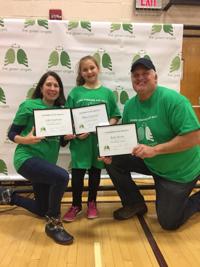 These three were named Green Angels “2017 Volunteers of the Year.” They are (from left) Julie Kashtan from Brighton Your Wardrobe; Rieley Cermak of Lyons and Bob Sloan from Howard Hanna Real Estate Services.

Volunteers stand outside the Green Angels van after loading up some items for the December Holiday Free-cycle held at the Lyons Central School District. Below are Green Angels founders Bill Doyle (left) and Marya Vande-Doyle. 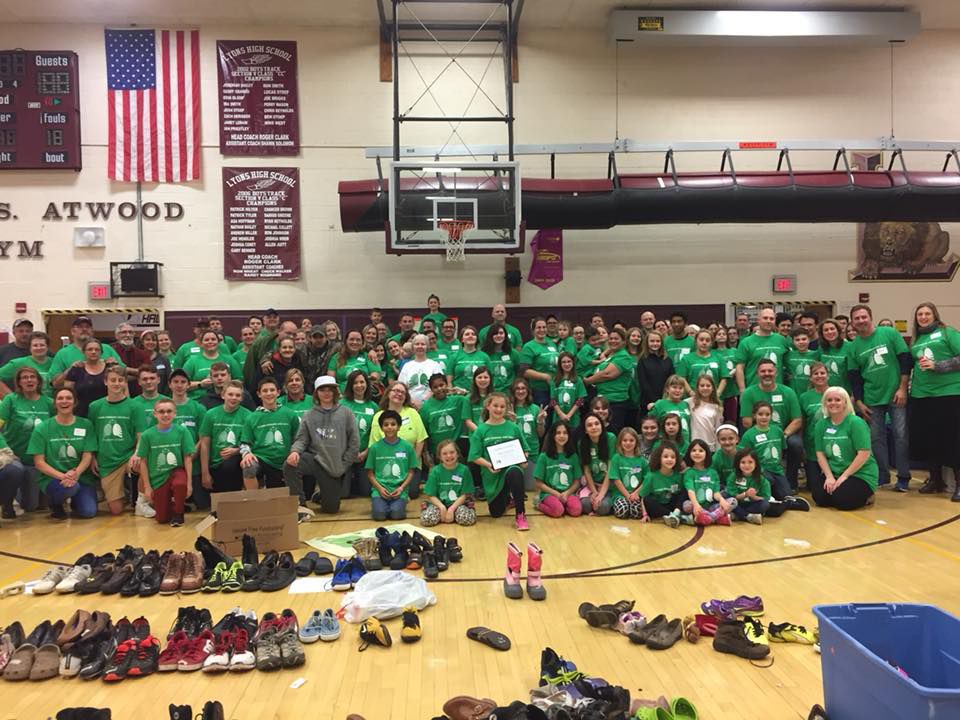 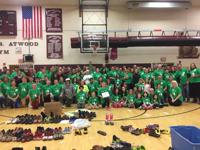 Volunteers gather in the Lyons school district gymnasium during the Green Angels’ December 2017 Holiday Free-cycle, where families can come and pick up clothing, toys and household items free of charge. 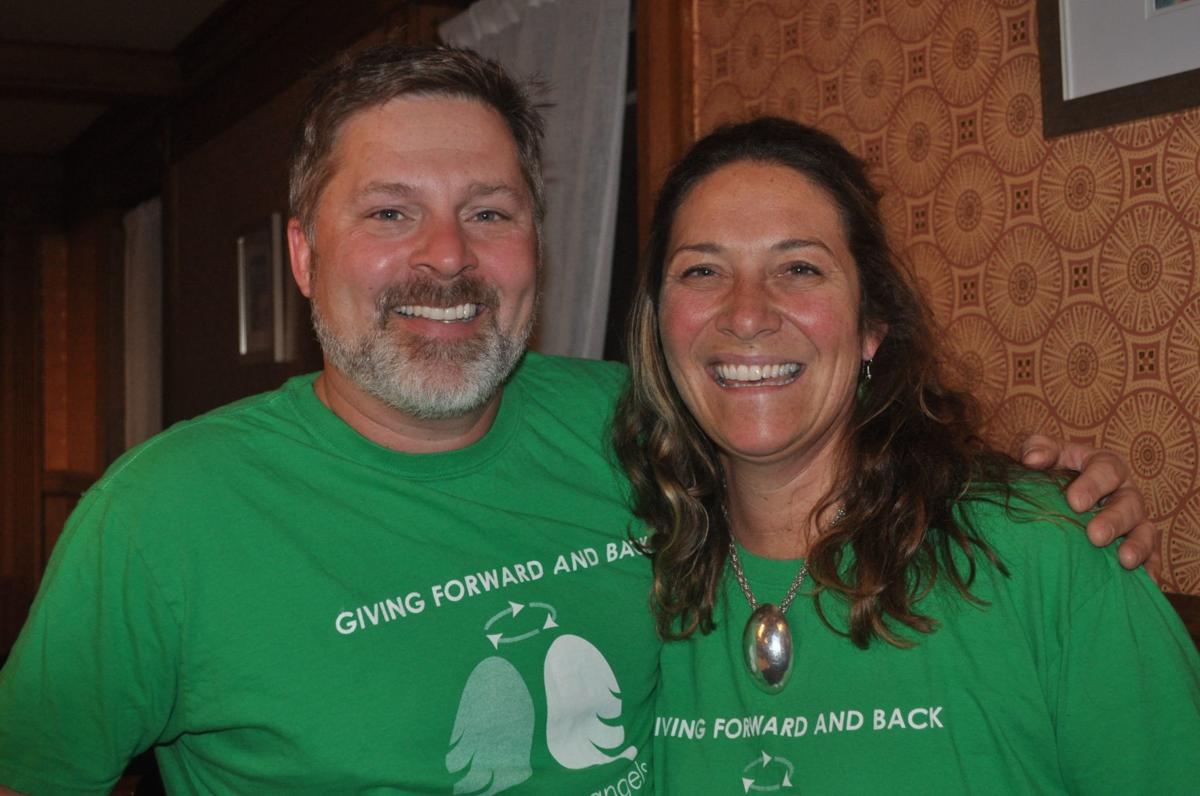 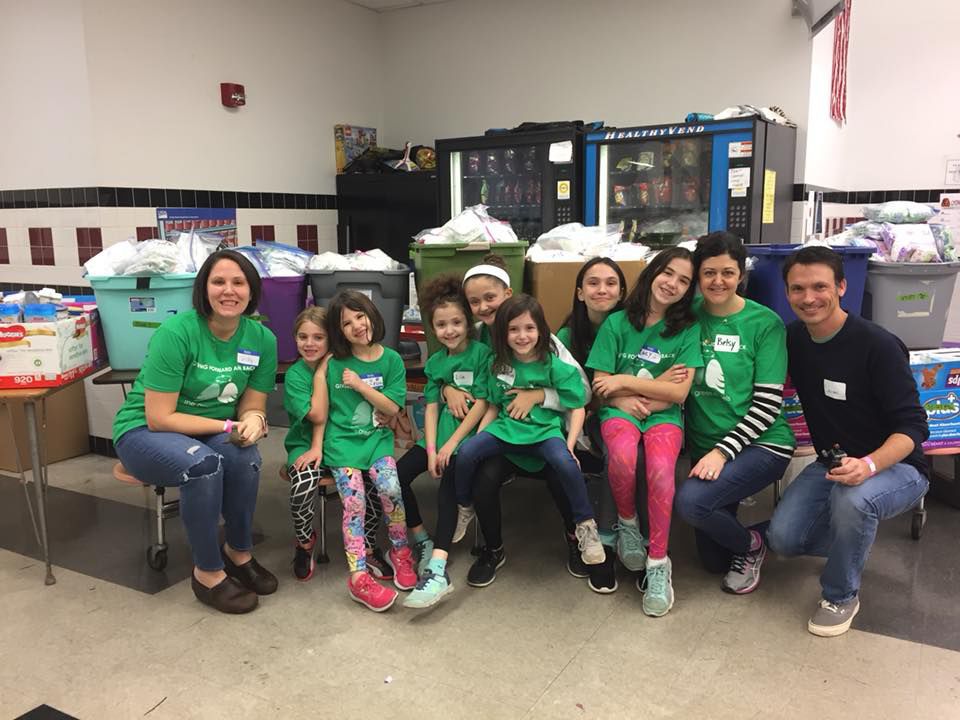 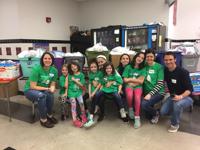 Family members and volunteers take a break from organizing donated items for a photo at the Green Angels’ December Holiday Free-Cycle held in Lyons.

These three were named Green Angels “2017 Volunteers of the Year.” They are (from left) Julie Kashtan from Brighton Your Wardrobe; Rieley Cermak of Lyons and Bob Sloan from Howard Hanna Real Estate Services.

Volunteers stand outside the Green Angels van after loading up some items for the December Holiday Free-cycle held at the Lyons Central School District. Below are Green Angels founders Bill Doyle (left) and Marya Vande-Doyle.

Volunteers gather in the Lyons school district gymnasium during the Green Angels’ December 2017 Holiday Free-cycle, where families can come and pick up clothing, toys and household items free of charge.

Family members and volunteers take a break from organizing donated items for a photo at the Green Angels’ December Holiday Free-Cycle held in Lyons.

PALMYRA — In 10 years, the simple idea to just “share things forward” from their family to another has morphed into a volunteer service organization of Herculean proportions.

Bill Doyle and his wife, Marya Vande-Doyle, recently sat down and reflected on the journey the Green Angels has taken since they first had that desire to give some of their children’s toys to a speech therapist who worked with their son.

That therapist, Annaliese Parker, mentioned one day in passing how she frequented garage sales to purchase books and toys for some of her clients whose families struggled financially.

“We just couldn’t believe it. What do you mean?,” Vande-Doyle recalled saying.

So she and her husband promised Parker that the next time she came they would have bags of anything she needed.

With two young boys at home, the Doyles found themselves with a copious amount of toys and books. And their friends were in a similar stage of life, with stuff piling up as their children outgrew things faster than they could clean out. The Doyles kicked around the idea of replicating their small donations on a much larger scale and came up with a business plan to do just that.

After Bill Doyle got a bonus, they decided that instead of banking it they would use it to form a non-profit and “… to do something good with it and push it forward.”

Thus, the Green Angels were born.

Family and friends started collecting items and the group’s first Holiday Free-Cycle was planned at the Palmyra Community Center. The Doyles took out a $5 ad in a local newspaper and crossed their fingers people would come.

About 50 families showed, but the following week the couple started receiving phone call after phone call from people who had missed the event but wondered if items were still available.

“We started getting the stories,” said Vande-Doyle, like the one from a woman who was about to give birth but had no job, crib or diapers.

Initially, the Doyles had conceived of annual giveaways, a “one and done” until the next year.

But after being assaulted by the poverty in their own backyard, they realized the need existed year round. Vande-Doyle was a stay-at-home mother at the time so she started using their home as a drop-off point and would deliver the donations herself, the kids strapped in car seats. Doing so connected her with those the organization was serving — and reinforced the couple’s commitment.

“These are real people with real needs and they are just like the rest of us,” Vande-Doyle said, as her husband added: “‘Don’t judge a book by its cover’ took on a whole new meaning.”

The organization spread by word of mouth, in part because it operates simply. There is no selection process, no application to fill out, no requirement to provide proof of income.

“If somebody finds the Green Angels they need help,” Doyle said. “There’s no sense in screening.”

(The organization does, however, require clients to sign a liability waiver).

In 2010 the group benefited greatly from a connection with the Ad Council of Rochester (now Causewave Community Partners), which assessed the Green Angels’ mission and operations and devised a business plan and communications and branding strategy for them.

“It literally changed us entirely,” said Doyle. “They prescribed a plan for us, which we’ve tried to stick to. It’s served us well.”

Today, the Green Angels has hundreds of volunteers and a seven-member board. Schools, Scouting groups, book clubs, church groups and the like hold their own donation drives. The Green Angels deliver items year-round and generally see the greatest need in early January and right before school starts. Sometimes in June there is a jump in food requests, since children will no longer be in school. The group receives daily referrals from such organizations as the Wayne Behavioral Health Network, Wayne County Public Health, Newark-Wayne Community Hospital, Victim Resource Center, Wayne County Rural Health Network and Wayne County school districts and now serves more than 1,000 children annually.

Hunting for a home

Items are housed in storage units in Rochester and Palmyra and the Wayne-Finger Lakes BOCES has donated space at its Williamson site where students help sort, label, box and store clothing.

The group had recently hoped to purchase the vacant St. Anne’s School in Palmyra to consolidate its operations, but that project fell through. They are still interested in acquiring a Wayne County site where all items can be stored in one place and in a more organized fashion than is possible with storage units, where boxes are piled floor to ceiling. The group also envisions “a center of giving,” where volunteers can gather. The Green Angels has received grant support from several organizations, including the Bullis Fund of the Rochester Area Community Foundation and the Saunders Foundation — and because of that support is able to consider buying a building for its headquarters.

Two, part-time contractors now do the work on a much larger scale than the Doyles used to do. One serves as the point of communication, coordinating and scheduling the donations and deliveries. The other is a former client who makes the deliveries in a van that was purchased thanks to a Bullis Fund grant.

Financial donations are accepted on the group’s website (http://the-green-angels.com/) and that money is primarily used for gas, diapers and back to school supplies.

“We don’t want to be the type of organization that collects money and stuffs it in a bank account,” Vande-Doyle said. “We raise what we need and only ask when we need it.”

Emilie Sisson, director of the Wayne County Rural Health Network, said what the Green Angels do touches on needs throughout Wayne County. She described the group as “grass roots started and grass roots supported” and said it is very good at working collaboratively with other Wayne County agencies.

A case in point is the Wayne County Services directory the two worked on together and launched in 2009.

“We had the same idea at the same time,” said Sisson of the directory (www.wayneresourceguide.org/), which is a consolidated listing of Wayne County resources and services. “At the time there was a lot of debate whether it should be printed or online. Our stance was it should be both.”

Sisson said by working together her agency and the Green Angels were able to leverage grant funds and create the directory. She continues to work with Vande-Doyle to update it. Wayne County Rural Health Network also attends the annual Holiday Free-Cycle to share information with those attending.

Ten years is a ripe time for burnout, but the Doyles remain as committed to the Green Angels as the day they conceived of it. They have been bowled over by the desire of others to help, especially children. Eagle Scouts have coordinated book drives that have netted 10,000 books and 600 coats; youngsters save their pennies and donate $32.18 in change. They see the group’s mission as also providing an outlet for people to do good deeds.

“People count on us for stuff, but also for teaching and empowering their kids about giving forward and giving back,” Doyle said.

Want to be a Green Angel?

Host a corporate giving week in your office

Volunteer at our “Free-Cycle” program

Financially sponsor a family/child who needs items such as school supplies, backpacks, diapers, formula and mattresses

Donate gently used items from your family. The following are current high-need items: