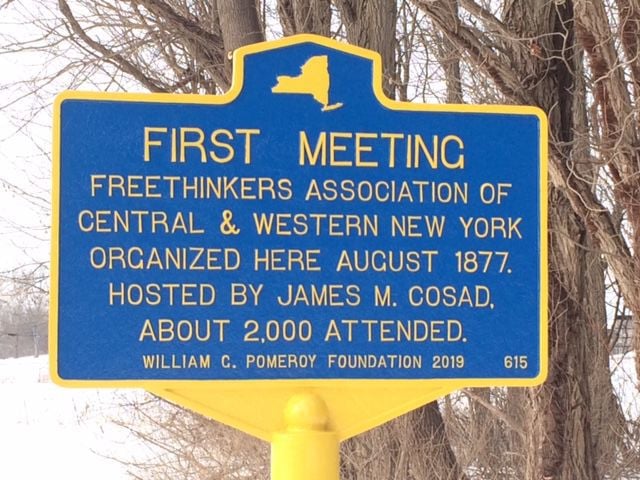 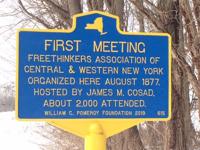 This recently installed historic marker in Huron commemorates an 1877 meeting of the Freethinkers Association that attracted 2,000 people. 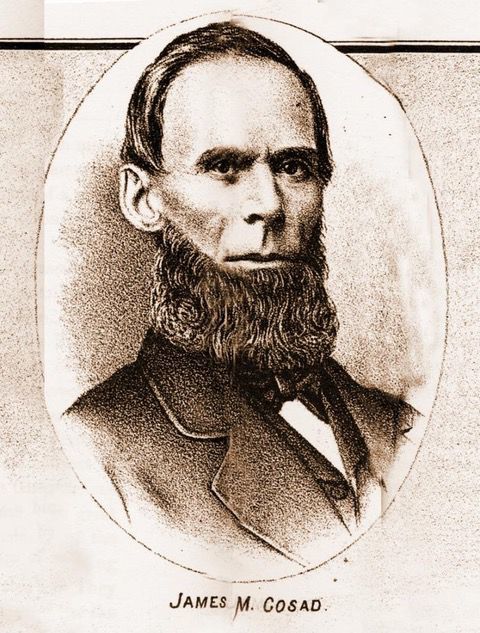 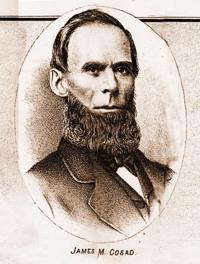 This recently installed historic marker in Huron commemorates an 1877 meeting of the Freethinkers Association that attracted 2,000 people.

The Gorall home was originally built by James Madison Cosad in 1876 as a meeting hall, known at the time as Liberal Hall or Cosad’s Hall (not to be confused with the historic Town Hall on North Huron Road). An assortment of guest orators passed through its doors speaking on topics such as abolition, women’s suffrage, political reform and spirituality. Cosad built Liberal Hall across the road from his home, now the residence of June MacDougall and her son David. Both Cosad’s home and Liberal Hall were originally two-storied buildings. The second story of both structures was removed — the home by deconstruction in the 1950s and Liberal Hall by fire in the 1960s.

James Madison Cosad came to Huron in 1856 from Junius, Seneca County. Cosad first bought property near East Bay, at what is now Chimney Bluffs State Park. He cleared and actively farmed that land. In 1858, Cosad purchased land a little farther south at Mudge Creek on Lummisville Road, also known as Rice’s Mill. He retained the property at East Bay, expanding his farming activities. Cosad owned more acreage than most Huron residents at that time.

The Town of Huron’s W. G. Pomeroy historic marker commemorates the first meeting of the Freethinkers Association of Central and Western New York, held from Aug. 17 to 19, 1877. Newspaper articles reported that about 2,000 people from New York state, Canada and the New England states attended the three-day meeting in the grove behind Liberal Hall. Freethinkers were a social, intellectual and political reform group of the late 19th century whose followers questioned religion, supported the freedom and rights of slaves, fought for women’s rights (including the right to vote) and advocated for the separation of religion and government. Important Freethinker reformists were women’s rights activists Elizabeth Cady Stanton, Susan B. Anthony and Amy Post; agnostic political lecturer Robert Green Ingersoll; writer Mark Twain; and abolitionist Frederick Douglass.

Many thanks to Gerrit Reyn and the Town of Huron Highway Department for careful trimming of trees along the roadside and for installing the historic marker. A note of appreciation to Ruth and Jim Chatfield of Wolcott, who originally shared the historic tale and continue to share research about this remarkable character, James Madison Cosad. Sincerest appreciation to Cheryl Gorall and her family for their willingness to host this important historic marker.

A dedication program to honor James Madison Cosad and to celebrate this new addition to Huron historic sites will be held in the spring. If you wish to learn more about Cosad, the Freethinkers and the rich history of the town of Huron, please visit www.historichuron.org and search for Cosad. More information on the William G. Pomeroy Foundation may be found at www.wgpfoundation.org.