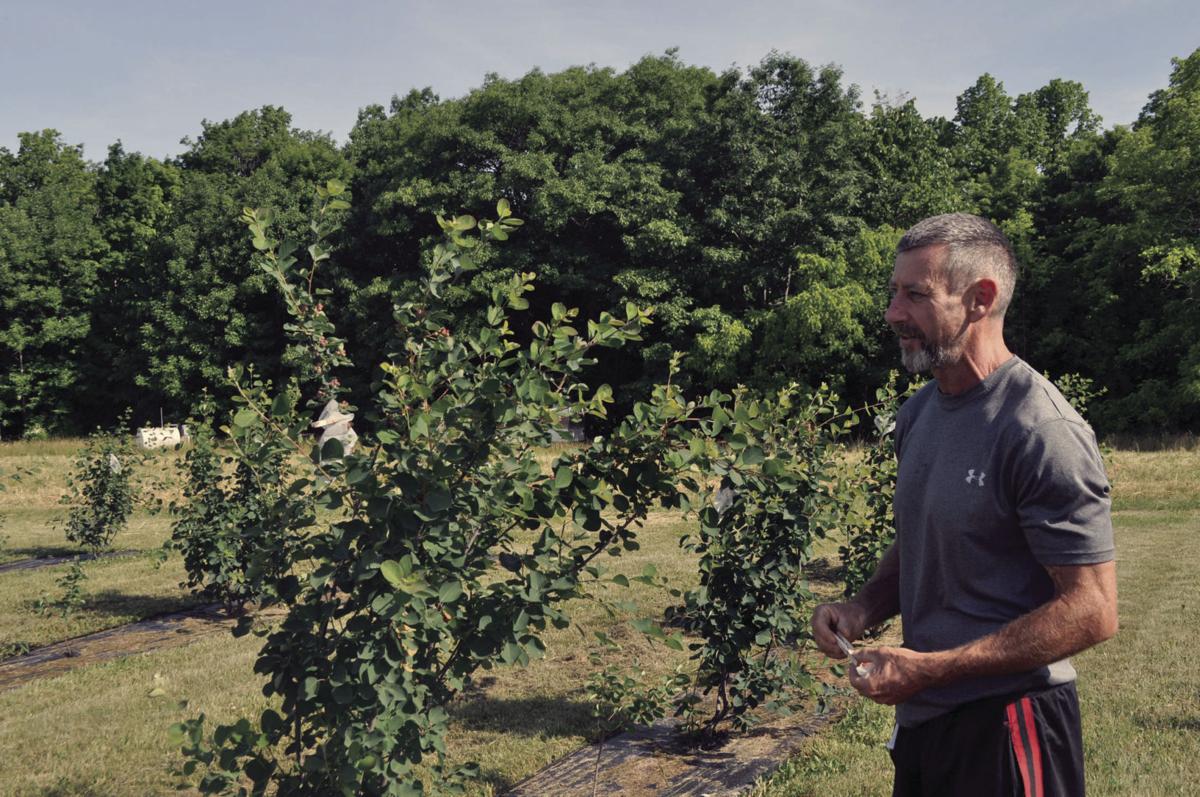 Guy Lister of Willard stands by some of his mature juneberry bushes. Lister is cultivating about 6,000 bushes; some of their ripening fruit is pictured below. Juneberries look like blueberries but are not as juicy, generally sweeter and are higher in nutritional value. 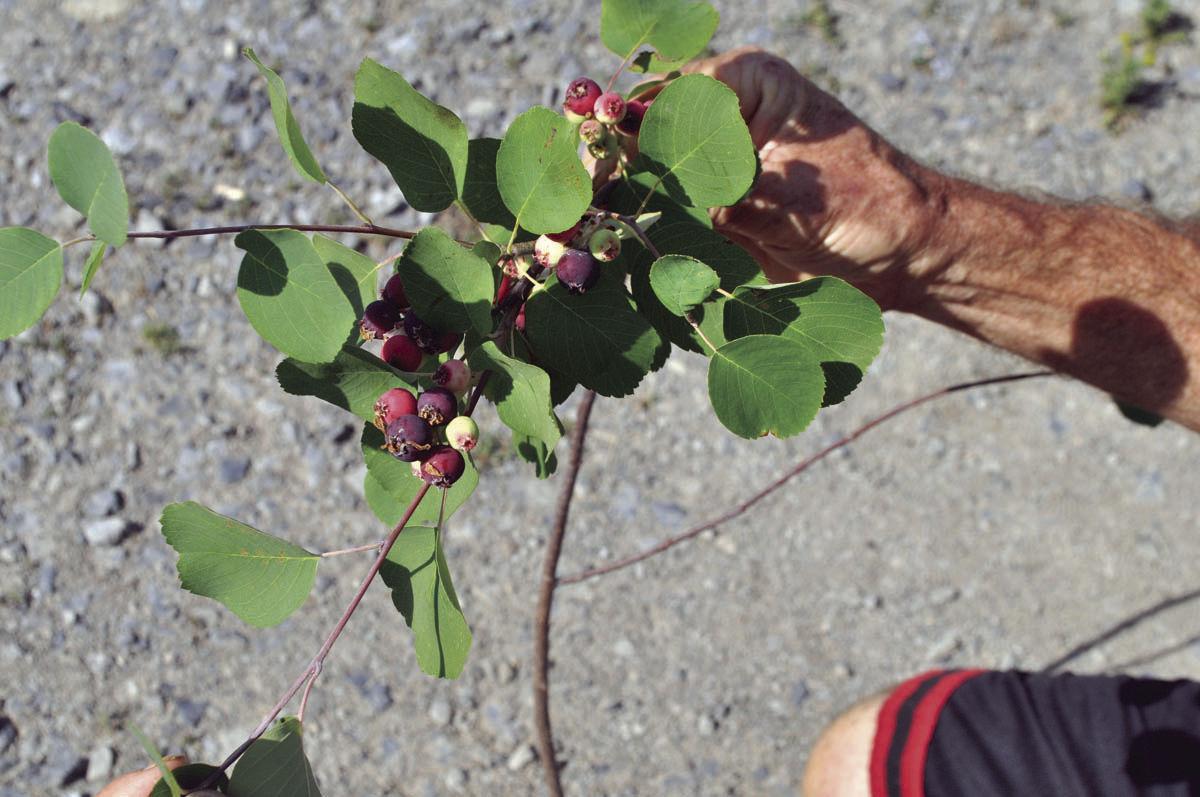 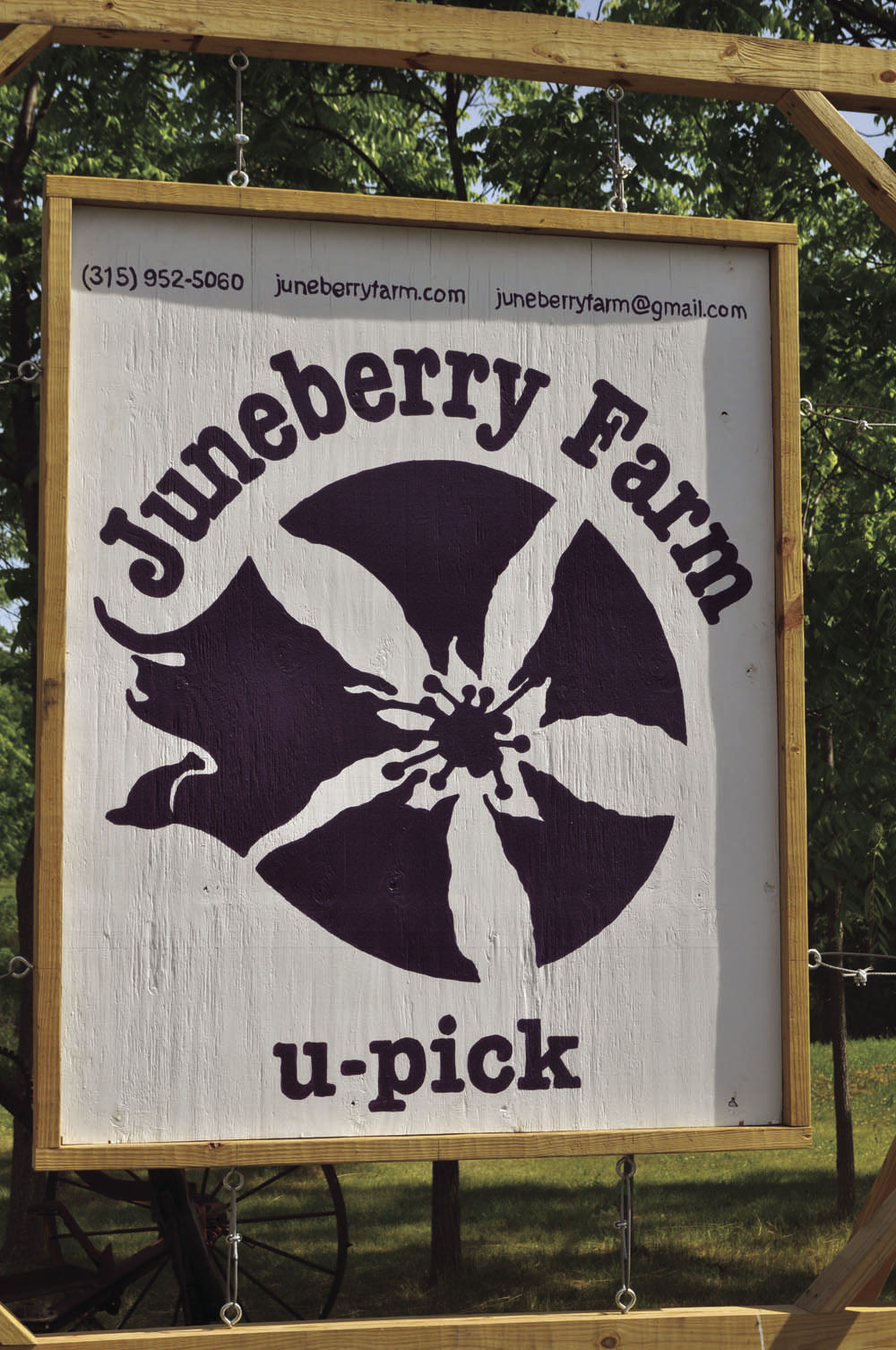 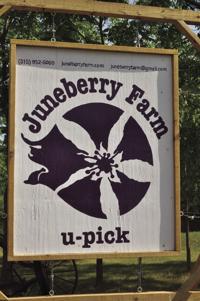 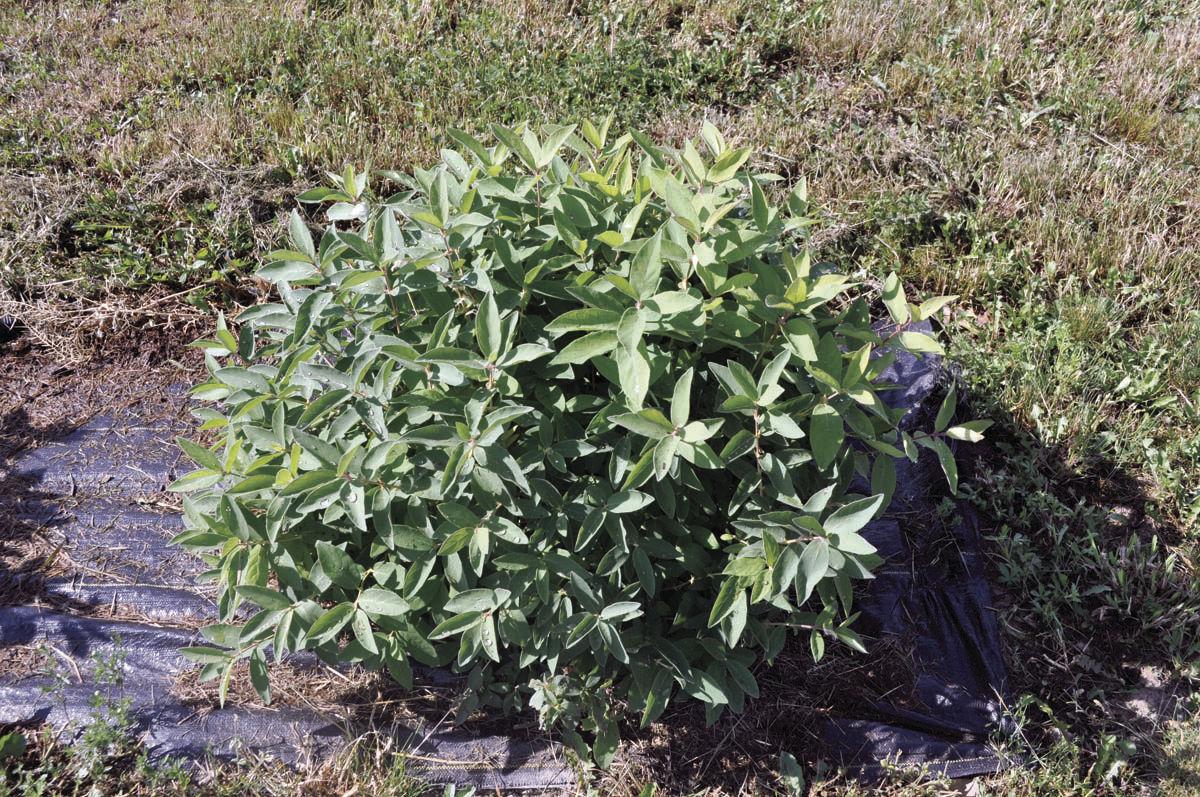 Among the other exotic U-pick berries Guy Lister has at Juneberry Farm are honeyberries.

Guy Lister of Willard stands by some of his mature juneberry bushes. Lister is cultivating about 6,000 bushes; some of their ripening fruit is pictured below. Juneberries look like blueberries but are not as juicy, generally sweeter and are higher in nutritional value.

Among the other exotic U-pick berries Guy Lister has at Juneberry Farm are honeyberries.

Lister runs Juneberry Farm at the end of First Street in this Seneca County hamlet. Juneberries — for the unfamiliar — are similar in shape and color to blueberries, but that’s where the commonalties end. Juneberries are not as juicy as blueberries, tend to be sweeter and have a very high nutritional value.

“They really are a superfruit,” said Lister, who described them as looking like a blueberry but with a sweeter, almost black cherryish flavor.

Lister, a native of England, purchased his land in 2009. He is a one-man operation who is following his passion by trading in a desk-bound career he barely tolerated for farming unusual fruits.

“I wanted to grow something that was different and unique and was good for you,” Lister said.

After perusing the Internet (and the University of Saskatchewan website in particular), he landed on juneberries because they fit his criteria of easy to grow in our upstate New York climate and possessing a high nutritional value.

Jim Ochterski, an independent juneberry consultant, said he’s impressed with the way Lister has moved ahead by progressively planting a lot of bushes. Ochterski said Lister’s farm is the largest U-Pick juneberry orchard in the Northeast (the next largest one is G&S Orchards in Walworth).

Ochterski said he is fielding more inquiries about juneberries, including one from a juice maker in Canada who is interested in adding juneberry concentrate to beverages.

“If people go to Guy Lister’s farm they’ll have the experience of juneberries in their best form, which is fresh right off the bush,” he said. “For people who haven’t tried juneberries before this would be a really great opportunity to go ahead and pick them themselves ... and they’ll have the chance to at least taste them and judge them for themselves. But I’m willing to bet they’ll be impressed.”

According to Ochterski, juneberries have several attractive qualities, including:

• They freeze well because of their firm quality.

• Are not “fickle” about soil.

• Juneberries have a superior iron content (about 23 percent of the recommended daily allowance) and high levels of what’s known as phenolic compounds.

• They have similar vitamin levels as blueberries and provide healthy amounts of potassium, magnesium and phosphorous.

Ochterski has been instrumental in encouraging juneberry production locally (Canada is the fruit’s leading commercial producer). Lister called him “a tremendous resource who is infinitely knowledgeable and very available.”

He also has several fig trees — a few of which were gifted to him years ago by his Italian landlord.

Lister finds himself on the cusp of bountiful production when it comes to his juneberries, which take four years to fruit. It took him a year to clear and prepare his tillable acreage, which had been abandoned for 30 years. He planted his first juneberry bushes in 2011 — 30 Martins (a type of variety) and 30 JB30s (another variety). Each year he has added more, experimented with different varieties and is a big fan of Thiessens.

“Once you’ve tasted a Thiessen ... they’re sweet and tangy. They keep the mouth very busy,” he said.

His farm includes an experimental plot where Lister tests those different varieties for both taste and cultivation. And though he runs the farm himself, he does communicate with other juneberry growers far and wide and enlists taste testers.

“I like other people to taste,” Lister said. “I take their reactions very seriously. That’s important to me, what other people think.”

Presently, he has about 6,000 juneberry bushes planted on 8 acres. Just recently he was on his hands and knees planting 2,000 bush seedlings he ordered from a Saskatoon nursery.

“They look minuscule right now but they’ll be fine,” Lister said, as he cradled a newly planted bush and talked about the labor of love that’s inherent in his work.

“I feel like I have a relationship with these plants; I planted them all.”

Lister doesn’t use sprays, instead relying on dryer sheets in the bushes and Irish spring soap to keep deer away and scare balloons for birds. He hand weeds every bush in the field, calling weeds his biggest enemy because they rob the growing bushes of nutrients and light.

But the life of a fruit farmer is a tenuous one. On a recent trip through his fields, Lister pointed out juneberry bushes where deer had eaten the tops clean off emerging berries on his oldest and best bushes. And this upside down mild winter and cold spring really affected some honeyberry and currant bushes, which were in full bloom. He talks of nights when he can’t sleep, worried about the deer helping themselves to the fruit on his precious bushes.

“I’ve put a lot of myself into here,” Lister said, gesturing toward the rows and rows of juneberry bushes on his property. “To have a bird or deer eat them is upsetting, shall you say.”

Lister says he’s still at the relative beginning of his journey, trying to establish his bushes and understand how to keep them alive and producing. But he doesn’t seem to have any regrets — plodding along, adding more plants, learning more. Last year, he offered U-Pick and said people came from as far as Buffalo and Rochester.

“It was great; I got totally picked out,” he said.

Lister’s original vision centered on offering U-Pick services because he believes there’s a trend away toward understanding and appreciating where our food comes from — especially among children.

Lister loves watching a youngster put a juneberry in his mouth for the first time — and liking what he tastes.

“I think I might have created a fruit eater for life and that’s really cool,” he said.

“I’m just following a dream. I don’t know where it’s going to go but I only live once.”

To check on U-pick availability or to learn more about Juneberry Farm, visit www.juneberryfarm.com or www.facebook.com/juneberry.farm.

The changing color of leaves, refreshing temperatures and many other things are touted as great things about autumn. What do you dislike the most about the fall season?