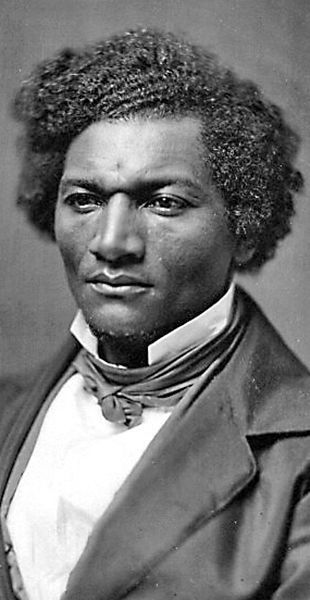 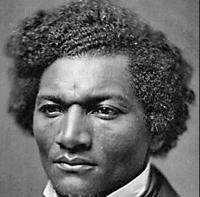 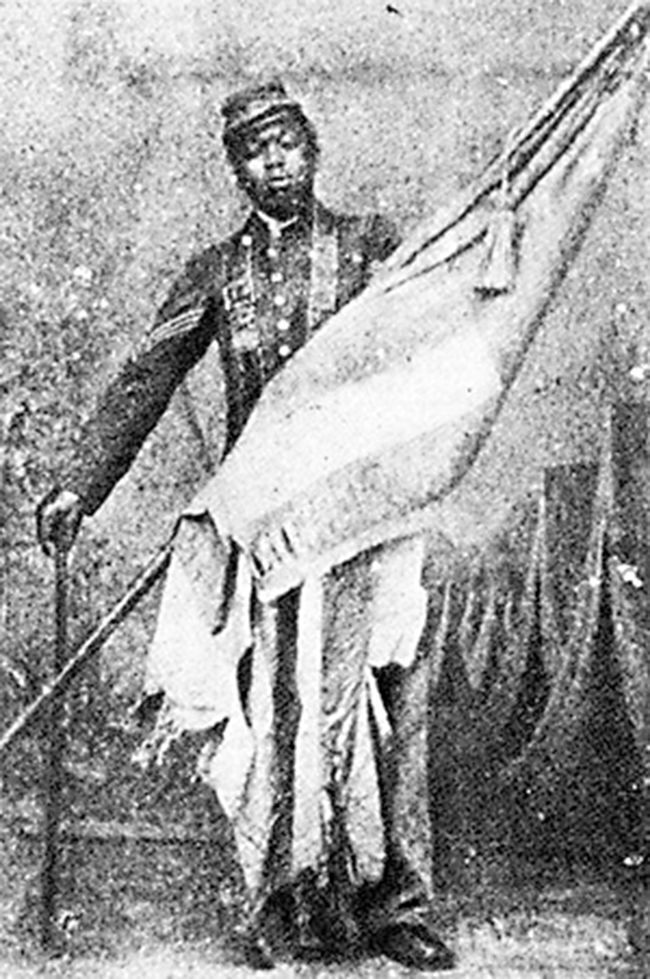 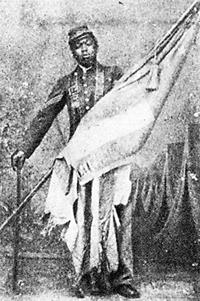 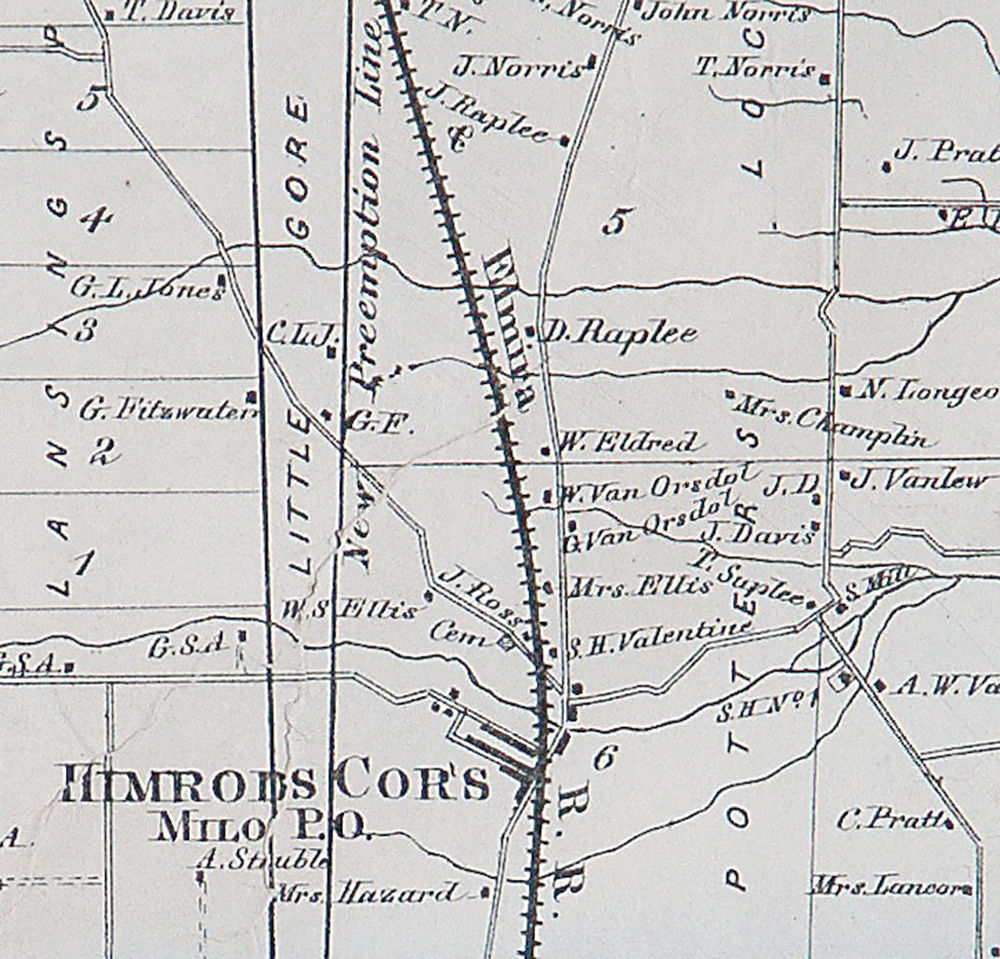 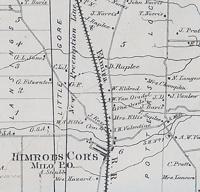 On a hot summer day early in the Civil War, the population of tiny Himrod swelled as people descended on the hamlet from every direction. More than 2,000 people, more than twice today’s population, showed up to hear a speech by Frederick Douglass, who had chosen what was then known as Himrod’s Corners as a venue.

It is not known how Douglass ended up in Himrod, although he was well acquainted with Yates County. He had spoken twice in Penn Yan, and was a friend of Dr. Wynans Bush of Branchport, occasionally visiting his home there with fellow abolitionist and escaped slave Jermain Loguen. Himrod at the time had a train station for the Elmira Railroad, and thousands descended on the little community from the train and dusty roads. Douglass walked to a shady, wooded area outdoors and addressed the crowd.

Born as Frederick Bailey into slavery in Maryland in 1817, Douglass took an incredible, difficult journey before ending up that day in Himrod. As a child he worked on a rural plantation, then was sent into urban slavery in a Baltimore household. At 16, Douglass was sent to Edward Covey, known as a “slave breaker,” a man hired to cruelly abuse enslaved people into compliance. Douglass took many beatings from Covey before physically defending himself, realizing Covey’s reputation as a “slave breaker” would suffer if it were known he had been bested by Douglass. He secretly learned to read.

Douglass escaped in 1838, winding up in New York City. He described his early days in a free state “as one might feel upon escape from a den of hungry lions.” He changed his last name, published two books, lived in Massachusetts, and gave a speaking tour in Britain and Ireland before moving to Rochester in 1847 to edit The North Star newspaper. He strongly supported women’s suffrage, attending the Seneca Falls Women’s Rights Convention in 1848. Fourteen years later, when he addressed the huge crowd in Himrod, Douglass was an internationally known abolitionist, author and orator. The enormity of his journey was not lost on Douglass, who once said in an oration, “The fact is, ladies and gentlemen, the distance between this platform and the slave plantation, from which I escaped, is considerable — and the difficulties to be overcome in getting from the latter to the former, are by no means slight. That I am here to-day is, to me, a matter of astonishment as well as of gratitude.”

His speech took place on July 4, 1862. Just about a year into a Civil War fought over slavery, Douglass’ speech was entitled “The Slaveholders’ Rebellion.” He spoke about the origin and nature of the Civil War. He also addressed controversies surrounding these topics, including the Confederates’ insistence that abolitionists started the war.

“Now the slaveholders came into the union with their eyes wide open, subject to a constitution wherein the right to be abolitionists was sacredly guaranteed to all the people. They knew that slavery was to take its chance with all other evils against the power of free speech, and national enlightenment,” he stated, deftly pointing out that the nation’s attempt to uphold both liberty and slavery was absurd and had made a civil war inevitable.

Douglass sharply criticized General McClellan for his dawdling movement of troops in Virginia and refusal to march on Richmond, costing more and more lives and money as the war dragged on. He also exhorted President Lincoln to declare slavery the absolute cause of the war. Even as late as 1862, many in the federal government, and even many pro-war Northerners, preferred to point out that preserving the Union was the cause of the war, although the Union was ultimately threatened because of slavery. (Douglass got his wish a few months later after the Union won a narrow victory at the bloody Battle of Antietam Sept. 17. Lincoln used the victory to write the Emancipation Proclamation, which went into effect Jan. 1, 1863).

Douglass was no stranger to addressing Independence Day crowds. Ten years before his Himrod event, he addressed the Ladies’ Anti-Slavery Society in Rochester with What to the Slave is the Fourth of July? “The rich inheritance of justice, liberty, prosperity and independence, bequeathed by your fathers, is shared by you, not by me. The sunlight that brought life and healing to you, has brought stripes and death to me. This Fourth [of] July is yours, not mine. You may rejoice, I must mourn. To drag a man in fetters into the grand illuminated temple of liberty, and call upon him to join you in joyous anthems, were inhuman mockery and sacrilegious irony,” he had said. “What, to the American slave, is your 4th of July? I answer; a day that reveals to him, more than all other days in the year, the gross injustice and cruelty to which he is the constant victim.”

Douglass’ Himrod speech stirred up many of the same anti-slavery emotions that his 1852 lecture had in Rochester. Although Yates County had many abolitionists — even an anti-slavery society in Dundee — a vocal number of pro-slavery residents harassed Douglass. Edson Lott, a boy who attended the speech, claimed his father had even punched one heckler in the face after the event was concluded.

The anti-abolitionist newspaper The Penn Yan Democrat reviewed Douglass’ speech in a grotesquely racist fashion. The rival newspaper, the Penn Yan Chronicle, praised the speech, but in the following week reprinted the Democrat report, pointing out its vulgarity and cruelty. The Dundee Record also reported on the event, mostly commenting on Douglass’ physical appearance (“he looks fully fifty years old, whereas his biography only makes him about forty-five”) and, somewhat off topic, harshly criticizing Fourth of July revelers who had consumed too much whisky and fought in the center of Himrod. They did admit that “although Fred was pretty severe…he told much wholesome truth.”

Douglass’ speech in Himrod, while an enormous event at the time, is largely unknown now, eclipsed by speeches at larger venues and his famous books. It is worth a read to understand the political movements going on with the president, cabinet, and generals at that precise moment, instead of names and dates of battles. The North, largely expecting a quick war, was in it for a long haul, and Douglass’ speech illustrates why. Douglass, always supportive of the war, went on to consult with Lincoln numerous times, especially over Black men in the Army. Two of his sons went on to join the 54th Massachusetts Regiment, and one worked as an Army recruiter for Black regiments.

After that day, the throngs of crowds left Himrod on the train and by road, and it retreated to a quiet community, with the exception of the trains coming into the station. The war stretched on for another three years, but in the end, it eradicated human bondage from the United States.

Tricia Noel is the executive director of the Yates County History Center.