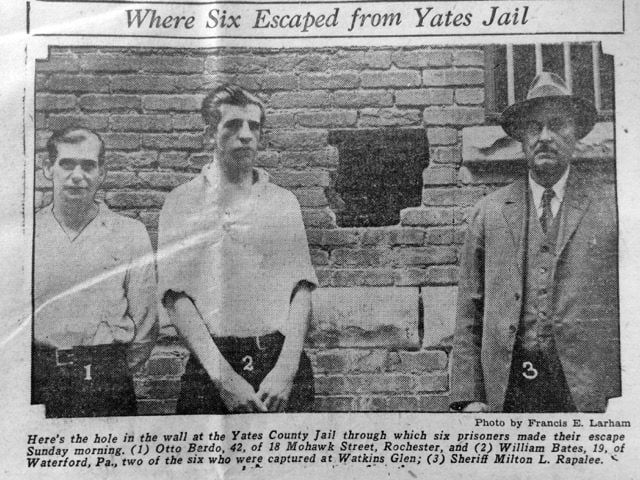 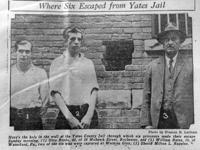 Six men escaped from the Yates County Jail in 1931. 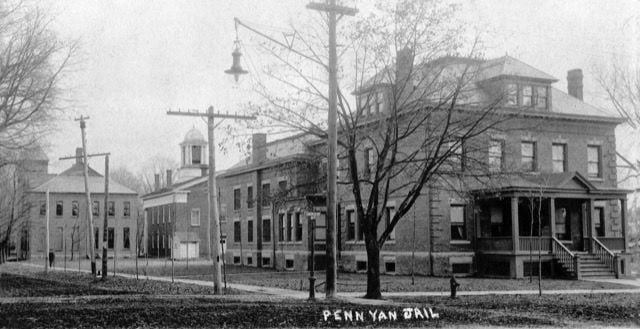 Six men escaped from the Yates County Jail in 1931.

My uncle grew up in Penn Yan in the 1930s. He once told me a story about him and his friends as teenagers walking on the Court Street sidewalk alongside the old Yates County Jail. One of them would holler “What kind of birds can’t fly?” and then all of them would holler “JAILBIRDS!” Then they would all laugh at the verbal abuse hurled at them from the other side of the barred windows. The notorious prison break from Dannemora in the summer of 2015 got me thinking about a few notorious escapes from our Yates County Jail over the years when a few of those birds flew.

There were several jailbreaks over the years, but I’ll pick a few of the more notable ones that I have run across in local newspapers. The first was in September 1903 when the jail was located about where the flagpoles are now in front of the county office complex on Liberty Street. The headline read (appropriately enough) “Jail Bird Escapes.”

Sheriff Frank Crosby went into a large cell where the inmates were reading in order to put them into their individual cells for the night. He was pushed from behind and the large cell door was locked by the soon-to-be escapee. The sheriff was now the prisoner and his captor, who had been arrested three months earlier, was only known as John Doe. He had been charged with burglary, refused to give his name and never sent or received any mail. He locked the large wooden door to the cell area, took the key and stepped into the hallway to make his exit. He was confronted by Mrs. Crosby, who tried to stop him (at the time, the sheriff’s family had living quarters in the jail.) John Doe suddenly produced a revolver, pointed it at her head and threatened to shoot if she didn’t get out of his way. He then left the building, fired his pistol twice into the air apparently to let everyone know he was armed and dangerous and then took off for parts unknown. He was later spotted in Geneva and Canandaigua and it was assumed he had hopped a train and was out of the area. Mrs. Crosby summoned village police by telephone; they came and broke the wooden door down and released her husband. Nobody had any idea how John Doe got the revolver.

That escape may have been the deciding point on replacing that jail building. It had been built in 1857 after the previous jail, a wood frame structure, was burned down by an inmate who had been arrested for arson (ironic, eh?) It was stone construction but it was more than 40 years old and outdated in many ways. In 1904, the county Legislature set aside funds to build a new jail just to the north of the old one on the corner of Liberty and Court streets.

The “new” jail was larger, more secure, with a brick exterior. It wasn’t long before it experienced its first jailbreak in December 1906. Three prisoners escaped in the middle of the night — two had been arrested for robbing the money drawer at the New York Central depot in Penn Yan and the third one, described as “a Texas cowboy,” was in for writing bad checks. They had obviously used keys to unlock their cells and the other doors, but no keys were missing. It was believed that the men hopped a freight train and headed toward Himrod.

County supervisors offered a $200 reward for their capture and held an inquiry into the escape. They found no fault with the new jail’s layout. A grand jury was summoned to inspect the jail and agreed that the layout was not at fault but did suggest a few security improvements. The conclusion they all reached was that Sheriff Elias Pulver was somehow guilty of negligence. A week later, the Yates County Chronicle ran this story:

“JOKE IS ON THE SUPERVISORS — The resolutions passed by the Board of Supervisors which have been widely published seem to reflect on Sheriff Pulver’s carelessness, but the joke now seems to be on the supervisors, because it is very evident that the prisoners could escape without the jailer being at all careless. The way in which the escape was made is related by Bert Tracy (the Texas cowboy), who was captured last week at Owego. He was arrested there for once again passing bad checks. On his person he had stationery from the Penn Yan jail. Sheriff Pulver was contacted and went to Owego. When he arrived and confronted Tracy, the forger denied having ever seen him, but what is known as ‘the sweat process’ was finally adopted and Tracy then confessed how the three prisoners escaped. He said that three clamps of malleable iron were removed from the bars of the padded cell. From these, keys were filed. It turned out that Tracy was not his name and he was not a Texas cowboy. His name was Elias Cooper, and he was from Owego, where he had been arrested earlier for stealing horses.”

A more dramatic and notable jailbreak occurred in October 1931. Six inmates used a “20-penny spike” and chipped away at the brick and mortar in the corner of the shower room, hiding the mortar in a pail. The hole they made measured about 13 inches across. It was close to the ground and they were able to grab the window bars to hoist themselves out. One young inmate in the room refused to go and was beaten up by the six who escaped. Early the next morning, when Sheriff Milton Rapalee reported to the jail, he was told by prisoners in other cells that “the boys have gone.” Reports of the escape caused excitement in the community and touched off a massive manhunt.

Two of the escapees, both arrested for writing bad checks, were captured within 24 hours as they dined at a Watkins Glen restaurant. Two more were captured separately in December, two months later. Both had been in the Yates County Jail serving 60-day sentences for escapes the previous July. At that time they were considered “trusties,” working outside the jail, and simply walked away. One was captured in Pennsylvania and sent to the Monroe County Penitentiary for another 120 days. The other was captured by state troopers hiding out in a cabin near Clyde with his brother (who was an escapee from Auburn prison.) He had stolen a car in Rushville after the jailbreak; it was later found abandoned near the railroad in Geneva. He hopped a freight eastbound to connect with his brother. Hiding in the cabin in a large willow thicket near Clyde, they broke into several cottages along the river. Those were reported to the state police, who closed in on the willow thicket to make the capture. He also was sent to Monroe County for another nine months.

And then there were two.

Escapee No. 5 was captured in March, six months after the jailbreak. He had been constantly on the run, going as far south as Alabama. However, he returned to his home near Elmira in March to visit friends and relatives. An anonymous tip informed the police of his whereabouts and he was captured without incident. After a brief return to Penn Yan, he was sent to Monroe County for another six months. That left the last of the six still on the loose. In jail after being arrested as a public nuisance, he was considered to be the brains behind the jailbreak and was apparently smart enough to avoid capture.

Following that October 1931 jailbreak, the state Commission of Correction reviewed an inspection of the Yates County Jail. They laid the blame on Sheriff Milton Rapalee for not running a secure lockup. No one was on supervisory duty in the jail at night and doors were left unlocked so prisoners could get from their cells to the bath area (where the hole was chiseled). It was determined that the locks on the cells did not work adequately anyway. The state also blamed the county Legislature for not maintaining the jail building over the years. The commission threatened to close the jail if the deficiencies were not addressed. They were.

MacAlpine is the editor of “Yates Past,” the Yates County History Center’s bimonthly publication. He has written several books on local history. This year he has a book being published in the United Kingdom based on a series of letters written to a Penn Yan woman by her cousin who lived in Sheffield, England during the Battle of Britain that described what she and her city were going through during the bombing — “Letters From the Blitz (1939-1942).” It will be available in the U.S. early in 2021.

Legal Notice PLEASE TAKE NOTICE that the Village of Shortsville