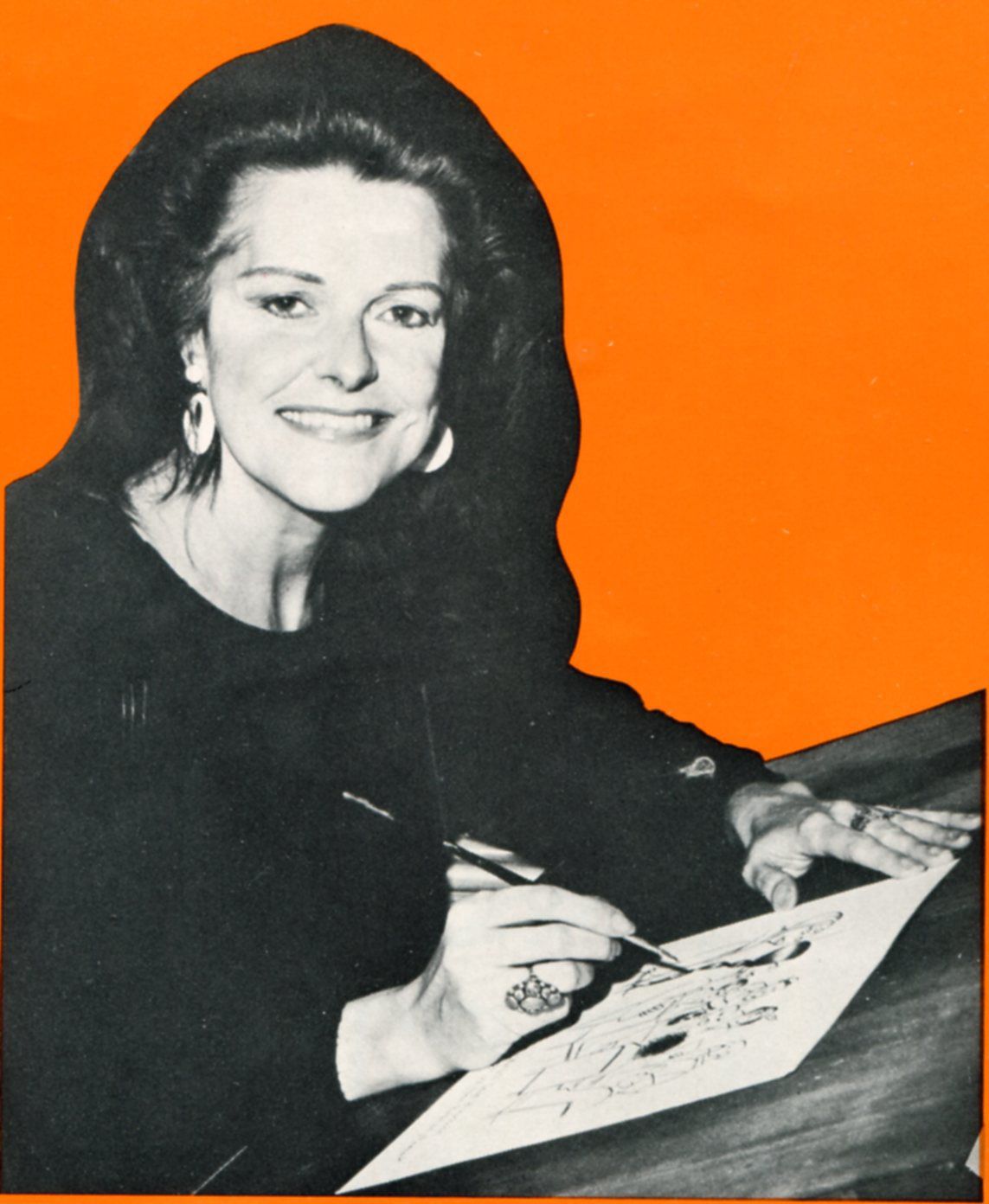 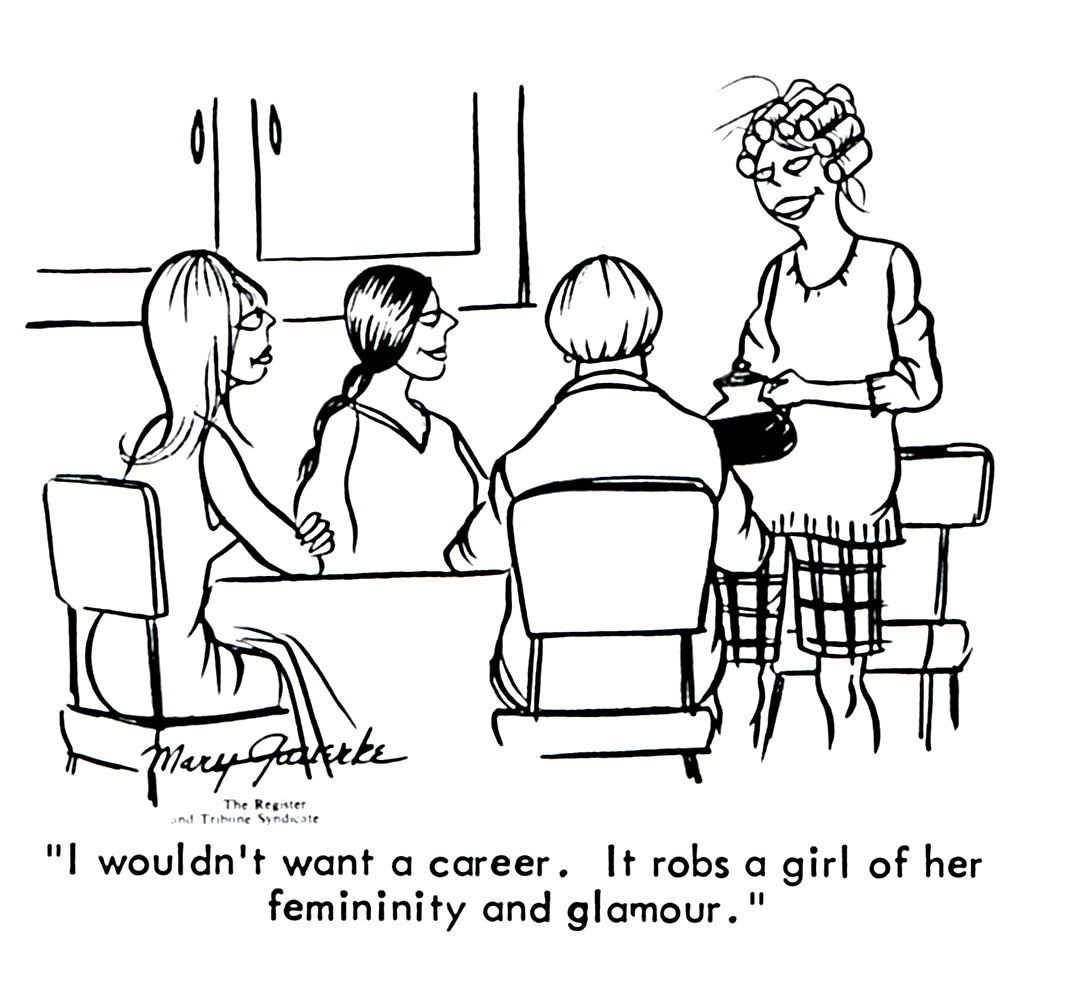 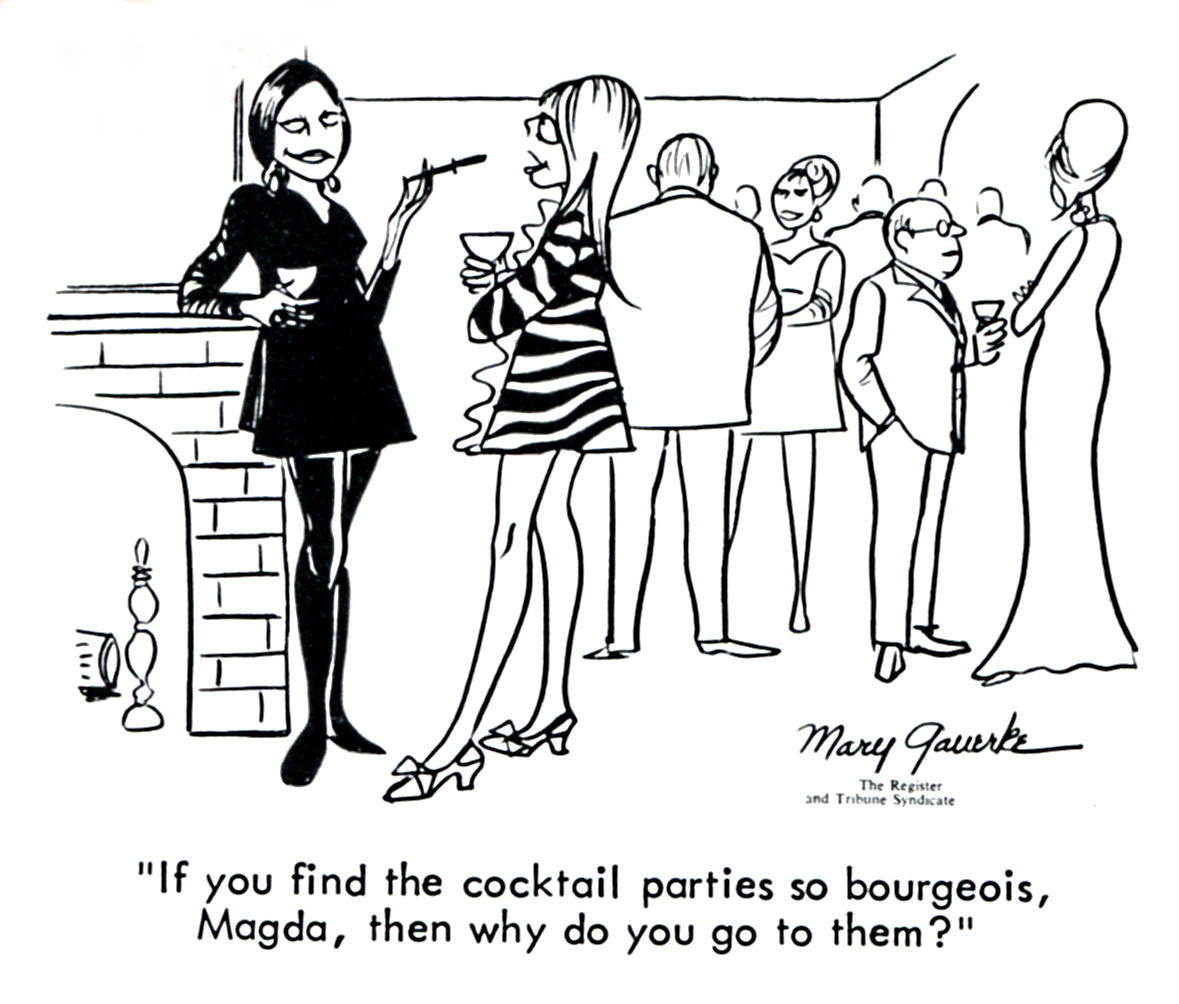 A cartoon from Mary Flanigan Gauerke’s “The Alumnae” series.

A cartoon from Mary Flanigan Gauerke’s “The Alumnae” series.

Women cartoonists have always been an industry minority. Mary Flanigan Gauerke was a successful freelance cartoonist from the 1950s to the 1980s and may have been the only woman to sell cartoons to Hugh Hefner and William F. Buckley Jr. at the same time.

Mary’s family moved to Geneva when she was a year old. Her father, Lon Flanigan Sr., worked for Seneca Kraut & Pickling Co., which he purchased in 1938. The business passed to Lon Flanigan Jr. in 1960 and Mary served as a director. In 1980 they sold the company to Seneca Foods.

Mary graduated from Geneva High School in 1944. Her yearbook entry said, “A keen sense of humor … Likes to draw pictures.” A 1967 Geneva Times article had “the rest of the story.” A teacher discovered “a batch of her drawings … which included some caricatures of the faculty and staff [that] were not altogether flattering.” Mary received a stiff reprimand after the adults had a good laugh.

After high school, Mary went to Stephens College in Missouri to study art. She returned to Geneva, marrying Hobart graduate Carl Gauerke in 1948. After relocating to New Jersey and having a son, she began drawing cartoons as a suburban housewife.

Mary specialized in one-panel, or “gag” cartoons. Magazines and newspapers used them wherever there was space. Publications might buy the rights to the gag and have it drawn by staff artists. In 1955 Playboy bought two gags for $10 each. Hugh Hefner wrote Mary that “this isn’t meant as any sort of negative reaction to your own work,” and continued to buy cartoons from her over her career.

In 1956 the Geneva Daily Times announced, “Genevan’s Cartoon Is In New Yorker.” The New Yorker had purchased Mary’s ideas to be redrawn, but “this time the drawing is [her] own work.” The Times said, “to aspiring cartoonists [this magazine] is like breaking into the major leagues.”

William F. Buckley Jr.’s conservative magazine National Review was a steady client for Mary. Patricia Buckley wrote, “Mary Gauerke’s first cartoon arrived over the transom in January 1966 and was published in an early February issue. It was a rare issue of NR that went to bed anytime in the next 10 or 15 years without a distinctive Gauerke drawing.”

In 1969 Mary began a nationally syndicated, six-days-a-week panel called “The Alumnae.” The Geneva Times carried it for its full run from September 1969 to April 1976. Although the syndicate pitched that it “can make your Women’s Page the Outstanding Spot in your newspaper,” the Times used it wherever there was space.

There were four characters representing women of the period. DeEtte, the youngest, “live[d] only to be dressed up.” Magda was an avant-garde quasi-hippie. Myra was the leader and a “clubwoman,” and Helen was a housewife. The syndicate’s promotional material said, “These amusing gals are right out of today’s contemporary crowd — the young women you see around you every day.”

Like most topical cartoons, “The Alumnae” seems dated today, especially if you weren’t alive then. The characters’ relevance faded as America changed in the 1970s. Mary continued to work through the 1980s, particularly for the National Review. She slowed down due to illness and died of heart failure in 1989. Her name pops up on the Internet in dictionaries of women cartoonists, but there isn’t a comprehensive list of her work and where it appeared.

Marks is the curator of collections at the Geneva Historical Society.