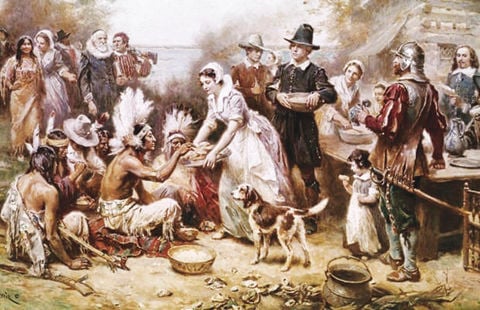 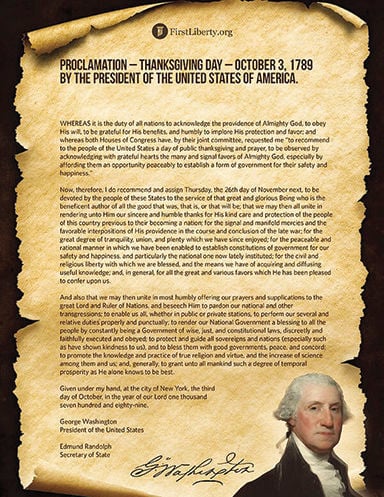 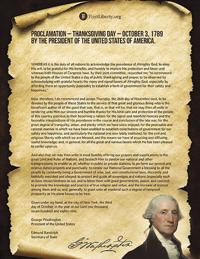 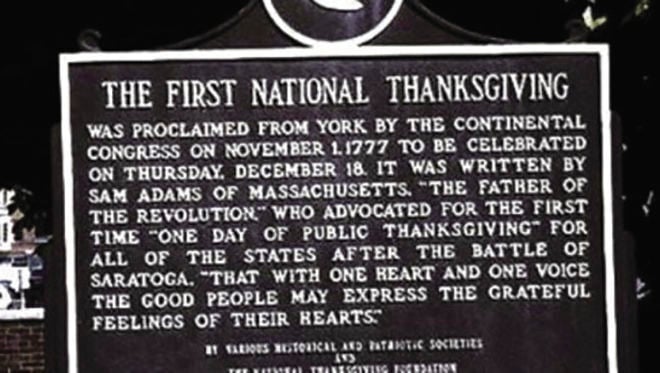 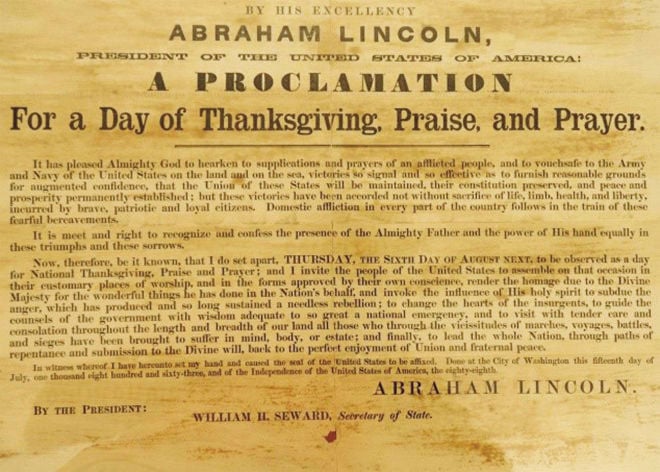 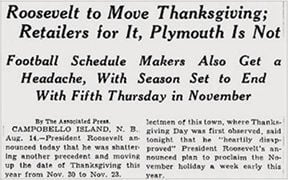 A newspaper article about President FDR moving the Thanksgiving holiday.

A newspaper article about President FDR moving the Thanksgiving holiday.

Most stories of Thanksgiving history start with the harvest celebration of the Pilgrims and the American Indians that took place in the autumn of 1621. Although they did have a three-day feast in celebration of a good harvest, and the local American Indians did participate, this “first thanksgiving” was not a holiday, simply a gathering. It took place at some unknown date between Sept. 21 and Nov. 9, most likely in very early October. There is little evidence, however, that this feast of giving thanks led directly to our modern Thanksgiving Day holiday.

In fact, several specific celebrations have been claimed as the actual origin of our Thanksgiving. One goes all the way back to May 29, 1541, when, in the Palo Duro Canyon in Texas, a Thanksgiving Mass marked the finding of food and shelter for the Francisco Vasquez de Coronado expedition. Also, it wasn’t until the mid-1800s that New Englanders began to refer to the 1621 feast of the Plymouth colonists and nearby Indians as the “first Thanksgiving.” In addition, there are European origins to what has become known as Thanksgiving Day. Many religions have prayers of thanks and special ceremonies of giving thanks after harvests as well as other times.

Given all of these examples, it is difficult — if not incorrect — to say that the “first Thanksgiving” began with the Pilgrims in 1621. As a result, we need to look into what our federal and state governments have done in terms of formal proclamations of a day of thanksgiving.

The Continental Congress and the Confederation Congress issued several proclamations from 1774-89, for “National Days of Prayers, Humiliation and Thanksgiving.” An Oct. 3, 1789 proclamation by President George Washington created the first Thanksgiving Day to be designated by the national government of the United States of America. He assigned the last Thursday in November to be the actual day. On Jan. 1, 1795, President Washington proclaimed Thanksgiving Day to be observed on Thursday, Feb. 19. President John Adams declared Thanksgivings in 1798 and 1799. His successor, Thomas Jefferson, however, was a deist and did not declare any Thanksgiving days during his presidency. In response to resolutions of Congress, at the close of the War of 1812, President James Madison declared the holiday twice in 1815. There was no such celebration in 1816. Presidential proclamations of a Thanksgiving Day came to a halt, leaving it up to each individual state to have its own observance.

Some states took action. In 1817 New York Gov. DeWitt Clinton established an annual Thanksgiving Day for the state. Texas and North Carolina declared statewide Thanksgiving Days. Many southern leaders, however, did not want to celebrate Thanksgiving, which these leaders saw as a “Yankee holiday laced with overtones of abolitionism,” due in part to the northern practice of giving public speeches on that day, some of which referenced the evils of slavery.

The idea of a national Thanksgiving Day was being promoted by Sarah Josepha Hale, editor of Godey’s Lady’s Book and Ladies’ Magazine and author of the famous nursery rhyme “Mary Had a Little Lamb.” As early as 1827 she began a one-woman crusade to have Thanksgiving celebrated as a national holiday. She believed that a nationwide celebration would be a logical bond of the union. Starting in 1847 she petitioned presidents and governors of the states and territories to establish a common day on which to celebrate Thanksgiving. In her magazines she published an annual editorial arguing for the establishment of a national Thanksgiving Day. Following the example set by President Washington, she said that the last Thursday of November should be set aside for the day. In 1859 she believed that the national celebration of Thanksgiving would bring the Union together and avert war. That year 30 states and two territories celebrated Thanksgiving Day on the last Thursday of November.

A more “official” Thanksgiving Day arose during the Civil War. Confederate President Jefferson Davis declared a “day of fasting, humiliation and prayer” to take place on Nov. 15, 1861; however, the word “thanksgiving” does not appear in Davis’ message. Less than a year later, Davis proclaimed a different day — Thursday, Sept. 18 — as “a day of prayer and thanksgiving to Almighty God for the great mercies vouchsafed to our people, and more especially for the triumph of our armies at Richmond and Manassas.”

Building on the Union victories at Gettysburg and Vicksburg, Sarah Hale met with President Abraham Lincoln and pleaded her cause. President Lincoln, on Oct. 3, 1863, issued a Thanksgiving Proclamation that declared the last Thursday in November (using the date that George Washington had proclaimed) to be a day of “thanksgiving and praise.” It is important to remember that at this time in our nation’s history, we had only two national holidays — Washington’s birthday and the Fourth of July.

It would take another year for the idea of a basically national Thanksgiving Day to take hold. Acting on President Lincoln’s Thanksgiving Day proclamation for 1864, the War Department organized solicitation for donations and then the delivery of 400,000 pounds of ham and turkey, will all the trimmings, as well as fruits and cakes to Ulysses S. Grant’s headquarters in City Point, Va. Although these donations were not distributed to all Union forces, it was an unprecedented effort. It also is true, however, that many civilians, especially those in southern states, were seriously lacking in food items to “celebrate” a Thanksgiving Day.

Even after the Civil War ended, few southerners celebrated Thanksgiving. Resistance to the idea of celebrating the Thanksgiving holiday on the northern model hung on through Reconstruction.

For the next 75 years after Lincoln, succeeding presidents honored the tradition he established and annually issued their own Thanksgiving Proclamation. The situation changed in 1939, when the last Thursday of November was going to be Nov. 30. Retailers complained to President Franklin Roosevelt that a Nov. 30 Thanksgiving Day would leave at best only 24 shopping days — at a time when many states had “blue laws” barring department stores, etc. from being open on Sunday — before Christmas. So, when President Franklin Roosevelt issued his Thanksgiving Proclamation in 1939, he declared the date of Thanksgiving to be Thursday, Nov. 23, the fourth Thursday of the month.

President FDR’s proclamation created an uproar. Many people throughout the United States simply disliked this change to what had become a tradition. Perhaps more seriously, moving the date of Thanksgiving disrupted already made vacation plans, football schedules, and calendar production.

Since the Thanksgiving date was determined by federal law, individual state governors were left to decide whether their state would side with the president or keep the holiday on its traditional date. In 1939, 23 states celebrated Thanksgiving on the old date, 22 states on the new one, and three states on both days. For many, the two dates came to be known as “Republican Thanksgiving” and “Roosevelt’s Thanksgiving” (or “Franksgiving” based on the president’s first name). As a result, 1939 became known as the year with two thanksgiving days.

In 1940, President Roosevelt again moved Thanksgiving to the second-to-last Thursday in November. In that year, 32 states celebrated the president’s desired day, while 16 states still stayed with the traditional day. In early 1941, data from the Christmas shopping season in both 1939 and ’40 suggested that making Thanksgiving come earlier than the last Thursday in November hadn’t had a significant affect on sales, so President Roosevelt was inclined to move Thanksgiving back to its traditional date, starting in 1942. However, on Dec. 26, 1941, through a law passed by Congress and signed by the President, the official date for the national Thanksgiving was the fourth Thursday of November each year. That is why our annual Thanksgiving Day is the fourth Thursday of November.

So, as we gather for Thanksgiving, we probably need to realize that perhaps some things we may have thought to be true about the history of this holiday are not necessarily correct. But, at the same time, that food feast will be a joy to consume!

Walt Gable is the Seneca County historian who writes frequent “Looking Back” columns for the Finger Lakes Times.