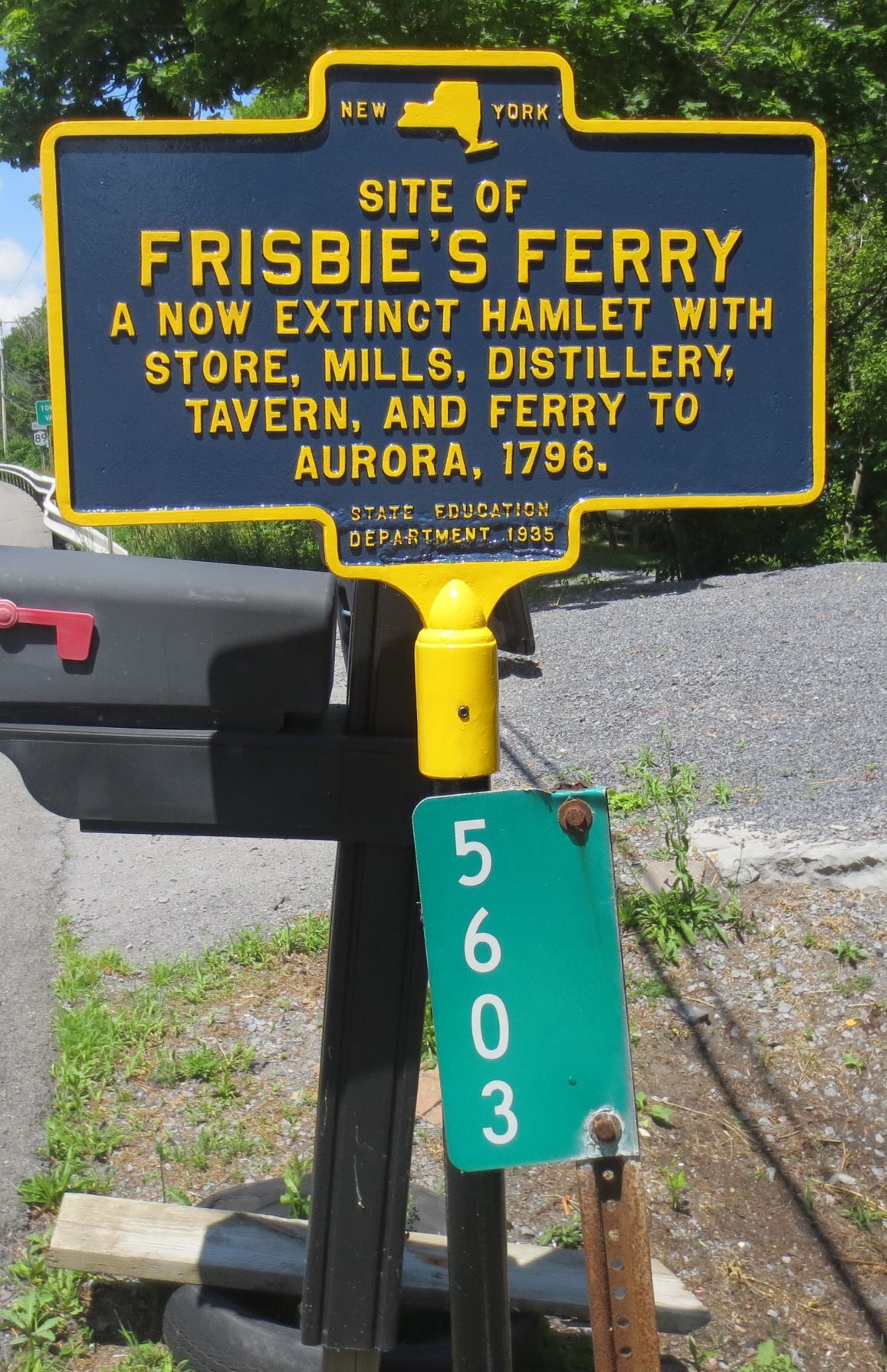 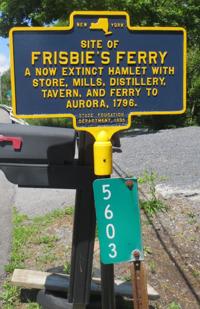 The graves of Abel and Rebecca Frisbie at Mt. Green Cemetery in Romulus. 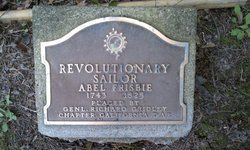 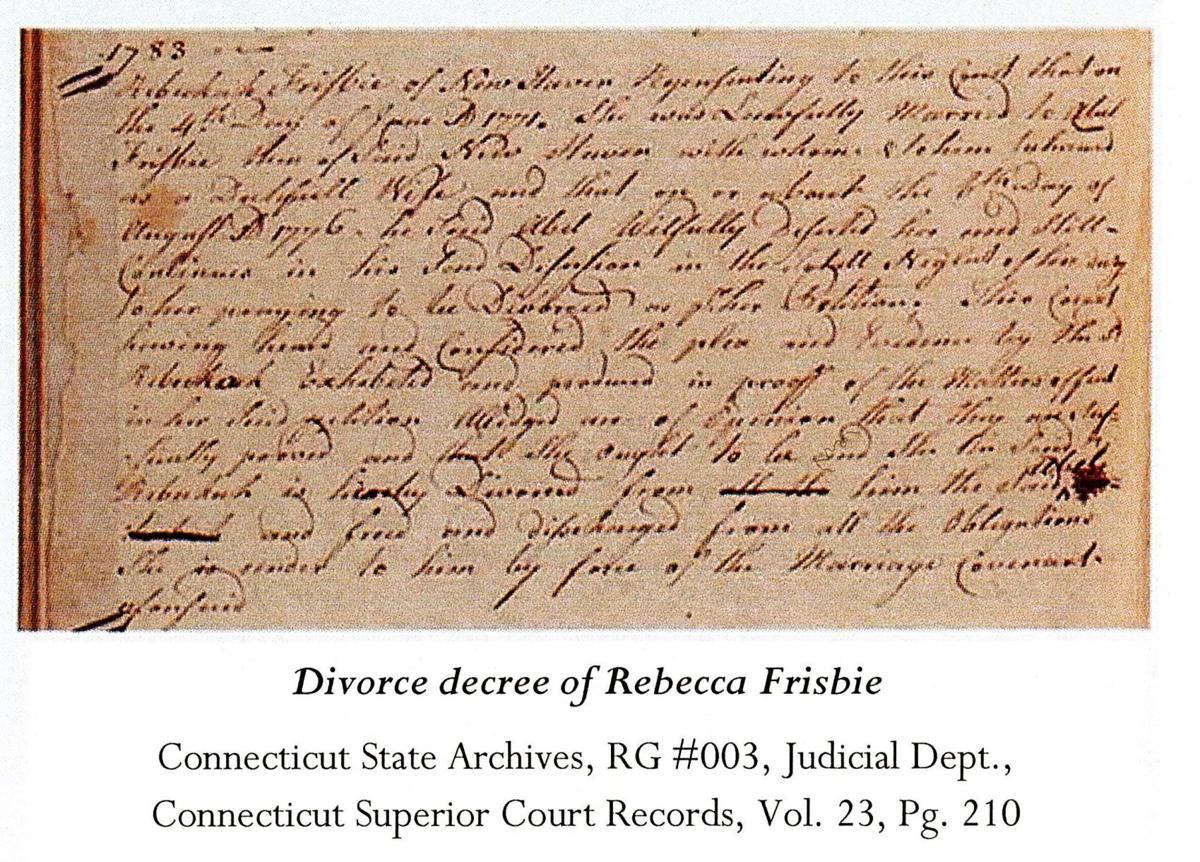 The divorce decree of Rebecca Frisbie. 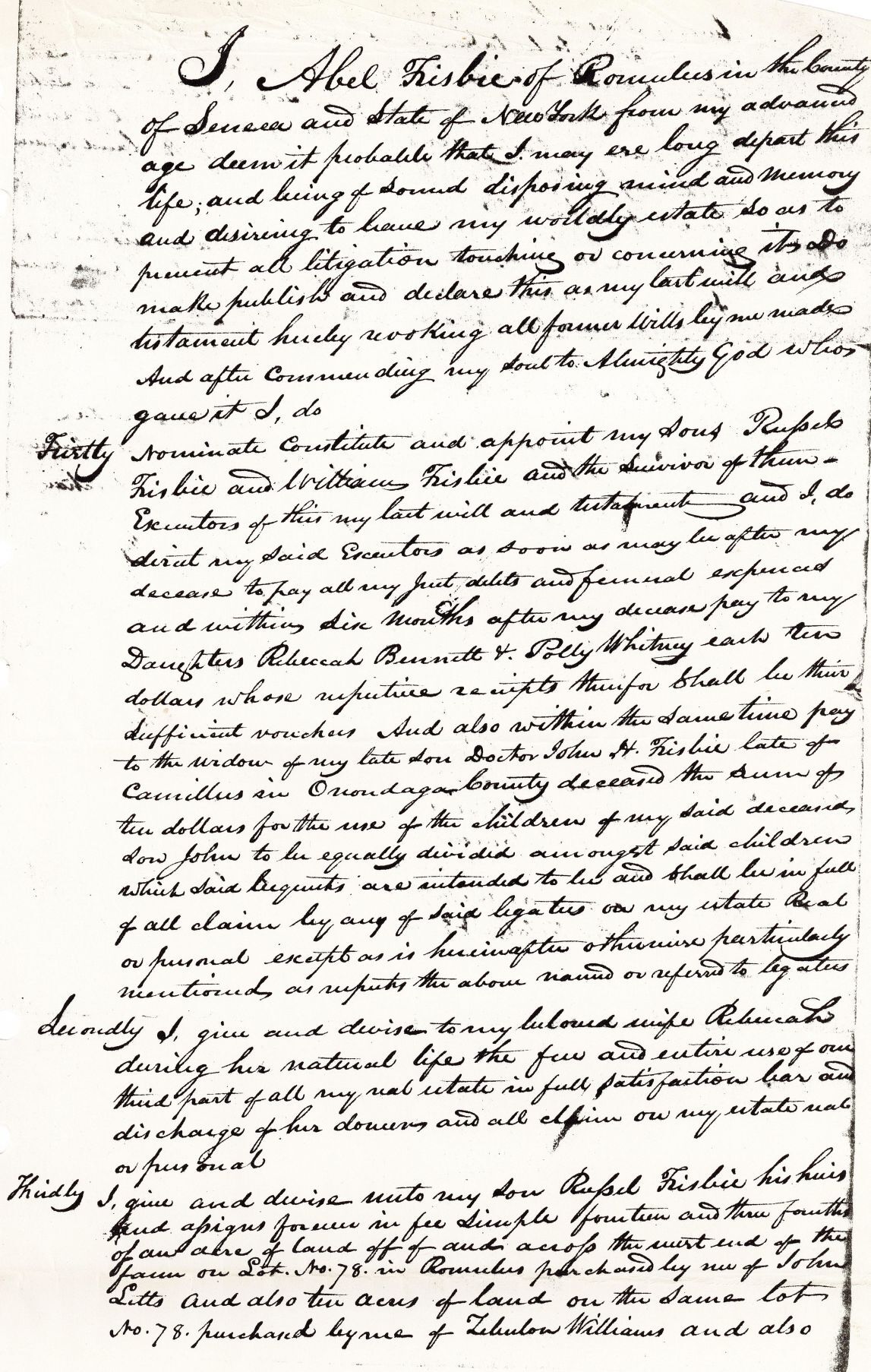 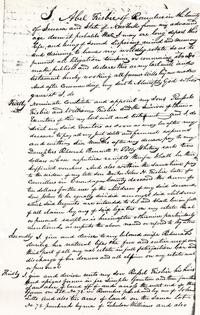 The first page of Abel Frisbie’s will. Frisbie, a former seaman, ran a ferry service on Cayuga Lake in the early 1800s.

The graves of Abel and Rebecca Frisbie at Mt. Green Cemetery in Romulus.

The divorce decree of Rebecca Frisbie.

The first page of Abel Frisbie’s will. Frisbie, a former seaman, ran a ferry service on Cayuga Lake in the early 1800s.

One of the recently refurbished historic markers in Seneca County is the Frisbie’s Ferry marker on Route 89 in the town of Romulus. That ferry was operated by Captain Abel Frisbie. Before he operated that ferry, his life was marked by seafaring tragedies and his wife having two husbands.

Abel Frisbie was born on March 8, 1742 in Branford, Conn. to Caleb and Mary Wilford Frisbie. Branford is a shoreline town on Long Island Sound, eight miles east of New Haven. Given that geographic location and the fact his father was a ship captain, it should not be surprising that Frisbie became a sailor. Initially, he sailed on vessels carrying on trade between the West Indies and the Carolinas.

On June 3, 1771, he married Rebecca Hayes. Rebecca was the aunt of Rutherford Hayes, who was the father of Rutherford Birchard Hayes, the 19th president of the United States. Their marriage seemed to be a happy one, even though Frisbie was away from home for long stretches. Two children were born to the young couple in rapid succession: John Howell Abel in 1772 and Rebecca Abel in 1774.

A sailor’s life is not without risk and that was certainly the situation for Captain Abel Frisbie. In early 1776 his ship, the Sea Flower, floundered in heavy seas. Only Frisbie and a few other crew members managed to survive by swimming to shore. Next, Frisbie was commanding another ship when a sailor was nearly attacked by a shark. The sailor had decided to take advantage of calm waters and get himself a good washing. Frisbie fortunately noticed that a shark was approaching the sailor from behind and ordered him back on board. The man’s obedience was immediate and he was saved.

Now, for the true story of how his wife Rebecca managed to have two husbands. Early in the Revolutionary War, Frisbie entered the U.S. Navy. Rebecca did not know that her husband had been captured after a shipwreck and spent seven years in a British stockade before he managing to escape. All she knew was that for about seven years she hadn’t heard anything about her husband and that she had fallen in love with John Mix of New Haven. She decided that waiting seven years was long enough and took the formal steps to dissolve her marriage. In August 1783 she petitioned the Connecticut Superior Court for a divorce on the grounds of desertion. The court record includes the statement that “… Abel [Frisbie] did on or about August 6, 1776 willfully deserted her [Rebecca] and has totally neglected his duty to her.” Rebecca was granted her divorce and she and John Mix married. On June 26, 1784, they had a daughter, whom they named Elizabeth.

One month after this birth, Frisbie reappeared with a tale of his long disappearance and a clearly expressed desire to have his wife and family back. Following what must have been a heated discussion, a deal was reached. Each of her two “husbands” would have 10 minutes alone with Rebecca to plead his case and then she would decide which to have as her husband. Would she choose her first husband, Abel, the father of her first two children and the man that had seemingly deserted her for over seven years, or her second husband, John, the father of their 1-month-old Elizabeth. She chose Abel. John Mix honorably accepted her decision, although it is said that he never recovered from the shock of losing her. Frisbie presented a petition to the New Haven Superior Court at its August 1784 term and the divorce of the previous year was reversed. That meant that Abel and Rebecca were once again legally husband and wife. They had three more children: Mary in 1786, Russell in 1788 and William in 1789.

Realizing what could happen if he continued his sailing work, Frisbie turned to farming in the Hudson Valley of New York, but without much success. Deed records show that on July 16, 1795 Ezekiel Hayes and Abel Frisbie acquired 200 acres in the southeast corner of Romulus Lot 78, with 100 of these acres going to Abel and Rebecca Frisbie. Given his sailing background, his lack of success in farming and that this property is on the west shore of Cayuga Lake, it should not be surprising that Frisbie soon turned to operating a ferry route on the lake.

In 1796, his “ferry” consisted of a rowboat to and from Aurora — a distance of 3 miles — so that the people in the vicinity of Romulus Lot 78 could obtain their mail at the post office in Aurora. Although he may have received a state license earlier, there are records that show that in May 1814 Frisbie was granted a state license to operate a ferry across Cayuga Lake from his house in Romulus to Aurora on the east shore. He ferried passengers and mail in all seasons. The fares were 37.5 cents per person and 19 cents for every 100 pounds of goods.

As his ferry operation prospered, he built a tavern and a distillery on his shoreline property. He was one of the “first class” electors (voters) in the town of Romulus. These “first class electors” had to possess properties valued at least at 100 pounds over and above all outstanding debts.

Frisbie died on April 28, 1825; his wife Rebecca died that December. Both are buried in Mt. Green Cemetery, in the hamlet of Romulus.

The Seneca County Board of Supervisors in February 2020 authorized funds for the restoration of several historic markers in the county. The Restoration Team decided that the Frisbie’s Ferry marker was one of those most in need of repair. The marker had been erected in 1935 and at some unknown date had been badly damaged, probably as a result of a vehicular collision. Now the restored marker stands as visible evidence of the once flourishing little hamlet that grew up at the site of Frisbie’s Ferry on the west shore of Cayuga Lake.