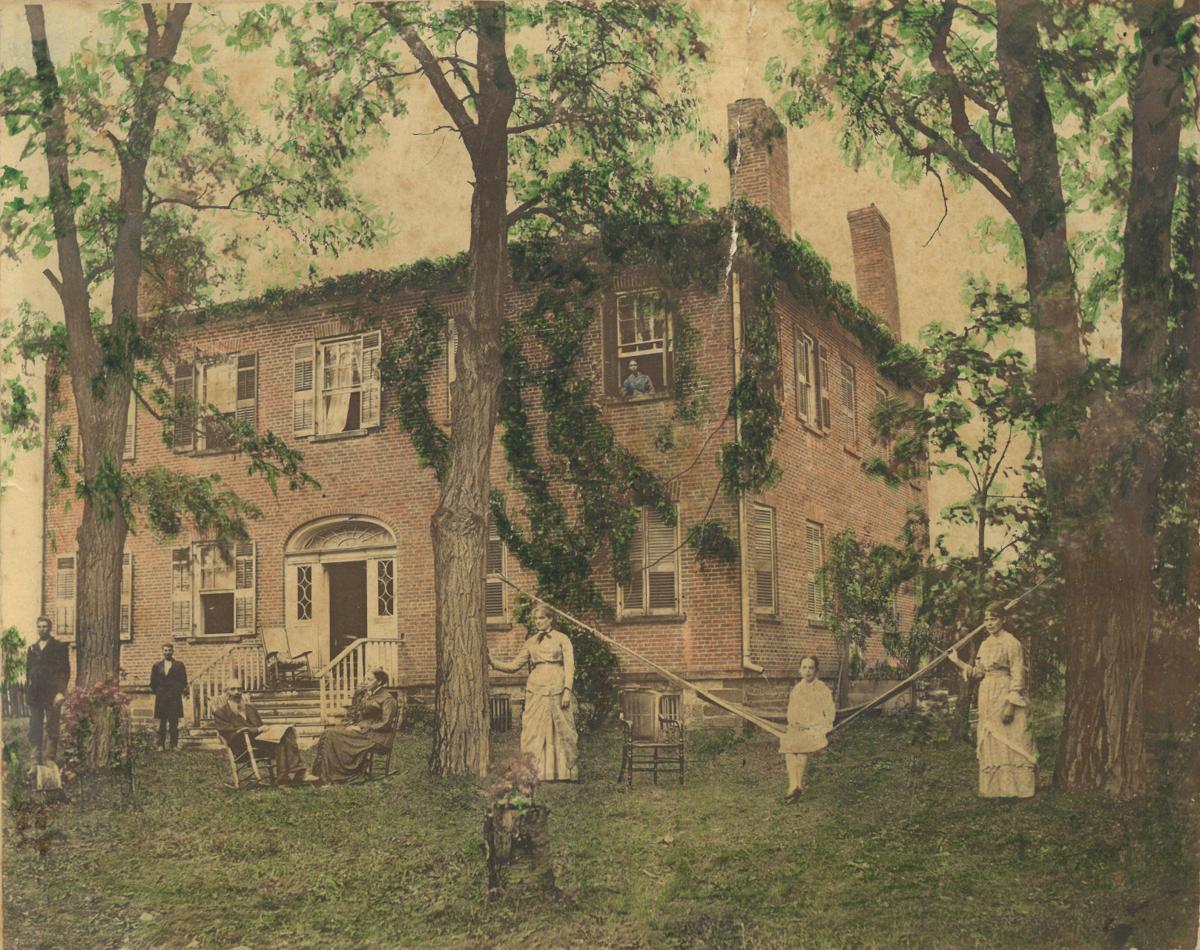 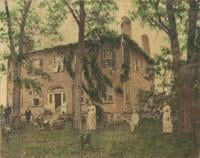 The Dox house, which burned around 1920, is the house built by Abraham Dox and his wife, Anne Cary Nicholas. It was adjacent to the Mingo farms. 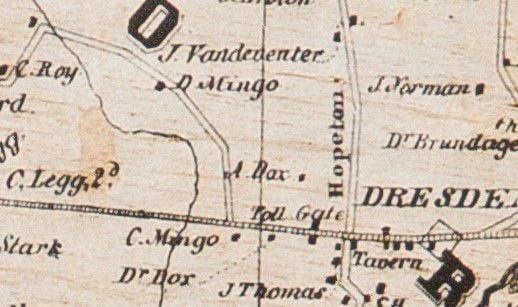 This page from the 1850 census lists Mingo, his wife Maria and daughter Delight. Daughter Nancy and her husband, Sidney Babcock, are the next household over.

The Dox house, which burned around 1920, is the house built by Abraham Dox and his wife, Anne Cary Nicholas. It was adjacent to the Mingo farms.

This page from the 1850 census lists Mingo, his wife Maria and daughter Delight. Daughter Nancy and her husband, Sidney Babcock, are the next household over.

By the time Abraham Lincoln signed the Emancipation Proclamation into law Jan. 1, 1863, Yates County was the home to numerous active abolitionists and Underground Railroad sites. However, decades before abolitionism became a popular cause in the county in the 1840s and ’50s, a formerly enslaved couple settled in what is now the town of Torrey and raised their family — likely the first Black family in the township and one of the first in Yates County.

In 1803, John Nicholas and Robert Selden Rose, whose wives were sisters, left Virginia with their families and traveled north to build homes in Geneva on opposite sides of Seneca Lake. John Nicholas was the son of Robert Carter Nicholas, a member of the Virginia House of Burgesses and one of those who witnessed Patrick Henry’s famous speech at the Second Virginia Convention in 1775. John’s sister, Betsey, had married Edmund Randolph, first U.S. Attorney General and a member of George Washington’s Cabinet.

Although tied to wealthy and powerful families, Nicholas and Rose uprooted themselves, their families and dozens of enslaved people to start over again in the thinly populated Finger Lakes. Nicholas sold his Stafford County, Va., plantation named “Hampstead” and made the long trip in coaches constructed by enslaved men on the farm. In central Pennsylvania, the Nicholas and Rose families went east to travel by way of Albany, and the enslaved people were sent to walk or travel in wagons over the mountains, with an overseer named Fitzhugh.

In 1806, the Nicholas home in Geneva, named White Springs, was finished. Nicholas envisioned a Southern-style plantation economy and planted large amounts of wheat to ship to Maryland and Virginia. He also owned about 1,200 sheep and had a wool factory constructed at White Springs in 1812. Work in the fields, tending the sheep, operating the factory, and caring for the lavish house and housework was all done by enslaved people brought from their Virginia home.

Two of the enslaved people brought by the Nicholas family were Mingo and his wife, Maria, who were aged around 40 and 30, respectively, when arriving in Geneva. Enslaved people at White Springs likely lived in an area about a mile away, on present-day Hastings Road. Like many people held in bondage, Mingo did not have a surname. Upon becoming free, Mingo served as both his first and last name, and his wife and children used Mingo as their last name.

Mingo was a common name among enslaved men in the South. Historians believe that the name goes back to the tradition in some African cultures of naming children after the day of the week on which they were born, and that Mingo may be short for Domingo, which means Sunday in Spanish and Portuguese. Other day names include Cuffy (or Kofi, for Friday), the name of another man enslaved nearby.

Nicholas emancipated one person in 1808, two brothers in 1811 and another man in 1815, although the 1810 census still listed seven slaves in the household. New York state law, which had adopted gradual emancipation, would not allow slavery much longer — children born after July 4, 1799 became free once males turned 28 and females turned 25, with all slaves freed automatically in 1827.

From slavery to freedom

Mingo was possibly the person freed in 1808. It is likely that he and his family left the White Springs area in 1811, when the eldest Nicholas daughter, Anne Cary, married Abraham Dox, and briefly went to work for them. The Doxes were given Hopeton Mills by John Nicholas, and moved to the booming new village of Hopeton in Yates County. The village, now completely gone, included the gristmill, village square (now covered by Route 54), houses and buildings, tavern, school, and cemetery. Dox built a large brick mansion on the corner of present-day Route 54 and Roy Road in Torrey.

Mingo — who by this time was called Mingo Mingo in the census and court documents, or simply “Old Man Mingo” in Yates County — purchased two plots of land near Hopeton shortly after arriving in Yates County, filing deeds on Dec. 31, 1812. This land was on the southern edge of the current Route 54 east of Penn Yan, directly across from the entrance to Roy Road, and across from where Dox would later build his grand home. The Mingo family would end up owning several connected properties around this intersection.

Five years after purchasing land, Mingo appears on a list of students in a school run by John L. Lewis in 1817 in Hopeton.

Mingo and Maria raised a family of children, several who died at young ages, plus Daniel, Robert “Cob” (who later took up the original farm), Delight, Kataline and Nancy, many of whom stayed in the Hopeton-Dresden area. By 1850, Mingo’s original farm was listed at 171 acres and valued at $4,200, with an assortment of horses and livestock. In 1848, Yates County awarded Mingo damages for cutting “the highway” (Route 54) through his property. Within a few years, the family began to expand its land holdings. On local maps from 1855 and 1865, the Mingo children owned a property in the Village of Penn Yan, the farm on Route 54, three homes on Roy Road in Torrey and one in the Village of Dresden.

The Mingo children married into the Babcock and Watkins families, and Mingo and Maria ended up with a number of grandchildren. The next generation faced challenges and heartbreak. Several grandsons fought for the Union Army in the Civil War, Daniel lost some of his property due to financial hardship and tragically three of Daniel’s children were killed in a house fire.

In 1855, Mingo received attention in the newspaper for being one of “98 persons in the State of New York, who were one hundred years old and upward” in the New York State census, although he was likely closer to 90. He died four years later, on June 7, 1859. Maria followed him two years later, on Aug. 3, 1861. Mingo and Maria were buried in Evergreen Cemetery on Bogert Street in Dresden, near a home owned by their family, and surrounded by many of their children and grandchildren.

Mingo and his wife Maria were born into bondage, but survived being enslaved and displaced, forced to walk to New York from Virginia. Halfway through their lives, they bought land, attended school, raised a family, amassed property, were successful farmers and invaluable early residents of Yates County.