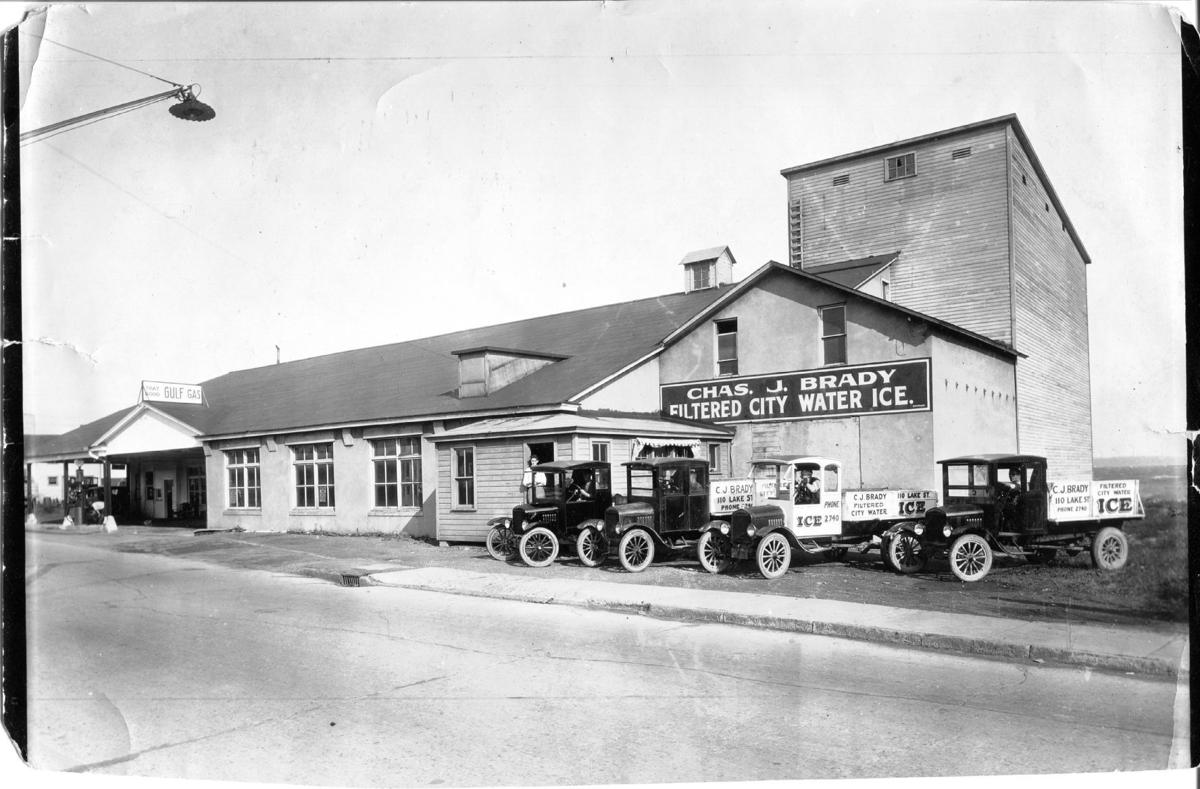 C.J. Brady ran his Filtered City Water Ice Co. from 1921 until 1949. Here is the office on Lake Street in Geneva. Below is a 1903 map showing several ice companies in Geneva. 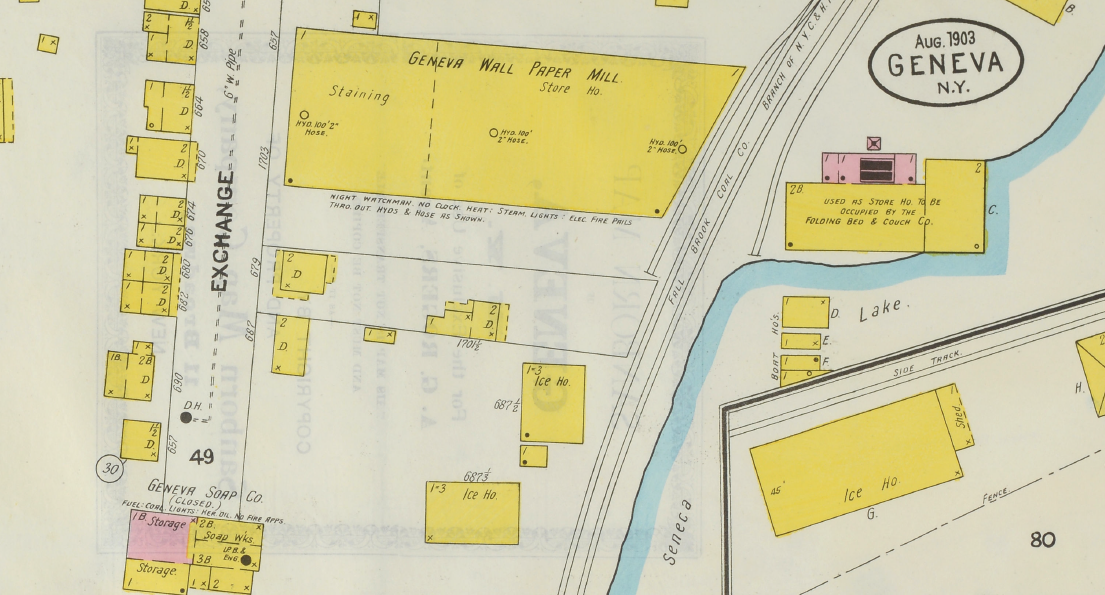 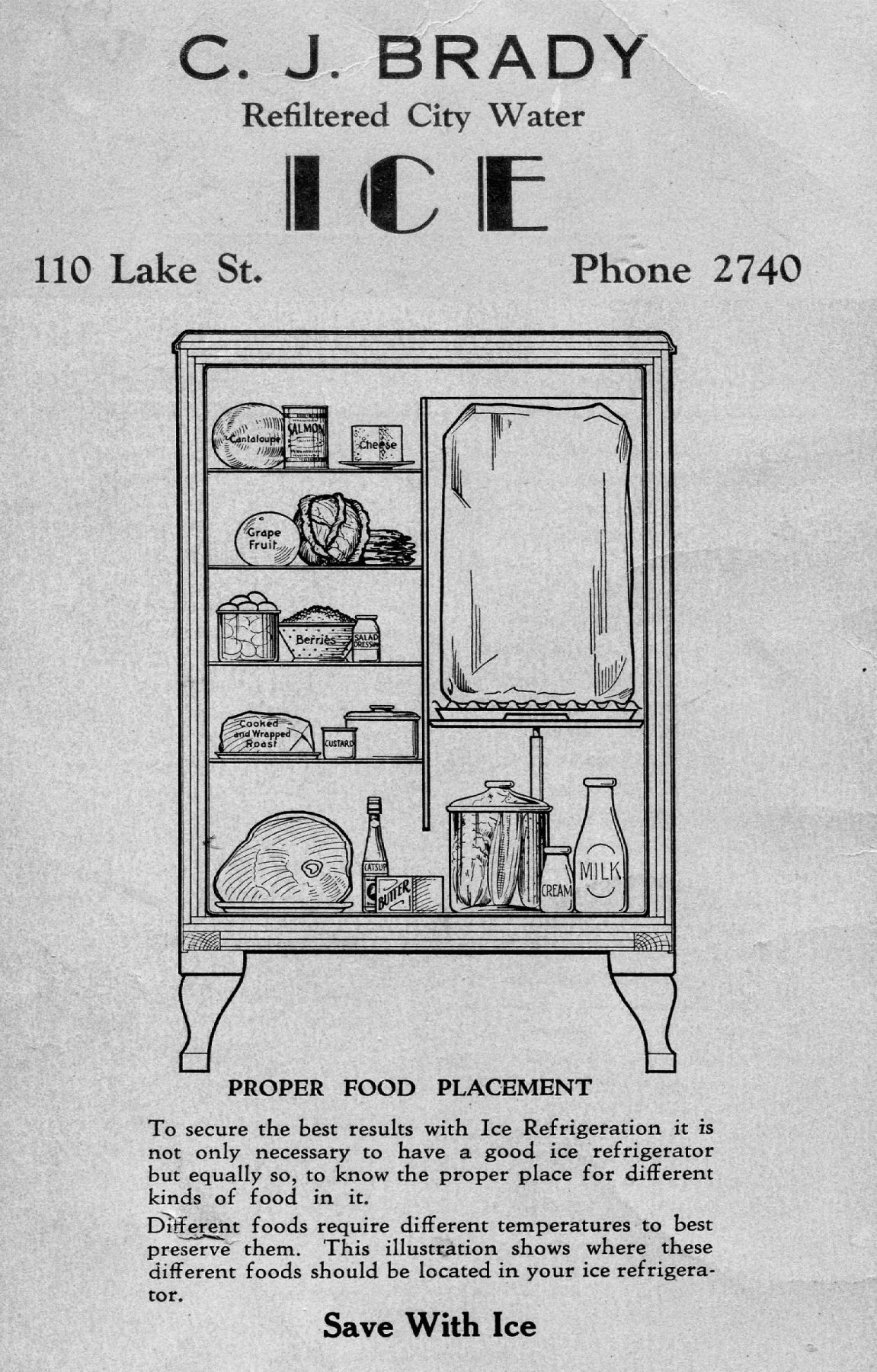 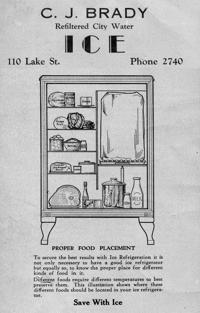 This ad from the C.J. Brady ice company illustrates proper placement of food in a refrigerator.

C.J. Brady ran his Filtered City Water Ice Co. from 1921 until 1949. Here is the office on Lake Street in Geneva. Below is a 1903 map showing several ice companies in Geneva.

This ad from the C.J. Brady ice company illustrates proper placement of food in a refrigerator.

... so declared the Buffalo Courier on March 4, 1905. The start of ice trade, or frozen water trade, began in New England in 1806. Snow and ice storage predates the ice trade by thousands of years, but were only locally sourced and not widespread. In 1806, merchants began selling New England ice in the Caribbean, soon expanding to England, China, India, South America and Australia.

Demand for ice in growing cities on the American East Coast eventually caused the rise of local ice companies, which developed into an expansive industry. With Seneca Lake rarely freezing over, Geneva ice companies would harvest their ice from Keuka and Cayuga lakes and bring them into the city by train. The Geneva Ice Company was the first local ice business, appearing in the 1892 city directory, and sourcing its ice from the Keuka Ice Company which harvested ice from Keuka Lake.

In 1899, the Keuka Ice Company boasted its water to be the purest in New York and the Board of Health inspector agreed: “If Keuka Lake ice was not pure, no natural ice could be obtained in the State of New York that was.”

But just two months later the Geneva Gazette published concerns over the impurities of the lake’s waters with claims that the lake was polluted by sewage which the Keuka company’s manager denied. However, the next year a “big demand for Lake Keuka Ice” meant “night work may be necessary to fill orders.” The quality of that year’s harvest being “far superior to that of most years,” meant the claims of impure waters did not affect consumer demand for ice.

By 1905 there were four ice companies (or distributors) in Geneva, with the Independent Ice Company being the newest to open. This is what prompted the Buffalo Courier to claim an “ice war” in Geneva. Pressures from the Independent and Hygeia ice companies, the Geneva National Bank demanding its loan money back, and its ice house being ordered removed from New York Central Railroad land, the Geneva Ice Company was forced to sell all its properties and close the business in 1907.

With the Hygeia Ice Company closing around the same time as Geneva Ice, it was the Independent Ice Company which would continue to serve Geneva from 1905 to 1935. It weathered the high demand from customers in Geneva, Seneca Falls and Waterloo despite the rocky nature of ice harvesting. Newspaper reports show the ups and downs of being in the ice business, where one is reliant on the weather being cold enough to freeze the lake water enough to provide the tons and tons of ice needed for customers.

The company harvested from Cayuga Lake which could freeze anywhere from 8 to 12 inches thick and where work could come to a standstill because of a February thaw. Newspapers reported the company employed around 100 men per season who would harvest, load the train cars and unload the train cars at the ice houses. Ice houses were centrally located in Geneva around the railway lines to make it easy to unload the thousands of tons of ice right into the storage houses. The Independent Ice Company alone could house 10,000 tons of ice in one house out of a 50,000 ton harvest, costing individuals just $6 per ton or $3 per 1,000 tons.

Ice companies came and went in Geneva; directories list anywhere from three to seven suppliers per year with some of the same businessmen owning the companies. The Independent Ice Company eventually sold its holdings in 1935, but C.J. Brady would take up the slack. Appearing in the 1921 directory for the first time, Brady ran his and other permutations until 1949 when the ice trade would be split in the directory between retail, manufacturing and wholesale entities. Brady even provided a handout with the “proper food placement” for ice refrigeration in order to best preserve food.

The Geneva Refrigerating Corporation would serve Geneva the longest, makes its first appearance in 1923 and listed as an ice dealer until 1960, though it would continue in other markets. With the technological advancement of automatic ice making in the 1950s and 1960s and the rise of the domestic refrigerating machine, the need for buying ice by the ton diminished and by 1971, ice manufacturers and dealers were no longer listed in the directories.

Today, it’s as easy as pouring water into a tray and sticking it into your freezer or tapping a button on the front of your fridge, ready to keep a drink as cold as ice on a hot, hot day.

Chapin is the archivist at the Geneva Historical Society.