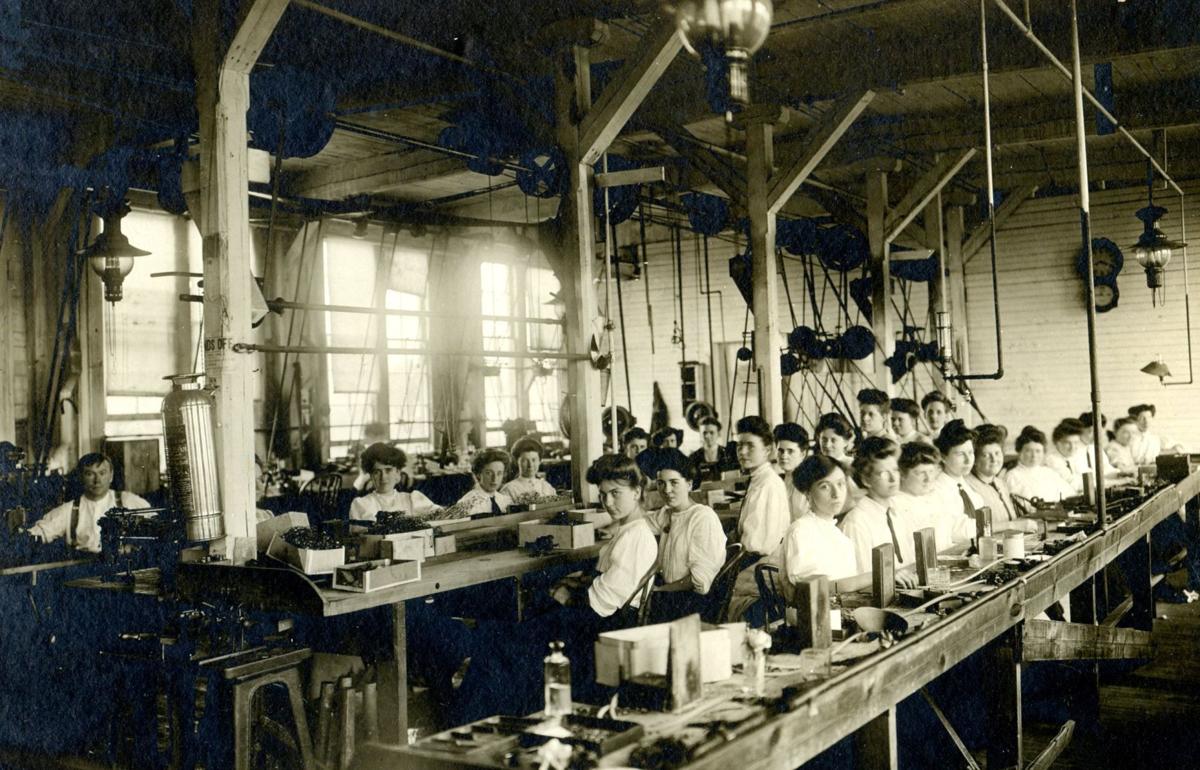 Employees at Standard Optical Co. who worked in the factory’s steel room. 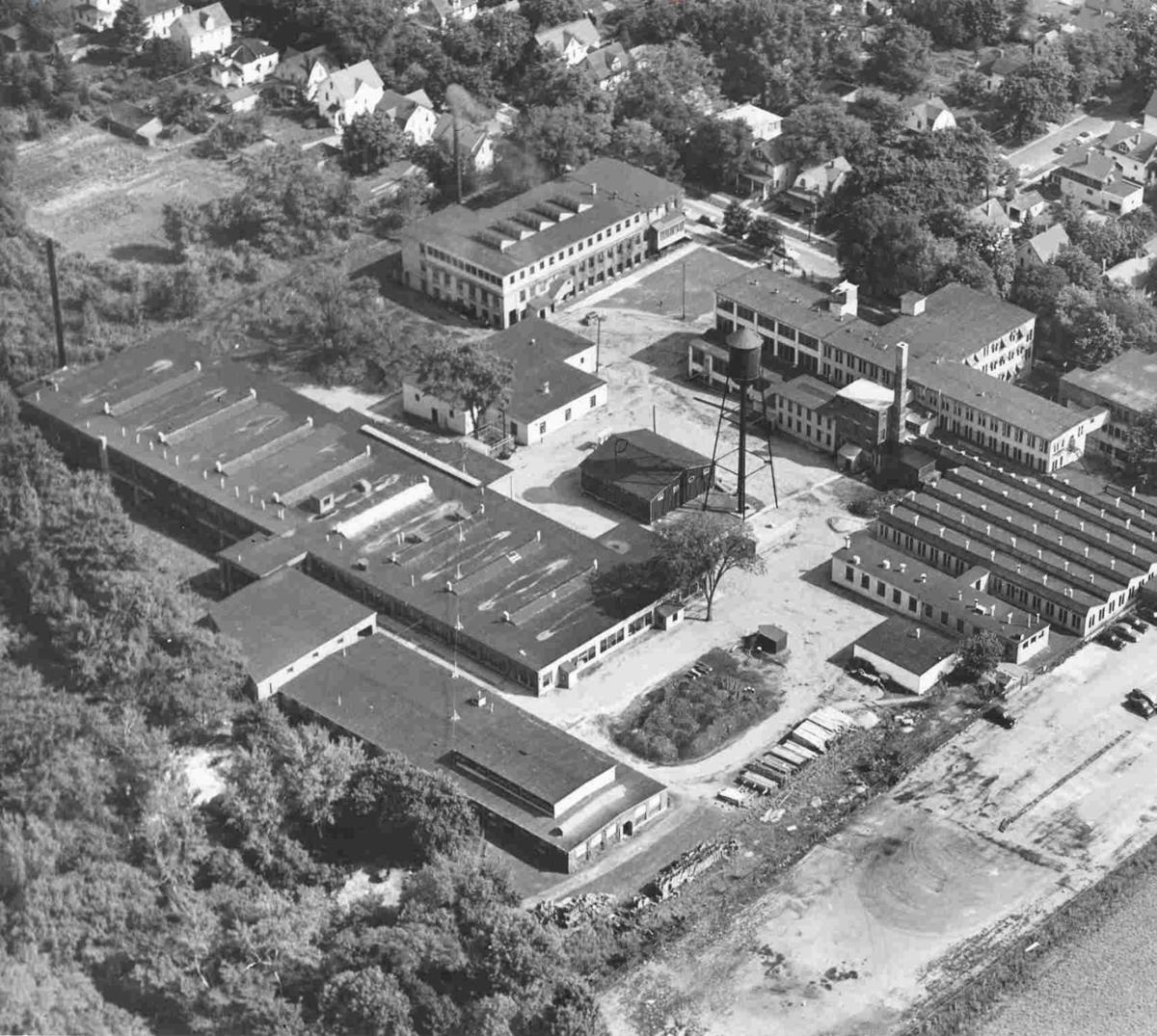 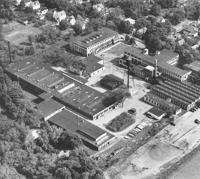 An aerial view of the Shuron Optical factory complex on Lyceum Street in Geneva. 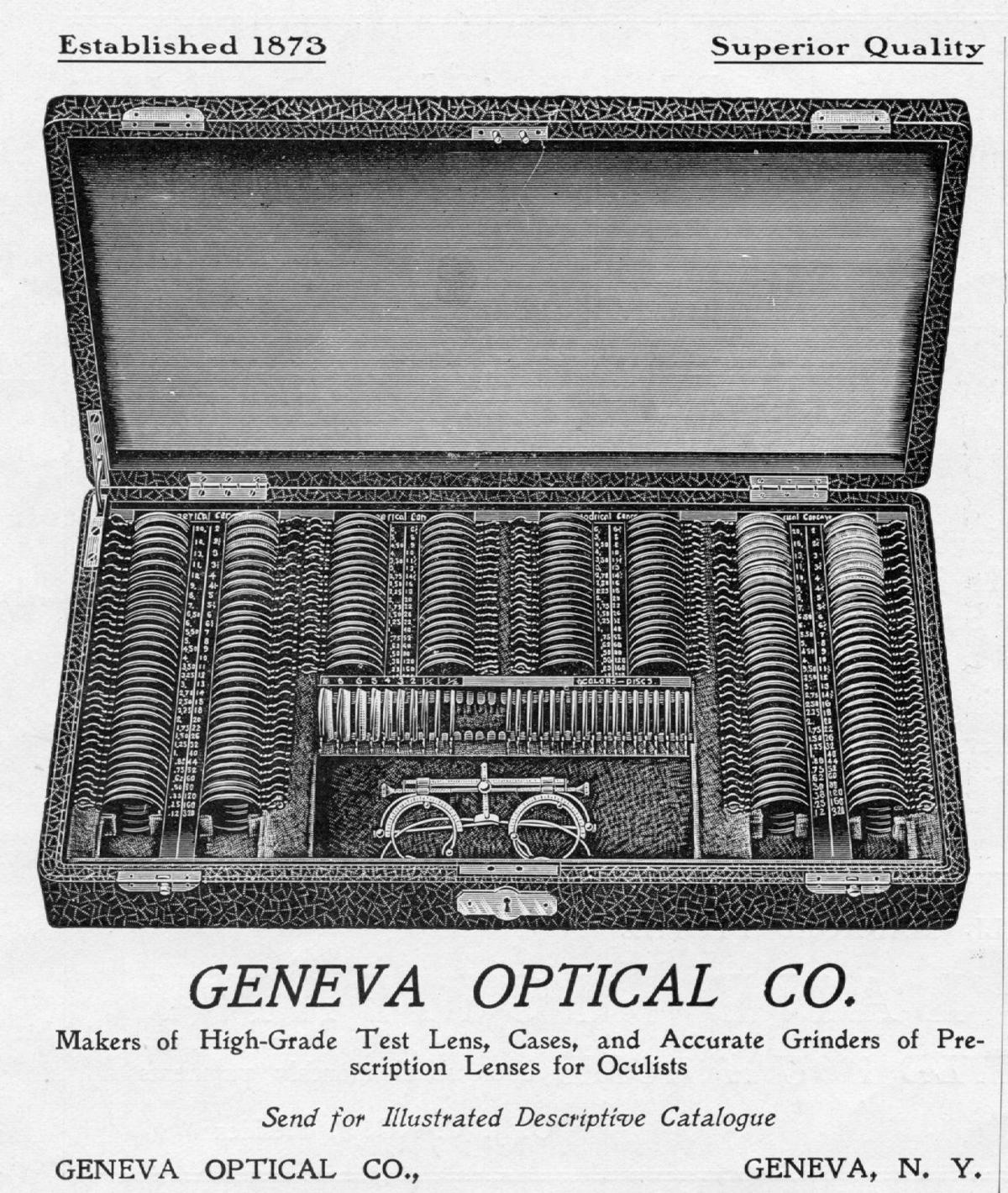 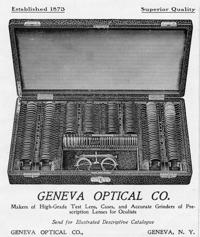 An advertisement for a Geneva Optical Co. trial lens case from a city directory.

Employees at Standard Optical Co. who worked in the factory’s steel room.

An aerial view of the Shuron Optical factory complex on Lyceum Street in Geneva.

An advertisement for a Geneva Optical Co. trial lens case from a city directory.

Can you see what I see?

I’ve been wearing glasses since I was about 7 or 8 years old. I even tried contacts for a very short time — in which I discovered poking my finger into my eye was not all that fun (kudos to all you contact wearers for being able to do that). Optical lenses were produced right here in Geneva for decades, and it was considered a profitable industry.

The Geneva Optical Co. was originally established in 1873 by Andrew L. Smith as the AL Smith & Co. Spectacle Manufacturers. Smith opened his offices on Linden Street and mostly sold goods from his hometown of Southbridge, Mass.

Two years later, he joined with Joshua Maxwell, William Hall, Phineas Prouty Jr., Corydon Wheat, and William H. Smith to incorporate the Geneva Optical Co. for the “manufacture, buying and selling of spectacles and other optical goods and merchandise pertaining thereto.” Geneva Optical was said to be the first in the country to manufacture trial lens cases at a time when fitting eyeglasses was a trial-and-error system, meaning opticians needed to carry several different types of glasses for their patients to try.

In 1882, E. Merritt Cole came from Southbridge to investigate the optical business in Geneva; as a result, he formed the limited corporation Standard Optical Works in 1883. His stockholders included names such as Alexander Lafayette Chew, Corydon Wheat, and Phineas Prouty. Cole was one of the leading optical goods makers in the country and an expert mechanic and draughtsman. He started making lenses in the same building complex as Geneva Optical.

Unfortunately, Cole suffered from ill health and would move out of state to recover in 1888 — leaving his business to William Bowker, who had followed him from Southbridge. Around this time, an agreement was made between Geneva Optical and Standard Optical for the former to become the wholesale distributor of the latter’s goods, although the exact date is not written in the paperwork.

Business grew so much that by 1892 the manufacturing works was moved to Lyceum Street, where machinery was increased by the dozens. In the same year, Geneva Optical’s directors agreed to sell to James E. Brown and Theodore J. Smith their “name, good will, and retail business,” which included all items in the Linden Street office and any items bearing the name Geneva Optical Co. This may have been done to formally separate the retail business from the manufacturing business.

The Standard Optical Co. was incorporated in 1896 with most of the above named stockholders. It continued manufacturing eyeglasses and spectacle wares in all metals, as well as machinery used by oculists and optometrists in connection with the making of glasses. By 1912, the company employed more than 500 men and women — practically all of whom were skilled artisans and mechanics — in addition to distributing its products all across the globe.

Organized in 1909 by Standard Optical and the Pennsylvania Optical Co. of Reading, Pa., the United States Lens Co. occupied the same factory on Lyceum Street where it took over the lens grinding plant. Its main concern was the production of lenses, together with designing and constructing new and improved machinery. Standard Optical would distribute its products until 1924, when it would take over United States Lens Co.

Geneva Optical would continue as wholesale distributors of optical goods even after Standard Optical was consolidated with Shur-On Optical, DuPaul-Young Optical Corp of Southbridge, Mass., and General Optical Co. of Mount Vernon (N.Y.) in 1925. Known as the Shur-On Standard Optical Co., the company continued manufacturing operations in the Lyceum Street factory; eventually its name would shorten to Shur-On Optical Co. At its height, the company employed more than 800 workers.

In the late 1950s, the company was sold a few times until Textron purchased it. Textron eventually announced the lens-making department would be moving to South Carolina, and by 1969 the company had departed Geneva completely. In 1974, the buildings on Lyceum were demolished.

Various other optical companies would come and go.

John Spengler, once an employee of Standard Optical, established his private practice in 1899, first specializing in ear, nose and throat care before dedicating his attention to ophthalmology. He was nationally known for his pioneering work in the field, including making black-and-white photographs of the interior of the eye and taking photos of the living eye in natural colors in 1928. He also ran the Spengler Optical Co., making and selling optical lenses for opera glasses, binoculars, reading glasses, microscopes, invisible bifocals, and barometers.

Harold J. Stead was inspired by his brother Ernest to enter the optical works field. He started as an errand boy and apprentice at Geneva Optical in 1900, then transitioned to a lens surface grinder at Standard Optical for a short while before setting out on his own, getting into business with his brother, becoming a salesman for other optical companies, and traveling to other optical works across the states.

Stead details his journey back to Geneva in “The First Fifty Years of an Optical Career,” at which time he starts his own business on Linden Street in 1916, adjacent to the property originally occupied by the AL Smith Co. He offered Steadfast bifocal lenses among other services.

Eventually, Stead ended up at Shuron-Standard in May 1928, where he became a leader in the prescription technician field, a trainer for the Shuron Geneva plant and wrote the newsletter “Shuron Shopman.”

Andrew Smith, E. Merritt Cole, William Bowker, and Harold Stead all held patents in several eye-glass related improvements. Smith and Cole held several on their own and even applied for one with Bowker together in 1886.

Chapin is the archivist at Historic Geneva.