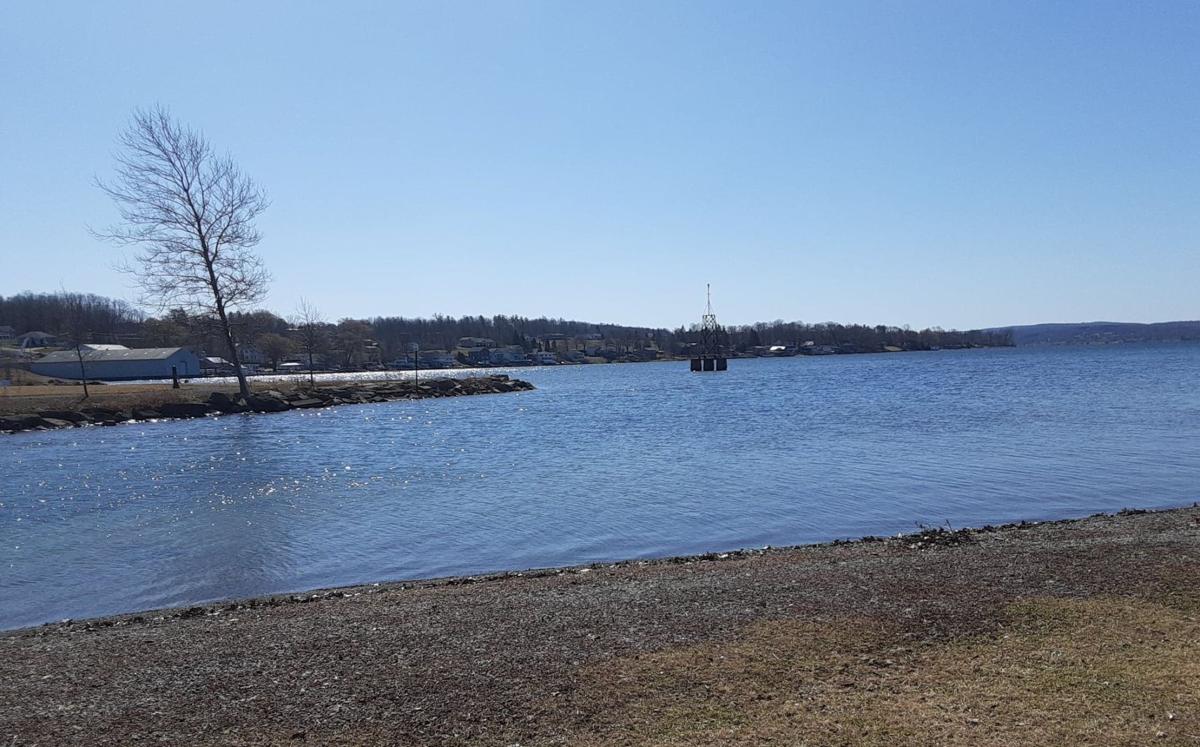 The western side The Outlet at the foot of Keuka Lake in Penn Yan. 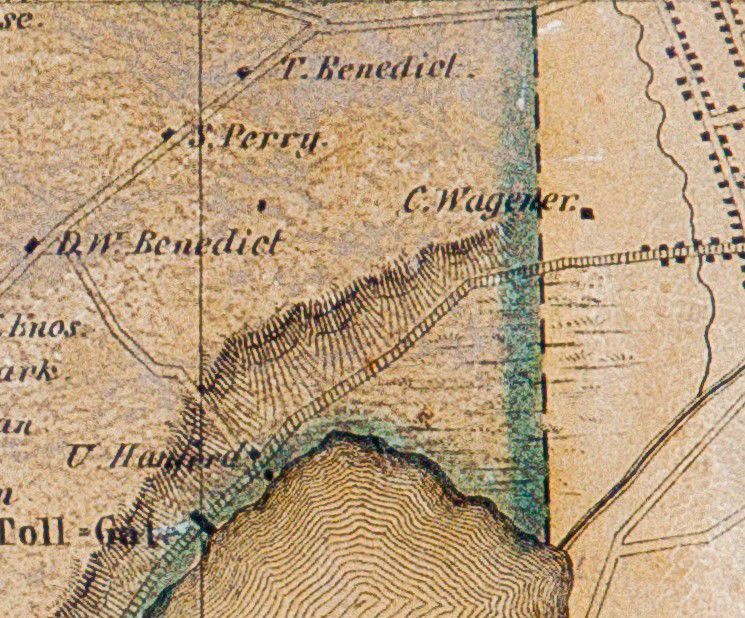 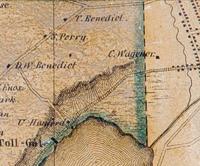 A map showing the western side of The Outlet and Plank Road. 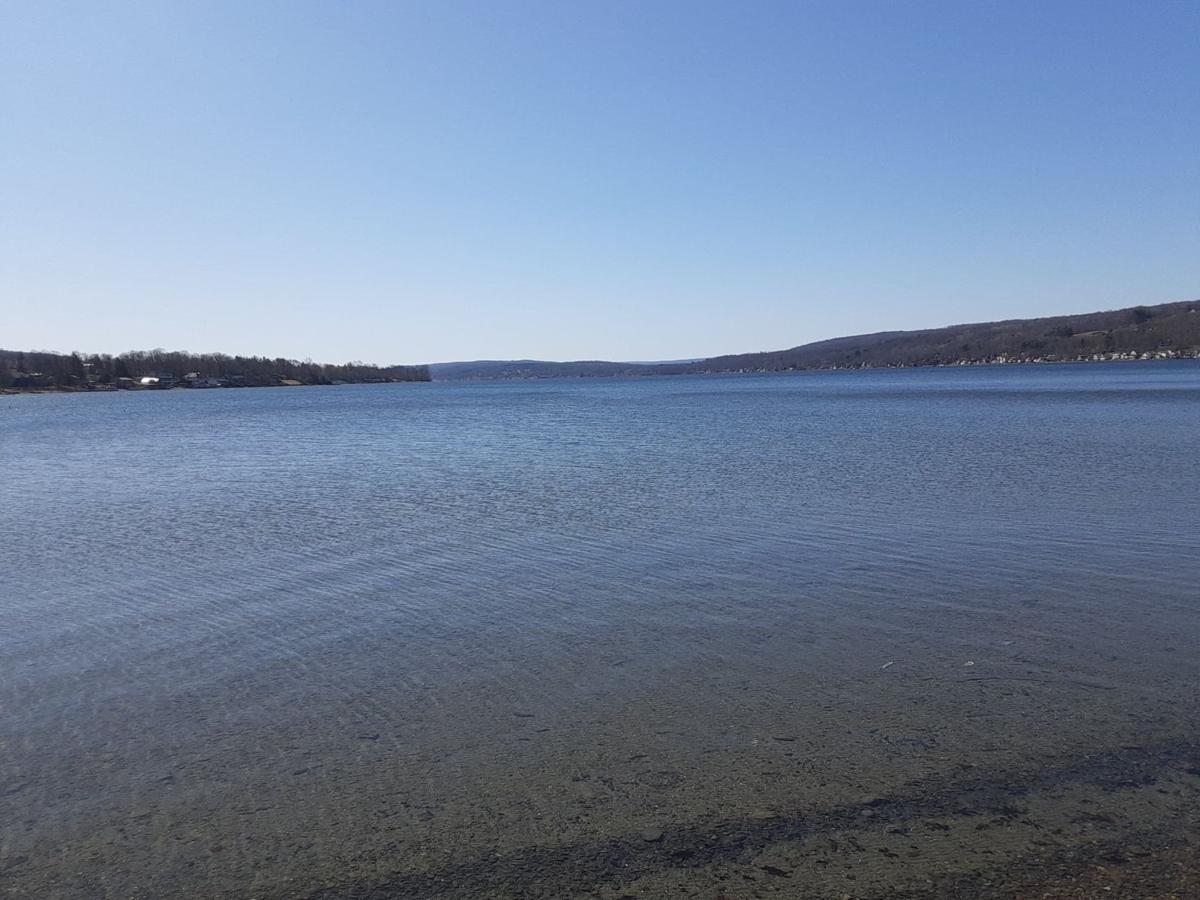 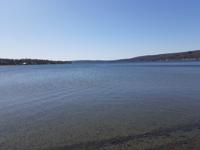 The foot of Keuka Lake from Indian Pines Park.

The western side The Outlet at the foot of Keuka Lake in Penn Yan.

A map showing the western side of The Outlet and Plank Road.

The foot of Keuka Lake from Indian Pines Park.

Today, the location in Penn Yan where the Keuka Outlet flows from the foot of Keuka Lake is framed by a pair of parks. Indian Pines Park is situated on the west side of the Outlet and Red Jacket Park sits on the east.

These public spaces provide an extraordinary vista of the east branch of Keuka as it runs alongside the Bluff. They are favorite places to swim, enjoy the view, or have picnics. It is understandable that in the early days of non-native settlement, several early residents planned to create communities along the Outlet. Any village there would enjoy fertile soil, ample hunting, effortless transportation of goods down the Outlet to Seneca Lake communities and easy access to water travel in a time when roads were non-existent or barely usable.

The followers of the Public Universal Friend chose to settle on the western side of Seneca Lake, but it wasn’t long before the areas around the Outlet were snapped up by other new residents flooding into the area. Abraham Wagener, whose parents came from Pennsylvania with the Friend, purchased the land along the entrance to the Outlet on the eastern side. (Wagener founded the Village of Penn Yan in 1799, inherited land from his father and eagerly bought up large amounts of surrounding tracts.)

Meanwhile, on the western side of the Outlet, things took a more unusual turn. A Jacob Fredenburg, fleeing Shays’ Rebellion in Massachusetts in 1787, took shelter in present-day Yates County among the Seneca. Fredenburg claimed the Seneca informed him there was a large amount of gold and treasure buried along the western edge of the Outlet at the foot of the lake. He said they told him the gold was from the North and had been brought and buried by a detachment of French soldiers, who had stopped and camped with the Seneca en route to Fort Duquesne during the French and Indian War in the 1750s.

Fredenburg also claimed to have met an elderly French man living in the pines there at the confluence of the Outlet and lake; he assumed the man was one of the original French party, and he incidentally owned a strange old map. Was it a map to the gold? Fredenburg could never find out, as he stated that the man would not communicate with him. Fredenburg returned to Massachusetts for three years. When he returned to the area, the Frenchman — and his treasure map — were gone.

A buried treasure story that lives on

As other non-native settlers trickled into the area in the 1790s, Fredenburg and his son John repeated the story of buried treasure many times. The rumors of buried treasure lent a mysterious air to the western edge of the Outlet, which became known to many in the area as “The Pines” or “Indian Pines,” after the large number of Seneca artifacts found there. Many notable early Yates County residents, including Abraham Wagener’s father David, took part in digging for the buried treasure. A Mrs. Heltibidal used a divining stone and claimed to know where the valuables were buried, directing diggers all over the Outlet’s western side. They came back empty handed after each excavation.

The diggers claimed when they would get close to reaching the treasure, they would be chased off by “angry ghosts” and other bizarre visions. Two groups of men claimed to witness a large, animal-like phantom the size of a calf near them as they dug, frightening one so badly that he jumped into his canoe and rowed off down the lake. Although the idea of buried treasure was alluring to many, the western edge also developed a reputation for being haunted.

Oddly, the great hunt for treasure coincided with a regional trend for supernatural treasure digging. A strangely similar situation happened some years later in the area between Rose and Wolcott in Wayne County, where the “money diggers” used a medium to guide them to chests of buried gold, claiming that when they got close, evil spirits would chase them away. Neither the Wayne County nor Yates County diggers ever found gold.

Undeterred by tales of strange creatures of disappearing gold, a Gen. William Wall purchased the land along the western side in 1803. He began planning a new village on the site, which does not appear to have been named. Wall went as far as to survey streets and lots for the settlement. He died abruptly in 1804, and that land, too, was obtained by Abraham Wagener. Perhaps because he had already planned a village on the opposite side, as well as having already founded Penn Yan just down the road, Wagener chose not to pursue Wall’s dream of a community in The Pines. (Although the early area residents did not find gold or treasure, they did find evidence of a fairly large Seneca settlement, long gone. Countless arrowheads, scrapers, sinker stones for fishing and even ancient hatchet heads hewn out of stone were located along the beachfront. Spots were located that had evidently long been used for fires. One early inhabitant in The Pines even used a long stone as a peg in his barn, which was judged to have been a Native American pestle and was removed to the collection of L. Jerome Ogden.)

After Wall’s death, Wagener chose not to build a settlement, but instead passed the land down to his daughter Mary, who married Uriah Hanford on June 21, 1824. Hanford was a merchant originally from Unadilla, Otsego County. The young couple lived in Penn Yan until a large, Greek Revival-style home was completed on Mary’s land in The Pines around 1827. A plank road with a toll gate, now Route 54A, was built through the property. The house is still standing. The Hanford estate included the house, acreage around it, down to the lake and Outlet edge, a large marsh still extant a short distance from the Outlet and a cold, clear spring on the beach area. Their daughter Mary Eastman inherited the house, and in the early 20th century the house and surrounding land was sold numerous times. In the 1920s, Merrill Beach sold the home to the Lone Pine Club and the rest to a real estate development company from Rochester. That company in turn sold it to the Finger Lakes Land Company, whose president Paul Ritchie lent his name to the main street passing through the area.

The land was divided into 70 lots and advertised for sale in 1925, as “overlooking the lake but not touching on it.” Streets were carved through and both lake cottages and year-round homes built on the lake side and the marsh side. The land bordering the western edge of the Outlet and the adjacent foot of the lake was left as the park mentioned earlier. Today Indian Pines Park provides enjoyment for people all over the region, without a hint of its strange and storied past.