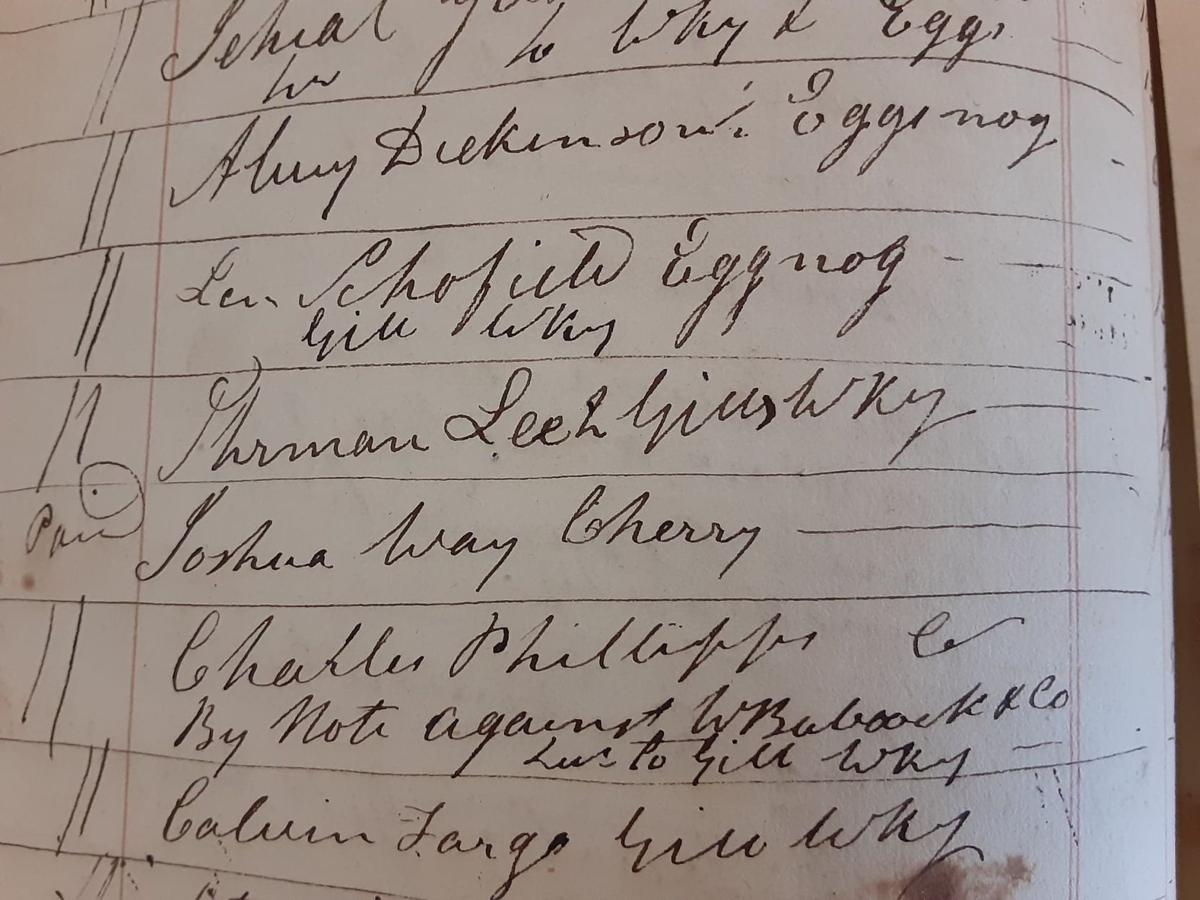 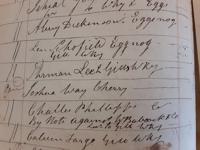 Major Asa Cole kept meticulous records related to his Penn Yan tavern, and this sheet shows that eggnog was ordered in May 1817. This stronger version of eggnog was enjoyed year-round in the early 19th century. 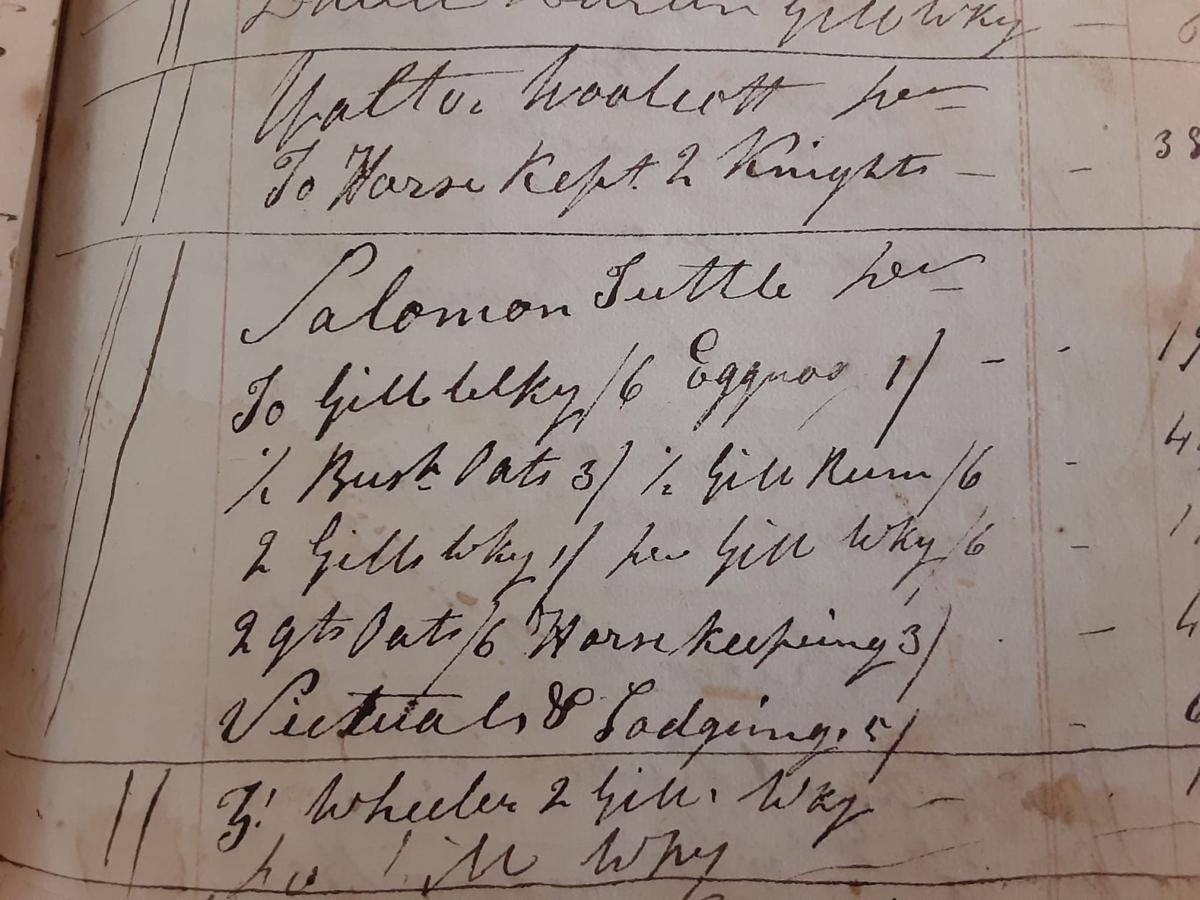 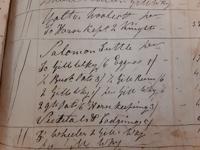 The tavern was more than a place to drink in the 1800s. Major Asa Cole’s records (with references to oats, horsekeeping, lodging and “victuals”) show that his establishment was also used by travelers.

Major Asa Cole kept meticulous records related to his Penn Yan tavern, and this sheet shows that eggnog was ordered in May 1817. This stronger version of eggnog was enjoyed year-round in the early 19th century.

The tavern was more than a place to drink in the 1800s. Major Asa Cole’s records (with references to oats, horsekeeping, lodging and “victuals”) show that his establishment was also used by travelers.

In normal, non-pandemic years, people all over the world celebrate the New Year by attending parties or crowding into bars and restaurants.

Although early residents of the Finger Lakes didn’t have bars as we know them today, they relied heavily on the tavern. The tavern was an institution in most communities, either in crowded urban neighborhoods or thinly populated frontiers. Although many today think of taverns as merely a place to drink, they served a much more important purpose — especially in places like the Finger Lakes, where in early days a person could go weeks without seeing someone outside their household. Many isolated homes obtained tavern licenses, granted by the county, to supplement their incomes.

Most importantly, taverns provided “entertainment” in the original sense of the word — food and lodging. This was especially important as people moved into the region in the late 18th and early 19th centuries. Taverns were also stage route stops, and would put up and feed horses for those traveling long distances. They provided space for dances and parties, hosted auctions, and some even served as the site for church meetings, government business and courts of law before buildings dedicated for those purposes were built. Some even had tiny stores and functioned as post offices, collecting letters brought by stagecoaches and holding them for pickup. Like bars and restaurants today, taverns ranged from comfortable, elegant places with excellent food, to rough places to escape the cold that provided basic necessities, if that. Some were inviting places, while others were the sites of brawls and fights.

The taverns of Yates County were no different. They ranged from isolated, basic homes such as the log cabin tavern built in 1806 by John Carr of Barrington, which featured rifle slits for defense in the upper floor walls, to the spacious, well-appointed Larzelere Tavern built in 1826 near Branchport. Most were somewhere in between these two extremes.

So important was the tavern run by Giles Kinney that the little settlement where it was located took the name Kinney’s Corners. Early residents of Dundee relied on the Harpending Tavern and the residents of Jerusalem met at Stephen Haven’s. Also in Jerusalem, Zephenia Briggs ran a tavern given to drunkenness and fist fights, for which he was removed from the Free Will Baptist Church. Penn Yan had a tavern as early as 1795, when Dr. John Dorman built his, known as the Red House. Other prominent inns in Penn Yan were the Hoyt Tavern, run in an 1824 house on Main Street, now the site of the Oliver House. The Wesleyan Methodists, having split from the Methodist Church, met in a room there until their church was built on the corner of Main and Court streets.

But perhaps the busiest and most impressive tavern in Penn Yan was run by Major Asa Cole at the northwest corner of Main Street and North Avenue. Cole started his business in 1811 and kept meticulous records, now housed at the Yates County History Center. He stabled and fed horses, boarded and fed travelers and locals alike, hosted dinners and balls and served many, many drinks. It was the meeting place of the court before the courthouse was completed and the Yates County Medical Society chose the Cole Tavern as its meeting place.

A look through Cole’s ledgers shows that whiskey and rum were the most popular drinks of the day, with brandy, cider and rum sling (consisting of rum, sugar, water and nutmeg) showing up occasionally. Drinks were usually ordered by the gill, or about half a cup. Eggnog was consumed all year, not just during the winter holidays, with Levi Schofield and Abner Dickinson ordering it in May of 1817. Eggnog at this time was very strong, combining sherry, rum, whiskey and brandy with eggs, cream, milk and sugar. Schofield followed his eggnog up with a gill of whiskey. John Grand and William Claton chose to ring in the new year in January 1817 with cider (hard, of course). Cider and applejack were also commonly consumed in New York state, due to our abundance of apples. Some customers ordered large amounts, one even purchasing seven gills of whiskey in one evening.

Although from the amounts of alcohol sold at the Cole Tavern it would appear to be a rowdy place, the amounts people were consuming there were not unusual for the time. Americans drank an enormous amount of liquor in the late 18th and early 19th centuries, reaching a peak in 1820 — when an average of five gallons of distilled liquor was consumed per person (in 2010, Americans consumed 1.5 gallons per person).

In addition, western New York led the nation in distilling, with much of it being purchased here. (That is not to say it may not have gotten boisterous occasionally at Cole’s. Silvanius Schofield was charged 25 cents for breaking a glass and a customer named Oldfield somehow managed to break four pipes.) Most taverns purchased their liquor directly from distillers, although some distillers sold smaller amounts directly to customers, who may not have lived close enough to a tavern to buy alcohol frequently. (In 1809, John Lawrence of the Town of Snell, now the Town of Benton, decided to make his occupation as a distiller more lucrative by applying for a license to sell smaller amounts of alcohol. The off-premises license allowed him to sell “any Strong or Spiritous liquors under five Gallons provided the same be not Drank in any House Yard or Garden of the said John Lawrence …” That five gallons was considered a small amount shows that tavern keepers must have purchased enormous quantities.)

Asa Cole’s establishment provided much more than eggnog and rum sling, though. One customer went there in 1824 to purchase sugar (and rum!) for his wife. Another paid to board his horse, lodge and eat “victuals” there. Taverns also provided much needed entertainment for rural people. A description of a ball held at a Kashong tavern around 1803 proves that socializing was vital for people who were isolated and worked long, hard hours. A spinning bee was held with skeins of flax issued to girls several miles around as invitations. The girls came “out of the woods,” carrying their best dresses and changed into them there at the tavern. People came from as far away as Geneva on difficult roads to enjoy the dance. As dawn broke, the partiers put their work clothes back on and retreated to their homes in the woods.