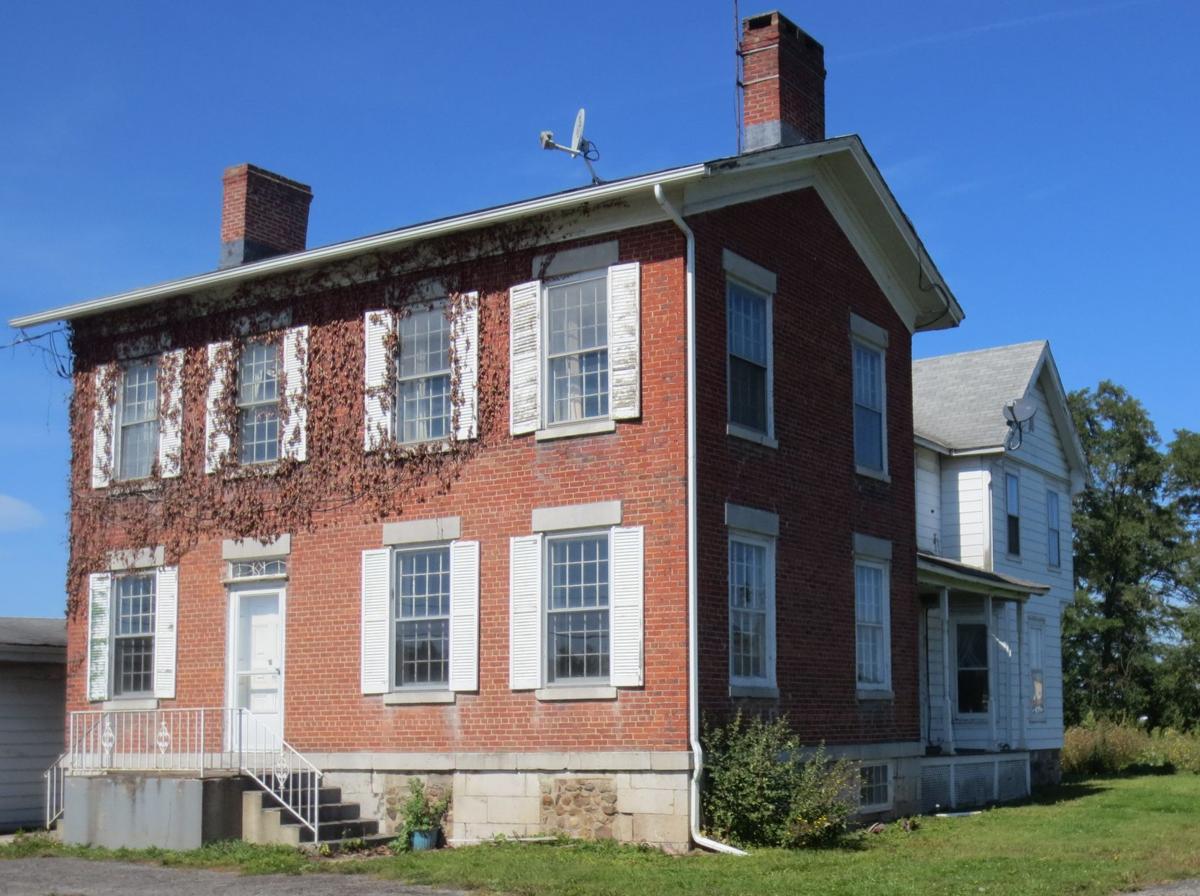 This house at the corner of Routes 318 and 414 in Tyre will become the new home of the Seneca County Chamber of Commerce. 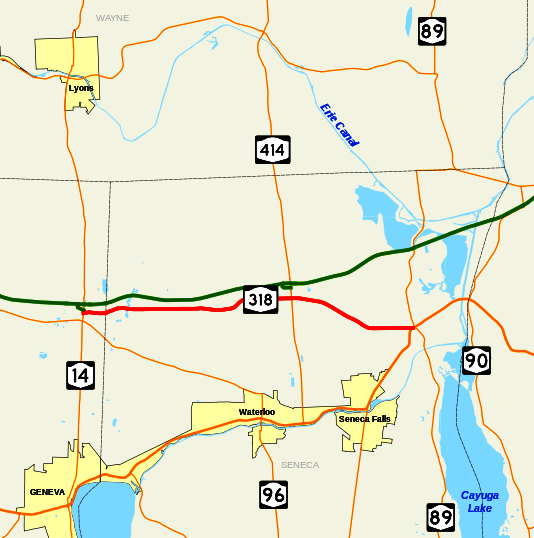 Route 318 runs in an east-west direction parallel to the Thruway. 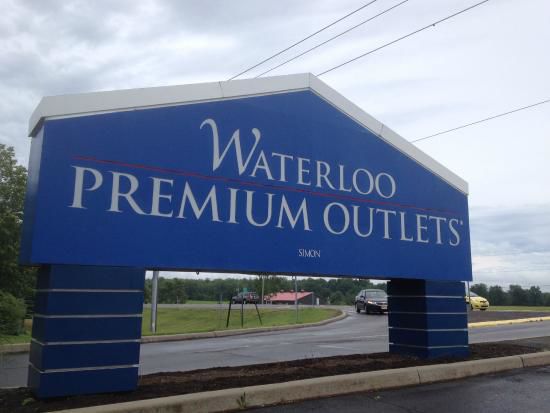 Waterloo Premium Outlets on Route 318 in the town of Junius has been a big factor in the growth of the state roadway.

This house at the corner of Routes 318 and 414 in Tyre will become the new home of the Seneca County Chamber of Commerce.

Route 318 runs in an east-west direction parallel to the Thruway.

Waterloo Premium Outlets on Route 318 in the town of Junius has been a big factor in the growth of the state roadway.

If you want to get to the Waterloo Premium Outlets, you access the stores from Route 318. Known by locals for many years as the Old State Road, it used to be a poorly maintained road that drivers avoided if they could. Route 318 has been transformed in recent years to become — especially at its intersection with Route 414 — the prime economic development area in Seneca County.

Route 318 is an east-west highway between Route 14 in the town of Phelps, Routes 5&20 and Route 89. The road is approximately 10.9 miles long. Route 318 begins in the west at an intersection with Route 14 in an area of the Ontario County town of Phelps known as West Junius. West of this intersection, the right-of-way for Route 318 leads to the toll barrier for New York State Thruway (I-90) exit 42. The route heads eastward, crossing the Norfolk Southern Railway Corning Secondary line before passing into Seneca County about 0.7 mile east.

In the Seneca County town of Junius, Route 318 follows an alignment parallel to the Thruway, passing by a series of small lakes collectively known as Junius Ponds. Just past an intersection with Nine Foot Road (County Road 108 or CR 108), it passes Waterloo Premium Outlets. Soon thereafter, it passes between a series of homes at Stone Church Road and leads into the town of Tyre. Continuing east it passes through the hamlet of Magee at the intersection with Route 414. Further east it intersects with Gravel Road (CR 101) at Nichols Corners. A little more than 1.3 miles east, Route 318 intersects with Routes 5&20 and Route 89 at Halsey’s Corners, just west of the Montezuma National Wildlife Refuge and northwest of Cayuga Lake.

The origins of Route 318 date back to the 19th century when the highway was part of a road connecting the village of Phelps to a bridge over the Seneca River near Cayuga Lake. In 1825, the state Legislature authorized the construction of a “free bridge” over the Seneca River. A road was later built to connect the bridge to the village of Phelps by way of West Junius and Magee. The highway became known as the “free bridge state road.”

In 1908, the portion of the road from the free bridge to Halsey Corners was included as part of Route 6, an unsigned legislative route defined by the state Legislature as beginning in Buffalo and ending in Albany. The remainder of the old free bridge highway was designated as Route 6-a in 1911. The section of Route 6-a from West Junius to Halsey Corners (the junction with present Route 89) was designated as Route 291 (west of Magee) and part of Route 89 (east of Magee) as part of the 1930 renumbering of state highways in New York. The name New York 291 for present Route 318 was removed in the 1940s.

When the first set of posted routes in New York was assigned in 1924, the portion of Route 6-a from Phelps to West Junius was incorporated into Route 15 (modern-day Route 96), a route extending from Owego to Rochester. Farther east, the Route 6 segment of the old free bridge road was co-designated as part of Route 5 and Route 5A (now U.S. Route 20 and New York Route 5), two cross-state highways linking Western New York to the Capital District. The remainder of the old highway — namely Route 6-a from West Junius to Halsey’s Corners — did not initially receive a designation.

The entirety of old Route 6-a between West Junius and Halsey’s Corners was assigned a designation as part of the 1930 renumbering of state highways in New York. From West Junius to Magee, the highway was designated as New York 291. The section from Magee to Halsey Corners became part of Route 89, which originally continued north from Magee to North Rose on what is now Route 414. At the same time, Black Brook Road — a connector between the village of Seneca Falls and Route 89 east of Magee — was named New York 390A. The route was a spur route of New York 390 in name only, as New York 390A never connected to New York 390. The New York 291 designation was deleted in the early 1940s.

The alignments of Routes 89 and 414 north of Routes 5&20 were mostly swapped in the late 1950s. Route 414, however, continued south of Magee along its current alignment. At the same time, Route 390 was extended westward to Magee, along the former routing of Route 89, while the Route 390A designation was deleted. The entirety of Route 89’s former routing from Magee to Halsey Corners was redesignated as Route 318 in about 1963, resulting in the truncation of Route 390 back to its previous northern terminus, before being removed altogether in the mid-1960s. Route 318 was extended west to its current terminus at Route 14 in West Junius in the mid-1970s. The former routings of Routes 390 and 390A between Route 318 and the Seneca Falls village line are now maintained by Seneca County CR 102 (Black Brook Road) and part of CR 101 (Gravel Road).

The future for Route 318 is bright. The success of Waterloo Premium Outlets has begun what many foresee as many new businesses along the Routes 318 corridor, especially near the intersection with Route 414 at Magee’s Corner, with easy connection to both Thruway exits 41 and 42. The new sewer service, coupled with the water line in operation for several years, together provide great infrastructure for the location of new businesses. The new del Lago Resort & Casino may prove to be a big economic stimulus for the area. It is not surprising that the Seneca County Chamber of Commerce has chosen to relocate in the near future to the former Dr. Thomas C. Magee house at the northwest corner of Routes 318 and 414. What was once a poorly maintained road, Route 318 may well become one of the most traveled roads in Seneca County.