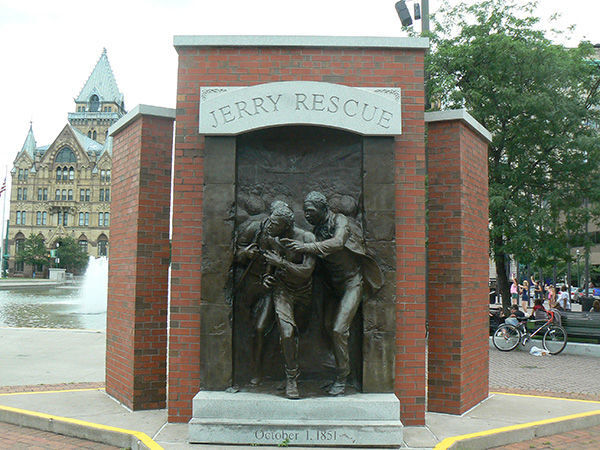 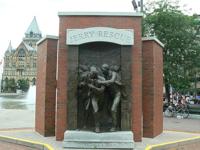 The Jerry Rescue Monument in Syracuse’s Clinton Square was erected in 1990. 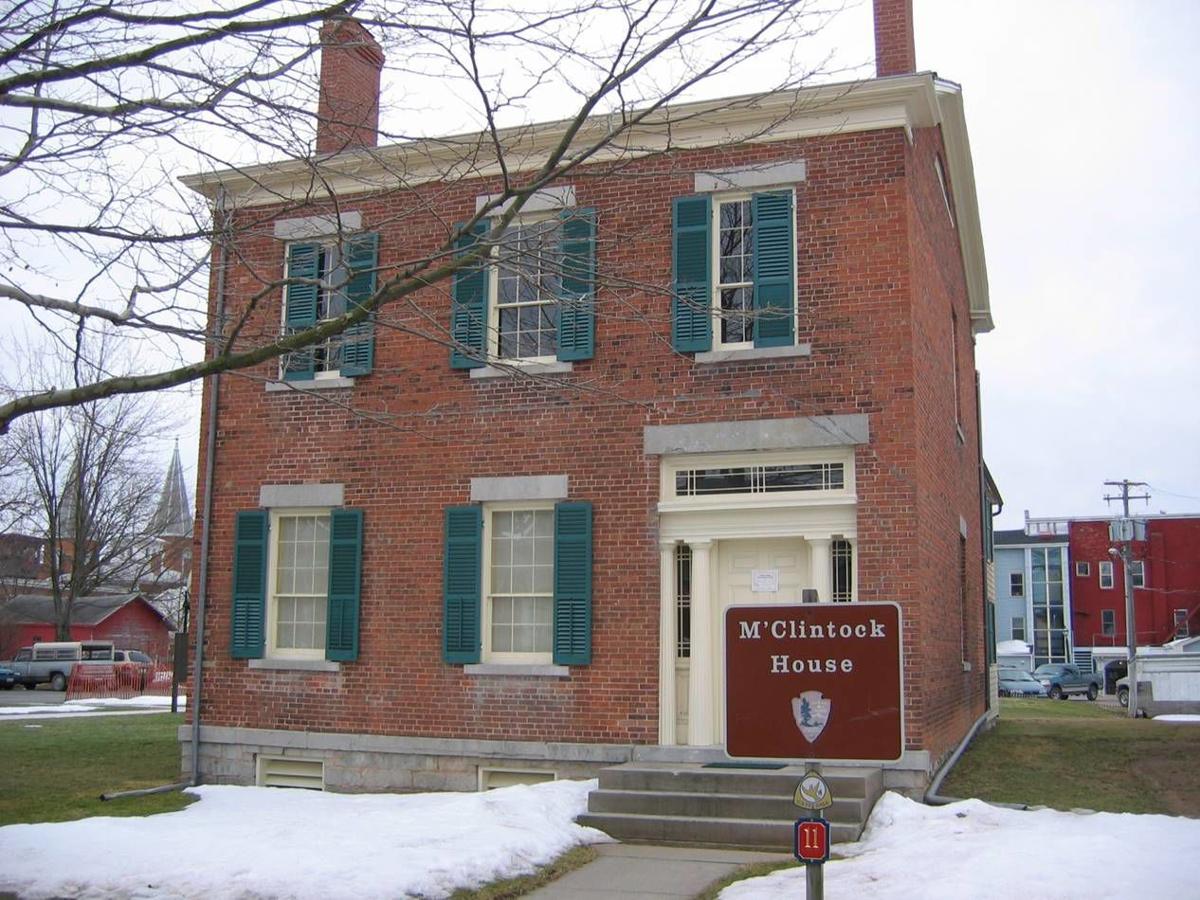 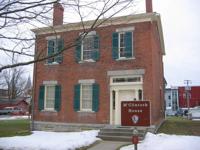 The Rev. Jermain Wesley Loguen spent a night at the M’Clintock House in Waterloo while fleeing to Canada following the fallout of the 1851 Jerry Rescue in Syracuse.

The Jerry Rescue Monument in Syracuse’s Clinton Square was erected in 1990.

The Rev. Jermain Wesley Loguen spent a night at the M’Clintock House in Waterloo while fleeing to Canada following the fallout of the 1851 Jerry Rescue in Syracuse.

As a social studies department head for several years, I suggested to all department teachers that they try to make a local connection to whatever they were teaching.

As Seneca County historian, I have been learning many more ways to do just that.

While reading Robert Searing’s article about Syracuse’s famous “Jerry Rescue” — an important event in Underground Railroad history — in the Saturday, Oct. 2, 2021 issue of the Syracuse Post-Standard, I realized that an important piece in the “rest of the story” to that event happened in the M’Clintock House in Waterloo. Using information from Searing’s article and information in our 2006 report “Discovering the Underground Railroad, Abolitionism and African American Life in Seneca County, New York, 1820-1880,” along with other sources, let me explain this Seneca County connection.

First, I need to discuss the Jerry Rescue. William “Jerry” Henry had escaped his enslavement in Missouri and, around 1850 (possibly as early as 1843), settled in Syracuse, where he worked in Morrell’s cooperage near Hanover Square. As part of the “Compromise of 1850” a strong Fugitive Slave Act was passed by Congress. This act expanded the ability of slave owners to recover runaway slaves (today we call then “freedom seekers”) by allowing federal marshals to deputize local residents to help round up a suspected fugitive slave; the act also deprived the suspected fugitive slave of a trial by jury.

Many Syracuse residents became so outraged by the Fugitive Slave Act that a 13-member biracial “vigilance committee” was formed to help any “freedom seeker” in need in Syracuse. One of the committee members was the Rev. Jermain Wesley Loguen, himself a “freedom seeker” and well-known “station master” on the Underground Railroad. On Oct. 1, 1851, “Jerry” was arrested at work. That night members of the Syracuse “vigilance committee,” with a reported crowd of 3,000 people also present, rescued William “Jerry” Henry from a jail cell in Clinton Square.

“Jerry” was helped to get to Canada — where slavery had been ended — and lived there the rest of his life.

Searing said this “Jerry Rescue” was an “earthquake voice through the land” and became a “celebrated and seminal moment in the fight against slavery until the outbreak of the Civil War.” The Syracuse community commemorated this event in 1990 with a “Jerry Rescue Monument” in Clinton Square. That monument has Loguen flanking Jerry on one side.

After the rescue, several people accused Loguen of assaulting a federal marshal and encouraging violence the night of the Jerry Rescue. Although Loguen admitted he was at the “vigilance committee’s” planning meeting, he denied participating in the actual storming of the building to rescue Jerry from his jail cell, or committing any type of violence. Loguen realized that his own life was in jeopardy because of his actions in the Jerry Rescue and decided he needed to flee to Canada to escape prosecution.

A stop in Waterloo

With that background, I can talk about the Seneca County part of this famous event. On his way to Canada, Loguen stayed one night at the Waterloo home of Thomas and Mary Ann M’Clintock. The M’Clintocks were active Quaker abolitionists and supporters of the Underground Railroad, so naturally they welcomed Loguen into their house. Another person (probably Thomas Mumford, the former editor of the “Seneca County Courier”) was also there and reported that Loguen “was a man of noble countenance and gigantic stature, well armed (sic), and determined to die rather than be enslaved. He was apprehensive and wakeful, walking in his room during most of the night, and if his pursuers had come, the house of a man of peace would have been the scene of a deadly struggle.”

After reaching Canada, Loguen wrote a letter to District Attorney Lawrence denying the charges made against him. He also wrote to New York Gov. Washington Hunt, saying he would be willing to face trial if he could be assured that he wouldn’t be captured and returned to slavery. Loguen apparently didn’t receive a response to either letter.

Nine suspects, including Loguen, fled to Canada to avoid trial for their actions in the Jerry Rescue. The 12 others accused in the Jerry Rescue were arrested to be tried for their actions. Supporters of the Jerry Rescue, including U.S. Sen. William H. Seward of Auburn, raised funds to pay the bonds for these suspects. After several postponements, the first such trial occurred in January 1853, with Enoch Reed, a Black man, tried and found “not guilty” of violating the Fugitive Slave Act. A major reason for this verdict was that John McReynolds had purchased Jerry “in absentia,” so it was never determined that McReynolds had a valid and legal claim to Jerry. Reed, however, was convicted for resisting a federal officer and died before his appeal could be heard. As for the trials of the others, William Salmon was acquitted, the Ira Cobb and J.B. Brigham cases resulted in hung juries, and the other cases were postponed indefinitely in 1853. The charges against these remaining defendants were dropped in June 1861.

After the trials concluded and a letter was published in Frederick Douglass’ newspaper claiming that Loguen would be safe in Syracuse, Loguen returned to the city. He assumed that the despised Fugitive Slave Act of 1850 was now null and void in Syracuse, so he resumed operating as an Underground Railroad station master in Syracuse. Following the Civil War, Loguen rose to the rank of bishop of the American Methodist Episcopal Zion Church, responsible for the Alleghany and Kentucky conferences.

Loguen was inducted into the National Abolition Hall of Fame in 2011. The “Jerry Rescue Monument” still stands in Clinton Square in downtown Syracuse. Waterloo and Seneca County can be proud of how the M’Clintock family of Waterloo helped Loguen on his way to Canada.