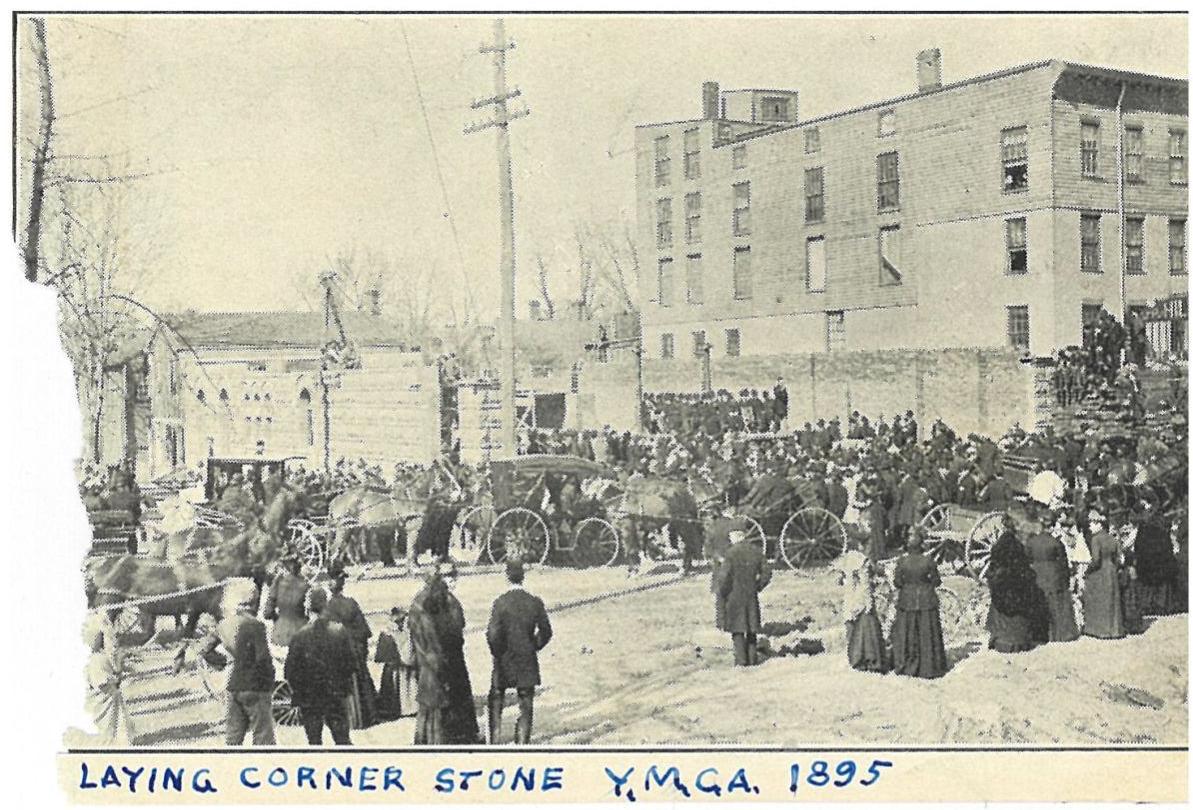 Laying the cornerstone of the Geneva YMCA on Castle Street in 1895. 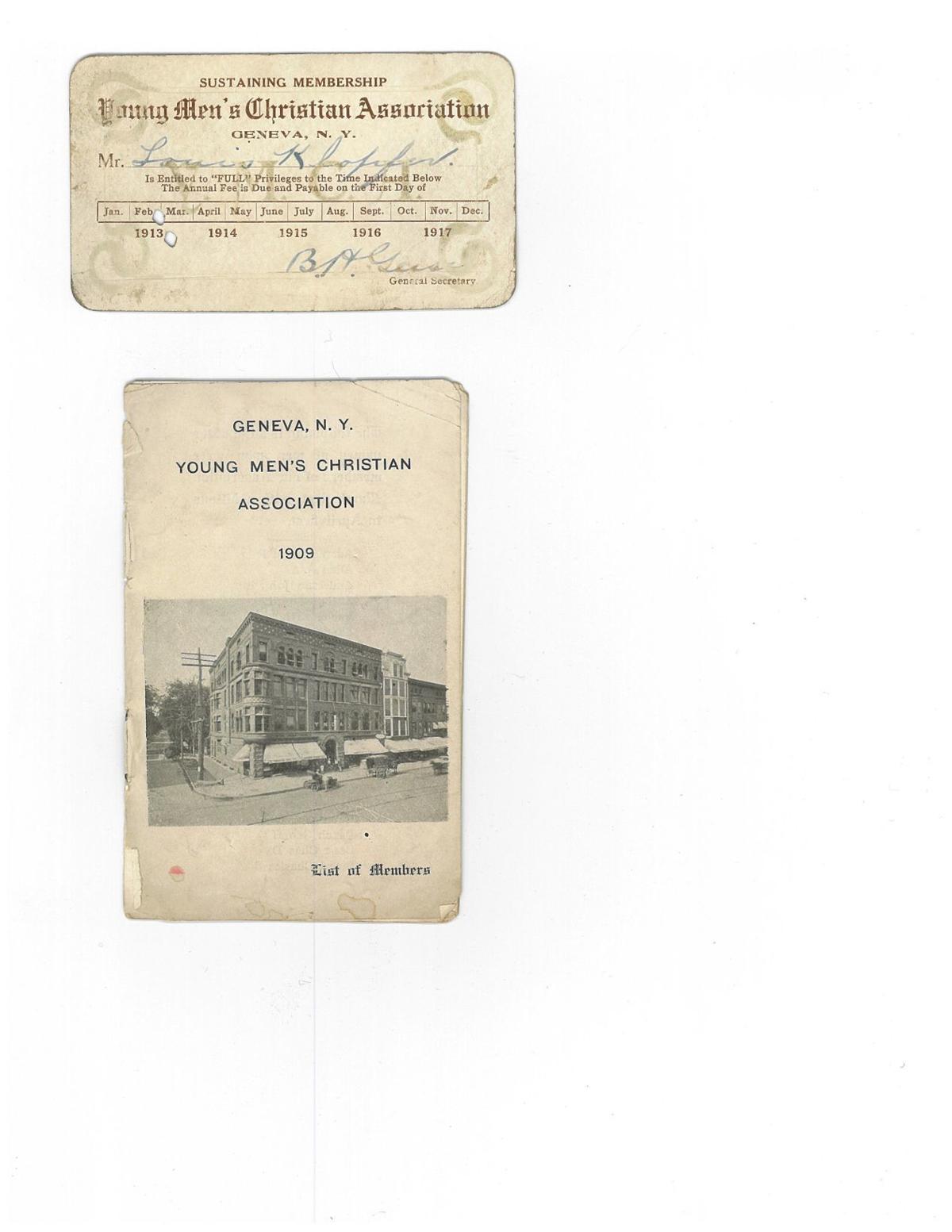 A Geneva YMCA membership card and pamphlet from the early 1900s. 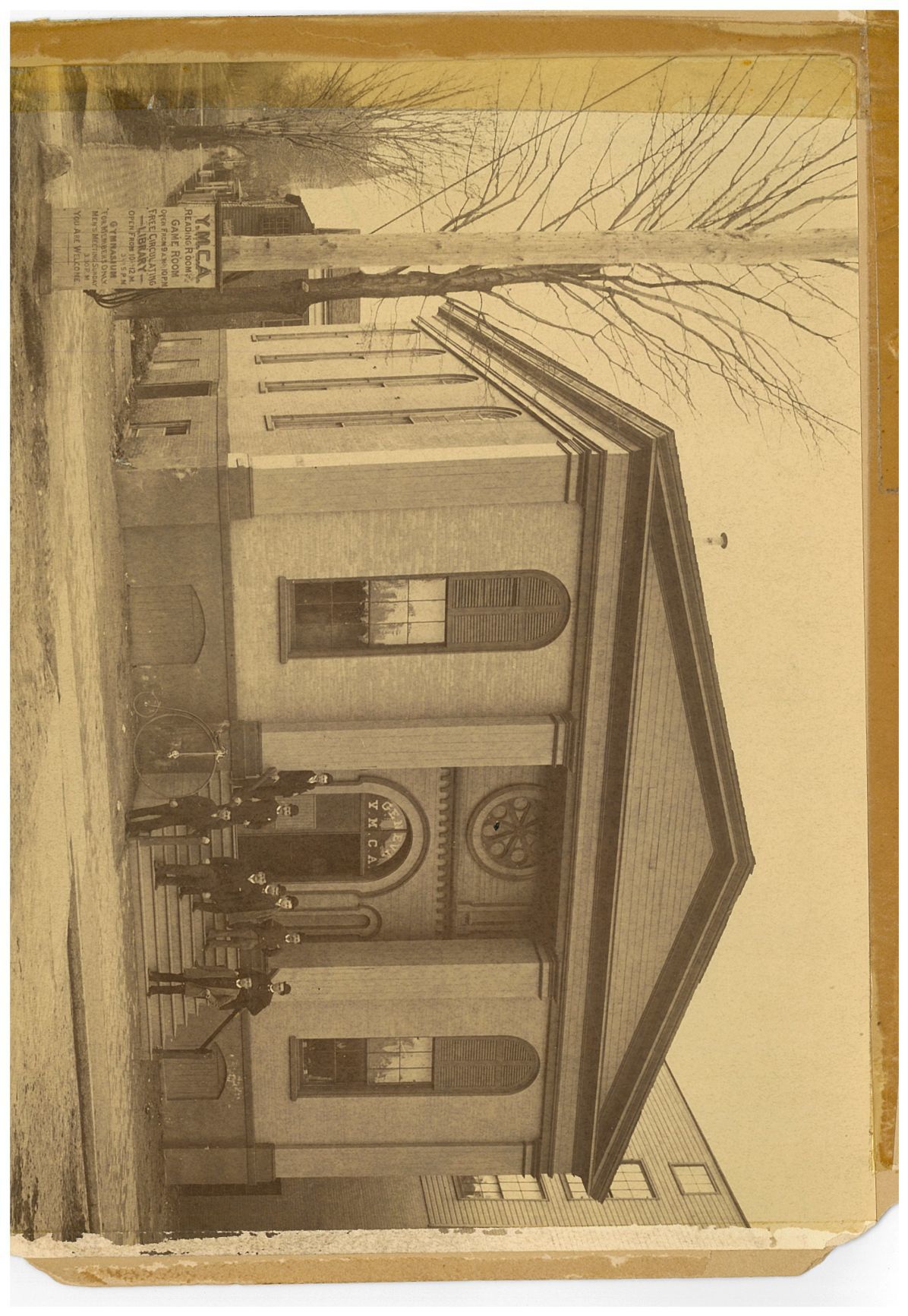 The Old Scotch Church, the former home of the Geneva YMCA on Castle and Seneca streets. 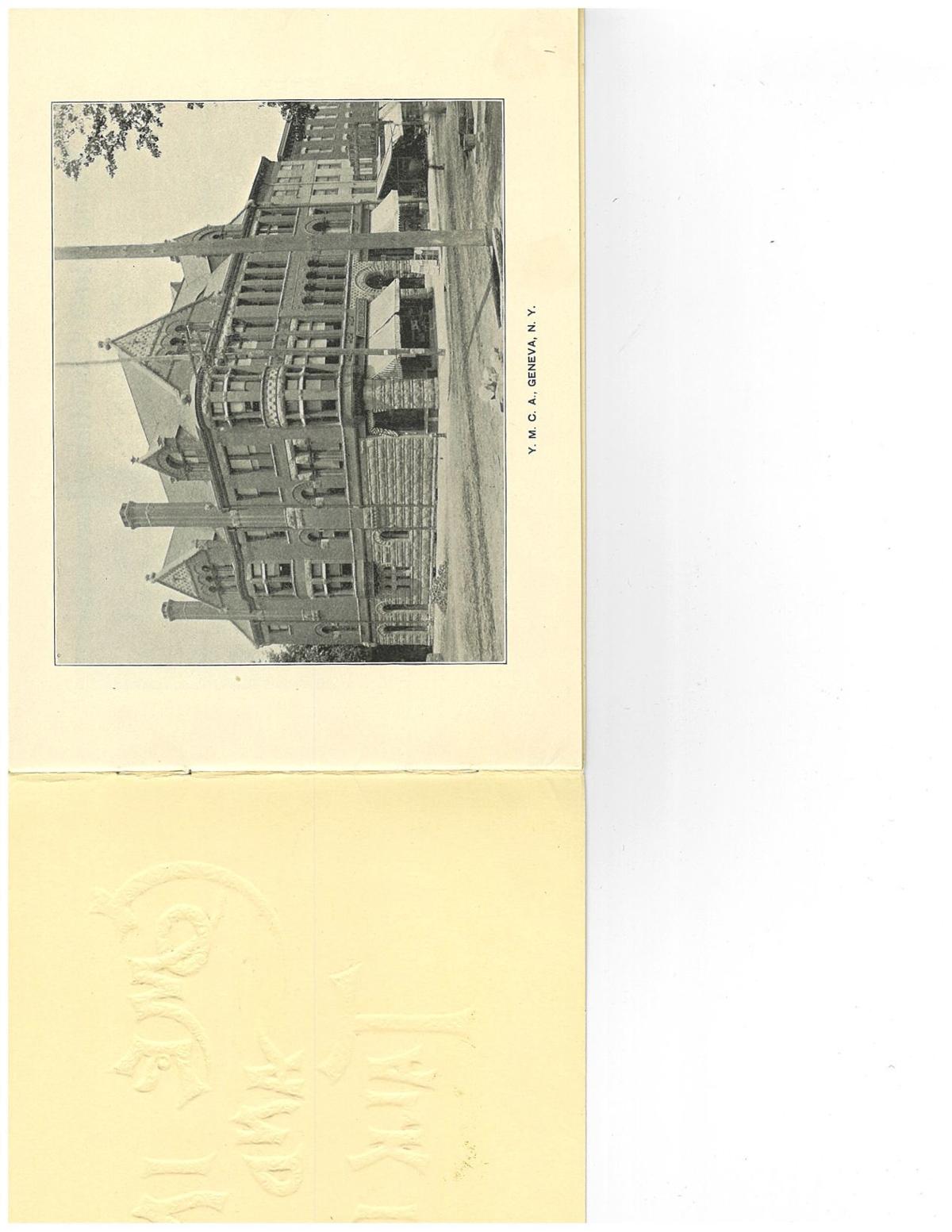 The completed YMCA on the corner of Castle and Genesee streets. 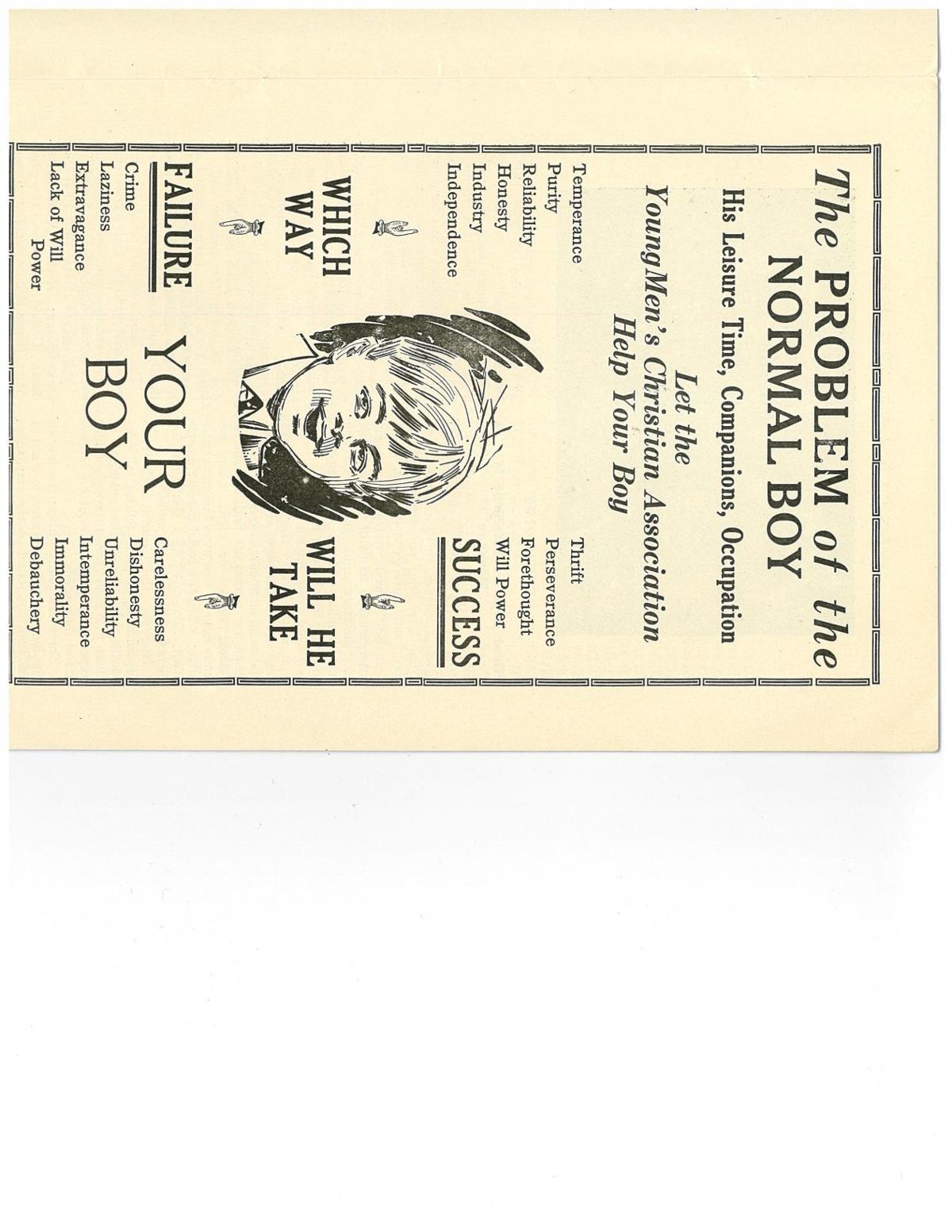 An ad promoting the need for a YMCA.

Laying the cornerstone of the Geneva YMCA on Castle Street in 1895.

A Geneva YMCA membership card and pamphlet from the early 1900s.

The Old Scotch Church, the former home of the Geneva YMCA on Castle and Seneca streets.

The completed YMCA on the corner of Castle and Genesee streets.

An ad promoting the need for a YMCA.

The Geneva Young Men’s Christian Association (YMCA) is part of an international non-profit organization that reaches 64 million people in 120 countries. YMCAs in the United States have a presence in 10,000 neighborhoods, serving innumerable people.

The Geneva YMCA started when a group of young men gathered in the chapel of the First Presbyterian Church on Jan. 31, 1886. Each of the major churches in Geneva sent three men from their congregation; Trinity Episcopal, First Presbyterian, North Presbyterian, St. Peter’s and the Methodist and Baptist churches all sent representatives. The organization they founded was originally called the Young Men’s Christian Union and had 75 members and 10 officers. The officers each came from one of the city churches. The original six churches each had an officer, with J.L. Bennett from First Presbyterian holding the position of chairman. The officers also included men from the German Evangelical Church, Hobart Chapel and the Hygienic Institute (now the Pulteney Apartments).

At the meeting on Feb. 14, 1886 those present signed a constitution for the organization. By the conclusion of the Feb. 28 meeting these men decided that more needed to be done to save young men from sin and death than assembling on the Sabbath. They thought it was imperative to provide rooms for men above the businesses downtown. A Central Committee would select the rooms and furnishings, appropriate literature, innocent games and attractions. Furthermore, they should provide a place for socializing and a place (gymnasium) to provide for physical development.

By the time September 1886 rolled around the men of the YMCU were aware that the New York State Young Men’s Christian Association (YMCA) offered support to other organizations with similar aims and a meeting was called to consider reorganizing and joining the YMCA. The members unanimously approved this idea so they signed a new constitution, adopted new by-laws and elected officers (a smaller group this time) in accordance with the YMCA New York State rules.

It took six months of hard and often discouraging work to secure rooms and raise funds before they were successful in implementing their idea. The membership grew from 25 to 220 during that time and in 1887, after renting meeting rooms in several places downtown, the organizers of the Geneva YMCA purchased the Old Scotch Church (also know as the Associate Reformed Church or Scotch Reformed Church) on the corner of Genesee and Castle streets for $300 — giving the “Y” a permanent home.

“The western half of Church is partitioned off into three rooms, each of which is separate from the other by handsome curtains, and which will be used for a reading room and offices ...” according to a newspaper clipping dated 1887. Another room was set aside with equipment such as ropes, parallel bars and vaulting horses so men could work on fitness.

It was not long after the Scotch Church was set up that the YMCA outgrew the building and by March 1891 the officers passed a resolution appointing a committee to investigate a new building. By April 1891 a committee began to solicit subscribers for a new YMCA building. By August and September of 1892 newspapers carried articles about the careful dismantling of the old church, done with the intent of reusing many of the 100,000 bricks in the new building.

The new building opened in June 1894 with four shops on the ground floor; library, reading room and meeting rooms on the second floor; a gym on the third floor; and locker rooms on the top floor. However, the building was only open about eight years when it caught fire and burned, requiring Hydrant Hose to rescue two employees from the roof and also some boys using the gym. The entire interior was gutted but in only two days plans began for reconstruction. By 1904 a new “fireproof” building was open on the same site.

The YMCA kept current with the times by installing a swimming pool in a separate building behind the Castle Street building in 1911. By 1923 the minutes books record holding classes for girls with a Women’s Committee to oversee them and a Ladies Day which would be held either Tuesday or Thursday of each week. By 1945 the Annual Report of the New York YMCA showed a growing number of women and girls becoming members. In the 1960s YMCAs started offering child care centers to accommodate the growing number of working women.

The “Baby Boom” following World War II created a demand for a new and more updated building to replace the Castle Street YMCA. In 1968 the board of directors voted to close and sell the Castle Street building. Leon Curry donated a lot on the corner of Norwood and William streets and after three years of fundraising the current YMCA opened on William Street in 1969. That same building was remodeled in 1983 to fit growing needs.

Today’s YMCA offers a wide variety of classes, recreational programs, first aid classes, lifeguarding classes, clubs, camps and fitness programs for everyone in the community from infants to senior citizens. They Y currently serves 3,000 families, seniors, adults and children and once again finds itself needing to expand. If you would like to learn more about their plans and fundraising, please stop at the YMCA and ask for details, or visit the Geneva Historical Society where there is an exhibit explaining the history and current plans for the YMCA.

Osburn is the Geneva City Historian and may be reached at Kdosburn2@gmail.com