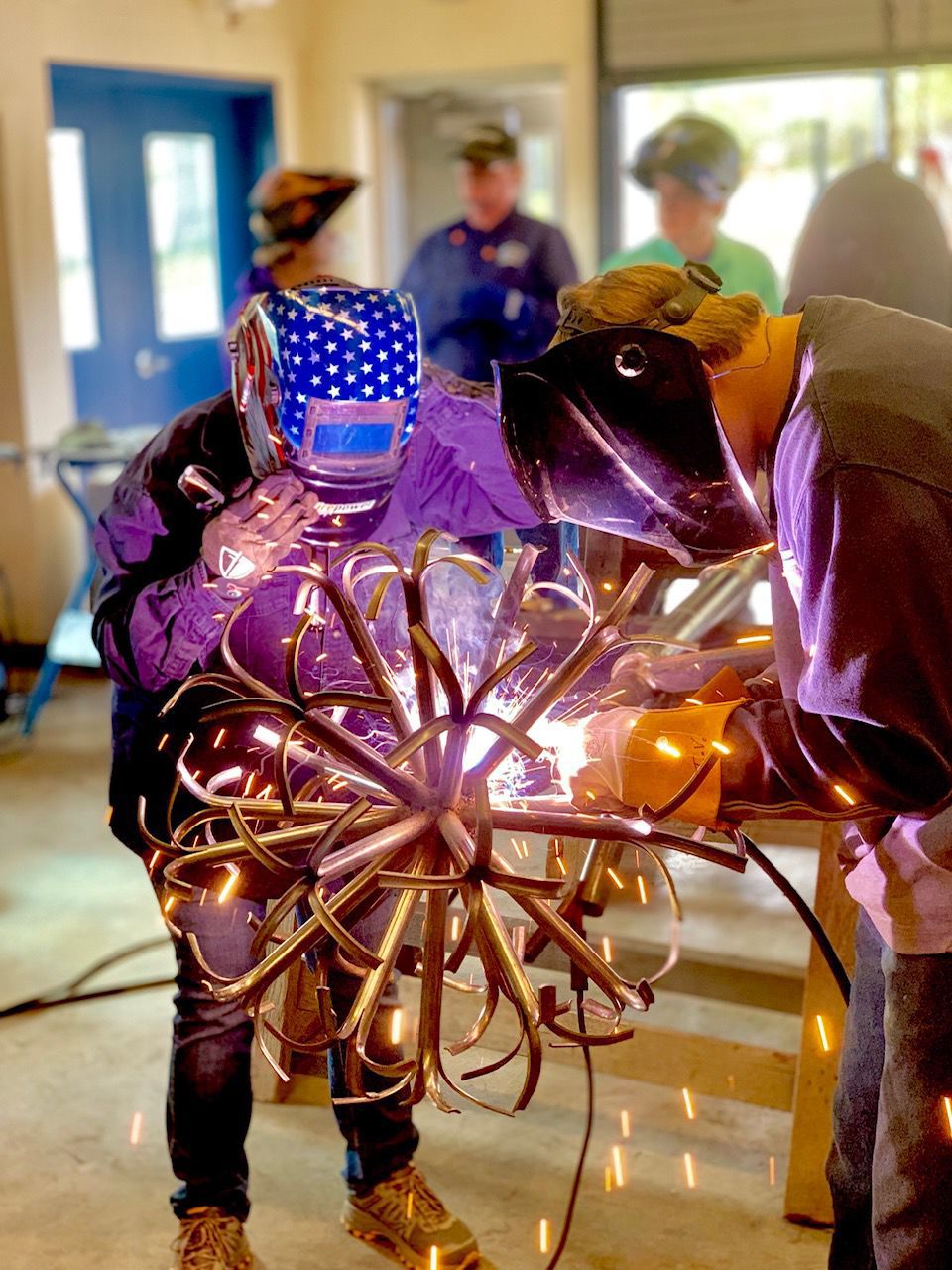 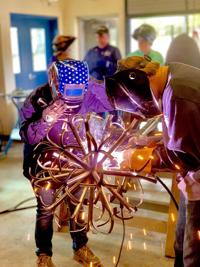 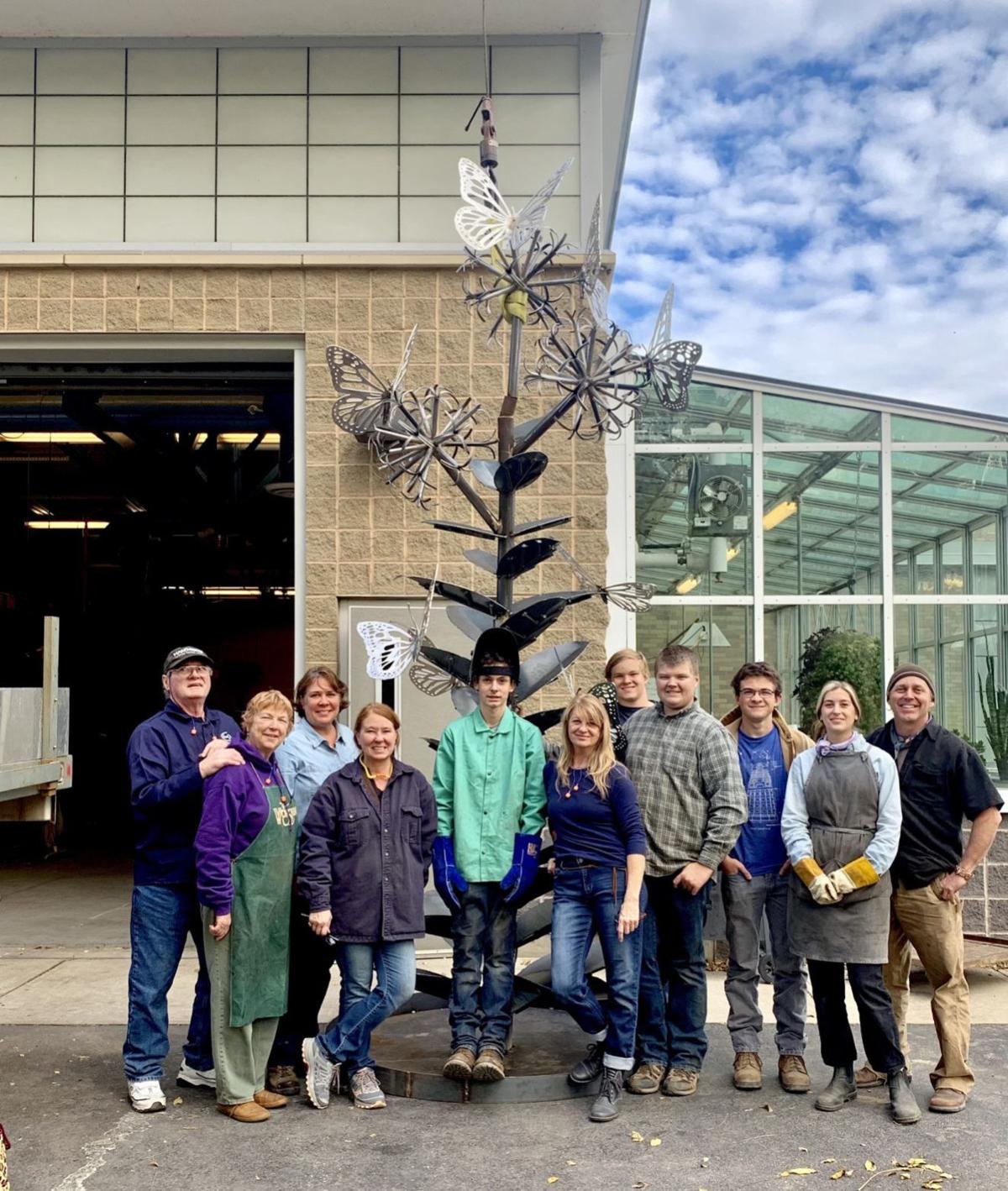 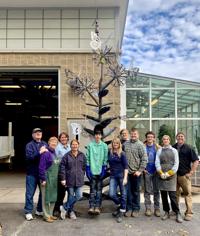 Participants in last month’s “Exploring Ecology Through Metal Workshop” led by Sam Castner and Lindsey Dean at Penn Yan Academy pose with their finished sculpture. It will be the first piece on a planned art trail near the Yates County Community Center. 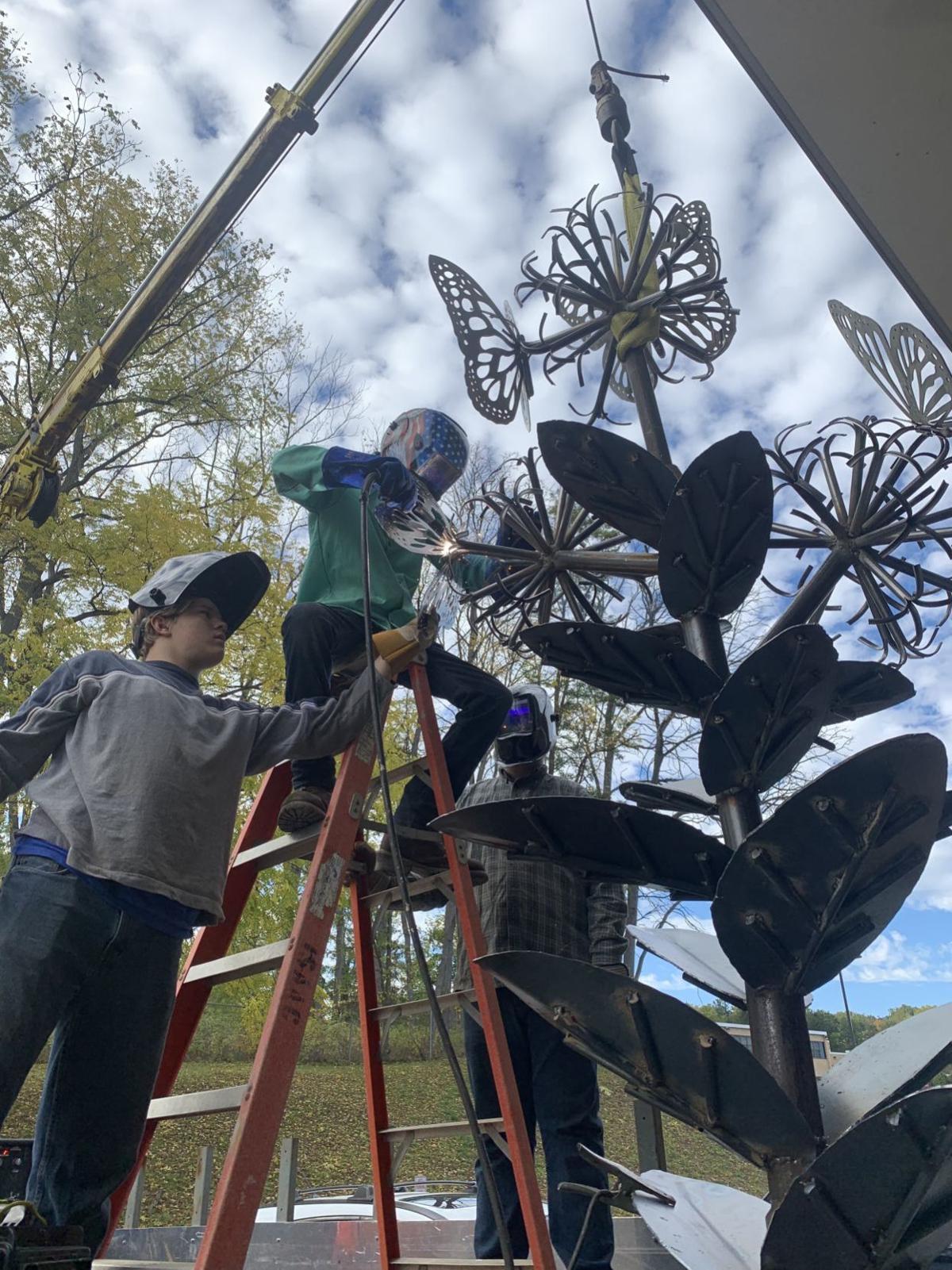 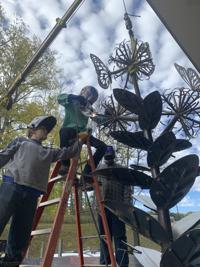 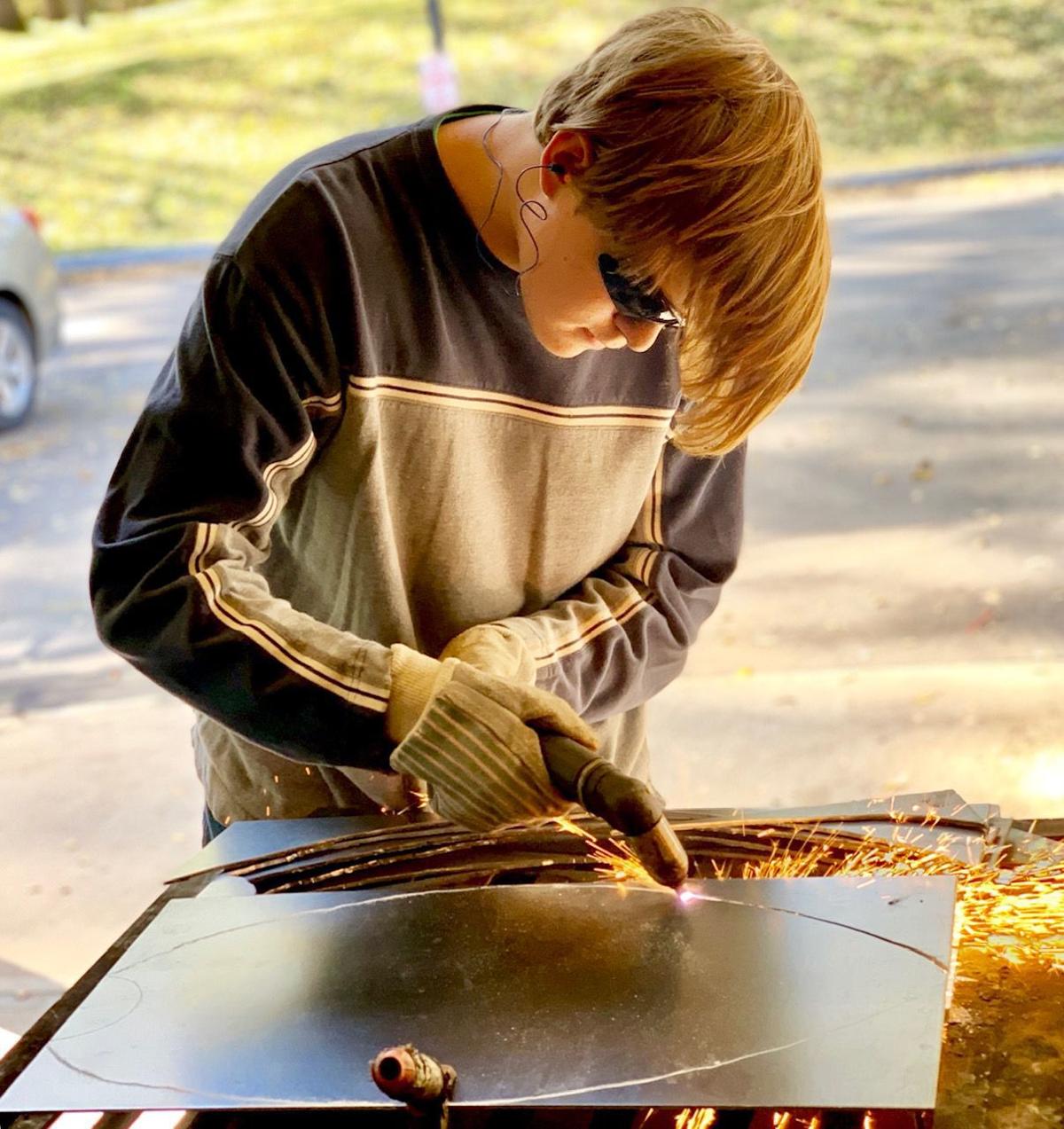 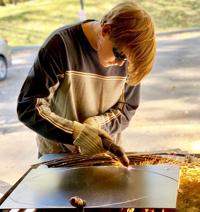 Trevor Champlin, a Penn Yan Academy student, uses a plasma cutter to cut out a leaf for the milkwood plant part of the sculpture. 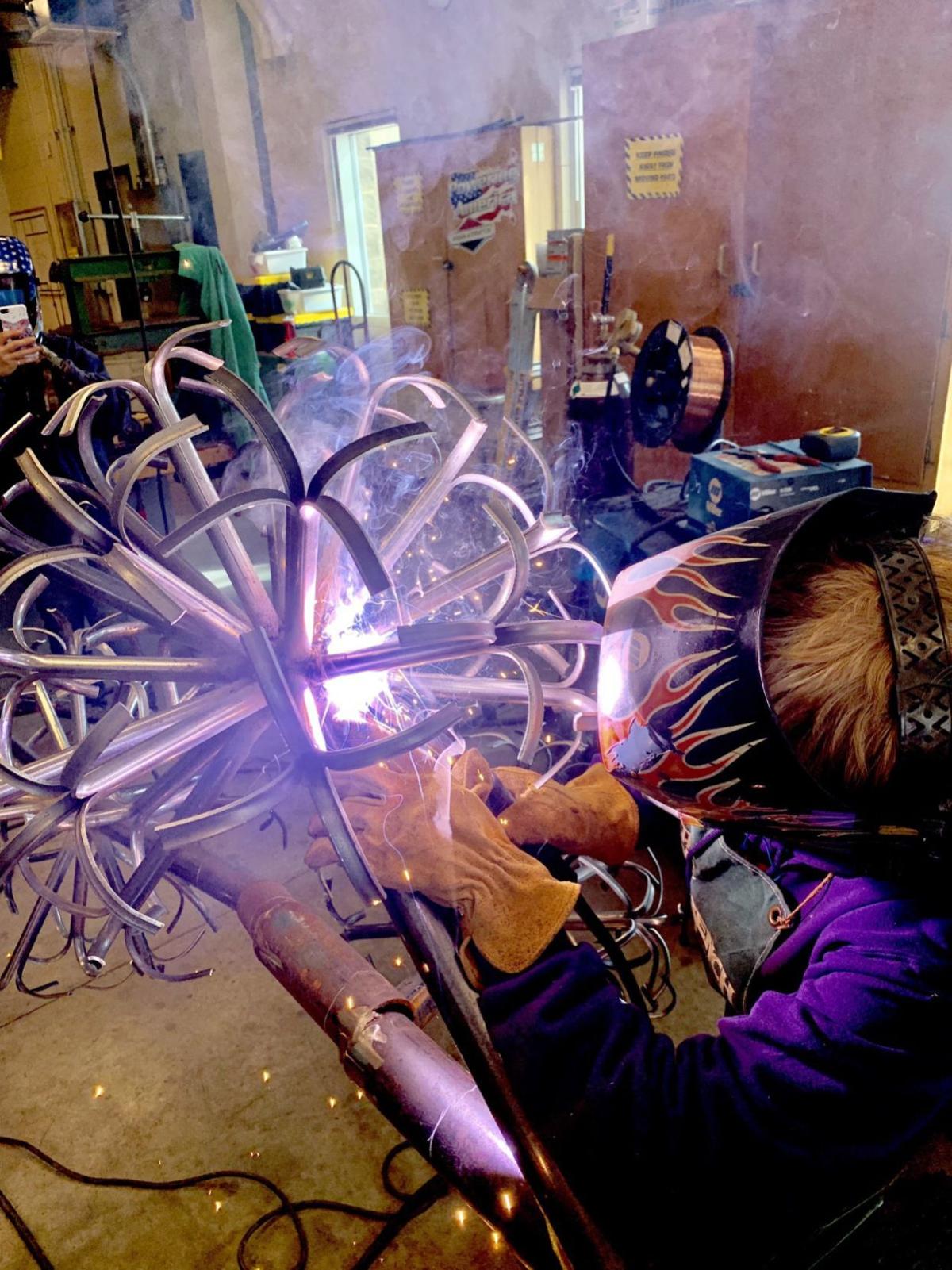 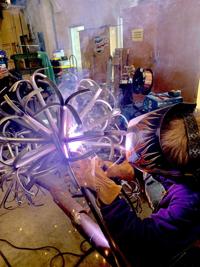 Diane Stratton Smith welding the flower portion of the sculpture. 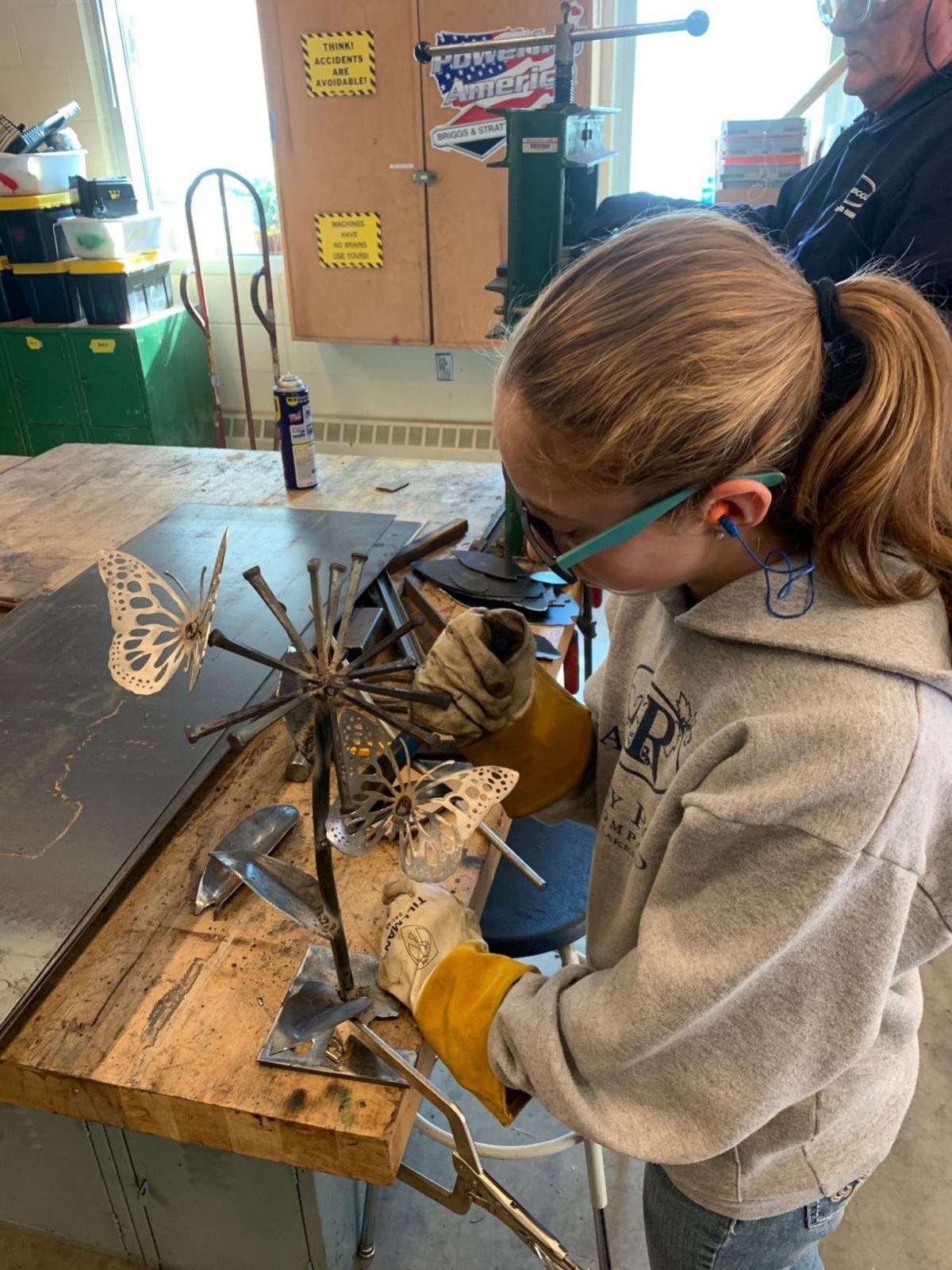 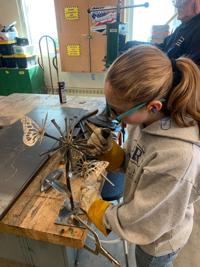 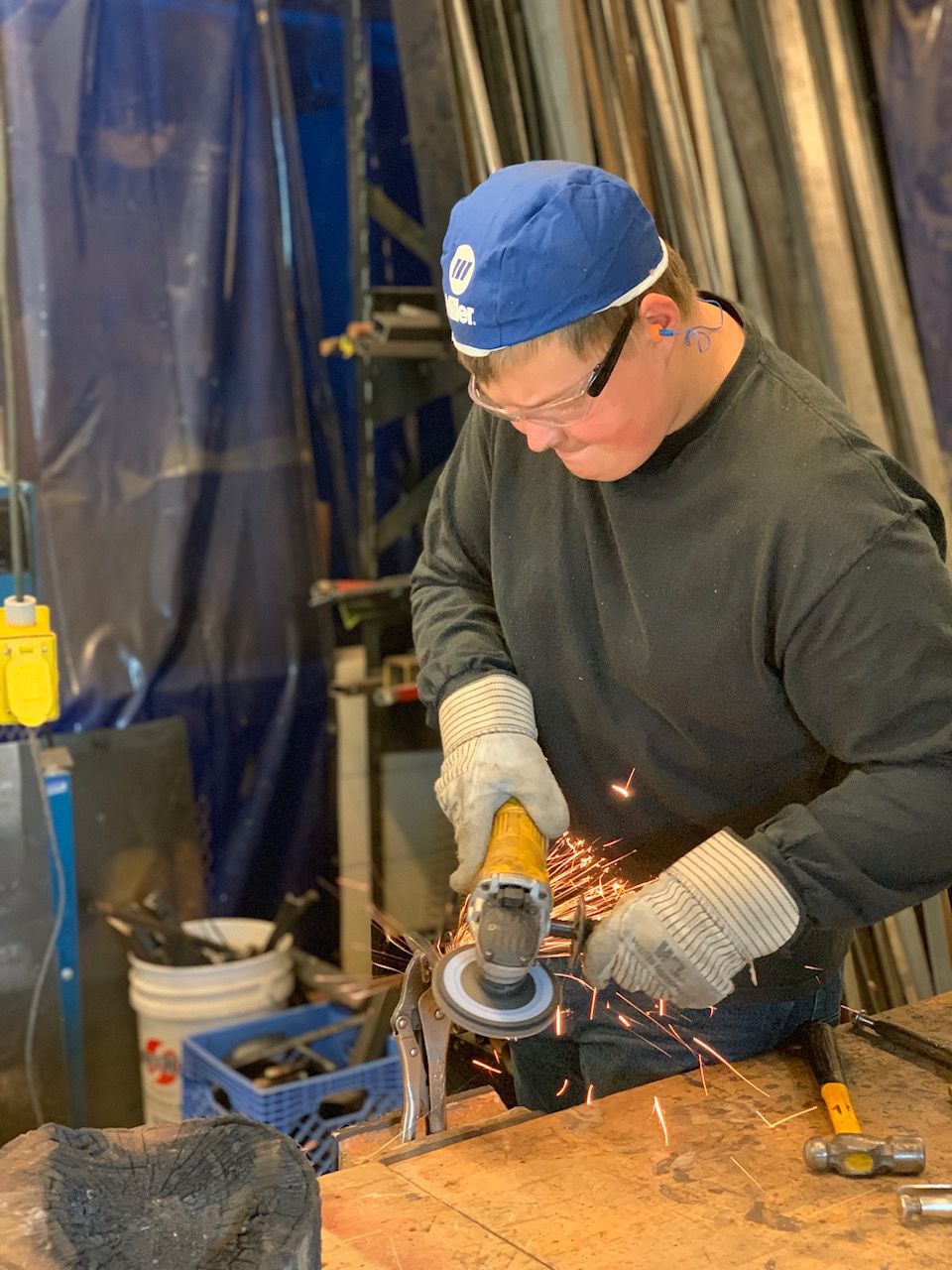 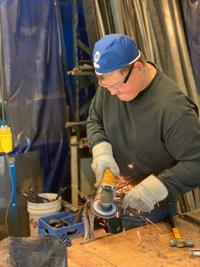 Thomas Bartlett of Dundee grinds parts for his individual sculpture.

Participants in last month’s “Exploring Ecology Through Metal Workshop” led by Sam Castner and Lindsey Dean at Penn Yan Academy pose with their finished sculpture. It will be the first piece on a planned art trail near the Yates County Community Center.

Trevor Champlin, a Penn Yan Academy student, uses a plasma cutter to cut out a leaf for the milkwood plant part of the sculpture.

Diane Stratton Smith welding the flower portion of the sculpture.

Thomas Bartlett of Dundee grinds parts for his individual sculpture.

PENN YAN — Sam Castner is an acclaimed artist-designer whose metal creations are seen at multiple Finger Lakes wineries and the Finger Lakes Welcome Center in Geneva.

But his path to artistic and professional success was not a straight one. Castner, a 1993 Penn Yan Academy graduate, said he struggled in high school and it wasn’t until he took a ceramics class at Alfred University that his life’s work started to coalesce.

Today, Castner — 44 and the father of four children ranging in age from 5 to 14 — is committed to being the person he needed when he was in high school. And the means to that end is working with Yates County youth on art and design and introducing them to the power of the creative process.

The most recent manifestation of that effort took place during a weekend workshop last month at Penn Yan Academy. Youth and adults alike spent one full day learning welding techniques and creating their own small metal sculptures of a milkweed plant with a monarch on top. The next day they replicated and assembled a 14-foot-tall steel version of the same sculpture that will by year’s end be the first piece installed on the IDEA (Innovation, Development, Elevate, Art) Trail at the Yates County Community Center.

The workshop — titled “Exploring Ecology Through Metal” — attracted about a dozen participants, equally divided among students (grades 7-12) and adults. Students were able to attend for free; adults paid $225 apiece. Castner and his co-creator and right hand Lindsey Dean, who works with him at his Ironvine Studios in Dundee, provided the expertise and some of the equipment. The sessions were held in the Penn Yan Academy technology shop.

The project covered both biological and technological lessons, as Castner explained that milkweed is the only plant monarchs will lay their eggs on. The hands-on lessons included instruction in shop techniques and how to operate both traditional tools like hammers and wooden blocks to modern-day tools like plasma cutters and welders.

Castner said the students came with “all skill sets. Most of the students here have never done anything like this before,” he said.

Case in point is Thomas Bartlett, 16, a Dundee High School junior. He said he’s taken tech classes at Dundee but only woodworking is offered. On the workshop’s second day Bartlett was cutting out the milkweed plant’s leaves and welding on the stems. Although the butterflies were pre-cut by a laser cutter because of their intricacy, Bartlett was among those students bending their wings.

“I had zero welding experience before coming to this,” Bartlett said. “It’s been really educational. [This has] been really fun to learn more and do more. ... It really makes me like welding and I want to do more of it in the future.”

Unlike Bartlett, Kameryn Greenfield, 15, a Penn Yan sophomore, has taken welding in school and enjoys it. He was in an Intro to Agriculture class last spring that Castner helped teach and said he’s good at “explaining everything.”

“I like making stuff that other people can see,” Greenfield said.

Among the adults at the workshop was Marla Makatura of Penn Yan, an architectural designer whose husband is a builder. She’s had much experience working with wood, but said she signed up for “Exploring Ecology Through Metal” because she lacks experience with steel. The workshop’s artistic nature also appealed to her.

“We’re going to make something beautiful and I had a little bit to do with that,” she said.

Makatura said Castner and Dean were excellent and patient teachers who gave their students lots of freedom.

“They really did a nice job,” said Makatura, who planned to put the individual sculpture she made in one of her flower beds.

“I’ll look out the front door and it will be right there,” she said.

Alicen Yonts, a Penn Yan school board member and youth coordinator at the Yates Community Center, said Castner approached her about a community project that would introduce youth to art, specifically public art. The duo brainstormed and developed the art trail idea. Yonts secured $8,500 in grants through the National Elks Foundation and the Yates Community Endowment to fund the project, which has also benefited from Castner’s donation of about $15,000 worth of supplies and labor. Overall, Castner estimates he has donated close to $25,000 to start and deliver this unique educational programming.

Earlier this year he held classes at the community center for students in grades K-12, with the goal to develop an idea for art trail. Castner said the elementary students created two-dimensional renderings of animals in the Finger Lakes; the middle school students transformed those drawings into three-dimensional models; and the high school students took those models and worked with them in metal in the school district’s Intro to Agriculture class. The monarch-milkweed design that was eventually settled on for the art trail was conceived by high school student Madeline Martini.

The school district, after discussions with Castner and technology teachers, last year secured a $50,000 grant from the Nord Family Foundation to upgrade its shop equipment. Last spring Castner volunteered his time in the Introduction to Agriculture class over nine weeks to share his welding experience.

Superintendent Howard Dennis said one of the school board’s identified goals is to offer more opportunities to students — and the grant allowed students to work hand in hand with Caster as a kind of an artist in residence. Although the district offers welding basics, Dennis said “it’s one of those things where you can never get enough experts in there.”

Just last weekend, Dennis said 12 students and Castner attended the New York State School Boards annual convention and manned a booth that highlighted this creative partnership and their work. Castner hopes to expand this kind of program to other school districts.

“They had a great time doing that,” Dennis said.

Yonts said the opportunity to work with Castner gives students a chance to get their hands dirty and collaborate in a project that’s not part of a school assignment.

Not to mention that creating a public art piece could spark a passion or lead to a possible career — like it did for Castner 20-plus years ago when he was in college.

“To foster that, that is what this about,” said Yonts, noting plans are afoot for another sculpture.

“This isn’t just a one and done, that’s for sure,” she said.