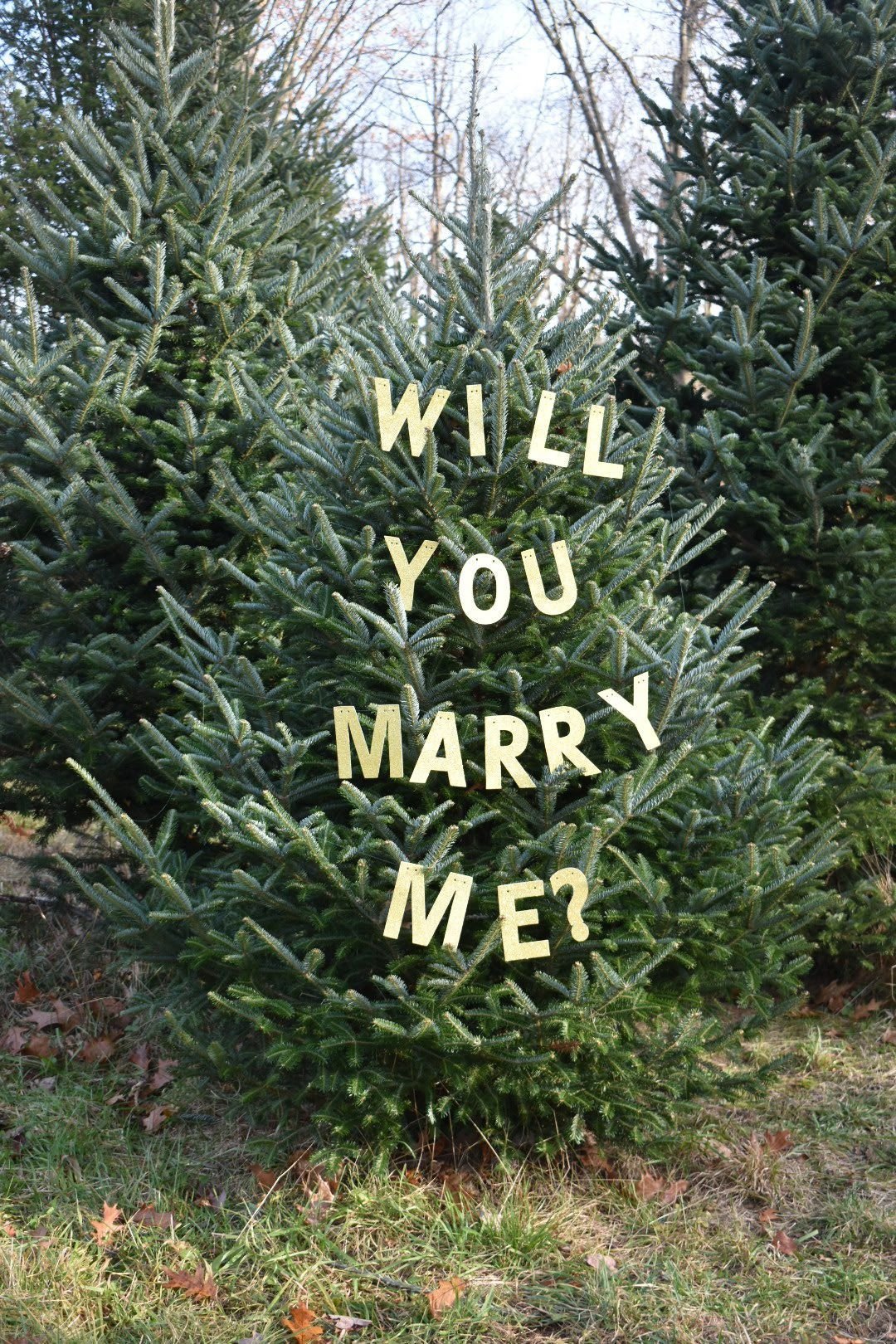 Kevin Wright strung up his proposal on this balsam fir. 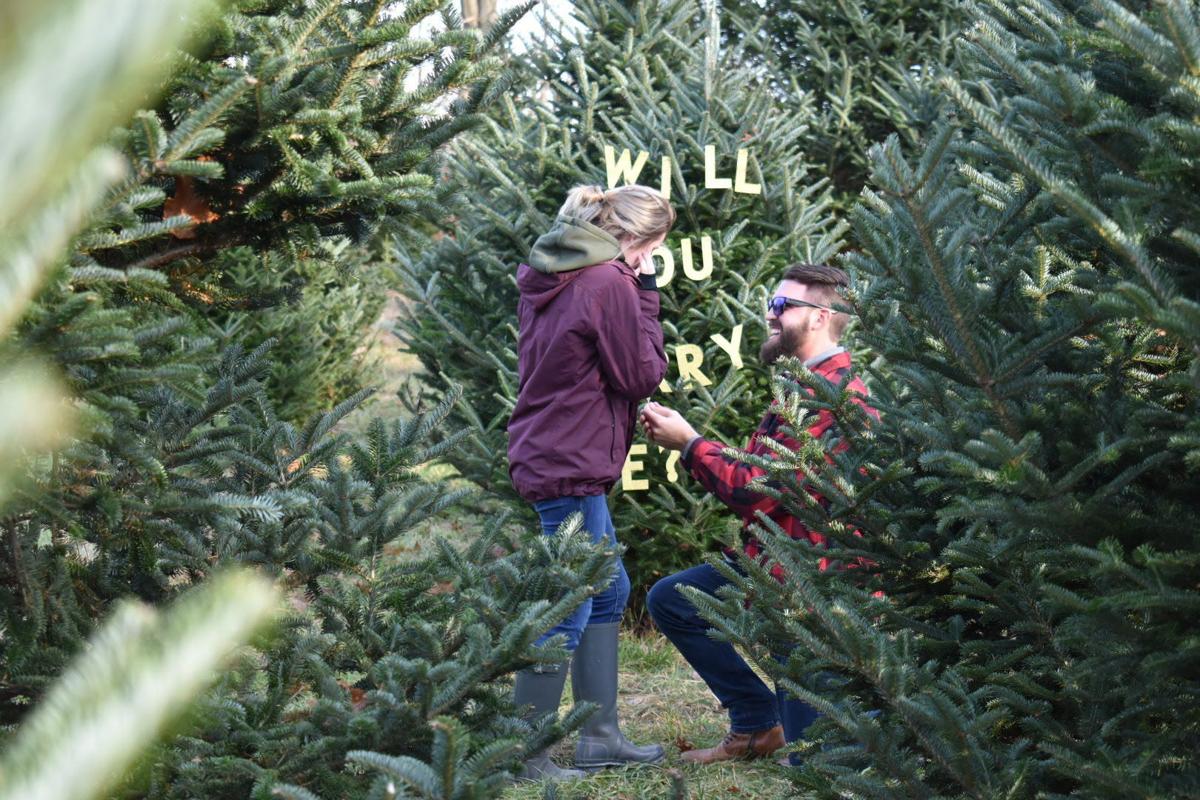 Kevin Wright got down on bended knee when he proposed to Kelsey Belile at his family’s Christmas tree farm in Waterloo. 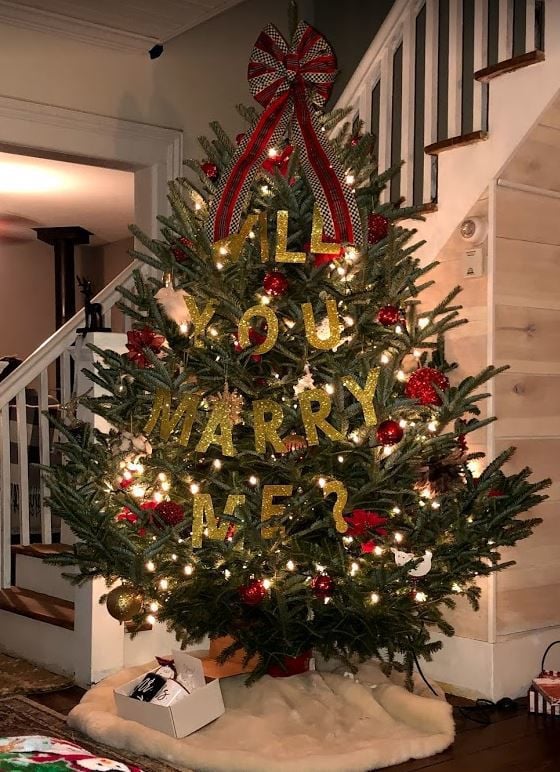 The decorated “proposal” tree in the Waterloo home of Kevin Wright and Kelsey Belile.

Kevin Wright strung up his proposal on this balsam fir.

Kevin Wright got down on bended knee when he proposed to Kelsey Belile at his family’s Christmas tree farm in Waterloo.

The decorated “proposal” tree in the Waterloo home of Kevin Wright and Kelsey Belile.

As a youngster (and still today) he trimmed trees, mowed and fertilized the land — his contribution to the family business.

“I didn’t go to the babysitter’s,” joked Wright, 29, of Waterloo and a 2008 Waterloo High School graduate. “I came to the farm and my grandfather brought me to school.”

So when it came time to pop the question to his longtime girlfriend Kelsey Belile, 28, Wright had no problem selecting the perfect venue — Wright’s Christmas Tree Farm on Reed Road in Waterloo.

“We spend a lot of time here and it’s a pretty important place for me,” Wright said.

The couple, who met through mutual friends and have been dating for about six years, bought a house together down the road that is adjacent to the Christmas tree farm. Wright said they often walk their dog on the property and in the spring search for mushrooms there.

Wright decided he wanted to pop the question on Saturday, Nov. 23, before the farm officially opened for the season and the couple got too busy helping out (he works during the week as a project designer for Marshall Exteriors in Newark and Belile, a 2009 Geneva High School graduate, is the marketing manager for Halco in Phelps). Wright told no one other than his sister, who drove from Dansville to help her brother set the stage for and surreptitiously photograph the proposal.

Wright said Belile had been “champing at the bit” to get a Christmas tree so heading out to the woods that day after his haircut was an easy sell. (Having his haricut provided him and his sister as well as his brother, Timmy, time to decorate the tree and grab a change of clothes for Belile for formal photos afterwards)

Belile was certainly surprised Wright popped the question that day and in that place.

“I thought we were going to get our Christmas tree …. which we were,” she joked.

Wright chose a balsam fir near the area where the couple searches for mushrooms and hung glittery letters that spelled out the message “Will You Marry Me?” He and his siblings had hoped to string the tree with lights but brought the wrong size batteries with them.

“If that’s all that was wrong, I’m fine with it,” Wright said.

As the couple neared the proposal spot, Belile spotted a shiny bolt nut on the ground and picked it up to hand to Wright, who joked that at that moment he “... was fumbling in my pocket for her shiny piece of hardware so it was kind of goofy.”

He turned to Belile and suggested cutting down the message-laden tree as his sister, Katie, documented the moment.

By then, word had spread and family members joined the couple in the shop to celebrate with champagne and dinner later that evening at Torrey Park in Geneva.

The tree, now decorated, is up in the couple’s home with the “Will You Marry Me?” letters undisturbed.

It turns out Kevin is not the first Wright to propose among the Christmas trees. His uncle Paul Wright asked his wife Dianna to marry him at the farm in 1991.

Wright and Belile hope to marry sometime next year but said the ceremony won’t be at the tree farm or around Christmastime.

LEGAL NOTICE Notice of Formation of a Limited Liability Company