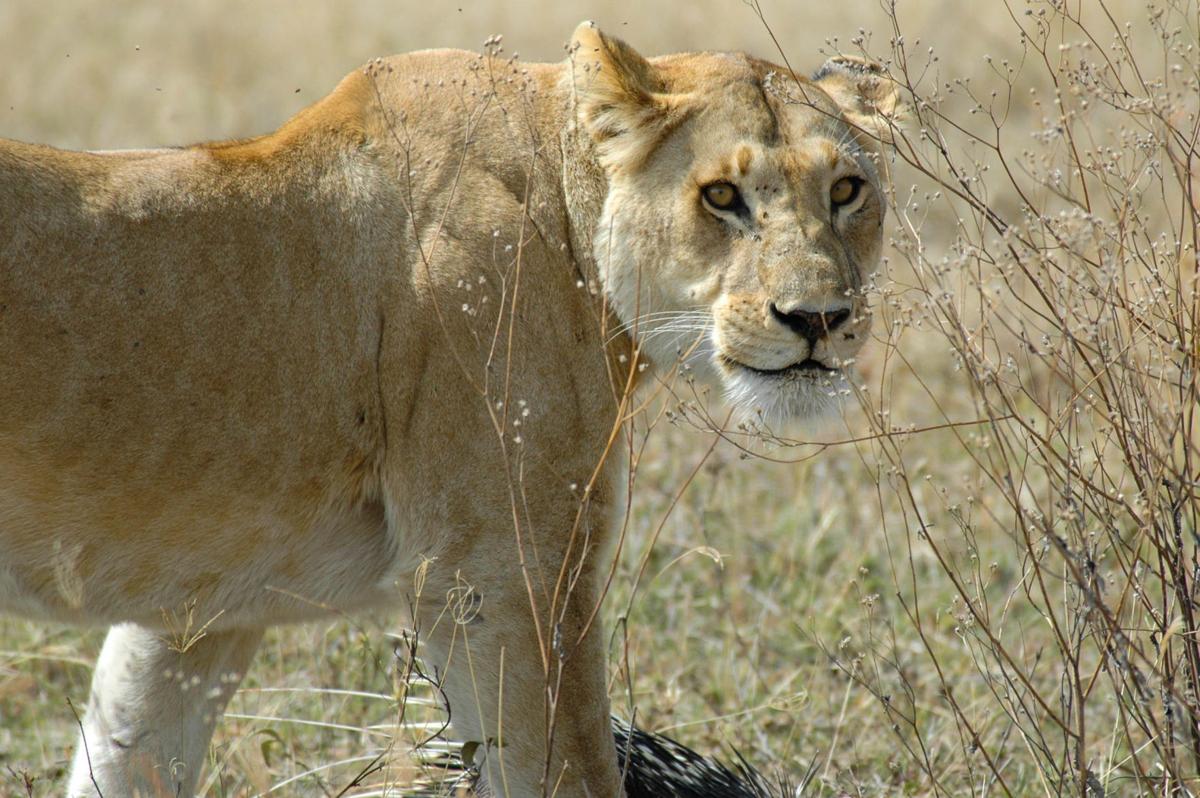 A lioness steals a porcupine carcass from spotted hyenas. 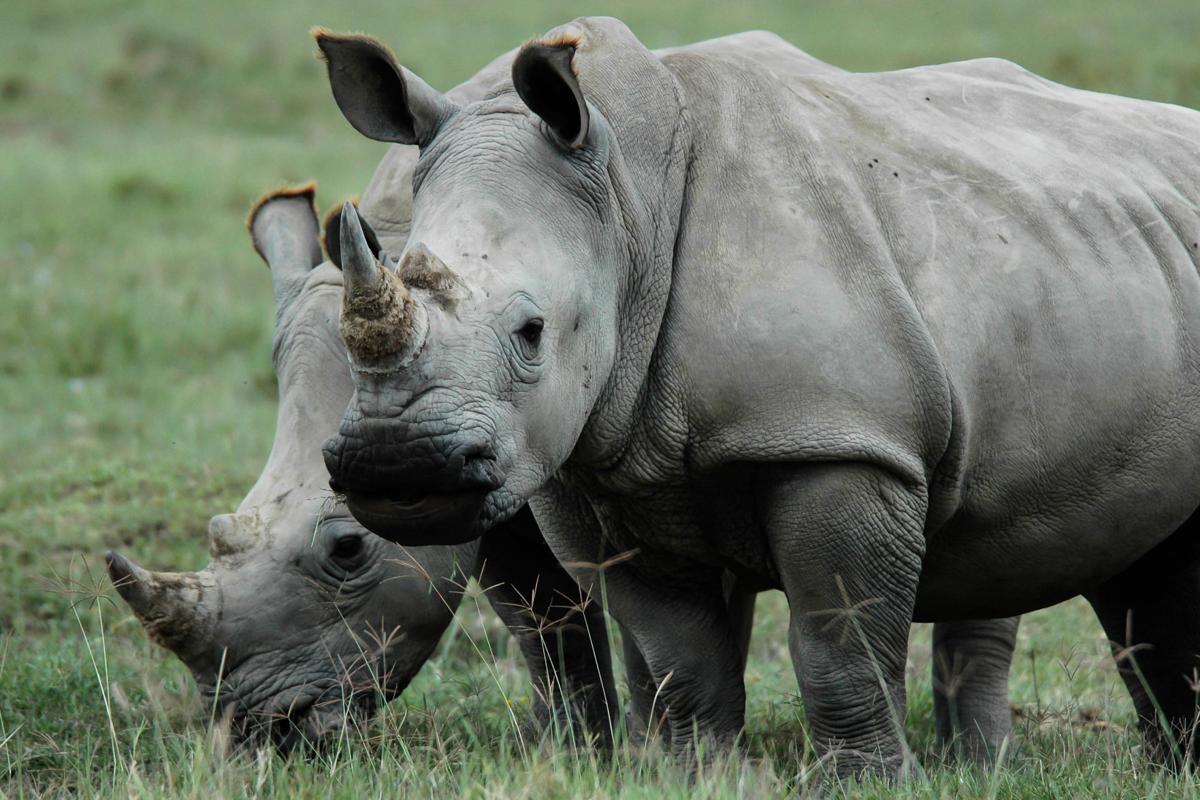 White rhinos, a member of the African “big five,” were named for their wide mouth, not white color, but the name was mistranslated into English. 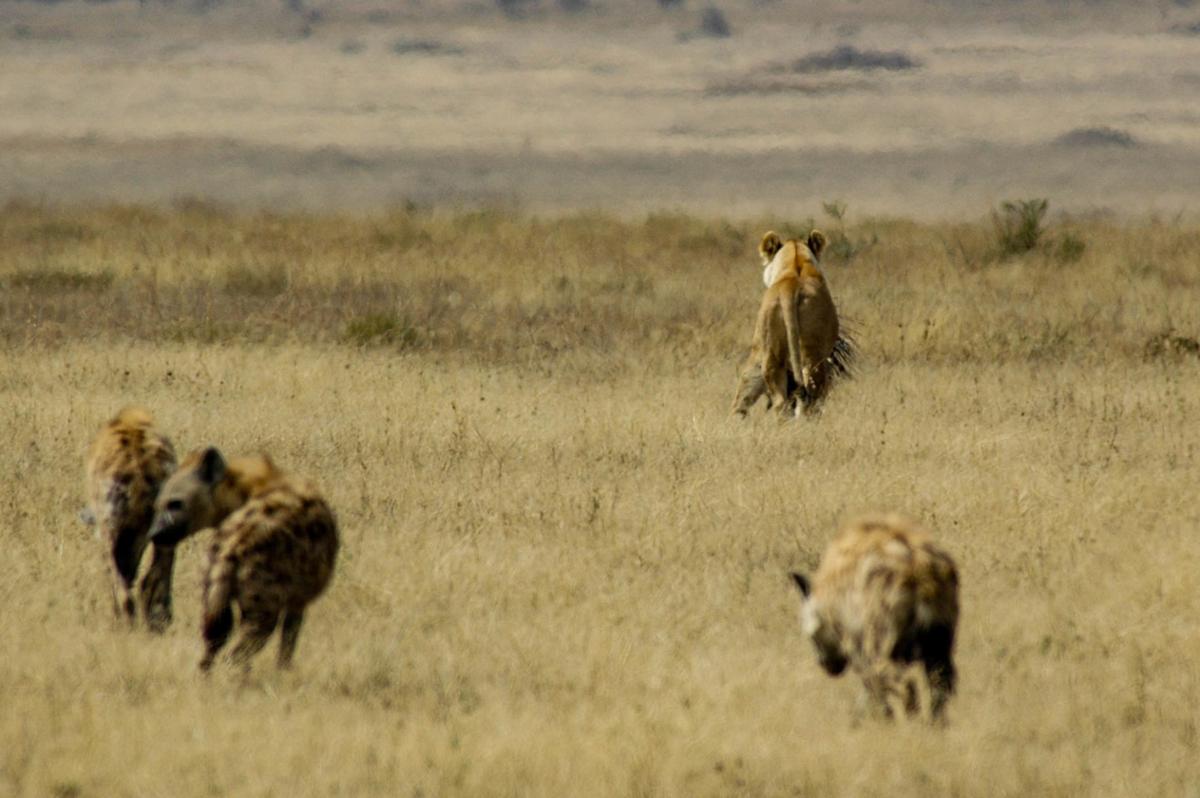 As the lion retreats with her stolen food, three hyenas pursue in hopes of getting some scraps. Note that the lion’s ears are pointed backwards to listen for the trailing hyenas. 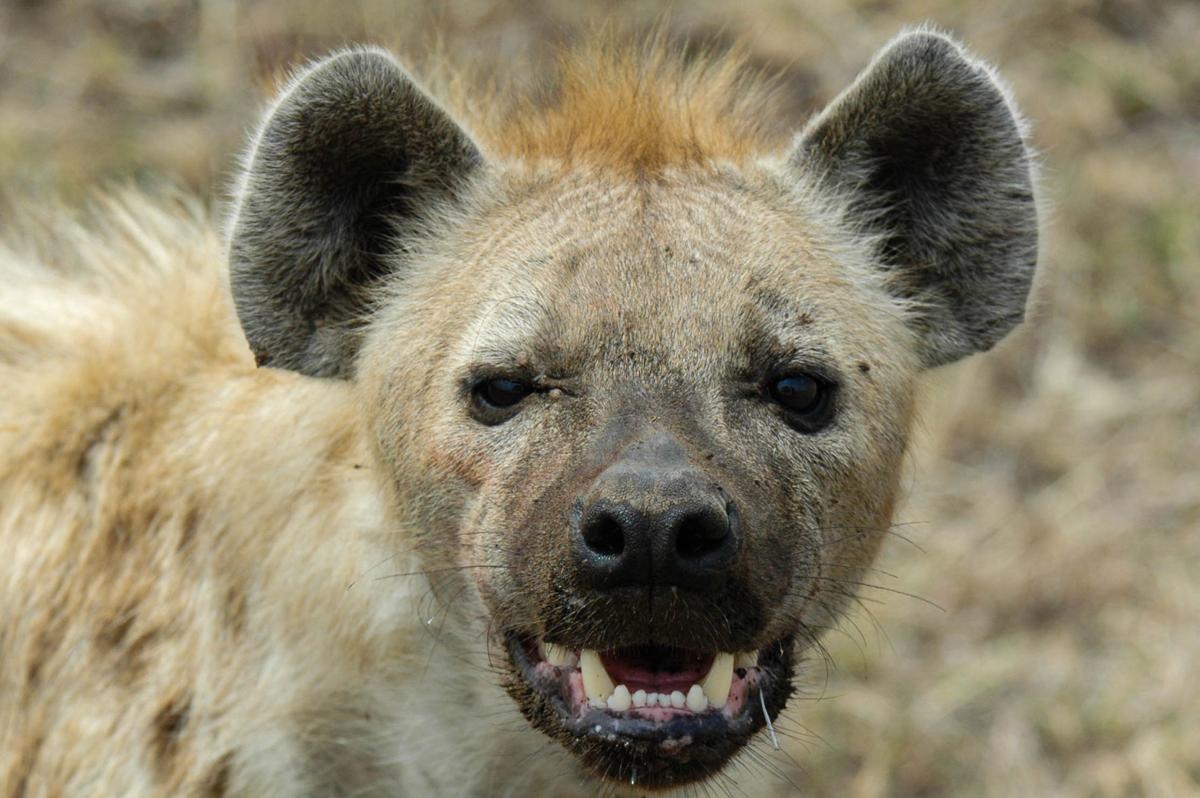 A spotted hyena with porcupine quills stuck in his face. 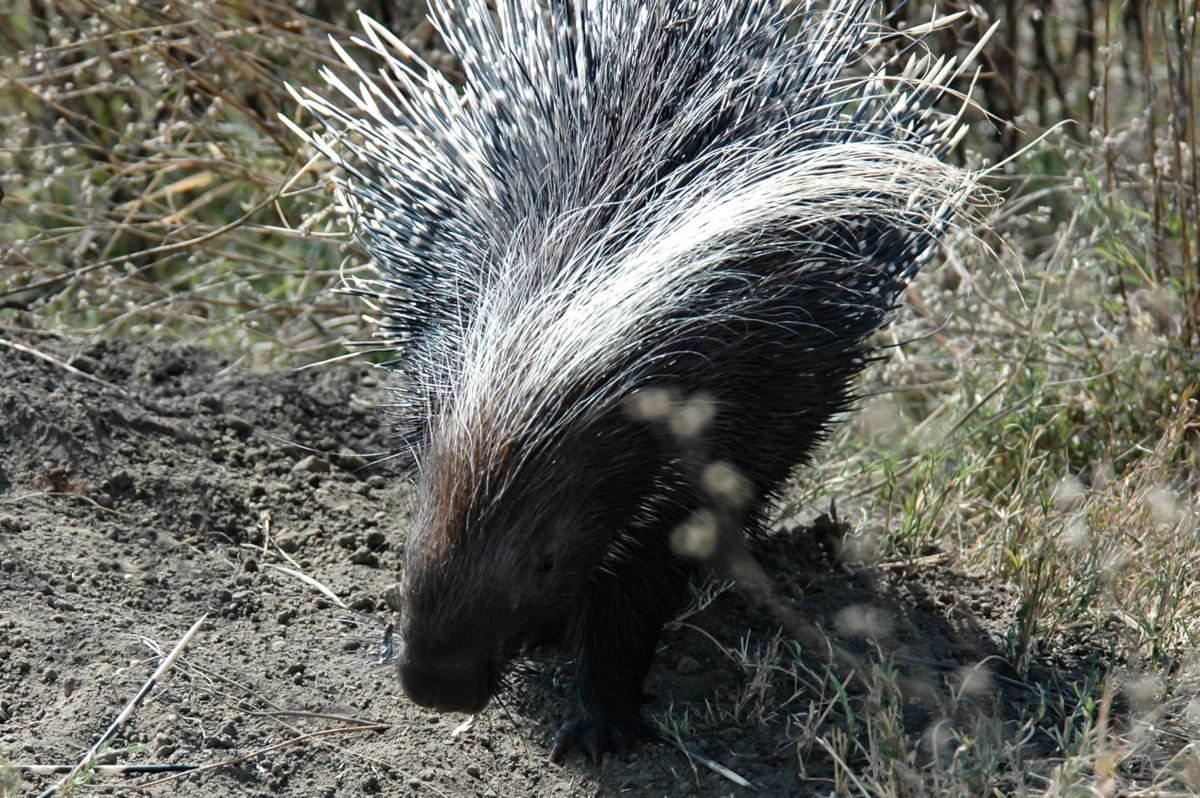 This African porcupine managed to escape from the hyenas by retreating into its burrow. 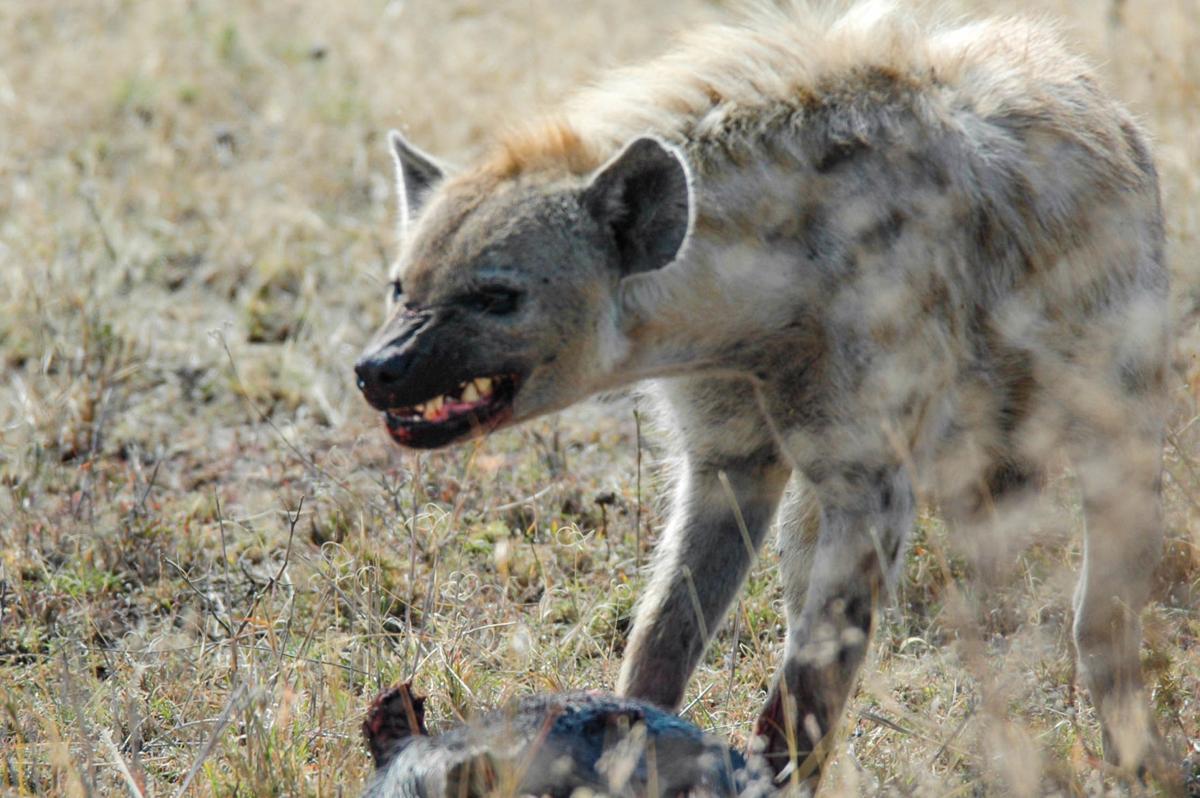 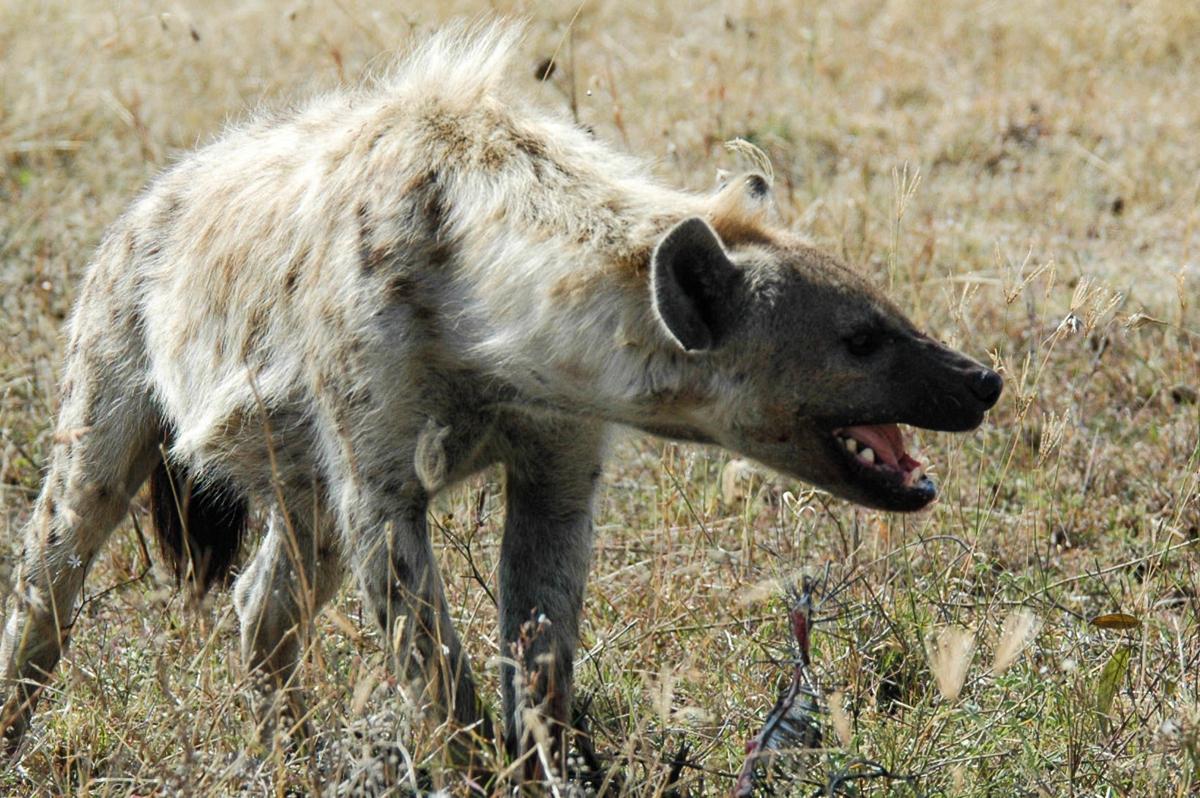 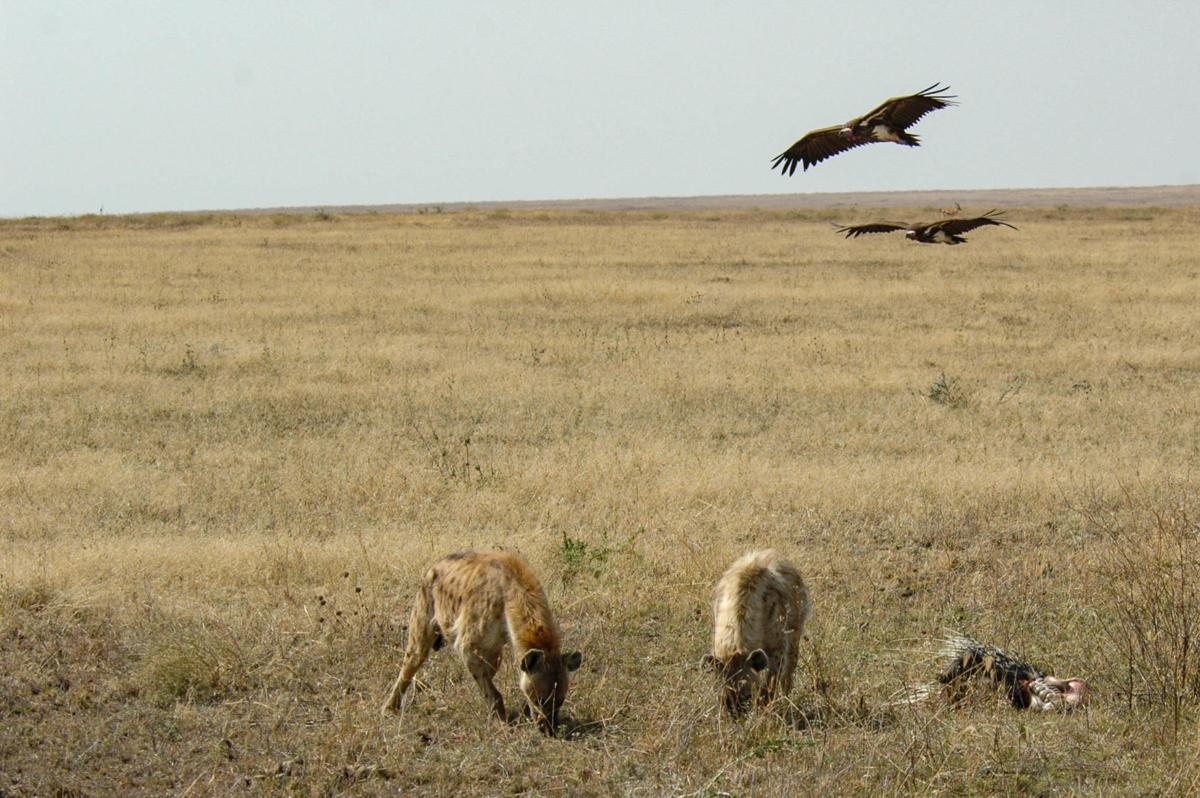 Two vultures are attracted to the hyenas fighting over a kill. Vultures will wait until the predators have left and scavenge the leftovers.

A lioness steals a porcupine carcass from spotted hyenas.

White rhinos, a member of the African “big five,” were named for their wide mouth, not white color, but the name was mistranslated into English.

As the lion retreats with her stolen food, three hyenas pursue in hopes of getting some scraps. Note that the lion’s ears are pointed backwards to listen for the trailing hyenas.

A spotted hyena with porcupine quills stuck in his face.

This African porcupine managed to escape from the hyenas by retreating into its burrow.

Two vultures are attracted to the hyenas fighting over a kill. Vultures will wait until the predators have left and scavenge the leftovers.

I have been intensively thinking and reading about Africa recently as I prepare to co-teach an FLCC Conservation elective course to South Africa. By the time you read this, the trip will be over, but as I sit and write, the trip is a few days away. Only one of the 16 students enrolled in this course has ever been to Africa and none have been to South Africa specifically. As the old saying goes, there is only one chance to make a good first impression, and I am determined to help give my students a fantastic first experience on the African continent.

My own “first impression” came in 2011 when we booked a family safari to many of the famous parks of Kenya and Tanzania. I had dreamed of visiting Africa for as long as I have been interested in wildlife. As a child that mostly meant reading about African adventures in hunting magazines. For those great white hunters, the goal was often to bag the “big five;” the five animals deemed most dangerous to hunt on foot. Elephant, Cape buffalo, leopard, lion and rhinoceros constitute the original big five of Africa. Today, tourists still seek out those species but more often with cameras than guns.

Looking for the big five is a good starting point for any African safari, but focusing exclusively on them means one will miss many of the other, equally interesting animals that inhabit an ecosystem. We always make it clear to our guides that we certainly wish to see the large animals an area has to offer, but we are also in search of the lesser known animals as well.

The term given for large animals that capture our imagination is “charismatic megafauna.” Often these animals do play a large role in their ecosystem and truly warrant the extra attention they receive. Elephants, for example, dig for water in dry river beds. Those holes provide water for other, smaller animals that are unable to dig for themselves. Elephants eat fruits and inadvertently disperse seeds great distances away when they defecate. When elephants are lost, it impacts the whole system.

‘Lost in the bush’

The story I most often tell from our first visit to Africa does include a member of the big five, but only in a supporting role. Although we were heading out on our first game drive in the Serengeti National Park, we had been on safari for 12 days already. Our guide, M’tanganyika, had come to know us well and proposed something different. He offered to take us to a lesser traveled section of the park, turn off the radio that the guides used to communicate with each other about animal sightings and “get lost in the bush.” The idea was appealing. We would be trading the collective knowledge of the dozens of guides sharing information for solitude. We had no idea what we would find but equally had no idea what we would miss seeing by turning off the radio. A true adventure! We readily agreed and took the dirt track less traveled by and that made all the difference.

Wildlife viewing really was sparse at first but not long into our journey we spied an animal in a brushy area that I just couldn’t identify at a distance. As we got closer, we realized it was a porcupine. African porcupine species are nocturnal and seeing one during the day is very unusual (To read more about North American porcupines, visit www.fltimes.com for my July 2019 column). We stopped the vehicle and tried to puzzle out exactly what was happening. Why would this individual be out in broad daylight? It didn’t take us long to learn the answer.

African porcupines live in underground burrows rather than in tree hollows. From a previously unseen hole popped the head of a hyena. And in the hyena’s mouth, was the head of a porcupine. Our porcupine sighting was due to a predator. Did the hyena chase this porcupine out of its hole or did this story start some time during the night with the hyena catching one porcupine above ground with another below? We will never know. But to witness this predator-prey interaction was an amazing experience.

We were not rooting for the predator, but we weren’t rooting against it either. We simply were witness to a natural event. There was no cheering or scorn. Our video recording of the day shows that we spoke mostly in awed whispers as the events unfolded. Here we were in one of the busiest national parks in all of Africa watching a drama play out with not another jeep in sight. We took a risk that morning and were rewarded handsomely. For the next several hours, our guide repeated numerous times: “You are a very lucky safari family.”

The hyena delicately ate the porcupine meat while trying to avoid the quills. The porcupine we originally spied stood stock-still. Once the hyena had eaten all he could, he returned to the hole and after a few minutes re-emerged dragging the rest of the 50-pound carcass clear of the hole. That was the cue for the other porcupine to retreat and it disappeared quickly underground. The hyena bit into the carcass and gulped down the meat quickly. But not fast enough! Soon four more hyenas came rushing onto the scene to try and steal the kill. The carcass was simply too large for one hyena to defend it in all directions at once and soon bits were being filched by the others. The action was fast and noisy, attracting the attention of several vultures that flew in and landed nearby, waiting their turn for leftovers.

Vultures are known as scavengers but most predators will also eat things they didn’t kill, stealing a meal when they have a chance. The hyenas had spotted the commotion of a single hyena feeding and came running. The vultures spotted the fracas caused by the fight over the carcass and flew in immediately.

Within five minutes of the vultures arriving, our guide whispered, “And now the lion …” Just coming into view on the horizon was a female lion running towards us. She had seen the vultures drop and knew what that meant. The hyenas spotted her too and all quickly moved away from the dead porcupine. The lioness arrived but didn’t know where the food was. She scanned back and forth with her head as she paced around in circles looking for the food she knew must be there. When she made a move in the wrong direction, the hyena closest to the carcass rushed to it, tore off a piece of meat and ran. The game was up then. The lion grabbed the rest and carried it off in the direction she came. She was followed by three hyenas still hoping for scraps of a kill they did not make in the first place.

The original hyena went back to the porcupine burrow and began digging. If he was going to eat a proper meal that day, he had more work to do. We sat there for another 90 minutes as the hyena worked. A porcupine wedged into an underground burrow must have a formidable defense. Finally, we had to give up and head back without ever learning the outcome. We had seen no other tourists that day, so not only had we witnessed an amazing natural event, we did so in absolute privacy. Our guide started the engine of the safari vehicle, causing the hyena to poke its head out for a look. A few small porcupine quills protruded from his face, betraying the below-ground life or death action we could not witness.

M’Tanganyika summed up the experience with an understatement that we still use in our family when things are going wrong: “It is not a good day to be a porcupine.”

Van Niel, an environmental conservation professor at Finger Lakes Community College, lives in Seneca Falls and enjoys exploring wildlife around the world as well as in his own backyard. If you have comments, Van Niel can be contacted at bears@flcc.edu.