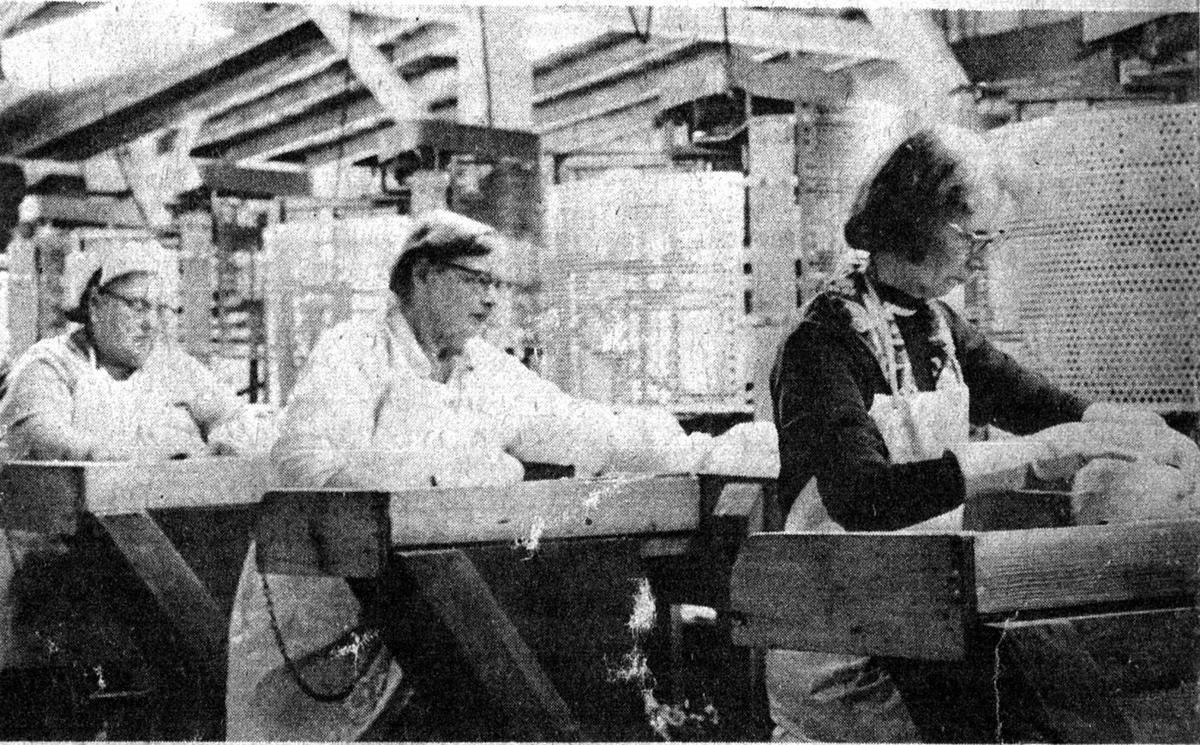 Employees work in the Seneca Kraut triming and coring room. 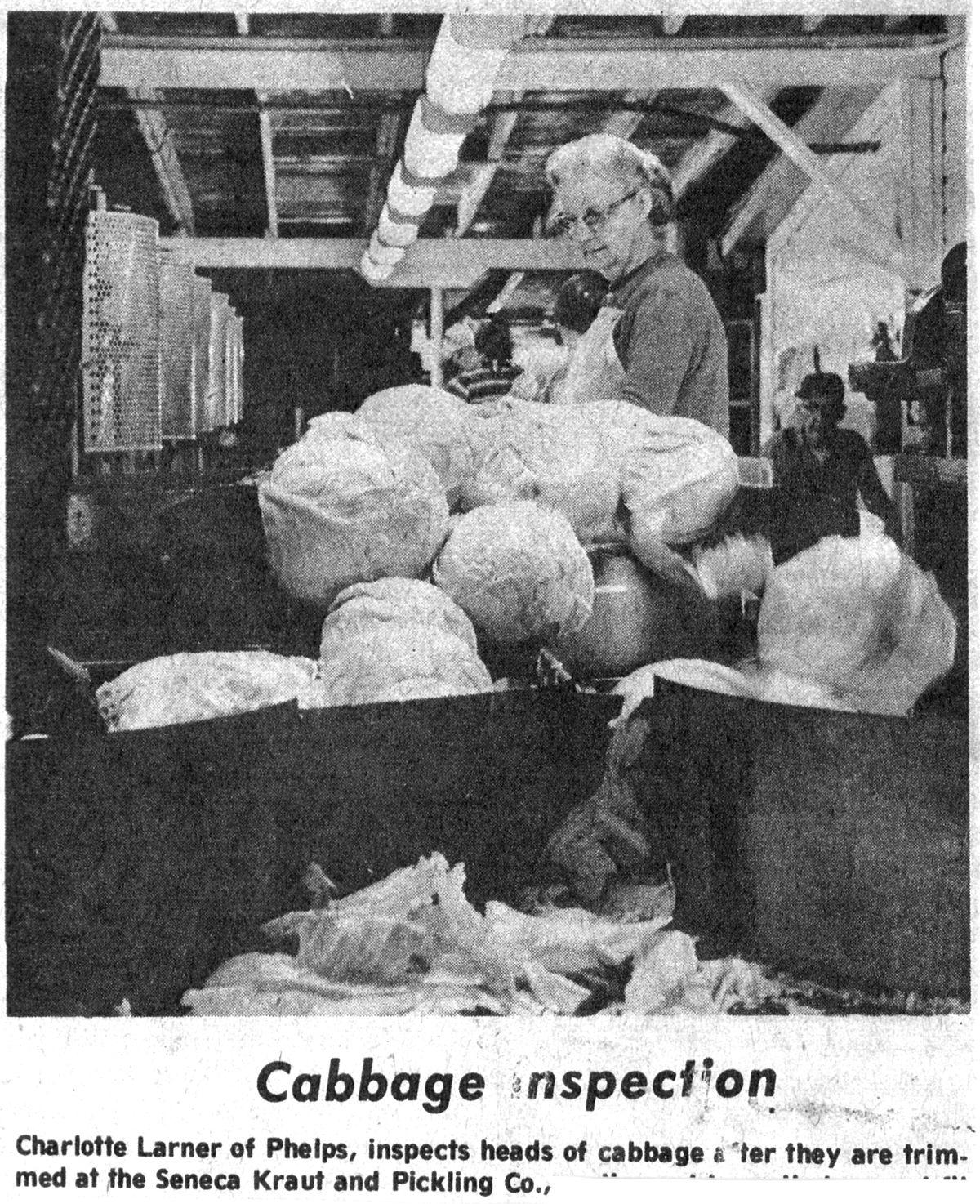 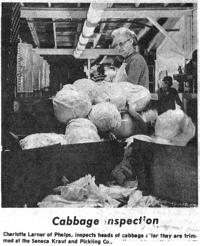 Charlotte Larner of Phelps inspects heads of cabbage after they are trimmed. 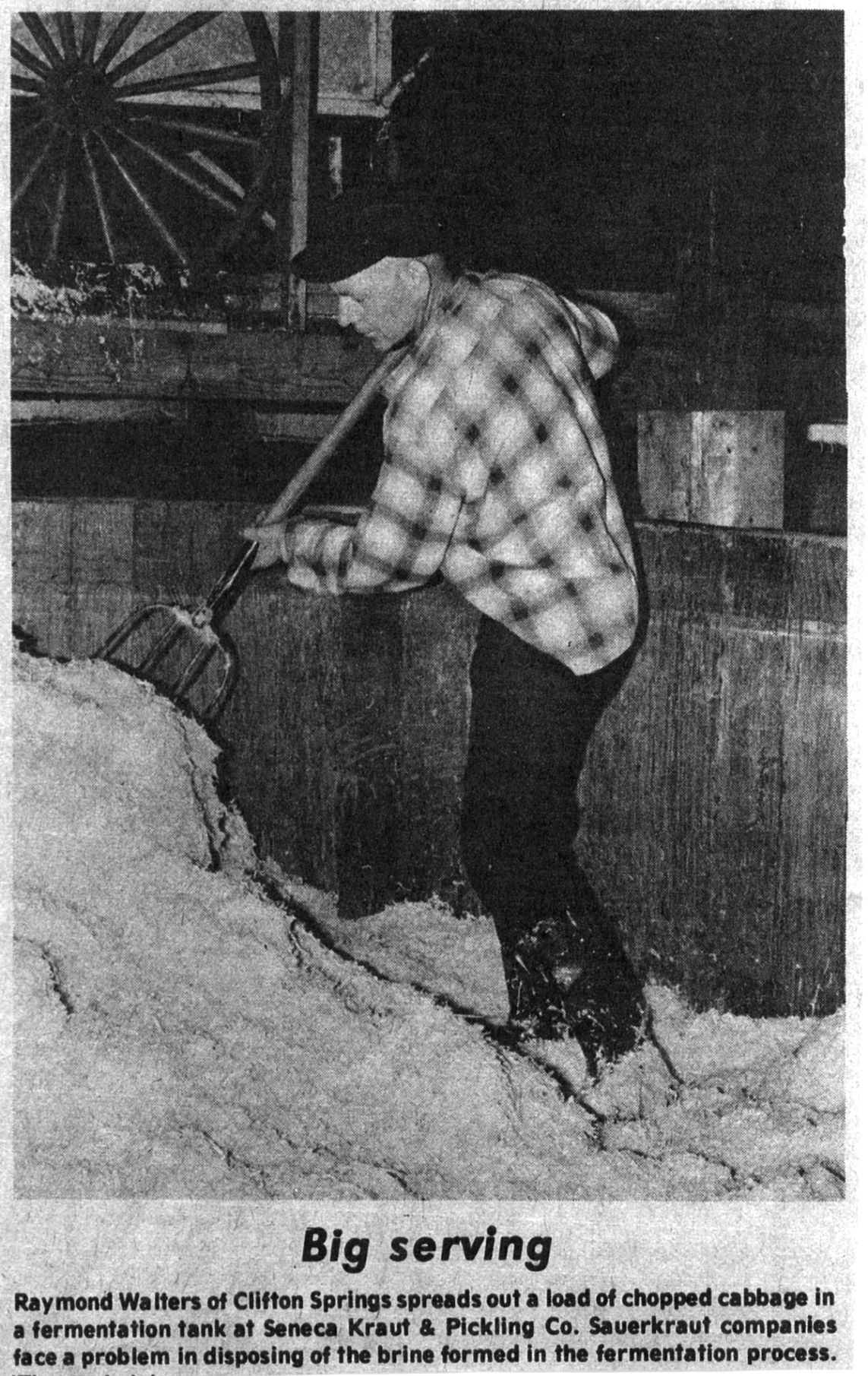 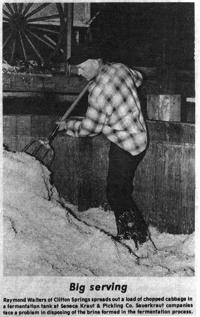 Raymond Walters of Clifton Springs spreads out shredded cabbage in a fermentation tank in this 1975 photo. 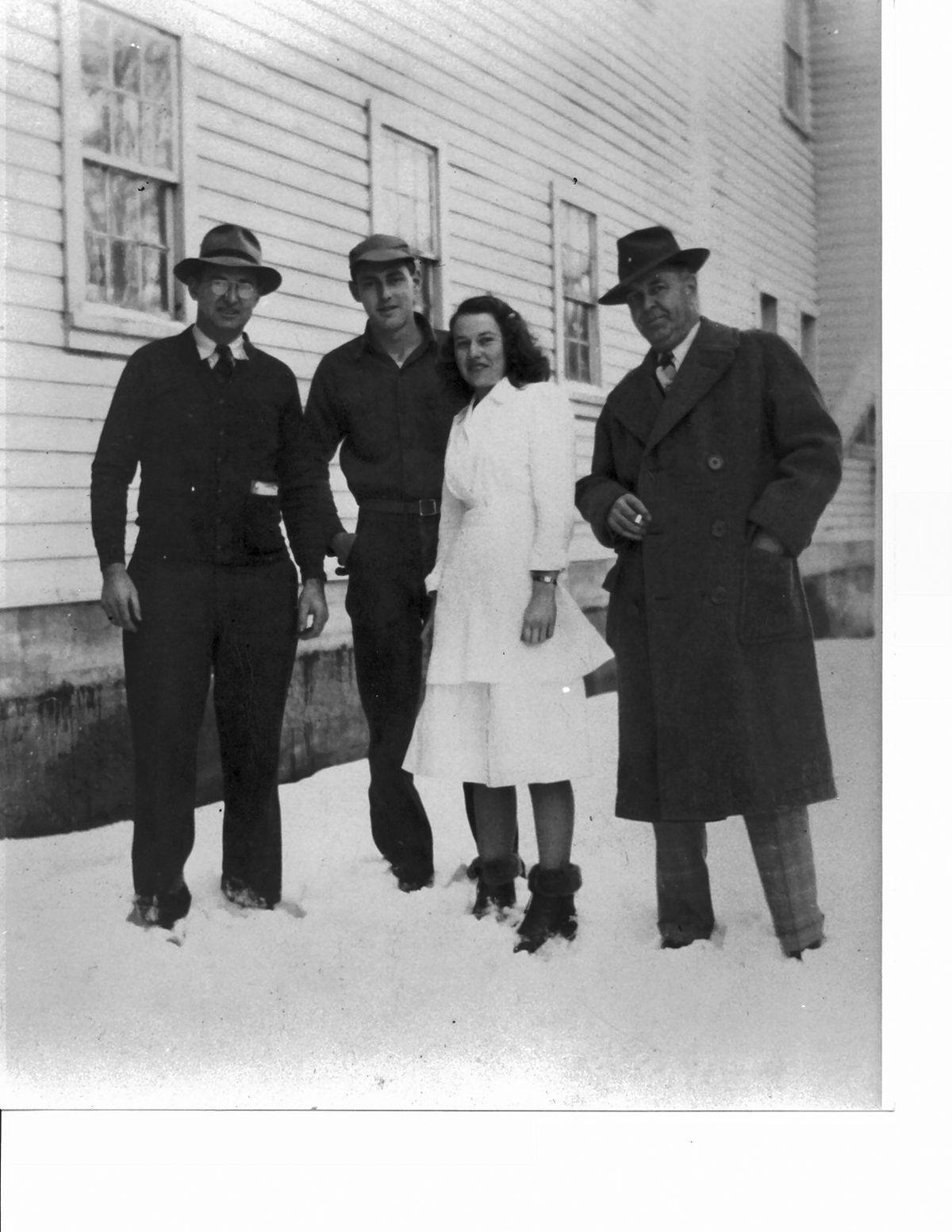 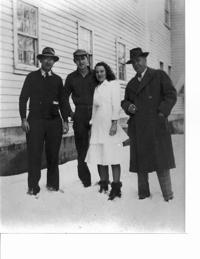 Employees work in the Seneca Kraut triming and coring room.

Charlotte Larner of Phelps inspects heads of cabbage after they are trimmed.

Raymond Walters of Clifton Springs spreads out shredded cabbage in a fermentation tank in this 1975 photo.

The village of Phelps has long been known as the “Sauerkraut Capital of the World.”

It all started in the early 1900s and survived until 1985, when the Comstock and Seneca Foods companies moved their operations (now called the Great Lakes Kraut Co.) to Shortsville. The village of Phelps started the Phelps Sauerkraut Festival in 1967, and it has been held the first Saturday in August ever since. This year marked the 50th anniversary celebration.

The village of Phelps had two sauerkraut factories. The one most familiar is the Empire State Pickling Co., Silver Floss. It was started by Burton Babcock, who came from Ohio where he had worked in a sauerkraut factory. He purchased the Empire State Pickling Co. on Pleasant Street, circa 1905. The operation was later moved to the present site on Eagle Street. The old Silver Floss water tower used to be a landmark before it was torn down.

The other factory was the Seneca Kraut and Pickling Co. The Seneca was established in 1902 in Waterloo by the Dillman brothers. Leland Alonson Colton — another sauerkraut entrepreneur from Skaneateles — purchased a fourth interest in Seneca Kraut and became secretary and manager of the Waterloo plant. The Seneca Company built a branch plant and factory in Phelps in 1907 and a third plant was built in Lyons in 1910. In 1917, Colton purchased an additional half interest in the Phelps plant, which had been owned by the Dillman Bros.

In 1922, Colton sold his half interest in the Lyons plant, which was then being run by the Castle Co. The Castle Co. took its name from Seneca Castle in the town of Seneca. In 1925, Colton purchased the remainder of the stock in the Phelps plant and became its sole owner. In 1929, Colton built other plants in Geneva and Leets Road in the town of Seneca. Geneva was the headquarters of the Seneca Kraut Co.

In 1938, the Seneca was purchased by the Flanigan family and run by Lon P. Flanigan Sr. Locally, Clifford Jones was the manager of the factory and ran the daily operations. Cliff, as he was called, lived on Eagle Street with his wife, Gertrude. Seneca employed a few full-time and many part-time employees. The part-time employees were needed during the fall cabbage harvesting season and also when the kraut was canned. Later in 1947 — after serving three years in the U.S. Army during World War II and graduating from Hobart College — Lon P. Flanigan Jr. became the assistant plant manager in Phelps.

The two factories were next to New York Central Railroad and they received box cars on their sidings, filled with several sizes of empty cans. These cans had to be off loaded by hand onto a conveyor system from the boxcar to a point of storage until they were needed for canning. The offloading was a tedious job and sometimes very hot in the boxcar, with little air circulation. Gloves were necessary to prevent getting cut on the sharp lips of the cans. The plant also shipped its canned kraut products to market via train, as well as by truck.

The Seneca Kraut Factory was at the west end of the village on the southwest corner of Route 96 and Newark Street on a one-acre, triangular-shaped lot. On the southeast corner was a small building that was used as the office and cabbage weigh-in station. My grandmother, Bertha Dratt Johnson, was the bookkeeper and did the weigh-ins until her death in 1944.

Cabbage was a big source of income for Phelps farmers and those of the surrounding areas. This crop required a strong back and a lot of muscle. In the early 1900s to mid-1940s, almost all the cabbage was transported by horse and wagons. The farmer first had to cut the cabbage head from the root stalk in the field and then he had to load the heads into the wagon using a long handled (two-tine) pitchfork, usually two heads at a time. Some heads could weigh as much as 15 pounds each, maybe more. Can you imagine lifting two of these over your head on the end of a long pitchfork? Then he would drive his team to the weigh-in station at the factory and then weigh out after unloading, to obtain the tonnage he had delivered.

The Seneca factory had a double storage shed. It was long and narrow — running east to west — and located across from the weigh-in station. The shed featured individual bins inside, and on the outside were two levels of long-hinged doors. If the inside bin was empty, the lower door was opened by hand. When it was full the upper door was then opened — this is where the farmer had to lift the cabbage over his head to fill the second level. A conveyor belt ran through the center of the storage sheds, where two or more workers would pitch the heads of cabbage from the bins onto the belt.

The belt ran up to the trimming and coring room on the second floor. Here, many women and a few men would strip away any bad leaves and remove the hard core of the cabbage. This was done on a drill-like machine with a very sharp drill-like bit with knives. Pieces of the core would fly all over as it was removed by the spinning cutter. This was one of the most dangerous operations. You had to pay attention or you could be severely cut! From the coring station the head went by conveyor belt to two large horizontal spinning shredders with blades about 3 feet in diameter for slicing the cabbage into shreds. The shredded cabbage then fell through to a waiting two-wheel hand cart (pushed by one or two men) below for transport to the vats.

There were usually two men in the vat wearing rubber boots as the carts dumped shredded cabbage into it; the men would spread the shredded cabbage around evenly in layers with pitchforks and then would cast approximately 20 lbs. pounds of salt from a pail by hand on top of each layer. Oh, and as the story goes, sometimes they would accidentally dispense a little tobacco juice from their chaw of tobacco. I don’t know if this helped the fermentation of the kraut or not! Not to worry, though. The kraut would be cooked prior to canning.

Once the 22-foot diameter by 20-plus foot high cypress vat was filled with about 7,000 pounds of shredded cabbage, a layer of cabbage leaves was put on top and then cypress boards covered it all up. Then, heavy cement blocks weighing about 100 pounds each (with two molded-in steel handles) were hoisted up and placed on top of the board to compress the shredded cabbage. This was a very time-consuming and labor-intensive process. In later years they used large plastic sheets to cover the vat and placed water on top as the weight. Here the vat set for about two months with its contents fermenting and secreting acidic brine.

Canning of the kraut

The brine in the vat would be drained and disposed of into large wells near Flint Creek (the wells sometime leaked into Flint Creek). As environmental regulations came into play, the waste treatment was performed at the 1955-56 sewer treatment plant, with some difficulty at first. The kraut was then taken to the cooking and canning room, where it was placed on a large stainless steel steam table to be cooked. There, several women and men with rubber gloves would pack as much kraut and juice as possible into each can. From there, the filled can had a lid affixed by a spinning process. (I don’t think that they ever weighed the cans). The cans were then placed in a cooker and the finished product would be stored until they had orders to fill, or sometimes they would go directly to the labeling and packaging department. Different labels were applied for each individual customer’s order. The kraut went out under many different labels such as Seneca, IGA, A&P and Rose.

The factory was heated by two coal-fired steam boilers that were attended by a man named Tim Welch. Welch and his family lived in the house a few feet away from the factory, just south of the NYCRR tracks where Haers’ cement stones and walls are now displayed. You could always see Welch sitting in his chair leaning back against the boiler room building with his corn cob pipe. The cinders produced by the burning of the coal were piled up across the road in front of the cinder block building. This building is still standing between Ives Ford (Blue Ribbon) and Haers’ new building. The town highway department would crush and mix these cinders with sand to be spread on the wintery roads.

These are a few people that I recall working at the Seneca Kraut factory while I was growing up in the West End. Henry Salisbury wore many hats — chief mechanic and designer, engineer and carpenter. Salisbury was a jack-of-all-trades so to speak, he was Cliff Jones’ right-hand man. Salisbury and his wife, Anna, and daughter lived in a little bungalow on the northeast side on Newark Street. Other employees included Earl and Millie Simmons, Floyd Lindstrom, Charlotte (Young) Larner, my great-uncle Arthur Johnson, Ike Hughson, Pete and Mary Raczenski and my grandfather Fred Johnson, before he died in the 1918 flu epidemic.

Cliff Jones and his wife, Gert, were killed in a car-train accident in 1984 on the Route 14 at Kashong Road crossing.

The Seneca kraut and pickling factory was demolished in 1994 and the site is now occupied by Windy Hill Flower Farm. The office and weigh-in station building had been removed sometime earlier to County Road 47 in Hopewell, south of Hopewell Center and County Road 4 Hopewell, and was converted into a home.

There was one other smaller sauerkraut factory in the town of Phelps; it was the McIvor Sauerkraut Factory on McIvor Road and Pre-Emption Road (County Road 6). The factory was operated by the McIvor family (Alice McIvor) until it closed. It now houses a ceramics business.

Johnson is a lifelong resident of Phelps who was born across the street from the sauerkraut factory. He is interested in genealogy and local history and is currently gathering information about Ontario County Civil War soldiers.