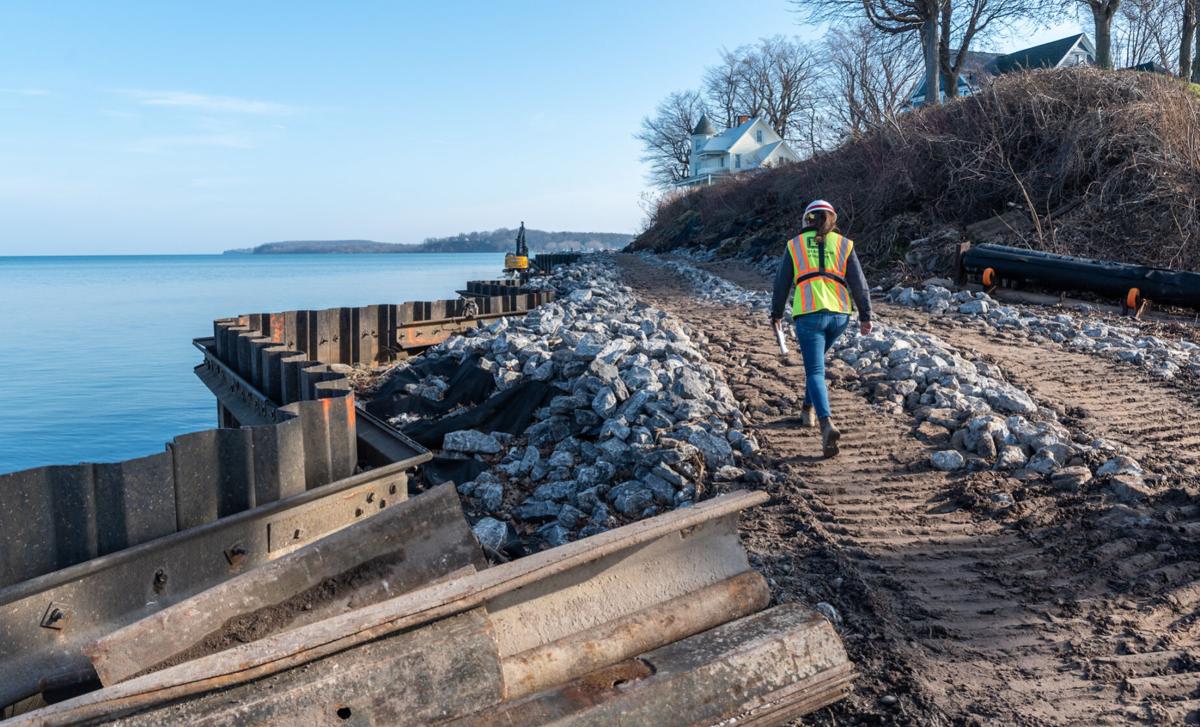 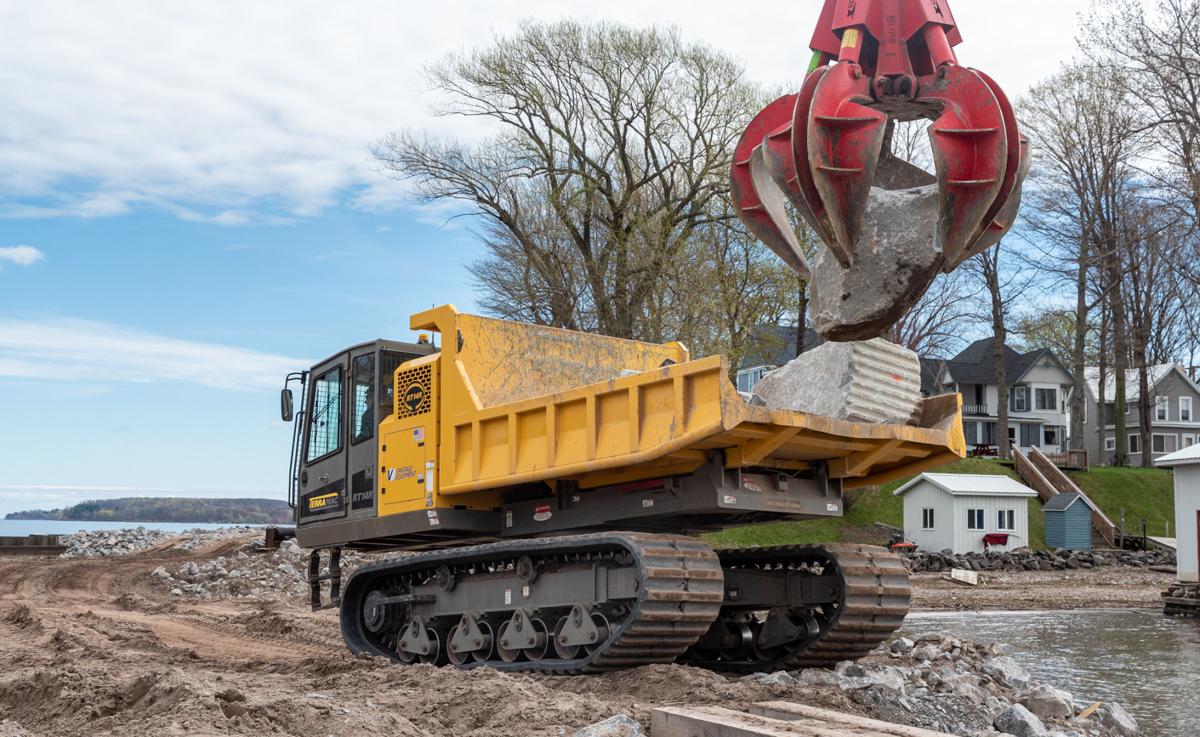 The massive stones used as part of a breakwater repair project at Sodus Point are loaded onto this heavy duty vehicle.

The massive stones used as part of a breakwater repair project at Sodus Point are loaded onto this heavy duty vehicle.

SODUS POINT — In 2017, U.S. Sen. Charles Schumer went to this Wayne County village — whose economy and quality of life are largely connected to its waterfront — to urge the Army Corp of Engineers to repair a breakwater designed to protect Sodus Bay from the sometimes-turbulent and sometimes-high waters of Lake Ontario.

The U.S. Army Corps of Engineers Buffalo District and its contractor, Michigan-based Great Lakes Dock & Materials, announced that repair work to the east breakwater in the bay is complete.

The Corps of Engineers said the $3.86 million project, which started in the fall of 2020, was completed May 19. The work involved repairing 525 feet of the Charles Point steel sheet pile wall that provides protection to the shoreline east of the east breakwater, which the Corps of Engineers noted is “critical to reduce the rate of erosion.”

The Corps’ Buffalo District received $4.5 million in federal funding to construct the project in April 2020.

Schumer is pleased to see the work finished.

“That’s why I was proud to deliver the much-needed $4.5 million for the Army Corps of Engineers to repair and rebuild the Charles Point break wall. Now the repaired wall will serve as a shield, improving resiliency along the Lake Ontario shoreline, protecting Sodus Bay, and ensuring the safety of our community and their families.”

Added Lt. Col. Eli Adams, the Buffalo District commander: “Completing the work at Charles Point is an example of the Corps of Engineers honoring its commitment to provide safe navigation and build a more resilient Lake Ontario shoreline.”

Adams thanked Congress, and in particular Schumer, for prioritizing funding for the project. And he also thanked the Charles Point Association “for helping us understand the localized impacts.”

However, the work to protect Sodus Bay is far from finished. Under Gov. Andrew Cuomo’s Resiliency & Economic Development Initiative, or REDI, work is planned to protect Crescent Beach, a 1.5-mile-long barrier bar beach that, with the repaired breakwater, protects Sodus Bay from wind, waves and ice from Lake Ontario.

Record-high water levels in Lake Ontario in 2017 and 2019 and wave action caused significant flooding and erosion along Crescent Beach, resulting in loss of property, trees and vegetation, the displacement of material from the barrier beach into Sodus Bay and the barrier beach being breached.

According to the Wayne County Soil and Water Conservation District, the “primary objective of the Crescent Beach Resiliency and Economic Development Initiative Project is to design and construct a natural or nature‐based shoreline stabilization system that will protect Crescent Beach from Lake Ontario wave action and enhance the overall resiliency of the barrier beach.”

After studying a number of plans to protect Crescent Beach, engineers have chosen to create offshore barrier rock reefs to reduce wave energy that reaches the shoreline.

That work is expected to start in October and be finished in 2021.

There are other REDI projects either completed or in progress, including sand dunes built at the beach at Sodus Point to protect the shoreline from high waters, as well as stormwater and drainage projects designed to mitigate future Lake Ontario flooding. Additional shoreline fortifications to protect against high bay waters have also been built.