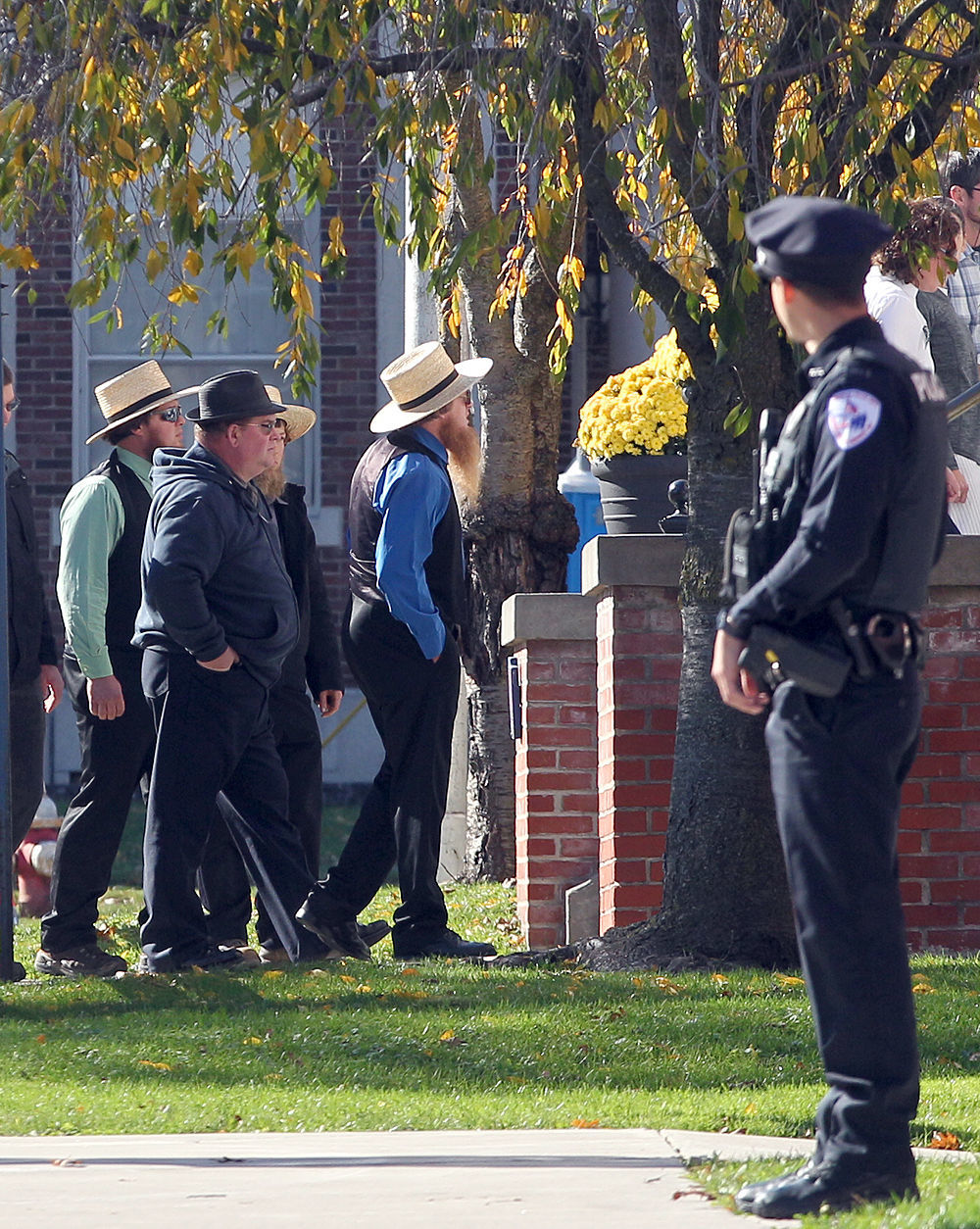 In this file photo, members of the Amish community file into the Seneca County Courthouse last month for a state Supreme Court hearing on an Amish man’s lawsuit that sought to overturn New York’s new ban on religious exemptions that allowed unvaccinated children to attend school.

Attorney James Mermigis, who calls the legislation an affront to religious freedom, was highly critical of Doyle’s decision. He called it, among other things, “an atrocity.”

The bill was passed by the Legislature in June following a measles outbreak downstate.

Mermigis argued in state Supreme Court in Seneca County and in his court filings that the repeal is unconstitutional because it violates the Free Exercise Clause of the New York State Constitution.

The Seneca County case is centered on unvaccinated children at Cranberry Marsh School — a private, Amish-run school in Romulus where plaintiff Jonas Stoltzfus’ three children attend. The father said they are not allowed to attend the school now without the required vaccinations, which he said violates his religious beliefs.

Mermigis claimed the state is taking action to close the school as well.

The state Attorney General’s Office in Rochester, presenting on behalf of the state, has argued that the state legislation was reasonable in light of the public health threat from outbreaks such as measles.

In his ruling, Doyle cited state Court of Appeals decisions as some of the main reasons for denying the temporary injunction.

Doyle writes in a ruling he issued Nov. 4 that “in evaluating the constitutionality of a legislative enactment, the Court of Appeals instructs that ‘nothing but a clear violation of the Constitution will justify a court in overruling the legislative will’ and that ‘every statute is presumed constitutional, and every (intent) is in favor of its validity.’ Further, the court is required to apply the ‘presumption that the Legislature has investigated and found the facts necessary to support the legislation.’”

Doyle disagreed with Mermigis’ argument that the legislation violates the Free Exercise Provision of the state Constitution, saying that public health law is a valid exercise of the state’s “police powers.” Additionally, Doyle wrote, “the plaintiffs have failed to meet their burden of clear and convincing evidence that the repeal of Section 9 (the removal of the religious exemption) was an ‘unreasonable interference’ on their religious freedom. Therefore, the plaintiffs have not demonstrated a likelihood of success on the merits to (urge) the repeal of Section 9.”

Mermigis said he was “appalled by his decision. He never mentions the word Amish in his decision and shows a callous disregard to the longstanding religious beliefs of the Amish. In my opinion, he did not want this case in his courtroom. I believe he took the easy way out and there was no analysis in his decision. Judge Doyle showed a lack of respect towards religion in his decision. The Amish who fled to America to escape religious persecution are now being persecuted in New York state. The decision was an atrocity.”

The attorney added that the “Amish have their own schools and they are secluded from everyone else.”

Mermigis had argued — and lost — a similar case in Steuben County. There, Jocelyn Sullivan-Knapp previously had obtained a religious exemption for her two children to attend school without being vaccinated. His request for a preliminary injunction against the law was rejected by Acting Supreme Court Justice Robert Wiggins, according to the New York Law Journal.

In court last month in Waterloo, Mermigis called the state legislation a “repugnant law” that violates religious freedoms, adding that it has forced parents to “give up their religious beliefs or home-school.” He said the law left more than 26,000 students who had the exemptions to either receive their shots or be home-schooled. Additionally, Mermigis claims that “most vaccines” were developed with help from aborted fetuses, and that fetal cells remain.

According to the Immunization Action Coalition’s website, the “production of a few vaccines, including those for varicella, rubella, and hepatitis A, involves growing the viruses in human cell culture. Two human cell lines provide the cell cultures needed for producing vaccines; these lines were developed from two legally aborted fetuses in the 1960s. These cell lines are maintained to have an indefinite life span. No fetal tissue has been added since the cell lines were originally created.”