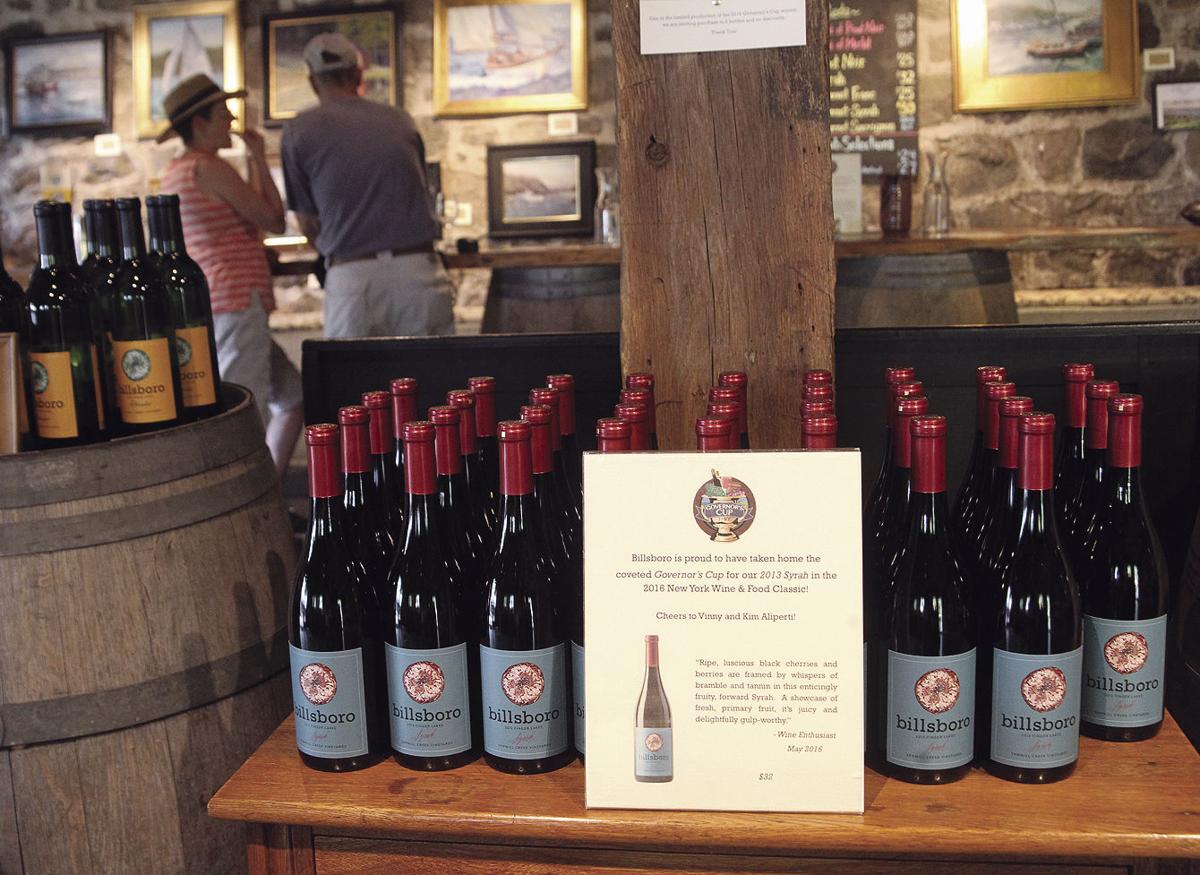 Award-winning wines are on display and available for purchase in the Billsboro Winery tasting room. 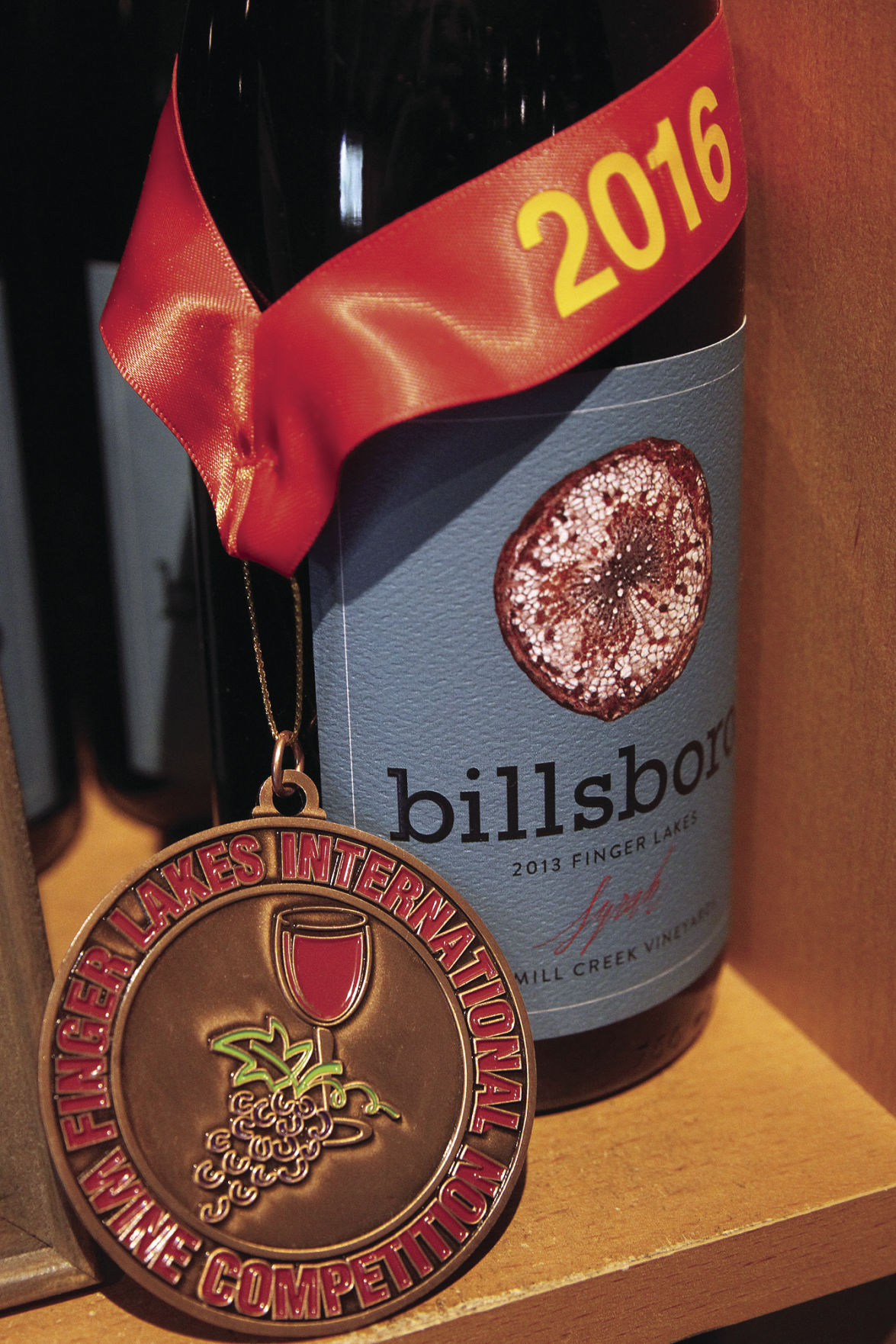 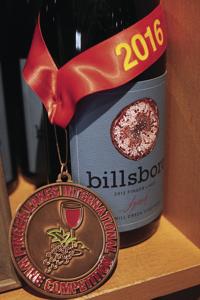 Award-winning wines are on display and available for purchase in the Billsboro Winery tasting room.

We all know that decisions — made and unmade —can shape the course of our future.

For winemakers, those decisions are many.

For Vinny Aliperti, winemaker and co-owner of Billsboro Winery on the west side of Seneca Lake, decisions he made two and three years ago have led to glory in the late summer of 2016.

“There’s so many decisions in winemaking, and every little one has consequences,” Aliperti said the other day. “It’s a culmination of a million decisions.”

Aliperti was talking about Billsboro’s 2013 Syrah, which recently became the fifth different Finger Lakes wine in five years to win the coveted Governor’s Cup, emblematic of New York state’s “Wine of the Year.”

The summer of 2013 was a pleasant one, but even more important for area grapes, September and October that year were warm and very dry.

“The weather cooperated and allowed the grapes to ripen to their full potential,” Aliperti said.

The syrah grapes were crushed and the wine basically made and aged in barrels. A year later, a few weeks before bottling it in August 2014, Aliperti tasted it as he always does and made the decision that would transform it from a very nice little vintage to an award-winning one.

“I realized the wine needed some help,” he said. “It needed a little more backbone, more structure, more mouth feel.”

The winemaker and his crew decided to blend the syrah mixture with 15 percent cabernet sauvignon. Nothing unusual there, Aliperti said, because he normally uses cab sauv as a blending grape with the syrah. What was different, though, was the percentage — he usually blends it with about 3 to 5 percent cab sauv, not 15.

Tasting that blend, Aliperti said he knew he had hit on something that at least had a wonderful taste and body.

“We found a very suitable blend,” he said. “Did I know it was a Governor’s Cup winner? Of course not, but we felt like it was a good effort. It’s always hard to know. We certainly had high hopes, but we have high hopes every year.

“You have to be kind of the eternal optimist.”

(Oh, by the way, a wine can still be called a certain varietal so long as there is at least 75 percent of it in the blend.)

But that is how Aliperti, who began working with wine as an apprentice on Long Island in 1997, became a Governor’s Cup-winning winemaker for the first time 19 years later.

Jim Trezise, the president of the New York Wine & Grape Foundation, summed it up this way: “Winning the Governor’s Cup — which recognizes the best of some 900 New York wines — is a major accomplishment, but doing so with a Finger Lakes syrah is absolutely stunning.”

Aliperti learned about making wine from his father, who was born in the Campania region of Italy near Naples and came to the United States when he was about 10. He also is the head of winemaking operations at Atwater Estate Vineyards and has been working with syrah since 2007 with grapes grown by the Hazlitt family at Sawmill Creek Vineyards on the spectacular slopes of southeast Seneca Lake.

His wife, Kim, co-owner at Billsboro and the operations manager there, says the varietal always has been a special favorite of theirs.

“It has a nice jammy quality to it that doesn’t express itself like some of the others. It’s got a great peppery burst at the finish. It’s a very soft wine that pairs with anything from wood-fired pizza to prime rib,” she said.

Kim added that sales of the 2013 Syrah — which interestingly was released only about five weeks ago — have been booming, especially since the award was announced on Aug. 10. At $32 a bottle, it is the winery’s highest-priced wine, but 220 cases were bottled and only about 120 remain.

In other words, if you want some, get it quickly. Billsboro is about five miles south of Geneva on Route 14.

“This beautiful wine is a tribute to the grape growers as well as the winemaking, and to years of research and experimentation that continue to transform the Finger Lakes into a world-class wine region,” said Trezise. “Once it was thought that classic European (vinifera) wines couldn’t be made here, then that the Finger Lakes was destined to remain exclusively a white wine region, but now the reds are reflecting the same commitment to quality.”

And that, to me, is the exciting thing for Finger Lakes wine aficionados. Long known for its whites — especially sparkling wines, ice wines and rieslings — the region has begun turning heads with reds.

Since the Governor’s Cup competition began in 1986, Finger Lakes wines have won the title at least 24 times, according to Wine & Grape Foundation records, but only five times has it been for a red wine.

However, the last two Cup winners — a 2011 Lemberger from Ventosa last year and now Billsboro’s 2013 Syrah — mark the first time that those specific varietals have been honored.

“We’ve been hearing this for 25 years, ‘Oh, all you guys make is sweet wines, white wines,’ and now that finally is sort of clearing up,” Vinny said. “I think because there’s been such a critical mass of high-quality wines and all the awards and accolades, people are finally waking up to understand this is a serious region with some serious wines.”

A large part of that was due to the work done decades ago by pioneers such as Hermann J. Wiemer and Dr. Konstantin Frank, who recognized that certain varietals of red wine grapes could survive and thrive in the cool climates of upstate New York. That work has been carried on by some of the area’s new breed of winemakers, like Aliperti.

The syrah grape actually is something of a two-way player, though, successfully being grown in both warmer regions — in Australia, for example, where it is known as shiraz — and in cooler zones such as the northern Rhone region of France ... and now the Finger Lakes.

“I feel like there’s been some naysayers, but I’ve been one of the supporters of syrah,” Aliperti said. “Now I know we’re going in the right direction.”

“Syrah is a grape generally associated with hot climates,” Trezise said. “But Vinny Aliperti just proved that a cool-climate version can be both rich and elegant.”

Aliperti, like any good winemaker, gives huge kudos to the growers of his grapes, Eric and Tina Hazlitt at Sawmill Creek, who are continuing on the work that Eric’s father, Jim Hazlitt, began. They source grapes for a number of area wineries, including the syrah for Billsboro.

“They’ve always been forward thinking, more progressive growers, taking more chances on grapes than maybe others,” Aliperti said. “I think the big reason they took the chance on the syrah is because their site is such a unique one, very close to the lake, great drainage with those deep slopes. It’s really a treasured ... desirable site.”

Their yeoman’s work in the field is “not very romantic stuff,” Aliperti said, but it is vital to the wine’s success.

Whatever the confluences — and decisions — that resulted in this latest award winner, the best news is that it may be a bellwether for area red wine fans.

The Alipertis have owned Billsboro since 2007, and Trezise said he is excited for them on a personal level, too.

“This couldn’t happen to nicer people,” he said. “Vinny and Kim are not only talented and committed, but collegial in every possible way. I am proud of them and grateful for the way they have advanced the reputation of the Finger Lakes.”

Kim, meanwhile, in typical low-key fashion, deflected the praise back to the red liquid in the bottle.

“It couldn’t have happened to a nicer wine,” she said.

Mike Cutillo is the Times executive editor. Contact him at 789-3333 Ext. 264 or mcutillo@fltimes.com.

LEGAL NOTICE Notice of formation of A Safe Place Self