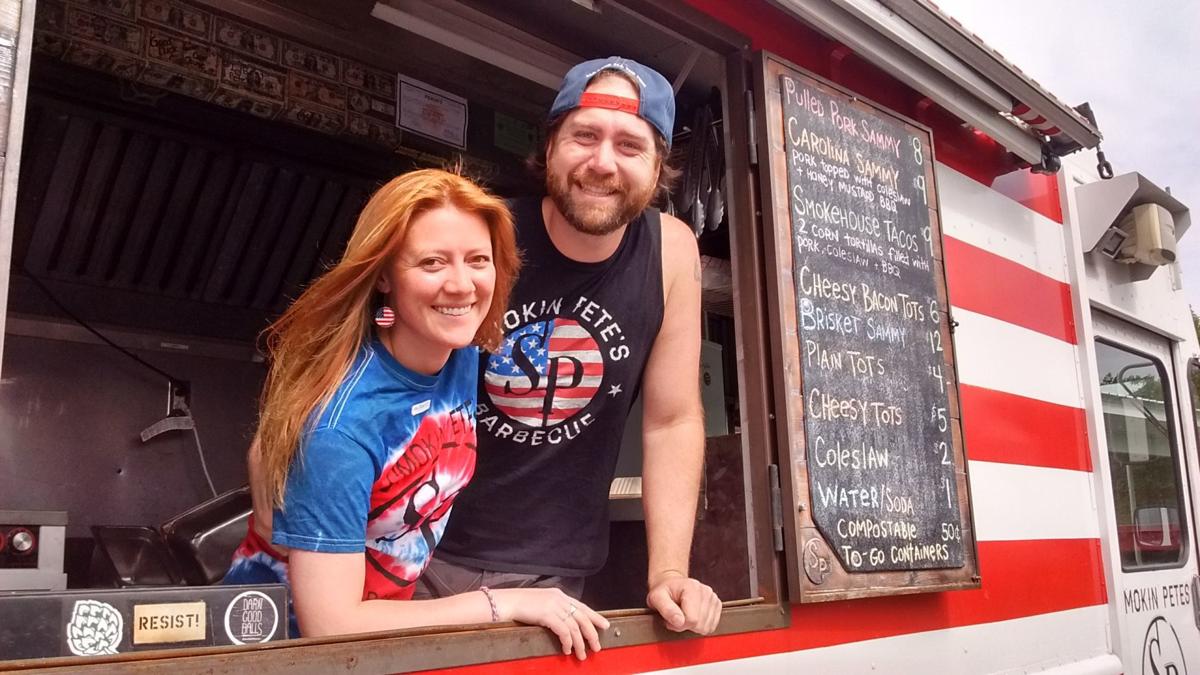 Pete Chapman and his fiance, Maeve Beecher, are the owners Smokin’ Pete’s Barbecue. 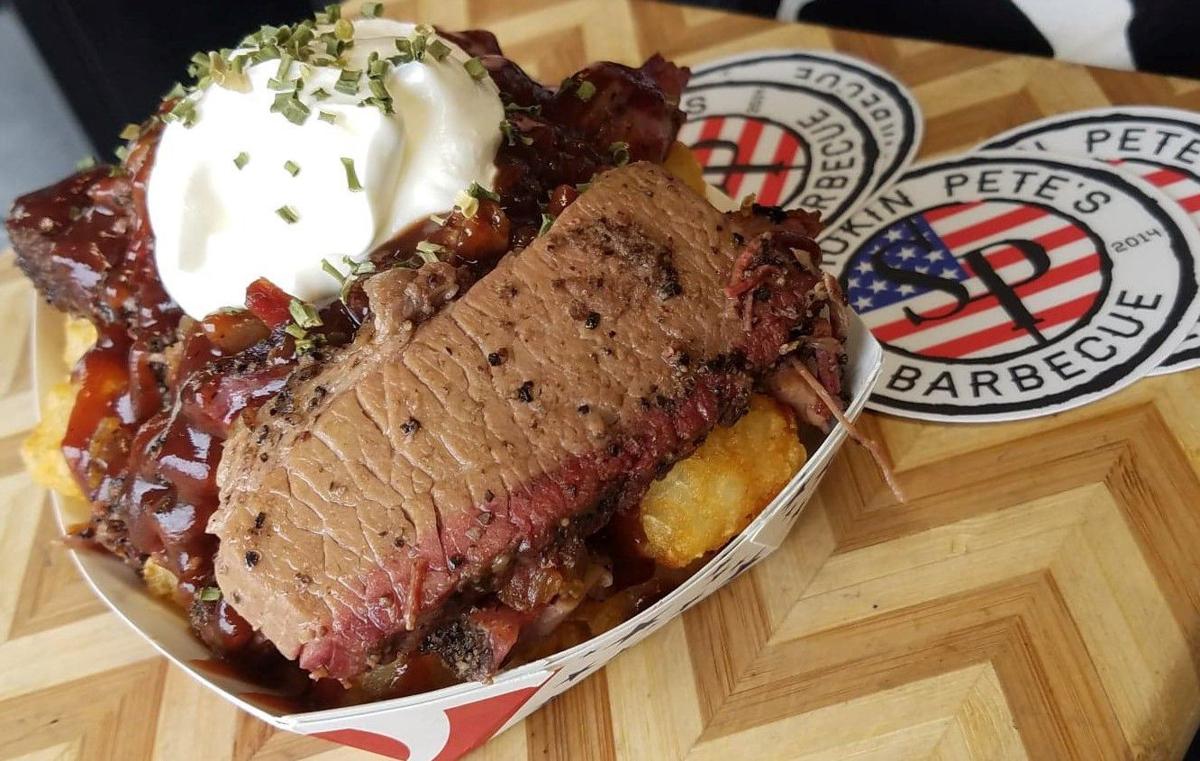 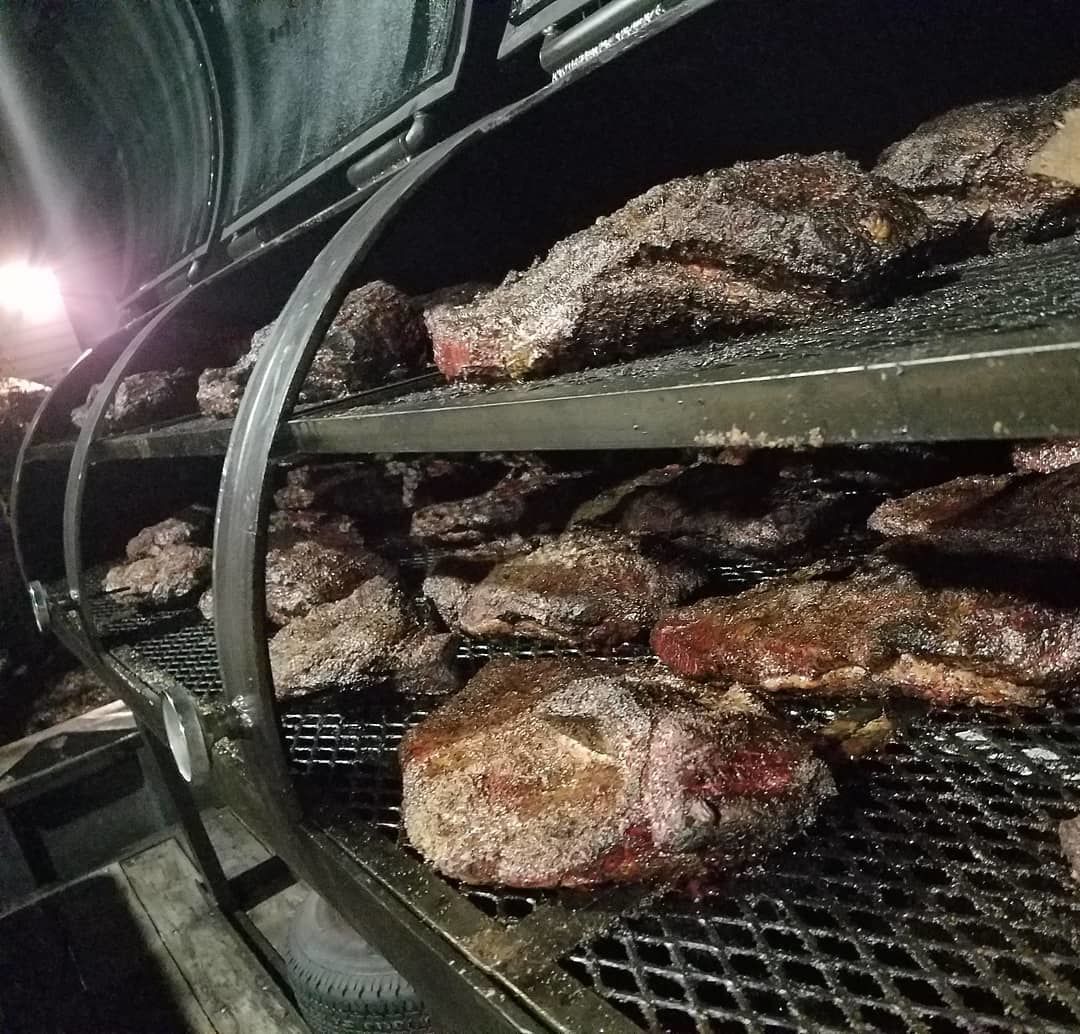 Brisket is seen on Smokin’ Pete’s smoker, which owner Pete Chapman made himself. 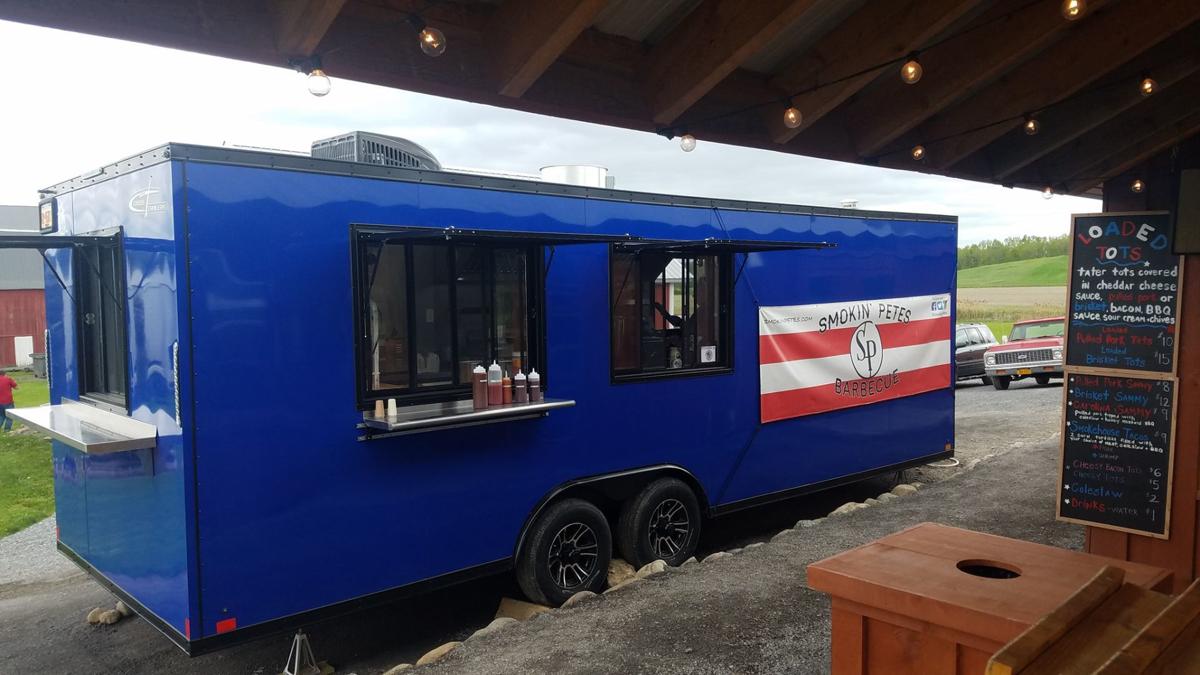 Pete Chapman and his fiance, Maeve Beecher, are the owners Smokin’ Pete’s Barbecue.

Brisket is seen on Smokin’ Pete’s smoker, which owner Pete Chapman made himself.

TORREY — Pete Chapman’s job in the Air Force was to load bombs on A-10 “Warthogs,” as they are affectionately called.

Now, his task is barbecue — and a lot of people think his stuff is the bomb.

Chapman and fiancée Maeve Beecher own Smokin’ Pete’s Barbecue, which is in its fourth year of serving up barbecue brisket, pork and tasty sides out of their food truck at festivals and public and private events in and around the Finger Lakes region. For those who might be missing Pete’s barbecue road show, Chapman and Beecher have a new, fixed position at Climbing Bines Craft Ale and Hop Farm on Hansen Point Road, where they’re serving out of a snazzy new trailer they outfitted themselves.

After getting out of the Air Force in 2011, Chapman was wondering what to do with his life. The Churchville native, who’d dabbled in barbecuing since high school — “I had a little teeny smoker,” he said — decided to take a welding class in Rochester. There, the beginnings of Smokin’ Pete’s Barbecue were born.

“In that class as my final project, I built my first smoker,” he said.

After completing his welding education, he landed a job with internationally known sculptor Albert Paley. On the side, Chapman developed his barbecue skills, first for friends, then for private parties and music festivals.

Eventually, Chapman purchased a 2000 Chevy van that he turned into a food truck.

He and Beecher even painted the U.S. flag on it in appropriate proportions.

They invested about $17,000 in the truck, which is far less than most people spend to get into the business.

Climbing Bines is Smokin’ Pete’s operational base, and where the meats are prepared. Now they’re serving up food at the brewery each week on Fridays, Saturdays and Sundays.

“We’ve had our food truck here off and on,” said Chapman, noting that Smokin’ Pete’s made its debut May 24.

“Pretty much every weekend we’re doing two things at once,” he said.

While Chapman was a mostly solo act during the early years of Smokin’ Pete’s, Beecher, a business and geography major at State University at Buffalo, soon joined him. She left her job at a remediation-mapping business based at the former Griffiss Air Force base in Rome to join her fiancé.

Beecher also comes with a food background: She worked at a restaurant her father, Lyman Beecher, ran in Penn Yan for three decades.

The couple said most people don’t realize how much work goes into wood-fired smoking. Some, said Chapman, are using gas smokers now and just throwing in some wood to provide the smoky flavor.

Not Chapman and Beecher.

“It’s not the same,” he said. “I want to be a purist with the wood-fired (smoker). I think there is a huge quality difference with wood. It’s just better. It’s more tender. It’s done right.”

“Every hour and half you’ve got to throw wood on the fire,” he said, explaining that he and Beecher trade off on the duties, sometimes driving from their home in nearby Dresden and sometimes napping on-site.

Chapman said some part-time workers are pitching in as well on fire watch.

He explained that wind and rain can affect smoker temperatures.

And, while people go crazy for their many potato “tot” offerings — their Loaded Tots were the People’s Choice at a 2015 food truck competition at the Great New York State Fair — Chapman knows what Smokin’ Pete’s bread and butter is, so to speak.

“For me, it’s about our meats and the brisket,” he said.

However, the brisket, a tough cut of meat, can be a challenge for the novice smoker and pros alike.

“Brisket is not forgiving,” he said. “It can be very difficult to cook.”

Chapman said he and Beecher have altered their approach to seasoning brisket.

“I tell everyone I’ve simplified and modified,” he said. “Now it’s just salt and pepper, like Texas.”

They also use a simple rub for their ribs and chicken, said Chapman, who added that Smokin’ Pete’s is getting into Texas-style smoked beef sausage too.

At Climbing Bines, they’re looking to stretch the menu a bit with their new food trailer.

“This is going to be our test kitchen,” he said, noting that they are working on a burger for the brewery.

While they still haven’t dismissed the idea of a brick-and-mortar restaurant some day, Chapman and Beecher love what they’re doing — even with the long hours and lousy sleep.

“We meet a lot of really cool people,” Chapman said. “It’s exhilarating to have a line of people waiting for your food.”

“We put out a good product,” Beecher added.

Location: Based at Climbing Bines Craft Ale and Hop Farm, 511 Hansen Point Road, Torrey; on the road weekdays and weekends at events around the Rochester-Finger Lakes region