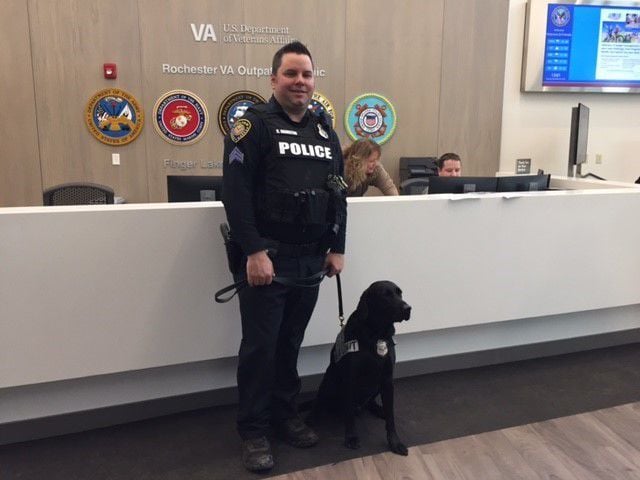 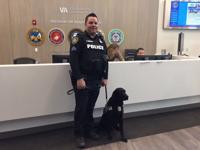 Sgt. Chris Hamilton is seen with his canine partner, Sampson, at the Rochester VA Outpatient Clinic. Sampson is trained to detect narcotics at the Canandaigua VA Medical Center and Rochester site. 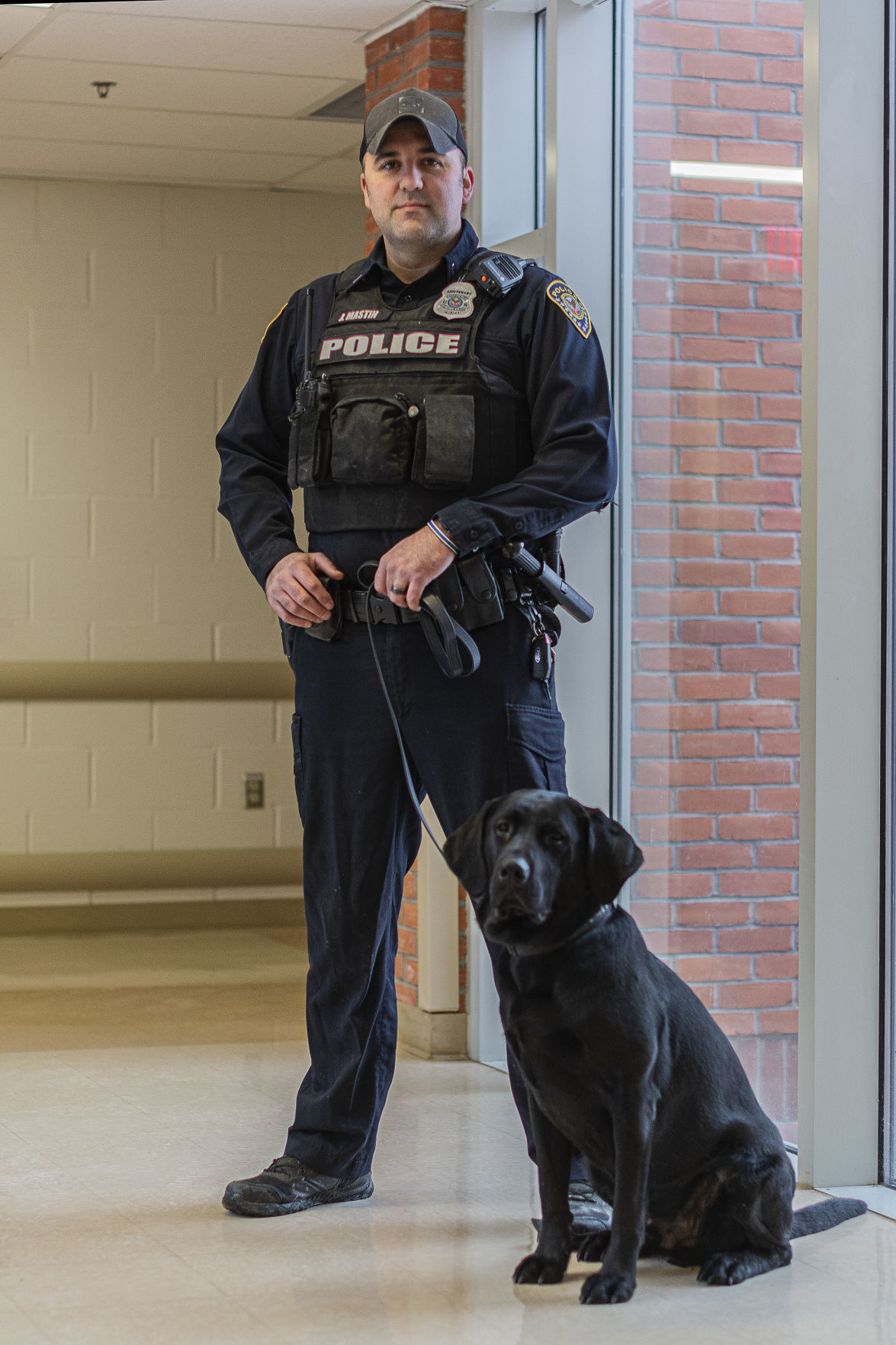 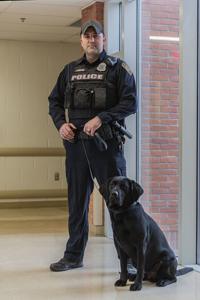 Lt. Jeff Mastin is seen with his canine partner, George, at the Bath VA Medical Center.

Sgt. Chris Hamilton is seen with his canine partner, Sampson, at the Rochester VA Outpatient Clinic. Sampson is trained to detect narcotics at the Canandaigua VA Medical Center and Rochester site.

Lt. Jeff Mastin is seen with his canine partner, George, at the Bath VA Medical Center.

CANANDAIGUA — If your image of a drug detection canine is a large, aggressive dog — perhaps a German Shepherd — that barks loudly after picking up the scent, you may be surprised if you visit the Canandaigua VA Medical Center.

Instead, you will see a Labrador Retriever — and a friendly one at that — that has found illicit drugs more than a dozen times.

“We have some veterans who are recovering addicts ... and we want to keep drugs off the VA campus,” said Sgt. Chris Hamilton, a member of the VA Finger Lakes Healthcare System Police Department, which includes the Canandaigua and Bath medical centers, and Rochester VA Outpatient Clinic. “We want veterans to come to a safe environment.”

Since the end of 2016, Hamilton and his canine partner Sampson, a 4-year-old black Lab, have been doing just that. At the Bath VA, Lt. Jeff Mastin has been patrolling with his canine partner George — who is just 8 months old — since last August.

“We are not finding large amounts of drugs, but on occasion we find small amounts and people are selling,” Mastin said. “It’s not just veterans. It could be employees and/or visitors. There are illegal narcotics at VA facilities and we are trying to keep them out.”

Kathleen Hider, public affairs officer at the area VA centers, said Sampson and George — with their keen sense of smell — can scan a room for illegal drugs and paraphernalia quicker than police can search the room.

“The Bath and Canandaigua campuses are huge, with a lot of parking lots and a lot of land. There are a lot of ways to get in and out of buildings,” Hider said. “The dogs help police cover a lot of ground without a lot of manpower.”

Sampson and George are certified to detect narcotics, and get monthly training and annual certification. They each have a special vehicle to get around campus.

Since late 2016, Sampson has responded to nearly 70 drug-related calls at the Canandaigua and Rochester sites and found drugs on 14 occasions. George has found drugs five times since August.

Hamilton and Mastin work with Kent Strege, chief of the VA police system, on the program.

“When the dogs are walking around it’s a psychological deterrent. The public knows what the canines are doing. It’s been all over TV,” Mastin said. “When we are walking through a room or by a vehicle, the dogs alert us to the presence of drugs ... and we may find them in bags or purses. We talk to the person and can charge them like other police officers would. The charge depends on the amount of drugs.”

“It’s usually a small amount of drugs — a joint or some paraphernalia with residue in it. We are not finding kilos here,” Hamilton added. “Basically, what we are worried about is heroin and fentanyl. People are overdosing and dying from that stuff, and that is happening on VA campuses as well. We want these people on a path to a healthy lifestyle. Our goal is not to find these drugs and bust veterans.”

Hamilton said about 30 VA centers nationwide have drug detection dogs. To his knowledge, the only ones in the northeastern U.S. are Sampson and George along with a canine at a VA near Poughkeepsie and another in New Jersey.

The dogs live with their handlers and families.

“Our families love them,” Mastin said. “When George and I get home at night, my 2-year-old runs right past me to the dog.”

Mastin added that George, whose nickname is “Snitch,” also is trained to track people who may wander. There is a long-term care facility at the Bath VA, and while a resident wandered away recently they were found before George was needed.

Hider and Hamilton said because of their breed, the dogs also are a calming influence for a veteran who may be agitated for any reason.

“If they are really amped up and if the environment is safe and appropriate, I will bring Sampson into the room with me and things immediately change. Sampson will go lick his or her hand, and get them to the level we need them to be,” Hamilton said. “It automatically brings a smile to their face. It will very often turn an angry or upset veteran into a happy veteran.”