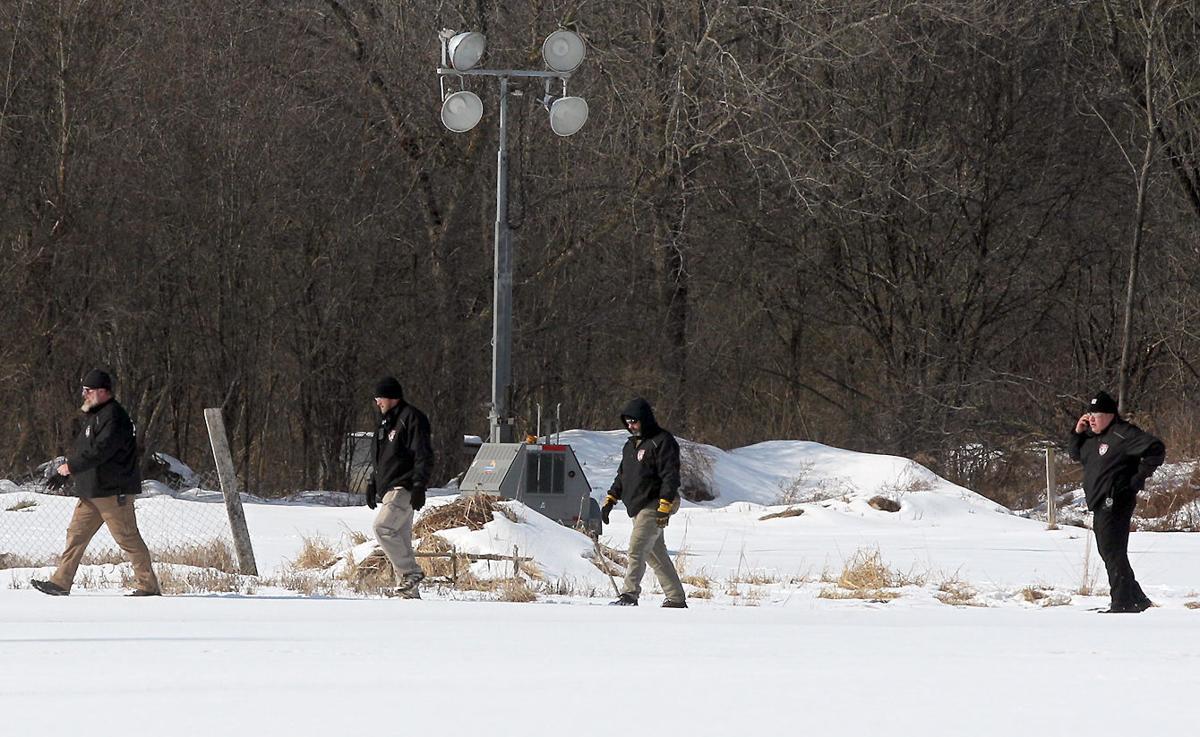 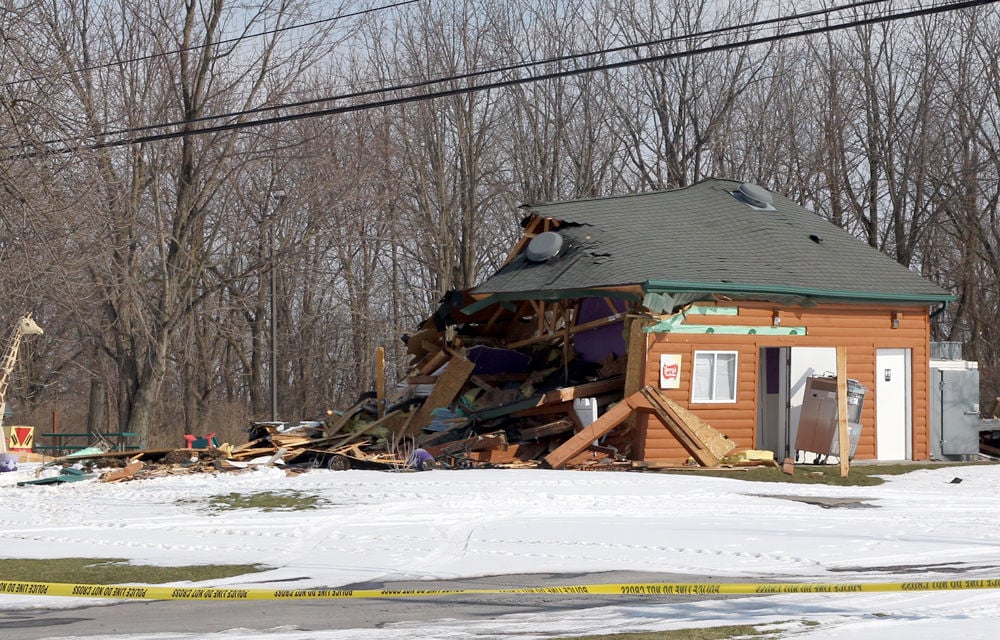 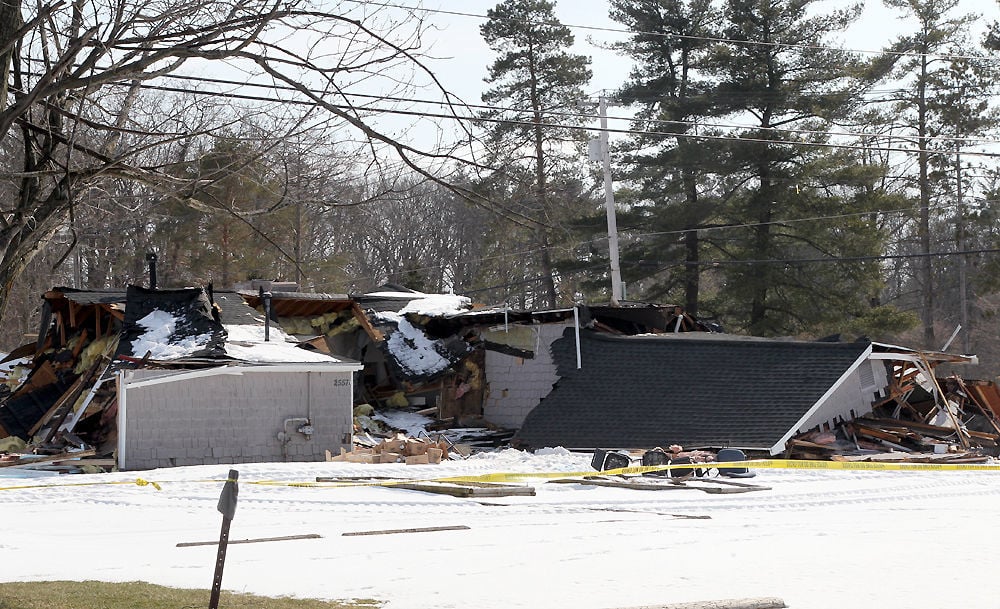 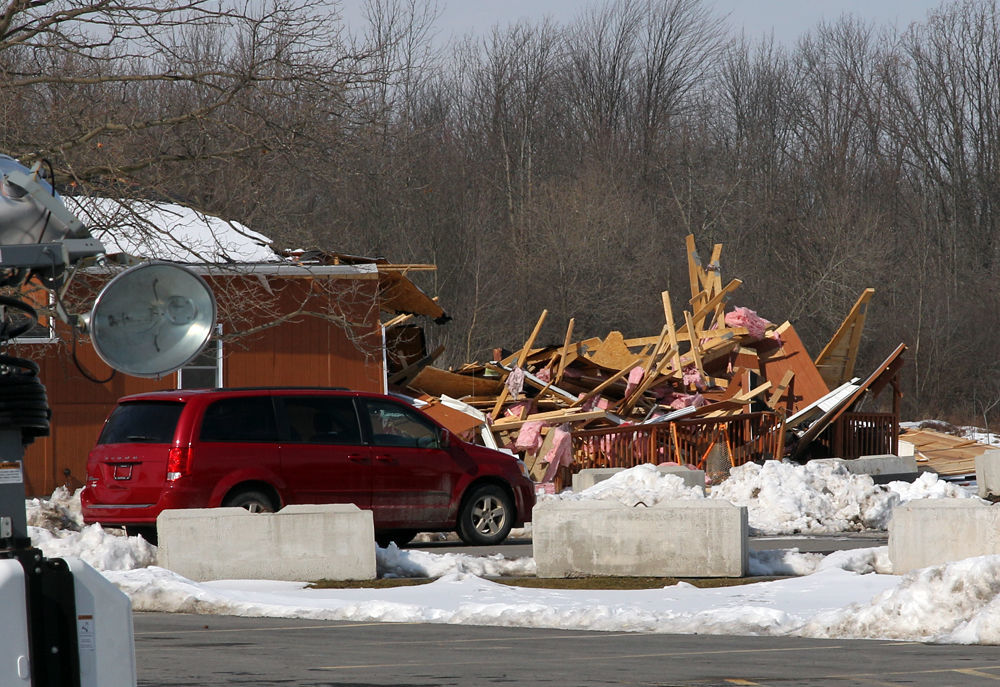 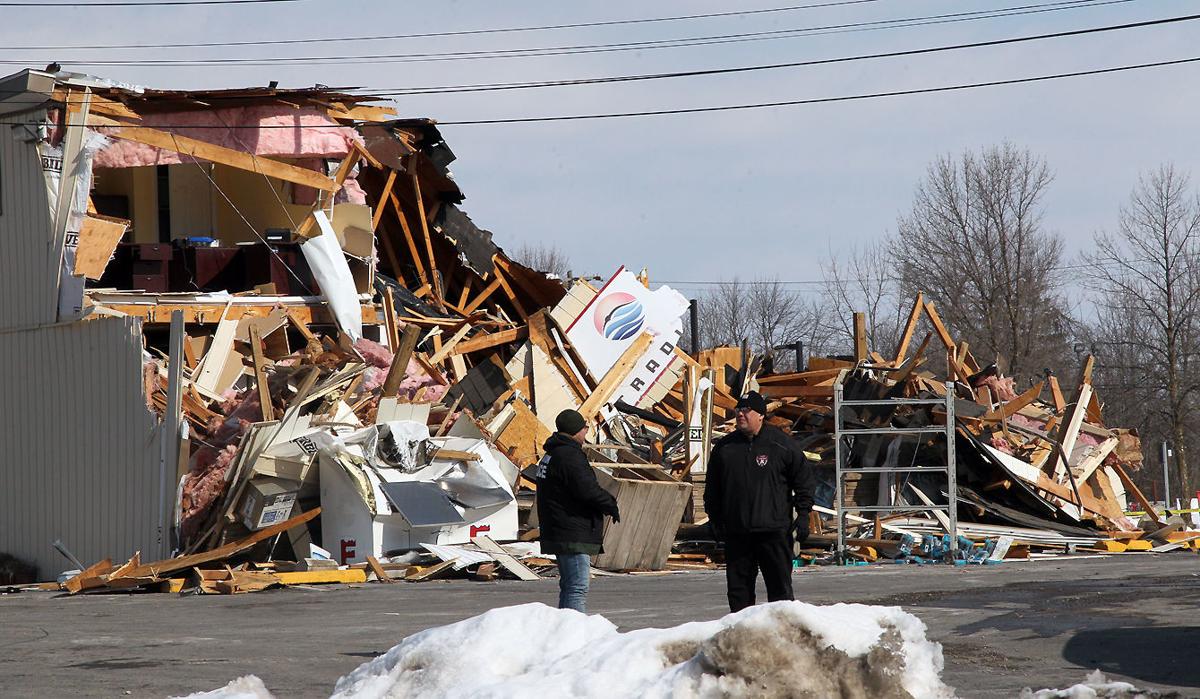 In a surprise middle-of-the-night raid Saturday, 12 Cayuga Indian Nation buildings on Route 89 were partially demolished on order of Clint Halftown, leader of one of the two rival tribal factions. 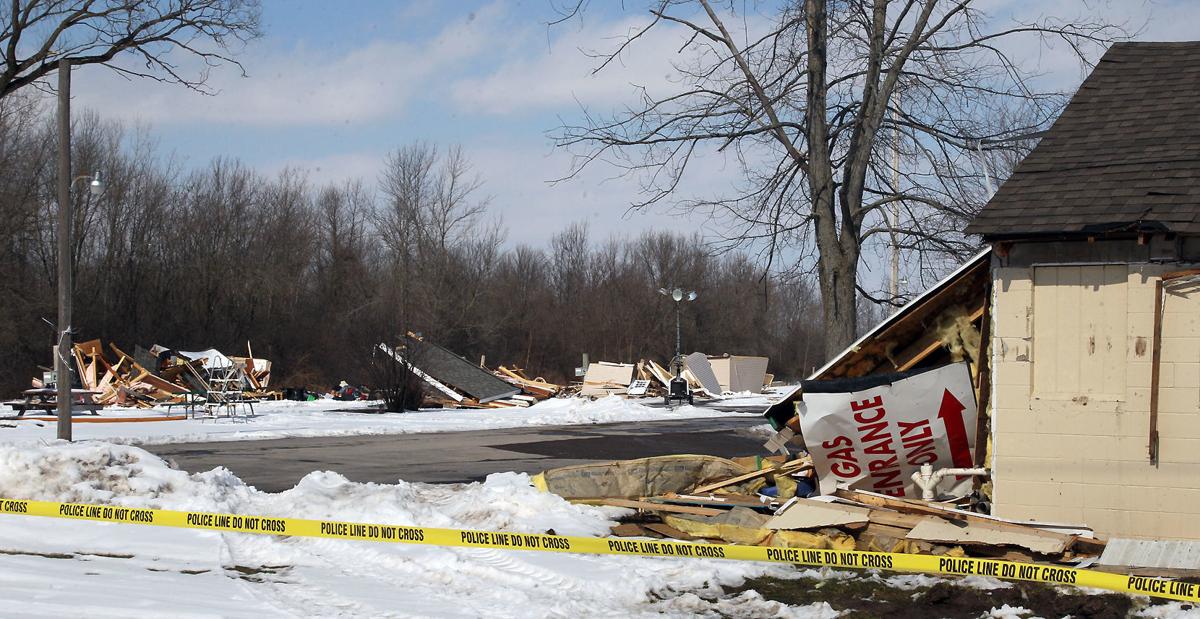 Some of the demolished buildings that were part of the middle-of-the-night raid on properties on Route 89 in Seneca Falls Saturday.

In a surprise middle-of-the-night raid Saturday, 12 Cayuga Indian Nation buildings on Route 89 were partially demolished on order of Clint Halftown, leader of one of the two rival tribal factions.

Some of the demolished buildings that were part of the middle-of-the-night raid on properties on Route 89 in Seneca Falls Saturday.

SENECA FALLS — Tensions between two rival factions of the Cayuga Indian Nation have been escalating in recent months.

Those feelings rose to a new level early Saturday morning.

In what was called “outrageous,” “egregious” and “a surprise” by some and execution of “tribal law” by others, 12 buildings on Route 89 were partially or fully demolished in a middle-of-the-night raid Saturday. The order was given by Clint Halftown, the federally recognized leader of the Cayugas.

The demolitions began about 2:30 a.m. and left the buildings unusable, shutting down the convenience store and gas station and others. By dawn, word of the raid had spread and people drove by steadily throughout the morning to view the damage. The properties were marked off with yellow police tape and black-coated men with “Cayuga Nation Police” on their backs guarded the properties, refusing to answer questions.

“Clint Halftown hired people to bring in excavators and knocked down most of these buildings,” said Fayette resident Charles Bowman. “He does not like the faction that is trying to maintain and preserve Cayuga language and culture. He thinks he is a dictator.”

Damaged or destroyed were the convenience store, a cannery on the east side of Route 89 that was once the Open Hearth Restaurant, an ice cream and miniature golf business next door, a longhouse and day care center on the west side and several small cabins used for temporary housing, also on the west side.

Those businesses were operated by a faction called the Unity Council, long-time opponents of Halftown’s efforts to take over as the sole leader of the Nation in Seneca and Cayuga counties. Halftown’s faction, by an informal agreement, owns and operates a gas station, convenience store and car wash in Union Springs in Cayuga County.

In a written statement distributed to the media about 8:30 Saturday, the Halftown faction said the Cayuga Nation “chose today to demolish certain buildings that it owned on these properties. It did so to eliminate certain public safety issues, and it does not want these buildings to become a target for any further friction in the community going forward.”

Bowman, who said he has worked for the Nation in maintenance for five years, got a message from a colleague about what was happening.

“I came right over and couldn’t believe what I saw,” Bowman said.

“There was no warning. This came out of the blue in the middle of the night. Who would think a Cayuga member would victimize his own people this way,” Bowman said, shaking his head.

The Halftown faction said the Cayuga Nation took possession of certain Cayuga properties that were seized from the Nation in 2014. Citing recent federal Bureau of Indian Affairs and court decisions that Halftown said upheld his claim to be the federally-recognized leader of the Nation, he added that a 2016 referendum of Cayuga people gave him support as tribal leader.

The Unity Council disagreed, saying the survey was improper and the traditional form of governance was a process by which clan mothers selected chiefs and leaders, and they had chosen Chief Sam George to be the leader.

Halftown has made threats to evict the Unity Council from the Seneca Falls properties before, and that came to a head Saturday.

“Despite this confirmation by the Cayuga people of their government, those who seized the Cayuga Nation properties in 2014 refused to leave,” the statement read. “They continued to operate Nation businesses, keeping the money for themselves and refusing to provide any accounting for how the money was spent.”

It was noted that the Nation brought a lawsuit in state court seeking to recover the property, but on Oct. 29, 2019, the state Court of Appeals refused to intervene and said the tribal factions need to work out a resolution of the dispute among themselves.

The statement said the Halftown faction employed that tribal law to detain persons who violated it Saturday morning.

“In the course of searching the property, the Nation’s law enforcement officers located substances suspected to be methamphetamine and marijuana, along with drug paraphernalia, guns and ammunition. Six individuals were released without charges. A seventh individual was charged with possession of a substance suspected to be meth and was arraigned by Cayuga Nation Judge Joseph Fahey in Union Springs,” the statement read.

“The charges will be resolved in the Cayuga Nation court system and the defendant may be represented by counsel of his choice. If he does not have counsel, an attorney will be provided,” it stated. The defendant was not identified.

Halftown justified the apprehensions by citing a June 17, 2019 letter from the BIA to Seneca Falls Police Chief Stu Peenstra, which he said declared the Nation has authority to enforce its own laws inside the Cayuga Indian Nation reservation boundaries. The Cayugas, however, do not have a federally-recognized sovereign reservation. An application to put 129 acres of its 1,200 acres into federal trust is pending.

Unity Council members gathered at the home of tribal elder Wanda Johns, a mile south from the wreckage on Route 89.

“There has been a long dispute and it got to the point where Clint Halftown decided to bring in equipment to demolish these buildings and to threaten the people living on the property. This threatens the livelihoods of employees and their children,” said Nation member Leeanne Young. “Several people were taken by force from the housing units, zip-tied and taken to Union Springs. There were no local police involved. There was no advance notice to vacate. We’re not sure what to do, but it will likely be handled by lawyers.”

One of those detained, who declined to give his name, said he was awakened by security forces who kicked in the door and drew weapons on him. He said people were pulled out of bed and told to get on the floor.

Young said Chief George was not in the area and stayed away for his own safety after hearing of the action.

“We are strong. We will rebuild. We’re glad everyone is safe. Some of us went to Cllnt’s house to try to speak to him, but we were turned away by security,” she said.

Daren and Cheryl Hammond of Phelps were in Seneca Falls when they learned of the incident on Facebook. They drove by and talked to a CIN police officer and got the Halftown version of events, defending the action.

“It was a surprise to see the demolition. They say they were just taking back what was theirs, but we don’t know who’s right or wrong,” Daren said.

“I hope there is no further retaliation. I could sense the tension at the scene,” Cheryl added.

Spencer Gauthier is human resources director for the Nation and a Unity Council supporter.

“I got a call early that Clint Halftown had equipment on the property to demolish buildings and there was a heavy police presence. They barred all entry and gave out no information,” Gauthier said.

He said when he arrived around 5 a.m. the buildings had been half-demolished and the equipment loaded up and removed. He said a local contractor was hired by Halftown.

“It’s outrageous. That’s not how political differences should be handled today. This is a threat to families and children,” Gauthier said. “Mr. Halftown’s actions are egregious. That is not trust land, and he has no right to do that. I’m not sure what will happen next, but the lawyers will try to figure it out. We’ve reached out to the state and federal elected officials, the governor and the BIA asking for help.”

Gauthier said cigarettes sold at the convenience store were removed before the demolition began, as were electronic devices such as computers and cell phones.

“We’re gathering, and once this deescalates from this traumatic event, we will have more to say,” Gauthier said.

The Seneca County Board of Supervisors will meet in special session at 1 p.m. today to discuss the Cayuga Indian Nation and potential litigation.

Board chairman Bob Hayssen, R-Varick, called the meeting. The session is expected o be in executive session.

The meeting will be in the Supervisors chambers in the County Office Building, 1 DiPronio Drive, Waterloo.