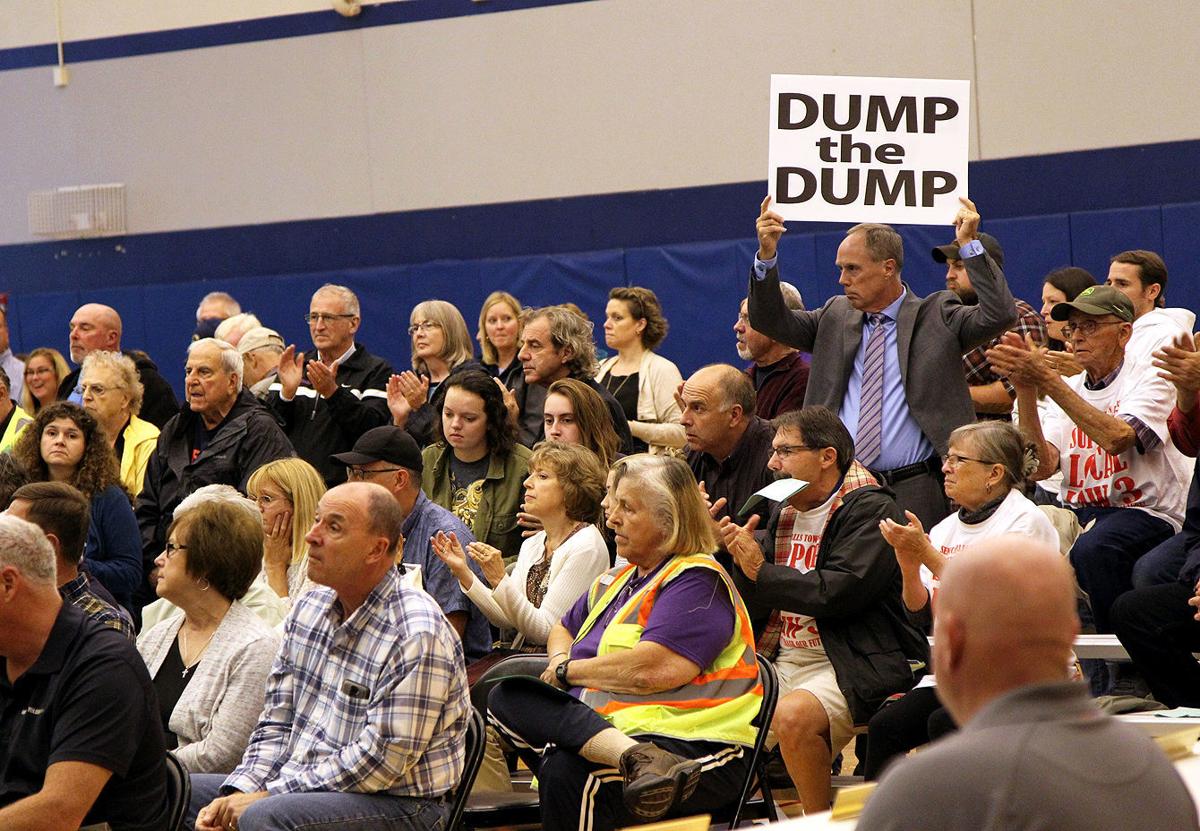 Seneca Falls resident Jim Sandlas holds a sign at the Seneca Falls Town Board meeting Tuesday as it was expected to discuss the Seneca Meadows landfill but the issues were ultimately taken off the agenda for the night. 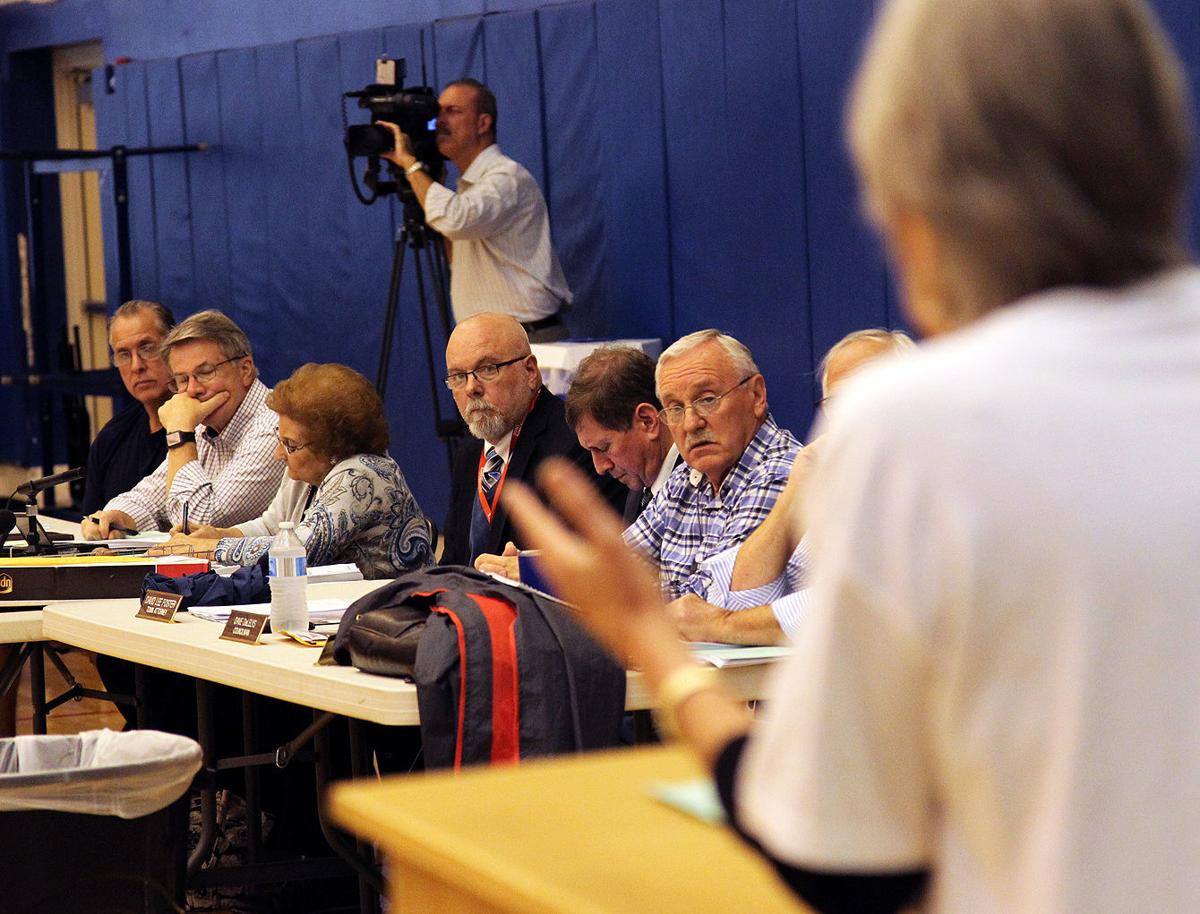 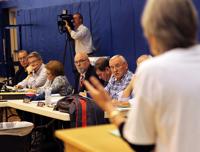 Seneca Falls resident Jim Sandlas holds a sign at the Seneca Falls Town Board meeting Tuesday as it was expected to discuss the Seneca Meadows landfill but the issues were ultimately taken off the agenda for the night.

With little explanation, motions relating to a new, $100 million agreement with Seneca Meadows Inc. was removed from Tuesday’s Town Board meeting agenda.

A crowd of more than 100 attended the meeting, mostly drawn by a recently revealed memorandum of understanding between the town and landfill that would provide the town with more than $100 million over the next 19 years in exchange for agreeing to let the landfill accept trash until 2037.

Some were likely itching for some verbal jousting.

After a public hearing on the county’s all hazards mitigation plan, Lazzaro immediately made a motion to remove:

• The possible renewal of SMI’s annual zoning permit from the old business portion of the agenda.

• The adoption of a memorandum of understanding that amends the 2007 community host benefits agreement between the town and landfill. The amendments call for the landfill to remain open until Dec. 31, 2037, and for the landfill to significantly increase its annual revenue to the town, based on a percentage of its annual gross revenues.

• A motion to authorize town engineers to prepare Part I of the Final Environmental Assessment Form.

• The agreement would also have SMI drop its lawsuit over Local Law 3 and amend Local Law 3 to allow for the operations to last until 2037.

Later, Lazzaro said that was being done “on the advice of our attorneys.” That would include Town Attorney David Foster and outside counsel David Hou of the Boylan Code law firm in Rochester.

Lazzaro then went on with the rest of the agenda.

Not knowing the landfill motions would be pulled, Valerie Sandlas, president of the Seneca Falls Environmental Action Committee, used the hearing topic to get in comments on the landfill. Citing words from the mitigation plan, she said it is supposed to protect lives and eliminate damage to property and infrastructure caused by natural and man-made hazards.

She said it would be “extremely short sighted and irresponsible” to ignore the largest landfill in the state when it comes to protecting lives and eliminating damage to property and infrastructure. “Seneca Meadows is an enormous man-made hazard,” she said.

Sandlas said granting SMI an almost 20-year expansion and agreeing to pass a local law with a 2037 closing date that can’t be challenged “clearly endangers the lives of the citizens of Seneca Falls and Seneca County.”

Kyle Black, Seneca Meadows district manager, said the landfill was asked to and quickly did respond to a call for help in disposing of debris from the Aug. 14 flooding in the south end of the county.

“Seneca Meadows plays an important part in protecting the environment and needs to be an integral part of this plan,” Black said, also to applause.

Doug Zamelis, a Cooperstown lawyer who represents Concerned Citizens of Seneca County, said “extending the landfill to 2037 makes it hard to fathom the damage from operating that long.”

He said the landfill has a permit that expires in 2025 and only has capacity to operate until 2025. He urged the board to defend Local Law 3 against the landfill lawsuit, saying he would file to be an intervenor in that lawsuit.

“You are standing on firm ground. Reject this ill-conceived settlement with SMI,” Zamelis said.

Bill McHale said town law requires the board to act as a body, not having individual board members acting unilaterally on behalf of the whole.

Lazzaro said speakers should talk about the mitigation plan. If not, they would be asked to sit down.

Allison Stokes said there was little information made available to the public about the mitigation plan. She suggested that installing a new sewer line along the Ludovico Sculpture Trail that carries leachate from the landfill to the wastewater treatment plant is a potential hazard that should be considered.

LEGAL NOTICE Notice of Formation of EDFFLLC Arts. of Org.