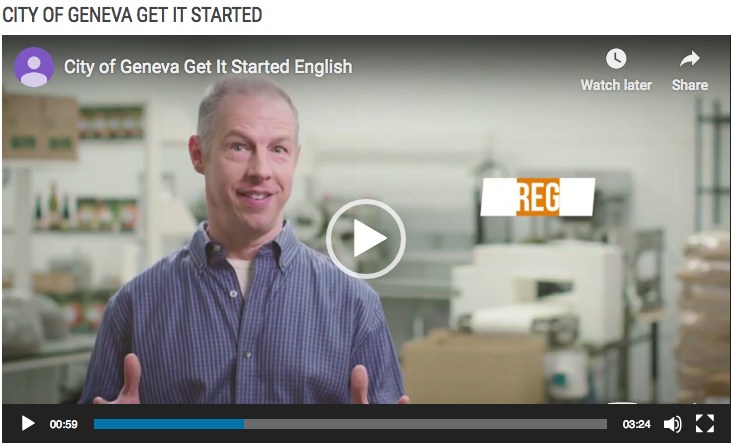 Greg Woodworth of Stony Brook Wholehearted Foods talks about why he chose Geneva in a new promotional video the city has produced.

GENEVA — Three colleges, a resurgent downtown and a setting at the head of one of the Finger Lakes gives the city advantages over many other communities.

But in the highly competitive world of business development, you need to do more, said Anne Nenneau, a member of the Geneva Industrial Development Agency and a founder of the office furniture builder CCN International. It’s a company with Rochester roots but which has enjoyed its greatest growth in Geneva.

The first order of business for enhancing the city’s business-friendly message was an easier-to-navigate website, said Nenneau.

Now the next one is complete: A new business-promotion video.

A marketing committee comprised of IDA and the Local Development Corp. members hatched the video idea, and it will become part of the city’s business-recruitment toolbox, Nenneau told City Council at its meeting a couple of weeks ago.

“We’re trying to be more proactive,” Nenneau told Council, explaining that the video, with English and Spanish versions, was produced by LaBarge Media of Canandaigua, which has done promo videos and commercials for local and national customers, including CCN and the Canandaigua Chamber of Commerce. “It’s a real enticing video.”

Nenneau said the video went through a number of edits before arriving at the final version Council viewed at its July 10 meeting.

The video, with the theme “Get it Started in Geneva,” cost $25,000, an expense shared by the city, the IDA, the LDC and the Ontario County IDA.

“We needed to have a visual representation and promotion of Geneva that would get more businesses and people interested in what we have going on here in Geneva,” said Blowers. “We want to thank the full membership of the IDA, LDC, Ontario County IDA, Geneva City Council, all the participants of the video, and all of the production staff that had a part in this grand scale project. We are proud of Geneva and this is just one more way to share our story. You can find the video on the homepage of our City website. It was very important to us to have the videos in English and Spanish, so you will see those side by side on the site.”

“What makes Geneva, N.Y., the perfect place to begin or expand your business?” the announcer asks in the video. “Easy: You won’t find anyplace, anywhere that will do more to help you get it started.”

The video includes a number of start-up Geneva businesses, including Stony Brook Wholeheartedfoods, RealEats and the Solar Home Factory.

“Geneva has grit,” Stony Brook founder Greg Woodworth said in the video. “And so when you first come here you get the feeling that, ‘Maybe I could make this happen here.’ ”

“We have a phenomenal environment,” he says in the video. “It is really the perfect blend of lifestyle and a work environment that really leads to Cornell AgriTech being world preeminent.”

Ryan Wallace of the Solar Home Factory, which is supplying homes for the Lake Tunnel Solar Village project, said his company looked at many locations for its headquarters before deciding on Geneva. He says in the video that Geneva has the “best balance of livability, economic incentives and just general quality of life.”

The video also highlights cultural institutions such as the Smith Center for the Arts, the dynamic food scene, a locally owned healthcare system, and more.

“We have an awful lot to offer,” Nenneau said.

The next step is to ensure the video is seen by as many eyes as possible through social media and the internet.

Ward 2 Councilor Paul D’Amico said that with 2020 budget discussions underway soon, it might be wise to allocate some funds to spread the word about Geneva as a great place to do business, with the promotional video first and foremost.

To see the video promoting the city of Geneva, visit cityofgenevany.com/businesses.

LEGAL NOTICE Notice of formation of EVC, LLC. Art. Of