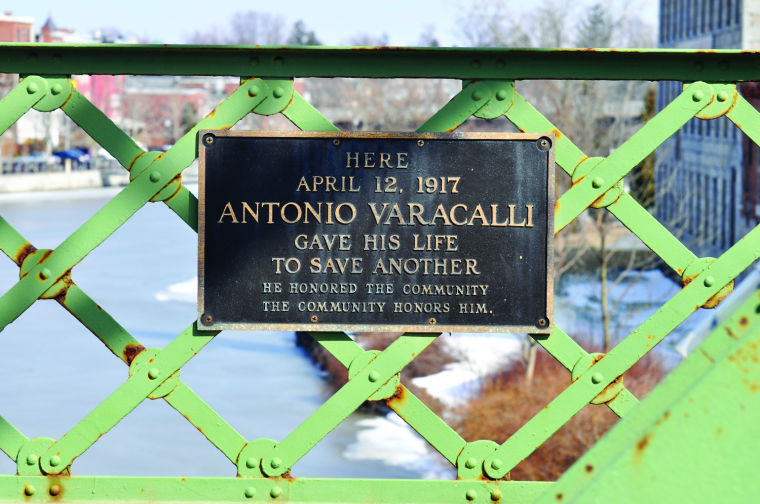 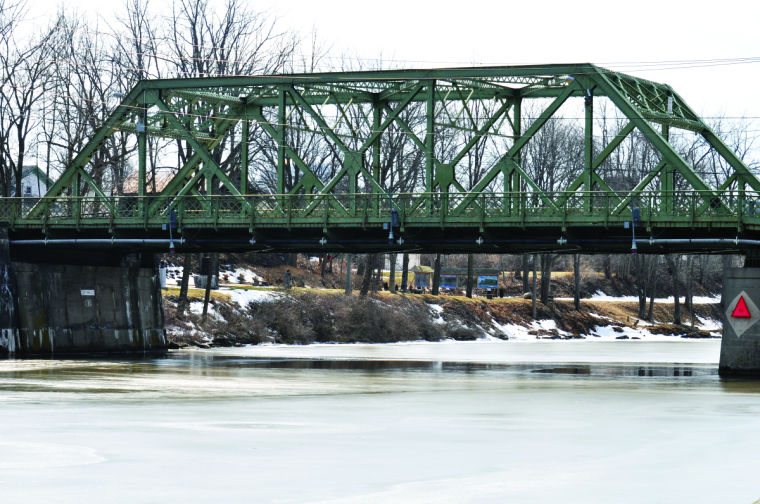 SENECA FALLS — Remember the scene in “It’s A Wonderful Life” when a despondent George Bailey, possibly considering suicide, stands on a snowy bridge and sees a man yelling for help in the icy waters below?

If so, you also probably remember that Bailey jumps in and rescues the man, who turns out to be Clarence, the angel sent to help Bailey realize his life has value.

The inspiration for that scene, and possibly the entire 1946 Frank Capra movie, may have been the story of Antonio Varacalli.

At about 10:30 a.m. April 12, 1917, a 19-year-old woman named Ruth Dunham threw herself off the bridge into the canal. Dunham lived at the corner of Bridge and William streets, about a block from the water.

“The act was witnessed by several persons, who succeeded in saving her life,” a story in the April 13, 1917, issue of the Seneca Falls Reveille said, “but in the effort, an Italian resident whose first name was Tony, who has piloted the girl near the shore, was himself drowned, suddenly sinking in the water.

“What prompted the girl to attempt her own life seems to be a mystery. Dr. John F. Crosby was called and assisted in restoring her to consciousness,” the newspaper reported.

Tony was 17-year-old Antonio Varacalli, a Barge Canal worker who was walking in the vicinity of the bridge when he heard someone scream.

“Without hesitation, he jumped into the canal to save the young woman, although he could not swim,” Gable wrote. “He managed to get the girl to the canal bank before he sank into the water and drowned.”

Varacalli was pronounced dead at 11 a.m.

Varacalli, who was living at 16 Rumsey St., had lied about his age in order to get a job with the canal.

He came to Seneca Falls with his father, Dominick Varacalli, in 1907. They intended to find work and save money to bring the rest of the family to the United States.

In a 1987 interview with former county historian Betty Auten, Dominick Cafora recalled the 1917 incident. He was working for the town of Seneca Falls, as was Dominick Varacalli. They were clearing up the highway near the Seneca Falls Machine Co. on Fall Street when a call came from the village to say Dominick Varacalli was needed.

“When Dominick reached the bridge, he was told his son had drowned,” Cafora recalled.

Word of his heroism spread. St. Patrick’s Church was packed for his funeral.

The April 20, 1917, issue of the Reveille contained a letter from the Rev. William Clarke, pastor of Trinity Episcopal Church.

“It seems to me that an act of such supreme heroism and self-sacrifice as that of the young Italian, Antonio Varacalli, who last week gave his life in the successful attempt to save another’s life from drowning, ought not to be allowed to pass without some public expression of the great honor it has conferred upon our community,” he wrote.

Expressing his own great admiration for Varacalli’s actions, he said he would bring his heroism to the attention of the Carnegie Institute in hopes that Varacalli would be recognized properly, along with being included in its widely published and distinguished list of honor.

A fund was started to provide a memorial. The plaque was made and put on the bridge. It read: “Here. April 12, 1917, Antonio Varacalli gave his life to save another. He honored the community. The community honors him.”

On June 20, 1921, a benefit was held for Varacalli. He was awarded the Carnegie Medal, but no money accompanied the award, which was common for the time.

Locals had hoped the money raised there and the Carnegie money could be enough to bring the rest of the family over from Italy: Antonio’s mother, two sisters and a grandson.

Gable wrote the family arrived in New York City by ship and was put on a train for upstate. However, because they didn’t understand English, the Varacallis did not know when the conductor called out Seneca Falls as a stop.

Railroad employees neglected to tell them when to get off. They went all the way to Niagara Falls.

“Anxiety took over, and he collapsed at 9 p.m.,” Gable wrote.

Eventually, everything was straightened out, and the family was reunited for the first time in 15 years July 28, 1922, in Seneca Falls.

On Dec. 7, 2012, the Town Board declared April 12 as Antonio Varacalli Day in Seneca Falls every year. At last week’s Town Board meeting, Barbara Reigel of the It’s A Wonderful Life Committee announced plans for this year’s celebration of his heroism.

Supervisor Don Earle will speak at a special ceremony on the Bridge Street bridge, followed by a ziti dinner and Italian music at the nearby Community Center.

The board approved the event, which will be held from 1 to 2:30 p.m. on the bridge, followed by the Community Center activities.

Capra visited Seneca Falls on his way to see relatives in Auburn. He reportedly got his haircut at Tommy Bellissima’s barber shop, and it’s been suggested he may have been told Varacalli’s story at that time.

The filmmaker apparently got a good look at the layout of the village. Many feel he based the Bedford Falls of his movie on Seneca Falls, and incorporated Varacalli’s story into arguably the movie’s most famous scene.