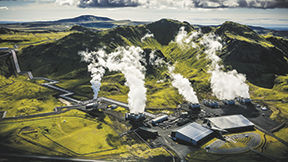 The Carbfix plant in Iceland. 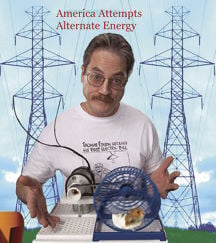 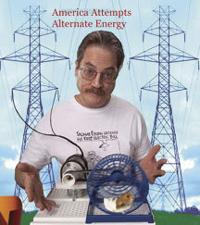 A sound that flows into my mind

(The echoes of the daylight)

Of everything that is alive

(In my blue world)

I turn to stone

The biggest innovations in climate control and therefore alternate energy come from the smallest countries. I have written several times about Denmark’s accomplishments, and this is the second article about Iceland. It is about carbon capture.

Carbon capture is that ongoing attempt to draw carbon out of the atmosphere that we as humans contributed. Carbon dioxide, although a necessary gas, has increased in the atmosphere by 47% since the industrial revolution, says NASA. Carbon dioxide and other greenhouse gases act as heat reflectors that send heat back to earth in a distributive fashion. Greenhouse effect comes from the very fact that a simple plastic housing can retain heat simply from the reflected energy received from the sun. We feel this same effect in our cars on a sunny but cold winter day. Gases, such as those containing fluorocarbons, are by far the worst offenders as they are 6,500 times more potent as CO2.

We all leave a carbon foot print. Just using the internet leaves one. Interestingly enough according to BBC’s Future Planet segment, the carbon footprint left by the internet would rank sixth if it were a country. So we all have a role in this and a responsibility to minimize this footprint.

One particular cause of climate change that we have no control over and that we seldom consider is solar irradiance, the output of light energy from the entire surface of the sun as measured at the earth. NASA estimates that less than 10% of this irradiance could have added to the climate in the 20th Century. The studies are incomplete since the mapping of the sun is a fairly recent process.

The next irony is that water vapor is a tremendous adjunct to climate control. While the ocean’s temperature rises, the elevation in temperature produces more water vapor which retains heat. However, at a certain point this saturation will produce clouds that reflect the sun’s rays energy and cool the earth. This is the albedo effect, discussed in a previous column.

What steps should we take?

So much for that pipe dream. Back to reality.

We need to reduce our consumption of non-renewable energy sources to start with. Then we need to innovate ways to capture the carbon dioxide and store it or better yet, change it to another compound that is essentially non-reactive or inert. The largest facilities for carbon capture are in the U.S. and Canada. Here the method of high pressure sequestering in deep crevasses is used. However, the effectiveness is limited as it requires high pressure to force the carbon dioxide into a reservoir over 1 kilometer into the ground. In time, the CO2 will react with the underground and become a calcite. This can take hundreds of years. In the meantime, there must be assurances the CO2 stays there. Good luck with that one. The paradox with this and other forms of handling heat and toxic waste from power production is the excess energy it takes to make these controls happen.

Iceland has an aluminum refinery that processes alumina, which is the reduction product of bauxite. In the process of refining alumina, CO2 gas is emitted. This is not our usual train of thought when it comes to global warming. This is called the oxidative reduction process where the alumina substance is reduced to pure aluminum and carbon dioxide is released. In this process, heat is need to produce this “reduction” while CO2 in the more traditionally understood process is released due to the combustion of some fuel. In other words, heat is the by-product of combustion. To add to the irony Iceland uses Geothermal heat and does not actually combust any fuel. But as Murphy’s law would have it, geothermal produces sulfur-based gases which add to greenhouse gases. Just visit Venus sometime; it is hotter than Mercury!

In Iceland they know how to make the best use of their resources. In this case they use their abundant geothermal power to capture the CO2 and the various oxides of sulfur. A company called Carbfix (no, not a diet plan) takes these gases and mixes them with water. With less pressure, this water mix is sent below among the mineral rich lava rocks. In less than two years these soluble gases combine with the iron, calcium, and magnesium that are in the volcanic rock. Now these gases have truly turned to stone such as iron sulfide, magnesium carbonate.

What about all that water that has been contaminated with these gases? Carbfix responds by saying that it takes 27 tons of (fresh) water to handle one ton of the gas. After the chemical reduction takes place the water is pure again and totally reusable. Carbfix is making this technology available worldwide. Unfortunately, areas where it can be used are near salt water. Salt water already has dissolved minerals in it which leaves less room for other soluble items. Therefore much more water has to be used and it takes much more time to react with the minerals as the dissolved solids will also compete chemically to react to the volcanic rock.

This is one step in the right direction. Iceland is one of those rare places where the resources are intrinsically linked to the success their energy mix and the conscience of the nation is on board to value this and the responsibility of environment. In my humble opinion, planting trees will go much further in solving the carbon sequestering problem, however, not in Iceland. Kudos to Iceland.

James Bobreski is a process control engineer in the power production
field for 43 years. He currently is engaged in designing robotics and sustainable
power for small fruit and vegetable farming operations. He lives with his
significant other Sherry and their two cats, Flash and Dash (now Dasha).
He also is the author of "Alternate Energy and Climate Change in the
Age of Trump," available at Longs' Bookstore and on Amazon.com.
+1