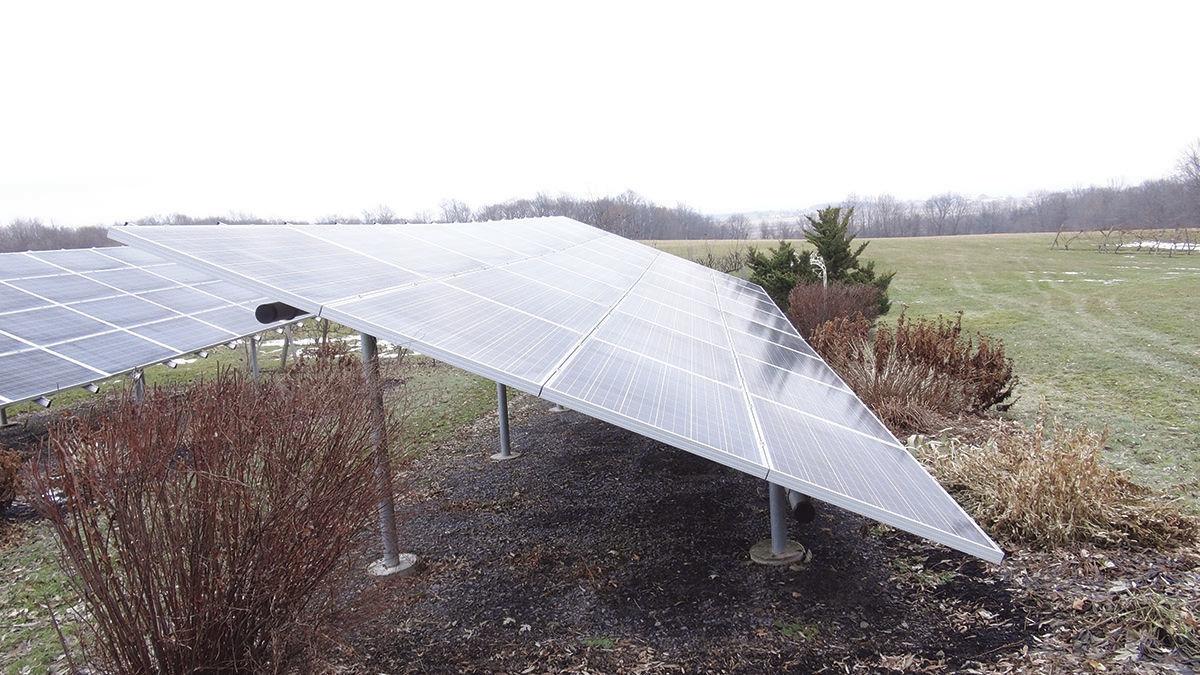 At Los Gatos, a bed-and-breakfast in Penn Yan, an 86-panel solar array includes 64 on the ground facing up at approximately a 22-degree angle. The remaining 22 panels are mounted on the roof of the main building at a 60-degree angle. The reason is the trees that are directly south of the path of the solar panels.

This month, we look at a number of successful businesses providing a valuable community service in energy. Alternate energy is now cost effective and a smart investment. I interviewed a number of Yates and Ontario county constructors who provide solar and geothermal energy to over a thousand customers and have reduced the carbon footprint substantially. This, by far, is my brightest feature! Pun intended.

I thought I would begin with a local effort in my hometown of Penn Yan. There are a variety of services and users in the field of alternate energy. Most notable here are geothermal and solar. For a small town we have a significant interest in alternate energy with many local installations of geothermal and solar. As for installers, we have Moravec Geothermal Well Drillers, Dailey Electric and Qwik Solar.

At Moravec Geothermal, I spoke with CEO Kevin Moravec and asked about the size, scope and average time of a project. The size of a geothermal site is based on the BTUs or Therms a customer is looking to replace based on usage. The scope depends upon the size of the property. With sufficient land a horizontal system that does not require long vertical drilling can be used, but in tighter quarters, a deep drill well or vertical system is called for.

With a vertical system, the planning and preparation drilling is the first step. The typical depth is fairly deep, about 300 to 400 feet. In Penn Yan one has to drill deeper to reach higher temperatures than say in southern Pennsylvania. Then an inch-and-a-half pipe is lowered into the hole and a loop is formed to capture the energy exchange. After the drilling is complete, the processing equipment is installed.

I next spoke with Ryan Dailey at Dailey Electric and its role in completing a project. Heat exchange is done via a heat pump, which Dailey Electric installs along with corresponding electric power and the electronic controls. I say heat exchange because just as a “heat” pump provides heat, it also can provide cooling with the same well. Heat pumps have been around for a long time. Improvements recently came in motor and pump efficiencies, but for the most part, there have been no big changes except for adapting techniques of variable capacity system. Without getting into the science of heat exchange, suffice to say that variable capacity systems have improved geothermal by about 20 percent, thereby adding to its already noted value.

What I learned from Kevin and Ryan is that geothermal may be the inevitable future of home heating because gas lines in the state are showing signs of deterioration. A New York Times article reported that natural gas leaks nationwide lose about 2.3%, though due to the tens of thousands of miles of gas lines, it is very difficult to measure. The Environmental Defense Fund — or EDF — is working on a project called MethaneSat, which will use LiDAR and Infrared technology to detect gas leaks from space. Its anticipated launch is 2022.

With the cost of repair of these gas lines, installing geothermal becomes a better alternative. It may come to the point where geothermal installation per home will be cheaper than replacing the pipelines. Couple this with a carbon reduction of approximately 10 tons per year, its a no-brainer.

• Qwik Solar, Penn Yan has done over 1,000 installations in New York. I had an interesting chat with Dan Lewis who told me that Qwik Solar also has made some solar farm installations that allow people to go solar without installing them on a roof or property. Qwik Solar panels are made by Panasonic, which makes the guarantees more effective as Panasonic is likely to be around for the next 25 years while other solar cell manufactures may not be. Plus these panels are around 20% efficient with a 90% yield after 10 years of operation. This is key too because not all panels can make this claim. Solar panels do degenerate over time but at these rates they are likely to outlast the owners. This does not take into account the return on investment. In most cases solar can repay itself in 7-10 years.

• Solar Home Factory and Solar Village, Geneva is unique in that it offers solar homes as a complete package. It features “Net Zero” energy homes as turn-key operation. I spoke with owner Ryan Wallace about his projects. Solar Home Factory factors in the net carbon affect of construction. Communal solar is actually the most efficient use of solar energy because all the energy use of each appliance is the same. Ryan’s Solar Village is an idea of the future today.

• Hunt Country Vineyards, Branchport has one of the largest projects I looked at. It has 348 solar panels for electric power and eight 375-foot wells for geothermal operation. Hunt Country has taken an extra step in supplying its store with locally produced goods to reduce the shipping costs and its carbon footprint. Its operation produces 120,000 kilowatt hours of electricity with its solar panels, reducing fuel consumption by 5,500 gallons. Is it all worth it? The annual energy costs saved amount to nearly $40,000. The capital cost will be paid in less than 10 years and the rest is a steady income and savings.

There several other vineyards and wineries replacing their carbon footprint as well, notably Wagner Vineyards, Dr. Franks and, Eagle Crest. I hope to get out there soon.

• MM Electric, Geneva has installed a 50 kilowatt system, and I spoke with owner Matt Shumway. He has an outdoor array of solar panels and his return on investment is only four years. With the business incentives and meter rewind, he will save $800 a month and have a significant capital improvement investment. I asked about snow accumulation, and he said it is not a major problem because when it snows there’s little available energy collected anyway. Once it stops snowing, because the solar panels are black and collect heat, that heat melts the snow where it is contact with the panel.

• Los Gatos, Penn Yan is a bed-and-breakfast on Route 14A North just as you are leaving Penn Yan. It means “The Cats,” and I spoke with the new owner Charlie Franks, a former solar installer himself. His 86-panel array is unique because the arrays are split up and one is at a curious angle. There are 64 panels on the ground facing up at approximately a 22-degree angle. The remaining 22 panels are mounted on the roof of the main building at a 60- degree angle. Optimal solar panel angle is about 45 degrees at this latitude. The reason for the 22-degree — the trees that are directly south of the path of the solar panels. To make the best of the situation was to model the optimal solar index angle and use the roof while not cutting the trees. Having a B-and-B and solar maximizes the energy use from the solar arrays.

There are some other proposed solar projects, such as the 80 megawatt unit for Waterloo. At a cost of $95 million — an installed price of about $1.10 a watt — these are solar fields that offer the consumer the option of purchasing solar produced electricity without having the panels directly installed on their roofs or property. This one-fourth the cost of nuclear power and less than 1 percent of security and maintenance costs of a nuclear plant. However, large solar farms are met with resistance by various neighborhood groups that are not pleased to have these solar fields in their vicinity. A number of groups have expressed displeasure with the large Waterloo project by NextAmp. I would like to ask if a gas-fired or nuclear power plant would be a better alternative?

Having an energy efficient system today is not only a step in the green direction but it makes “cents.”

In my very humble opinion, if I were starting out today in life I would build my house to face south and place as many solar panels on the roof as possible. I would have a geothermal heating and cooling system as well. If I lived in a city area I would opt for a communal setting like Solar Village. It’s not just about the environment. It makes economical sense. It’s like having your cake and eating it, too!

James Bobreski is a process control engineer who has been in the field of electric power production for 43 years. His “Alternate Energy” column runs monthly. He is the owner of Synchronicity1 LLC in Penn Yan, which is dedicated to designing a digital farm for independent farm operation. He has several inventions, namely a digital wire sorter, portable scoreboard, axis solar panel drive and a ubiquitously mountable LED light module. He also likes to cycle and play soccer. He lives with his life partner, Sherry, in Penn Yan.