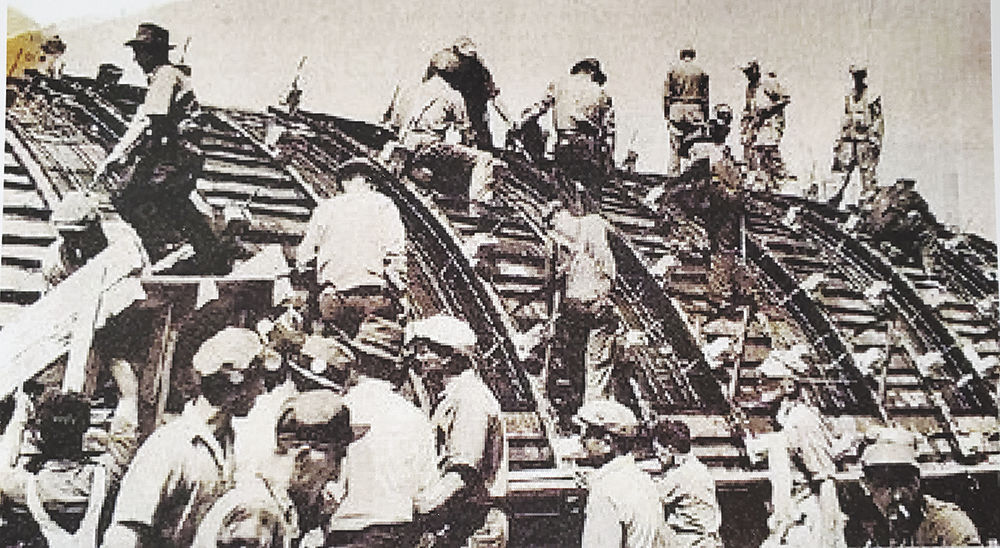 A copy of a photo from Historic Geneva that is on display at the DHP Visitor Center from the 1941 construction of the igloos at the Seneca Ordnance Depot.

A copy of a photo from Historic Geneva that is on display at the DHP Visitor Center from the 1941 construction of the igloos at the Seneca Ordnance Depot.

Queen Anne’s lace bordered the Deer Haven Park roadways like a white carpet laid out for our arrival. The tour bus crept along roadways originally paved in 1941 as tour guide Frank Arpino and driver John Hunt hosted their visitors. Late-summer crickets hummed, their song carried on the westward breeze as we pulled to a stop at one of the massive munitions igloos.

Upon disembarking, an overwhelming sense of calm, peaceful energy hovered among a lingering scent of ripened vegetation. An unseen bee buzzed nearby, and a lone songbird could be heard calling in the distance.

Suddenly, the hum of the cicadas began soft and low, entrancing, like a concerto of nature that gradually reached a crescendo and then quieted, as if seeking one’s pause of awe, followed by a rippled standing ovation and applause.

In that moment, time seemed to turn back the years like one would finger flip through the pages of a history novel. It was 80 years ago, 1941, when roughly 8,600 workmen converged on this over 10,000- acre former farmstead landscape, racing to reach a construction deadline on a multimillion-dollar project: the Seneca Ordnance Depot munitions storage facility. Looking up at the igloo, one could sense this long-ago presence, with the sound of cranes and cement trucks running and men yelling directions above the machinery roar.

It was the Great Depression, and families came from all over the East Coast for work beginning in July 1941. An original completion date was targeted for 519 igloos to be constructed by May 1942. However, with growing government concerns, events unfolding overseas, and local commanders fearing winter weather conditions, the deadline was moved up four times with engineers finally hopeful for a Nov. 15, 1941 completion date.

To accomplish this, over 6,000 of the total workforce rotated round-the-clock shifts, under huge nighttime floodlights, to construct 15-foot high, arched steel rebar frames. Concrete floors were poured, most of which measured roughly 25-feet wide by 60-feet long. After the floors were set, the pouring of the concrete walls commenced with a base width of approximately 18-24 inches and narrowing to roughly 6-8 inch thick rooftops. This was done with purpose — in case of explosion, the top would blow up and walls would fall inward, protecting nearby igloos. Standing within the structure, one could see this inner framework. An overwhelming sense of accomplishment lingers here.

Igloos were placed 400-500 feet apart along roadways that run east to west in parallel fashion. Massive concrete headwalls were designed to withstand possible nearby explosions with near 1,000-pound concrete and steel entry doors.

Tour guide Frank explained the intricacy of these locked doors and how a ventilation system was in place to keep inside temperatures at a constant 50 to 60 degrees to prolong the life of ammo and powder. The same system also protected the inside unit from outside brush fires. As well, lightning rods were placed to avoid any direct strikes.

Once the concrete set and hardened, 2-3 feet of sod was placed on top and surrounding each igloo to help with security and inner climate control. Igloos were then ready to store any ammunition a soldier would need — from bullets and grenades to rockets and bombs weighing up to 10,000 pounds!

Like stepping out of a time capsule, we exited the igloo as the screech from a swooping red-tailed hawk helped to ground us back into the present day. A milestone in history being celebrated with every bus tour, right here, beyond the fence.