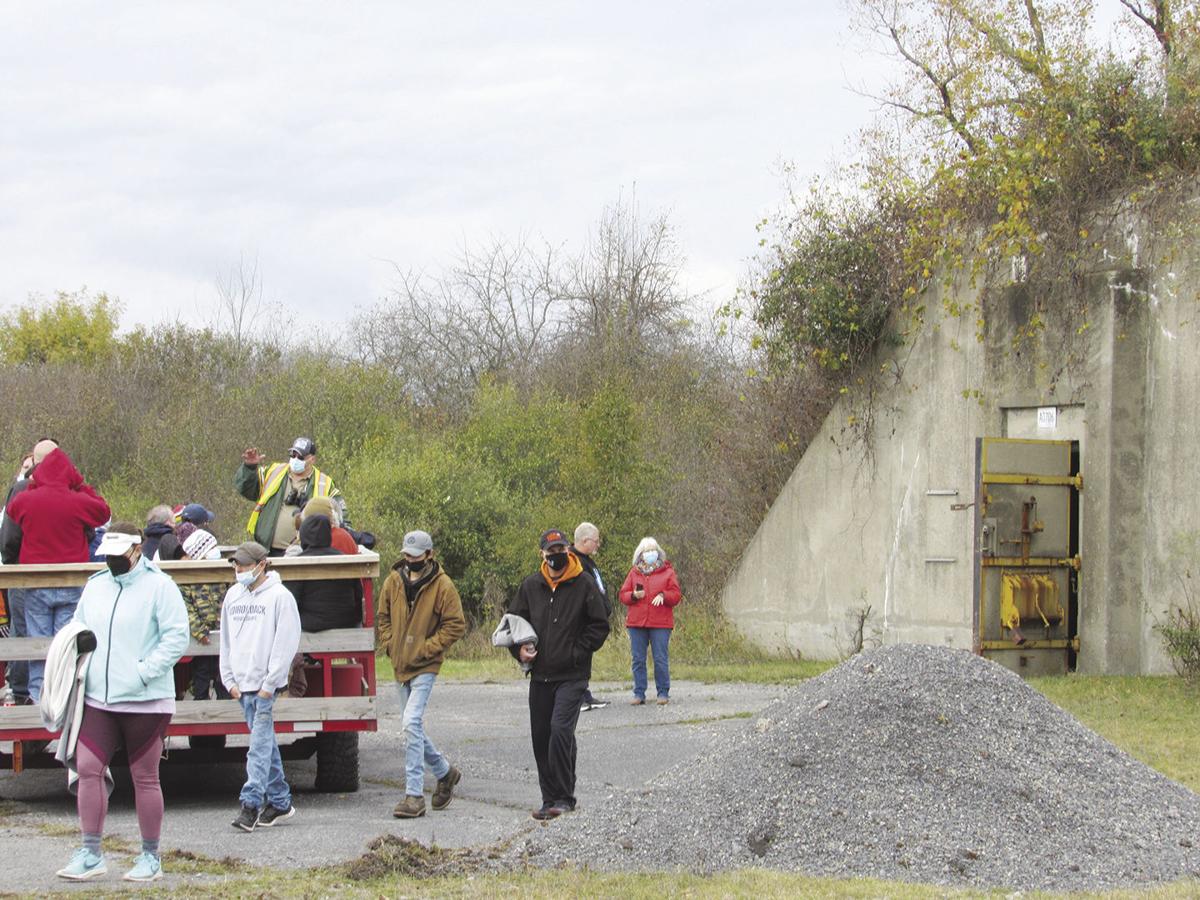 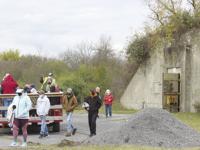 A group on a fall tour of Deer Haven Park disembarks to explore one of the munitions igloos. 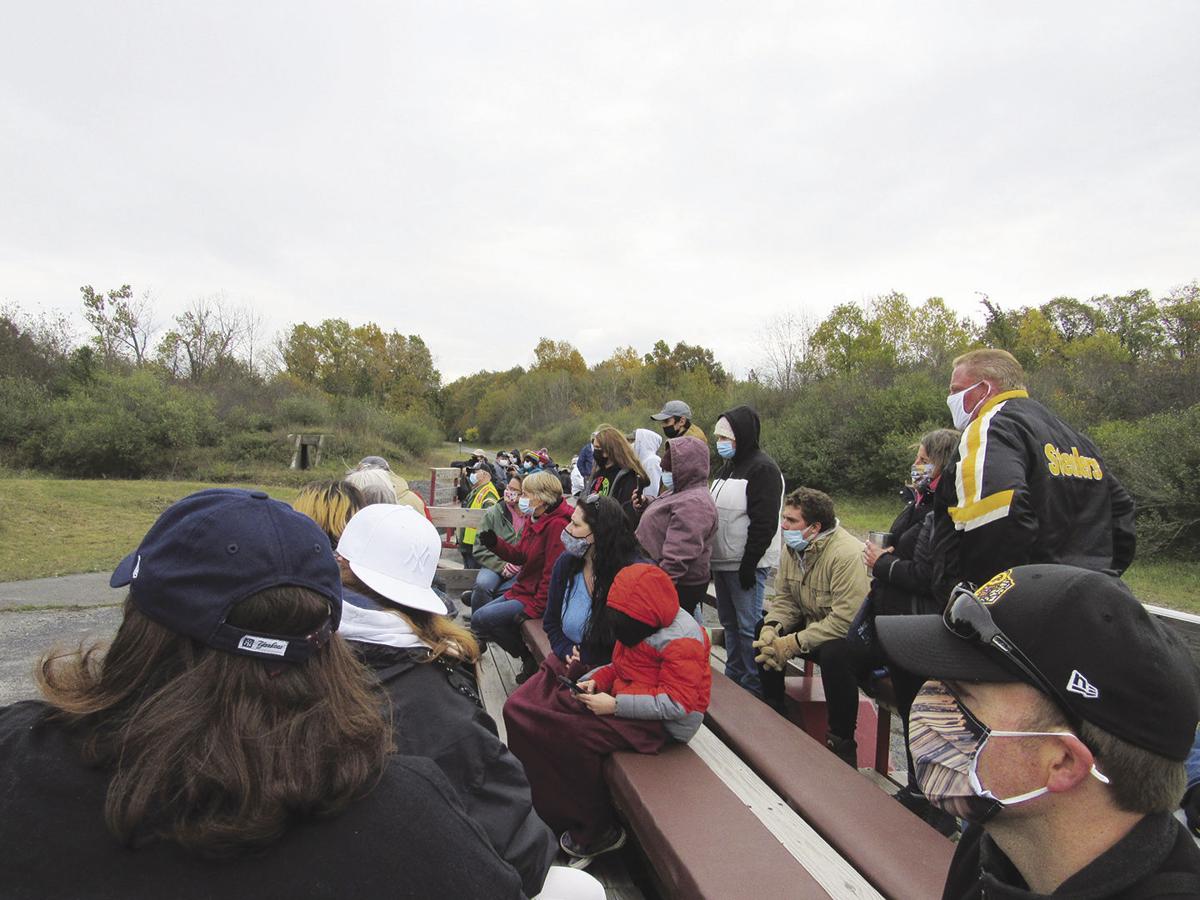 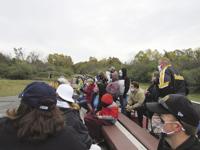 A wagon tour group encounters a huge white whitetail buck during a recent outing. The wagons came to a stop and many folks stood in awe of this encounter.

A group on a fall tour of Deer Haven Park disembarks to explore one of the munitions igloos.

A wagon tour group encounters a huge white whitetail buck during a recent outing. The wagons came to a stop and many folks stood in awe of this encounter.

Autumn escorts a whole new vibe into Deer Haven Park. Since the popularity of the park’s first open-wagon tour last fall, visitors and staff alike agree that the official end of the touring season would not be complete without this escapade. So much so that this year DHP hosted two! Highlighting the former Seneca Army Depot’s decades-old military history while breathing the fresh fall air proved to be, once again, an adventure many excitedly wanted to embark upon.

The Visitor Center was abuzz with folks signing up for auto, wagon, and private tours, as well as those wishing to secure gift shop souvenirs and unique Christmas presents. It was all-hands-on-deck for staff, tour guides, and volunteers.

Visitors, dressed for autumn’s chill (COVID masks assisting with facial warmth), loaded up twin touring wagons. The tour guide’s introduction to this two-hour journey advised participants that due to the microphone and wagon noise, it would not be a surprise if the wildlife remained in short visual supply. Guaranteed, however, was the sharing of a clandestine military history replete with time to disembark and encounter munitions bunkers as well as personnel bomb shelters created by the hand of man way back in 1941.

At that, anticipant energy charged the air like swirling Fourth of July sparklers. Would our activity bother the wildlife, or would there be a chance to spy any white whitetail deer?

The day was the epitome of autumn what with its gray, overcast sky and temperatures tempting the 50-degree mark but not quite accomplishing this feat. The pungent, earthy scent of fallen leaves filled the air as the breeze tickled lingering leafy branches, emanating a tranquil, harmonic rustling. Entrancing. Peaceful. Calm.

For whitetail deer, this time of year entertains what is called the rut. The bucks will be boasting their antlers and strutting to entice does to breed. The does that impregnate will carry throughout the winter and birth their young in the spring.

The entrance roadway escorted us to a munitions igloo area, called B, or Bravo section. The creation of the Depot’s igloos was shared, as was the backdrop of the many miles of outlying fencing, railroad tracks, and the very roadways we traveled upon. Along the way, we beheld the many acres of corn planted to help sustain the wildlife by allowing them to fatten for the influx of winter.

Tourists were disheartened to see that the decade-old eagle’s nest had partially collapsed due to the tree branch supporting it giving way but were enlightened to hear that the resident pair had already begun to rebuild prior to leaving the area for winter’s freeze.

After pulling away from the infamous Q area and its multilayered protective fencing, which still stands ominously intact today, the wagons ventured toward an abandoned detonation field. When active, vibrations felt from bomb detonations here were reported by residents up to 35 miles away!

Nearing the end of our journey, just when there was a lull in the anticipation of being able to see any white whitetail this day, a pair of white does along with a couple brown whitetails entertained with a little canter, as if for our eyes only. Hearts were uplifted, but the coup de grâce came when hushed voices carried in domino effect down the length of both wagons sharing the spotting of a white buck lulling in the brush. Sure enough, huge rack visible, this glorious creature lounged staring at us as we stopped to admire him. Finally, he stood and sauntered away, much to the delight of his audience.

All agreed there was no better way to close the 2nd Annual Open Air Wagon Tour than that as participants disembarked with hopes of an encore performance next autumn.

Dee Calvasina is a freelance writer and monthly columnist who supports the conservation of nature and all wildlife at Deer Haven Park, LLC. To keep abreast of upcoming events, visit deerhavenpark.org, like them on FB, or call 8-DEER-TOURS (833-378-6877).