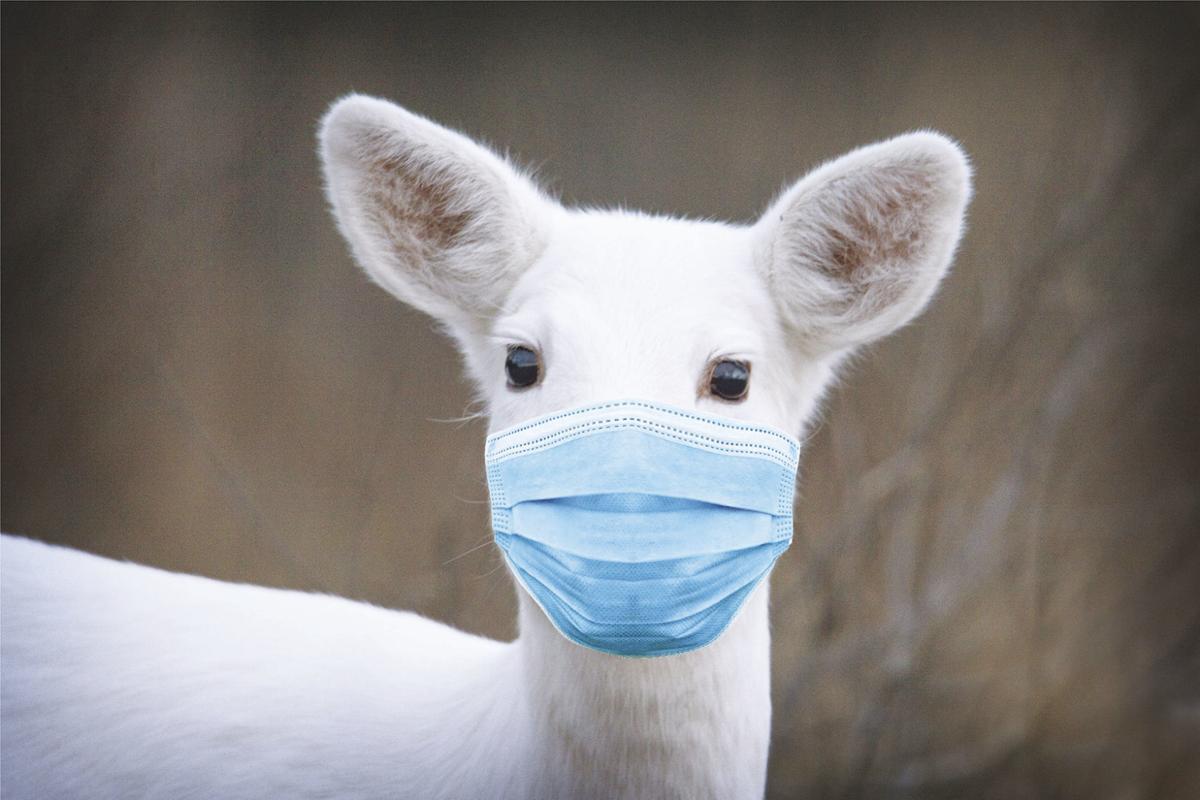 This is a photoshopped image of what a white whitetail at Deer Haven Park might look like during the COVID-19 pandemic.

Who likes change, honestly? We are creatures of habit, after all. However, we live in a world of constant change. Seasons come and go, as do wars, famines ... pandemics ... but there are still some things that remain steadfast and true. The integrity of the human spirit, the resilience of nature, and the innate propensity for survival evident in all of wildlife are but a few to top that list.

Everyday history makes its mark, and the land beyond the fence at Deer Haven Park, nestled on the former Seneca Army Depot property, has certainly witnessed much. If this vast terrain could speak, what an epic tale it would share!

From Native American settlements throughout the Revolutionary and Civil wars, this resilient acreage has experienced scaring upheavals of change. Later, it bore witness to peaceful, earth-caring families being dispossessed of their homesteads. As if the callouses from its prior ravishing were not enough, Earth’s bounty birthed from these families’ nurtured farmlands were once again scorched, trampled, decimated. Next, massive steel and cold cement structures created the Seneca Ordinance Depot, with WWII soon prevailing.

Temporarily defeated, nature nonetheless donned this new man-made apparel and began to again reinvent itself. Thus, the natural powers that be, in true survival mode, saw fit to enhance a single recessive gene inherent in the whitetail deer to produce a miracle of sorts. The white, whitetail deer was born and the military fences that were meant to keep the enemy at bay had now served a new purpose — to keep a blessing contained. Factor in the conscientiousness of the Army commander, and you had a safe haven for these creatures who relied on that human spirit to keep them abundant and healthy.

Many more decades of wars, environmental changes, and wildlife generations unfolded until the human element dispersed. The land, rather than to emit a disheartened energy, chose to flourish with new growth of trees and wildflowers, inviting wildlife to thrive. Resilience.

The white deer continued to reproduce, its numbers increasing. Propensity.

A community that held fast to a love of nature and the white deer cried out for preservation and conservation, and Deer Haven Park, was established. Integrity.

Recently, change challenged existence as we know it once again. The property experienced a lull in human interaction via visitors what with the recent social distancing requirements of a viral first part of 2020. The largest herd of white whitetail deer in the world, however, has gone about their daily lives unperturbed. These magnificent creatures, which have been revered by our ancestors and remain to inspire and enlighten every human heart, have again persevered yet another historic, world-altering event and are currently birthing their young beyond the fence.

As with the upkeep of any wild animal and nature preserve, the human element involved behind the scenes has consistently marched onward with the planting of numerous crops and trees to sustain a healthy wildlife population.

It is said that good things always arise from dire situations, and that change can occur with positive purpose. This most recent reprieve from the norm has allowed time for park officials to ponder enhanced and exciting ways for visitors to peacefully tour and enjoy the beauty of nature, the wonderment of all the park’s wildlife, and the majestic white deer.

Yes, another new chapter in the ongoing saga that encompasses the vast acreage of Deer Haven Park. Assuredly, a story of which you will wish to be a part. Ever changing sights, and new wildlife generations await your arrival. Come, embark on your journey beyond the fence, and make history.

Dee Calvasina is a freelance writer and monthly columnist who supports the conservation of nature and all wildlife at Deer Haven Park, LLC. Tours are coming soon. To show your support of these ongoing efforts, visit deerhavenpark.org, look them up them on FB, or call 8-DEER-TOURS (833-378-6877).

What do you think about Major League Baseball opening with a reduced 60-game season?

NOTICE TO BIDDERS NOTICE IS HEREBY GIVEN